The temperatures are rapidly dropping, the frost is encroaching and much of the natural world is dying back, finding crevices and tunnels for hibernation or rapidly vacating the province. There's still some time to go before winter has truly arrived, but it is becoming more and more apparent every day that we're almost there.

I've had much less time than I'd like to enjoy the latter part of the fall with school commitments, and I've not been finding too much when I do get out, so have not been able to post much recently. I'm planning to spend some time enjoying birds I won't see again until March or April as well as some recent winter arrivals this weekend though.

Regardless, here's some interesting wildlife I've come across in the past month or so. 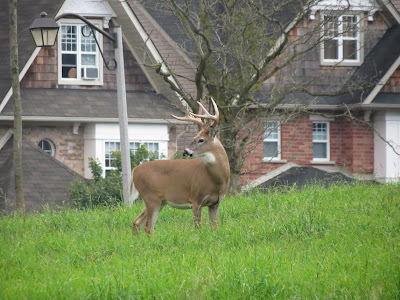 White-tailed Deer have been incredibly successful at colonizing urban areas. I was happy to see this buck two minutes from my front door in Guelph. Only a few species of odonates persist in any numbers into October. Spotted Spreadwings like this one are one of the characteristic late fall species, along with Familiar Bluet, Common Green Darner, Shadow Darner and Autumn Meadowhawk. 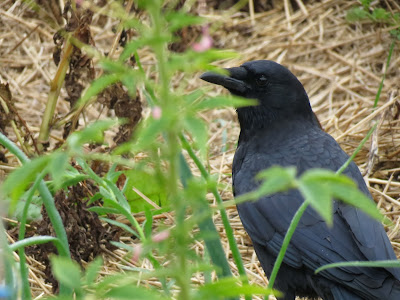 American Crows, despite their abundance in many areas, are surprisingly difficult to get close to. I'm not sure why this one was so tame.

Posted by Reuven Martin at 9:30 PM No comments:

Last weekend the University of Guelph Wildlife Club headed down to Long Point for some end-of-season herping and fall birding. When we first arrived at Old Cut on Saturday morning it didn't look like it was going to be a great weekend for seeing much - there weren't a lot of birds around the woodlot and the rain looked imminent. The rain held off though, and we soon started picking up some cool sightings.

A few of us spend a few minutes watching birds moving around over the marshes, and quickly picked up Peregrine Falcon, Merlin, Sharp-shinned Hawk and Northern Harrier. It ended up being a great weekend for raptors despite the poor conditions for migration, with the following seen:

Seeing a Peregrine is always a highlight, so 5 in one weekend was certainly a treat. 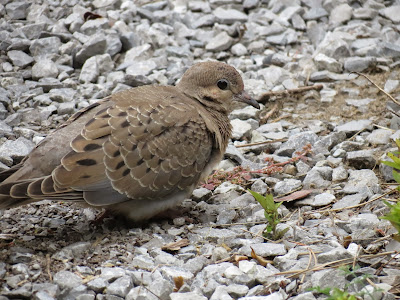 This very tame Mourning Dove was hanging around the banding lab at Old Cut. Hopefully it is a little more fearful of the numerous raptors than it was of us!

We were camping in the Provincial Park nearby, and as we were getting our permits I spotted a huge insect flying weakly across the lawn. When I went over, it was exactly what I expected - my first Chinese Mantis! While the smaller European Mantis is a common sight across Southern Ontario throughout the fall, the Chinese Mantis is restricted to the extreme south of the province and is not as common even there. We ended up seeing three of these beasts (known to eat hummingbirds) over a day and a half. Both of these species have been introduced in probably misguided attempts to control garden pests.

On the subject of enormous insects, this huge Pandora Sphinx Moth caterpillar was feeding on grapevine directly over our heads. 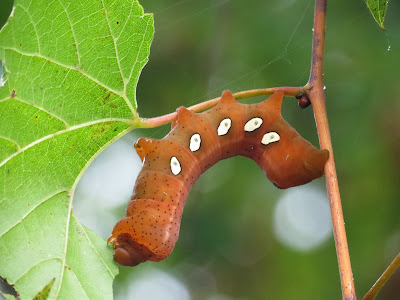 As we entered the campground, it became immediately clear that our initial assessment of there not being many birds around was flawed. Huge numbers of Yellow-rumped Warblers were filtering east through the large Eastern Cottonwoods on the south side of the peninsula. I estimate that we saw 1500 individuals that day, but there were likely hundreds of thousands of birds along the entire peninsula.

The rain, despite forecasts, held off for the entire weekend, and as a result we had much better luck than expected with herps.

First off was this hatchling Blanding's Turtle - egg tooth still attached! I've seen lots of adult Blanding's but this is only my second small one. 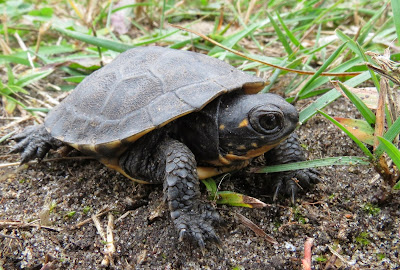 Not long after we came across two very small Eastern Fox Snakes. I've seen a number of large fox snakes but never one this small. 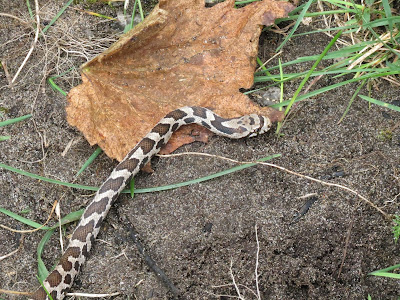 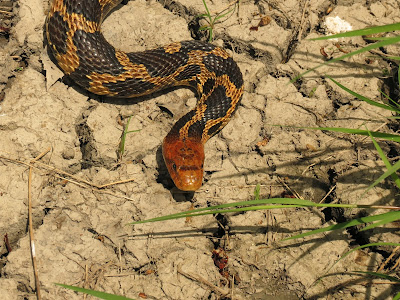 for comparison, adult Eastern Fox Snake from Pelee Island in May.

We hit the jackpot the next day though, with this Hatchling Spotted Turtle! This is my first ever Spotted Turtle, something I've wanted to see for a long time! 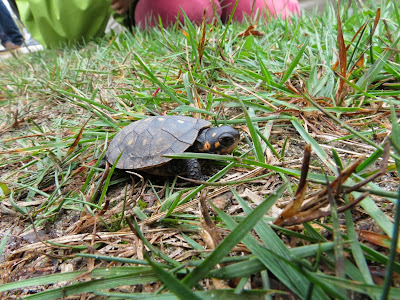 Other herps seen included Green, Leopard and Bullfrog, American Toad, Snapping and Painted Turtle and Garter (both normal and melanistic) and Brown Snake.

On Monday, a Brown Booby, normally found no closer than Florida, was discovered at the beginning of the Niagara River, at Fort Erie, Ontario and Buffalo, New York. This is one of the most unlikely birds to ever occur in Ontario. Needless to say, I wanted to see it! Unfortunately, I had school commitments on Tuesday and Wednesday, but on Thursday 5 of us drove down to Fort Erie, arriving at 9 am.

We waited with a number of other birders, scanning constantly for the bird to show up. After four and a half hours we hadn't seen the bird or much else, but at about 1:45 pm Rohan van Twest motioned me over to his scope and there it was, sitting on the pier 2 km away on the New York side of the river. Although we got adequate looks through scopes, the distance made photography impossible. Here's my best effort: 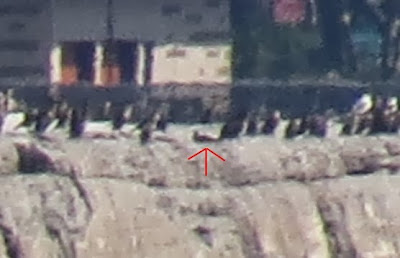 It isn't really identifiable from this shot, although you can see that it is a somewhat smaller bird with a horizontal posture and brown plumage compared to the black plumage and upright posture of the nearby cormorants.

Jim Pawlicki got some much (much) better pictures from a boat on the New York side.

For a better idea of what it actually looked like while we were watching it, check out Mark Dorriesfield's video.

After watching it for a while, it suddenly took off and flew incredibly quickly out to the lake. From the distance it covered I'd estimate it was going well over 100 km/h!

What an incredible bird!
Posted by Reuven Martin at 4:42 PM No comments:

Swallows having trouble in the cold

Back in May, we had a cold snap mid-month with strong winds and temperatures barely above zero for several days in a row. I discussed the effect this had on the warblers in a post earlier this year, but one group of birds was hit even harder by the cold snap: swallows.

Swallows are extremely good at what they do - hoovering up flying insects. Unfortunately, this comes at a price, and that price is that they are utterly incompetent at virtually everything else. So when unseasonably cold temperatures and strong winds ground most of their prey, swallows have little choice but to eke out enough to survive from whatever is left. This often means travelling to warm sheltered water bodies - a perfect description of your typical sewage lagoon.

When I first arrived at the Blenheim Sewage Lagoons during the cold snap, it was immediately obvious that the swallows were having trouble. A number of individuals were dead on the road from cars, and several more were sitting on the road exhausted. Once I climbed the dike to get a look into the lagoons themselves, I saw an impressive spectacle: 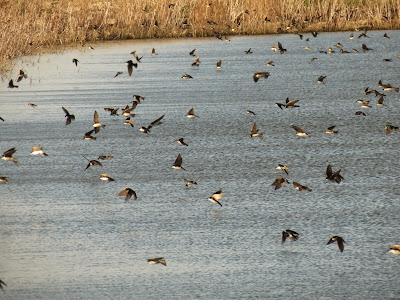 Huge numbers of swallows (mostly Trees) were feeding just over the surface on the leeward sides of the larger ponds, with lots more resting exhausted on vegetation and the ground around the ponds. 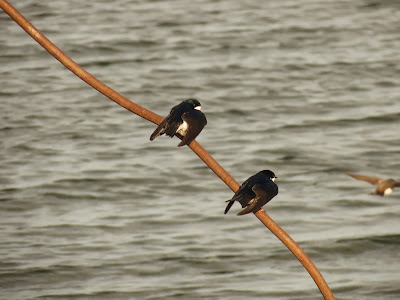 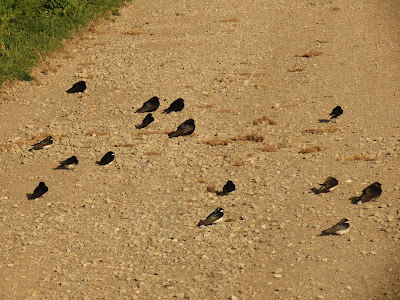 Interestingly, all the Purple Martins were perched. I assume that, being much larger than the other swallows, they weren't able to get enough energy from feeding to even replace that used by flying.

Two larger birds were mixed in with the swallows: Black Terns! One can be seen in the video below, apparently foraging for flying insects just like the swallows. Apologies for the poor video quality - the wind was so strong that it was impossible to hold the camera steady, even laying down.


I estimated about 1500 swallows the first time I visited, and 2000 on my second trip the next day. You can see exact numbers and the other birds I saw at the eBird checklists below:

Luckily, the cold eventually left and most of the birds seemed to survive. I'd hate to have seen what would happened to the swallows and all the other insectivores with another couple of cold days. Given that this didn't happen, this experience was one of the highlights of my spring.
Posted by Reuven Martin at 10:43 PM No comments: