From a birder's perspective, the Bruce Peninsula is a great spot, but one bird stands out: Brewer's Blackbird. Although a reasonably common breeder on the peninsula, they are otherwise very rare in Southern Ontario. As I'd never been at the right time of year, Brewer's Blackbird was a much anticipated lifer.

Our first pair was right along Highway 6, sitting on the fenceposts along the road. 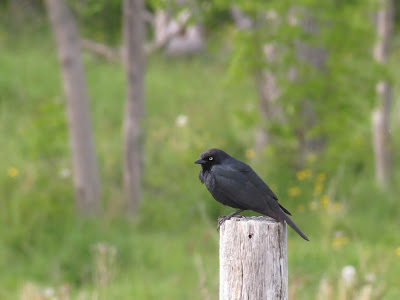 The males are very glossy overall. I was surprised how big and long-tailed this species appears. 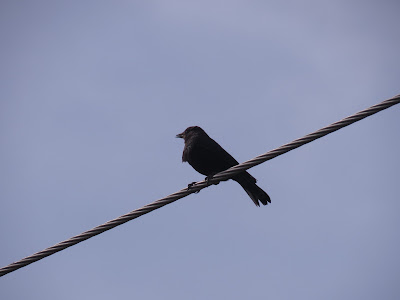 While watching the blackbirds, I noticed the female carrying nesting material to the base of a small bush. Sure enough, there was an almost-completed nest only a couple of metres away from the busy highway! 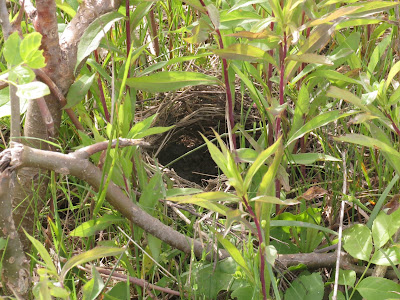 Upland Sandpiper is an increasingly hard bird to find as their habitat disappears, so I was glad to get excellent views of a couple very early in the morning. Although it is a shorebird closely related to Whimbrel and curlews, Uplands have no real association with water, and spend most of their time in long grass. 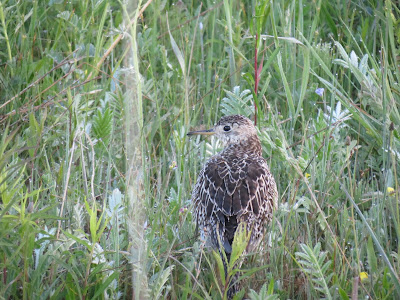 Sauble Beach is one of the location where Piping Plovers are now nesting in Ontario. At least three pairs are already nesting, and there's a chance of more to come as there are also three lonely males on the beach. We saw six birds, which is pretty impressive considering the Great Lakes population has had as few as 12 nesting pairs in the past. 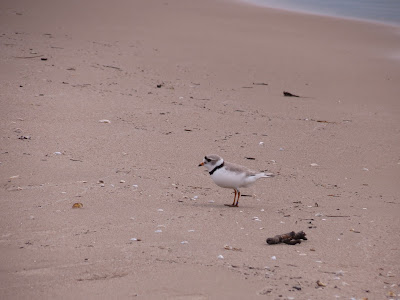 Posted by Reuven Martin at 9:53 PM No comments:

Carnivorous Plants on the Bruce Peninsula

One group that is always fun are the carnivorous plants, a number of species of which are found in wet, nutrient-limited habitats like bogs and fens across Ontario. These habitats are common on the Bruce Peninsula and we saw a variety of species.

We found Common Butterwort, a new species for me, growing along seeps and the outflows of small streams on the rocky shores of the Lake Huron side of the Bruce Peninsula. The greasy leaves trap small insects which are digested for their nutrients. 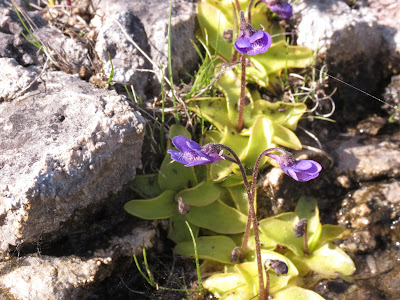 Similarly, the sundews trap insects on their sticky leaves. This is Linear-leaved Sundew, a new species for me although it seems to be the most common sundew on the Bruce Peninsula. The Round-leaved and Spatulate-leaved Sundews I see in Algonquin Park have much shorter, broader leaves. 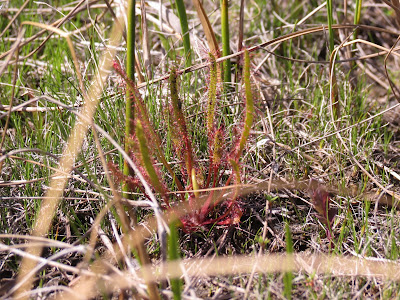 The most spectacular of our carnivorous plants is definitely the Pitcher Plant. The slippery pitchers drown and digest insects, and are often large enough to be seen from quite a distance away in bogs. This is what they normally look like (this photo is from several years ago in Algonquin as the specimens there are generally much nicer than those we saw on the Bruce): 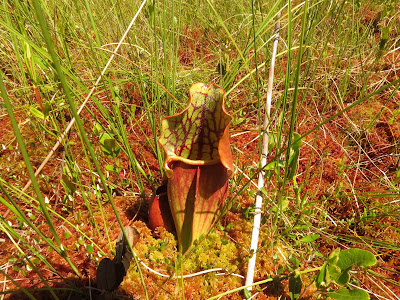 You might be a little surprised when I tell you that the largest leaves in this photo below also belong to a Pitcher Plant: 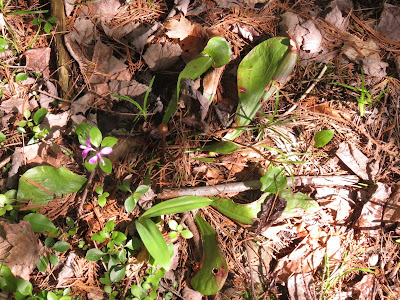 I came across this odd plant growing in a partially-shaded coniferous forest, and quickly realised that it was a very strange Pitcher Plant. Note the uppermost leaf that does have a very small pitcher opening.

Pitcher Plants normally grow in bogs, where sunlight is abundant but nutrients are scarce. The individual above, in atypical habitat with ample nutrients but less than full sun, has grown broad leaves to catch the sun rather than pitchers for extracting nutrients from insects. I'm surpised it managed to get established here and I find it very impressive for a plant to be able to adjust it's growth habits this much.

Well doing some research I came across this fantastically well-written and comprehensive website about carnivorous plants. Highly recommended if you have any interest in this fascinating group.
Posted by Reuven Martin at 10:39 PM 4 comments:

One of the most sought-after groups of plants in Ontario (and all over the world) is the orchids. They are highly diverse, many species are strikingly beautiful, and many are very hard to find.

The Bruce Peninsula is perhaps the best place in North America for seeing orchids, with 54 recorded species (although quite a few of these have only been seen a handful of times). As such, one of our main goals on visiting the Bruce last weekend was to find a nice variety. Orchids bloom at staggered intervals throughout the summer, and our visit was a bit earlier than would be ideal, but we still managed to find four species as complete beginners at the task of orchid hunting.

I'm going to cheat a litte here and add a fifth species. Although Showy Orchis is found on the Bruce Peninsula, we didn't see any, and this photo comes from Rondeau in May. Showy Orchis is a species found scattered in rich deciduous forest. 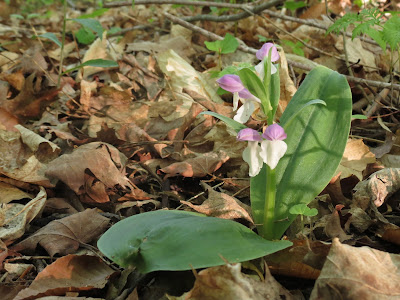 The well-named Yellow Lady's Slipper is abundant on the Bruce Peninsula. Two varieties are found here: a larger one in drier open areas and a smaller one in shadier wet spots. Both are common and line the roadsides and trails in some locations. 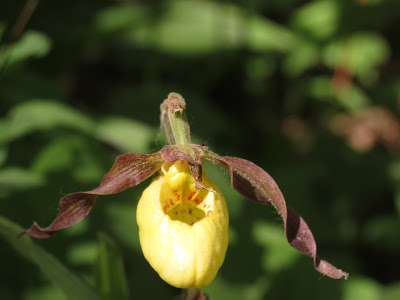 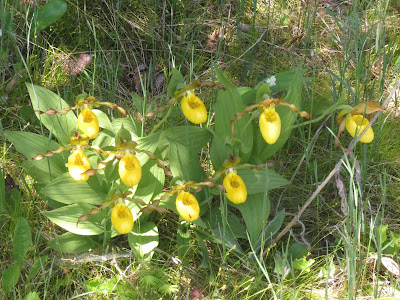 Three other species of Lady's Slipper Grow locally but we were only able to find one. Luckily, it was the best of the bunch - the tiny and exquisite Ram's Head Lady's Slipper. This species is rare throughout its northeastern North American range.

Like all orchids, these Lady's Slippers produce huge numbers of miniscule seeds. Most will never germinate as they require an association with a fungus to provide the energy to get started. For the same reason, orchids are very difficult to cultivate. 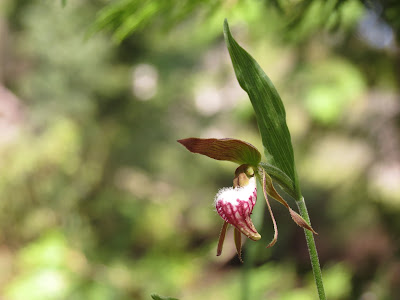 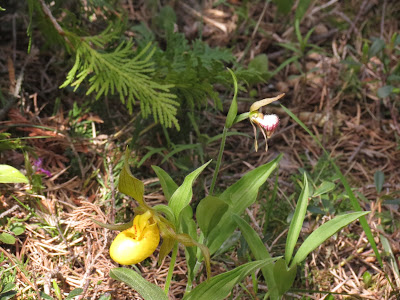 A variety of coralroots can be found on the Bruce Peninsula, with the most common at this time of year being the Striped Coralroot. Most coralroots have no leaves or chlorophyll, and obtain all their energy from associations with underground fungi. 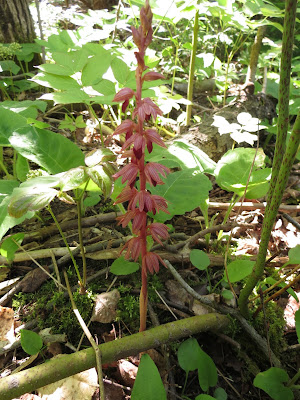 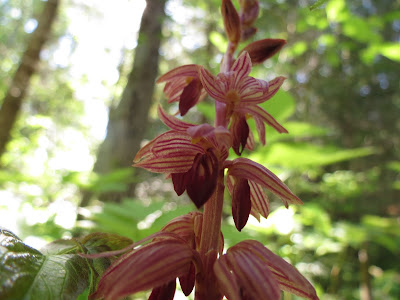 Although our final species of orchid doesn't bloom until late summer, it has easily recognized leaves. Menzies' Rattlesnake-Plantain has dark evergreen leaves with a pale stripe down the middle. Note the brown spike of seed capsules from last year. Any given plant will not flower in most years, and of the dozens of individuals we saw only one had retained seed capsules. 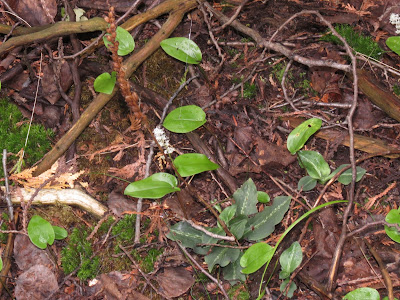 Much of the information in this post came from the book The Orchids of Bruce and Grey published by by the Owen Sound Field Naturalists. Despite the limited geographical scope, this slim guide is a great resource.
Posted by Reuven Martin at 10:51 PM 3 comments:

I've had some amazing luck in the last month or so with snakes in Ontario. I never really get tired of snakes - even Garter Snakes make me pause quite regularly.

This large Eastern Fox Snake below was crossing a trail in Rondeau during May. This species is one of a number of Ontario reptiles that has small remnant populations in Southwestern Ontario but in Ontario is mostly found found around Georgian Bay. I have seen many Fox Snakes on Pelee Island but this is my first for Rondeau, where they are found at much lower density. 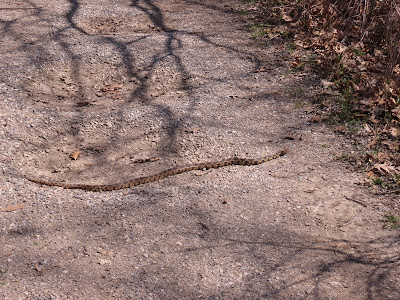 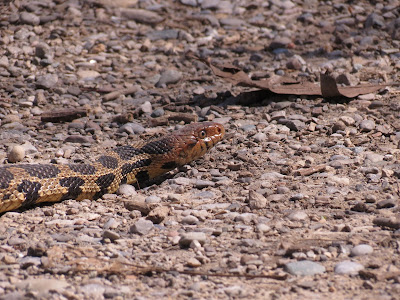 Speaking of low density, perhaps the poster species for the term would be the Eastern Hognose Snake. This species is quite widespread in areas with sandy soil, but is almost never found in any numbers. I've spent many hours searching for this species around Ontario, and finally spotted this large individual, my first, in Norfolk County last weekend. 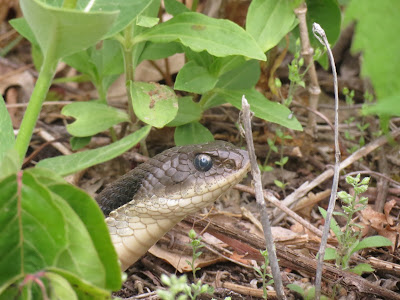 The upturned snout is used for digging in sandy soil. It isn't clear to me what keeps them from using non-sandy areas, as their primary prey of toads is abundant in any natural habitat. 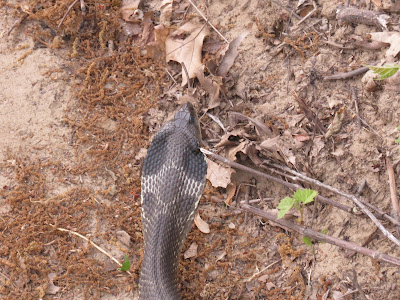 When threatened, hognoses puff up like a cobra and become quite aggressive, but apparently rarely or never actually bite.

Eastern Massassauga Rattlesnakes are Ontario's only venomous snake, and although they can be reasonably common in the right areas, I have seen very few as I am rarely in the right parts of Ontario. As such I was happy to this one in Parry Sound District in late May. 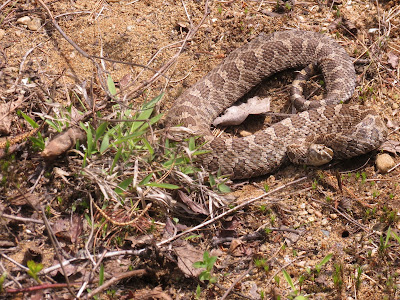 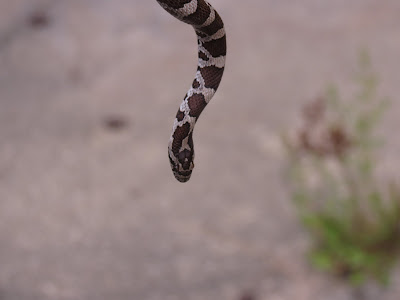 I found this young Eastern Milksnake under a rock on the Bruce Peninsula. Within 10 metres of it we also found 7 Ring-necked and 4 Garter Snakes! 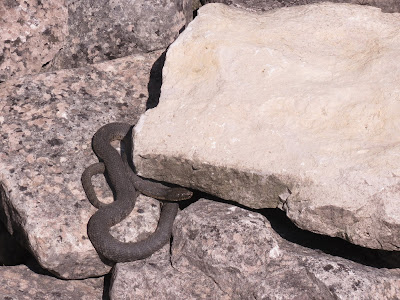 Unlike the four species above, Northern Watersnake is a common and widespread species across all but the most agricultural parts of Southern Ontario. They can be very common on rocky lakeshores like this one on the Bruce Peninsula.
Posted by Reuven Martin at 8:41 PM No comments:

I just got back from an amazing three-day trip to the Bruce Peninsula with my girlfriend. I've barely started going through the photos, but as I'm piling up interesting sightings faster than I can write them up for this blog, I wanted to try to get something up right away. Here it is: a trio of awful photos of interesting fish from Bruce Peninsula National Park: 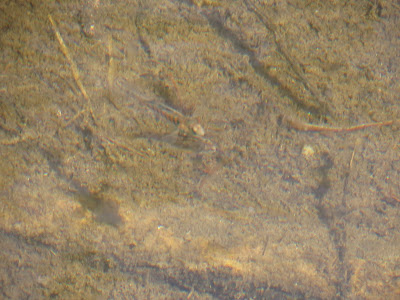 The darters are a colourful group of little fish, and one of the most spectacular is the male Iowa Darter, somewhat visible next to the brown female in this photo. To see what they really look like check out this link. We got good looks through binoculars but neither my camera nor my photography skills were up for the task! 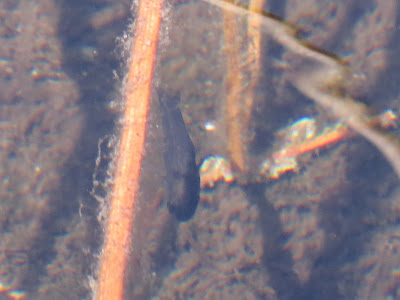 Sticklebacks are tiny fish with intensely complex spawning behaviour, where males build a nest and then display to a female to get her to use it. Males like this one may turn black during spawning, but are inconspicuous and brown the rest of the year. I'm not sure whether this is a Brook or a Ninespine Stickleback. 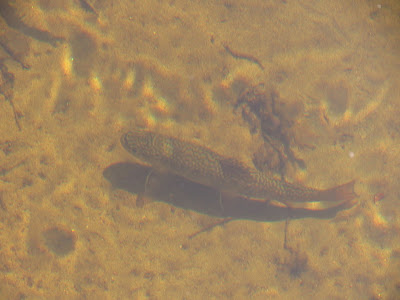 Brook Trout are often better known as Speckled Trout based on the distinctive back pattern. Although they are popularly fished, I rarely see this species so was pleased to get good views of several small individuals in this clear pool.
Posted by Reuven Martin at 11:28 PM No comments: