Normally by this time of year, it is very clear that spring is on its way. Waterfowl, crows, gulls and the first robins, starlings and blackbirds should be arriving. This winter, by far the coldest, snowiest and longest I've ever experienced, shows no signs of letting up.

I have still been getting outside now and then, and there are a few signs of spring. Chickadees, House Finches and cardinals are singing on every sunny day, woodpeckers are drumming, and I've seen a few chipmunks and a groundhog.

Depending on what I see, I may not post again until we get warmer temperatures, but here's a few of the birds I've come across in the latter half of February. 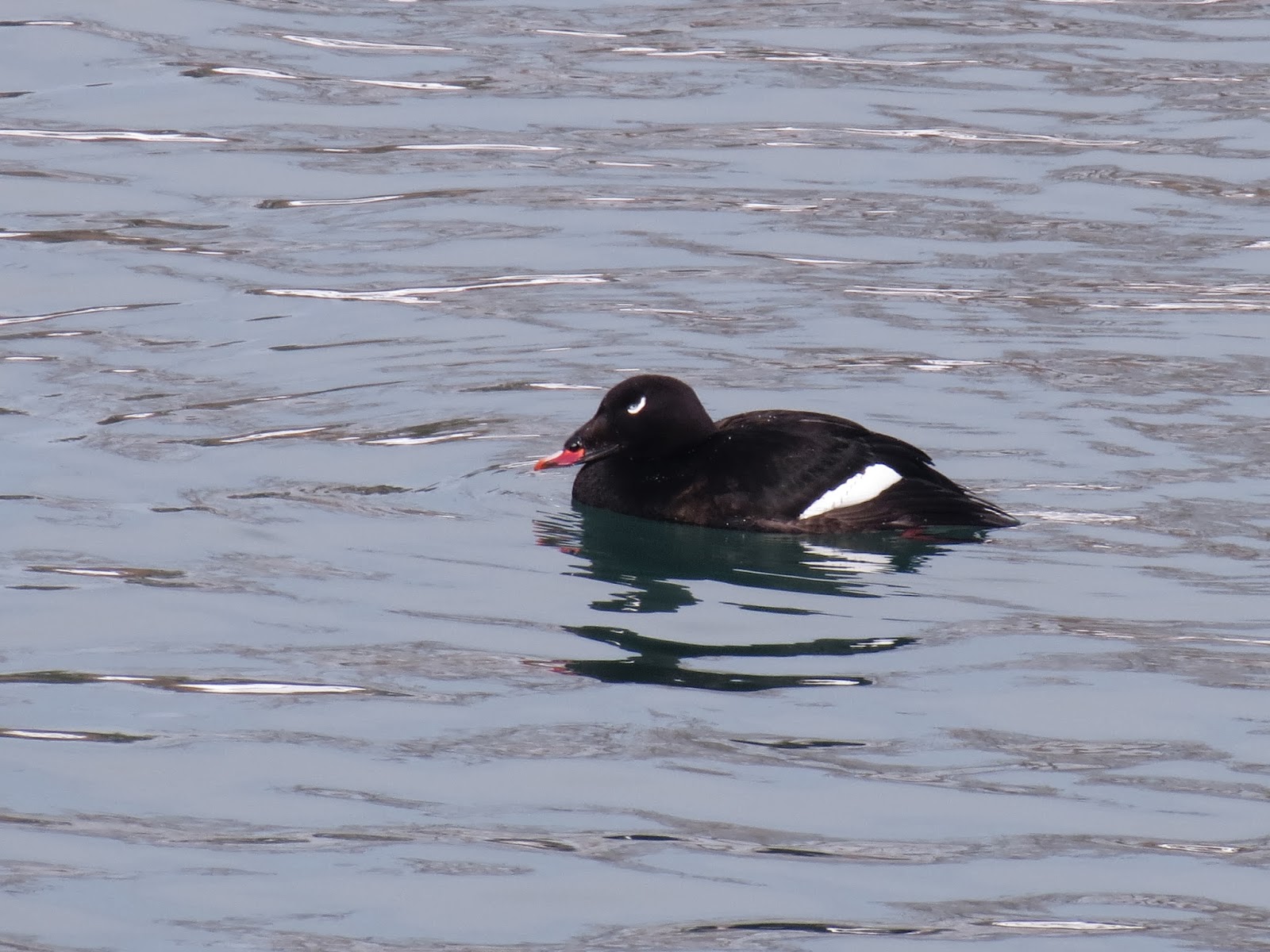 Ducks continue to be a big story on inland rivers across Ontario as open water remains scarce. Even on Lake Ontario, the differences are apparent, as White-winged Scoters seem to be present in larger numbers and closer to shore than I've seen in the Oakville to Etobicoke area before.

Not as pretty as the male, but I found this female White-winged Scoter on the Speed River in Guelph. This is the first "real" winter record of this species for Wellington County. Although there have been a few sightings into mid-December on large bodies of water like Guelph Lake and Mounstburg Reservoir, this is the first sighting after those areas freeze. 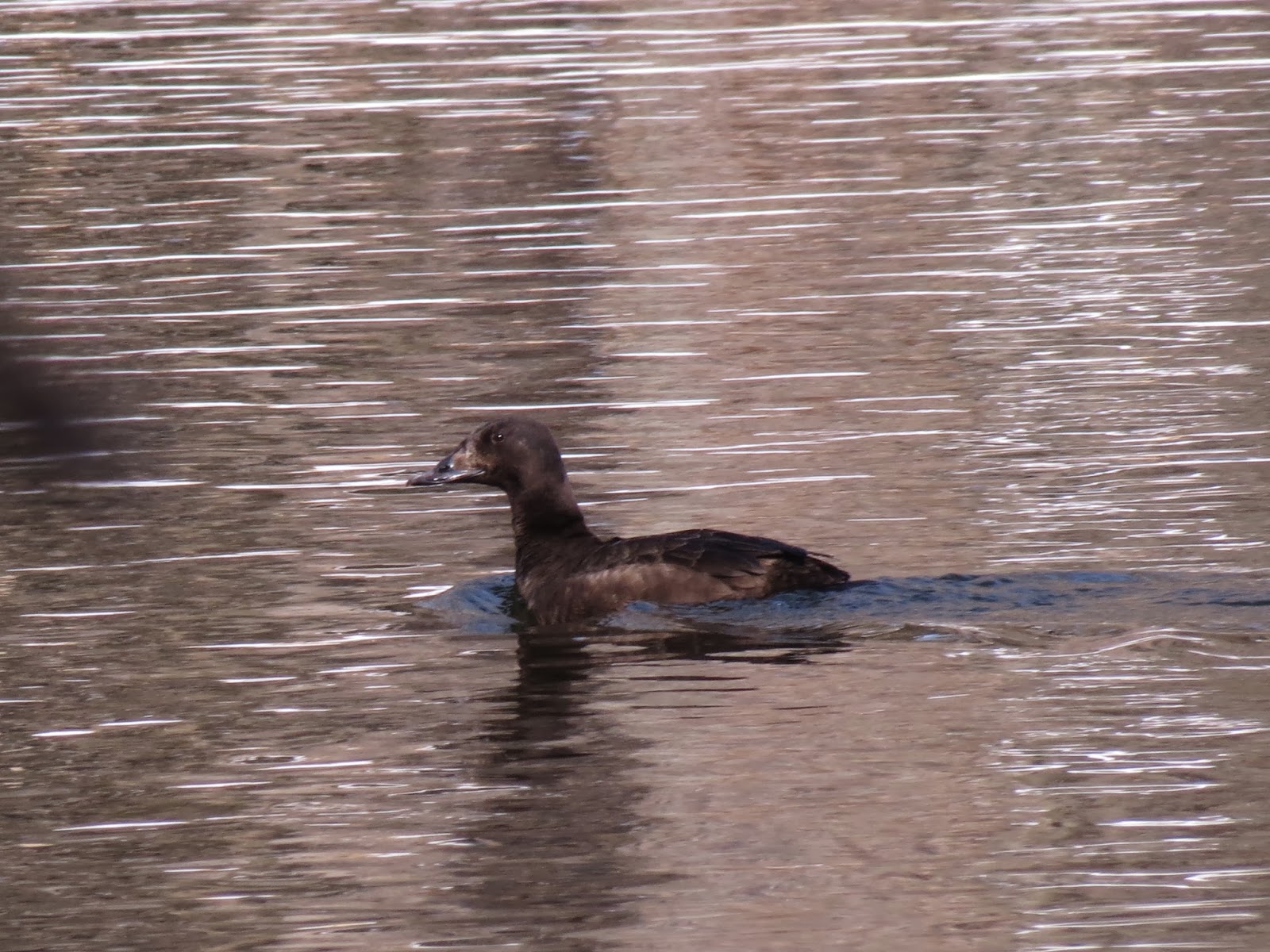 Other unusual to rare ducks continue on local rivers: 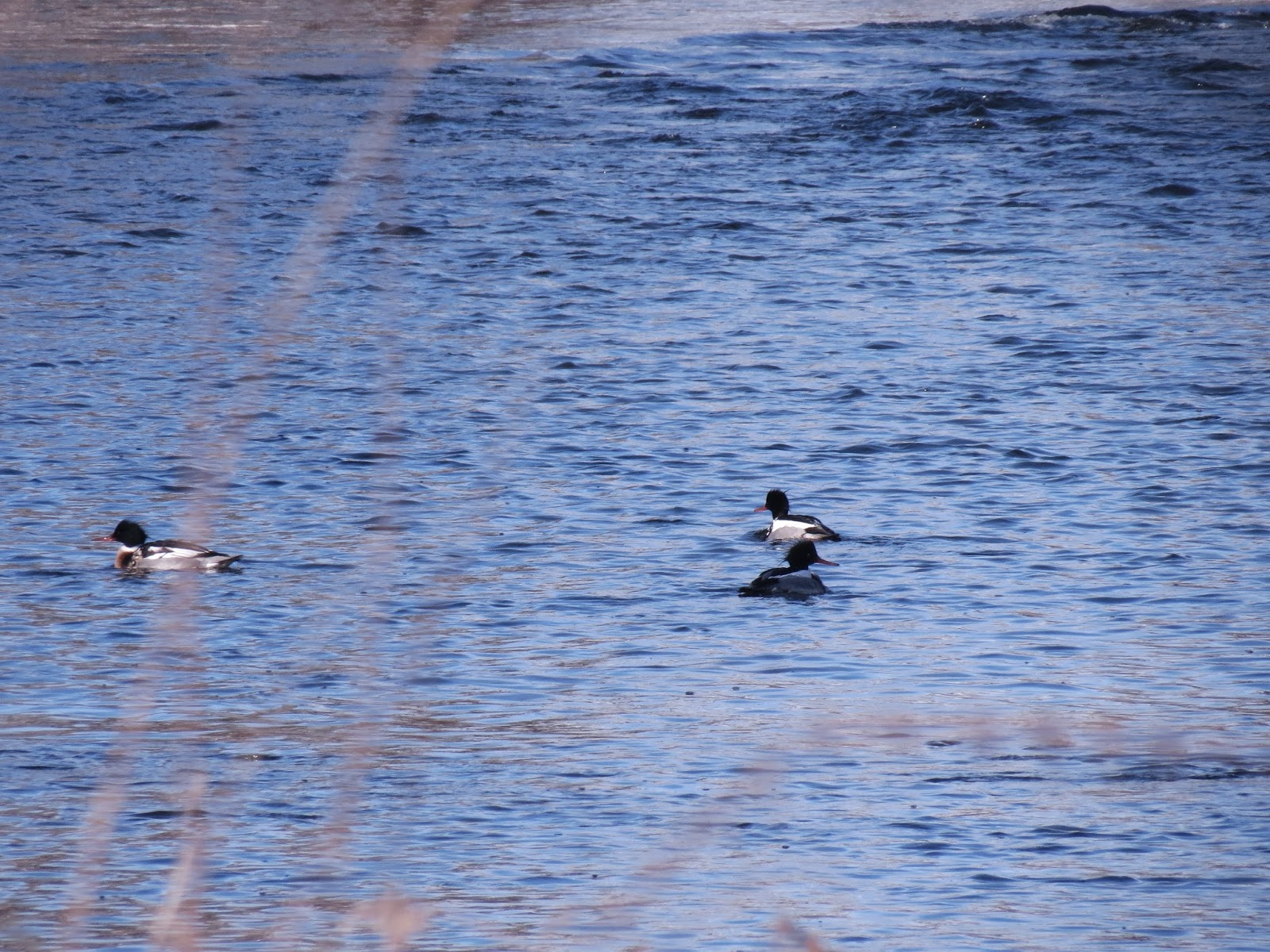 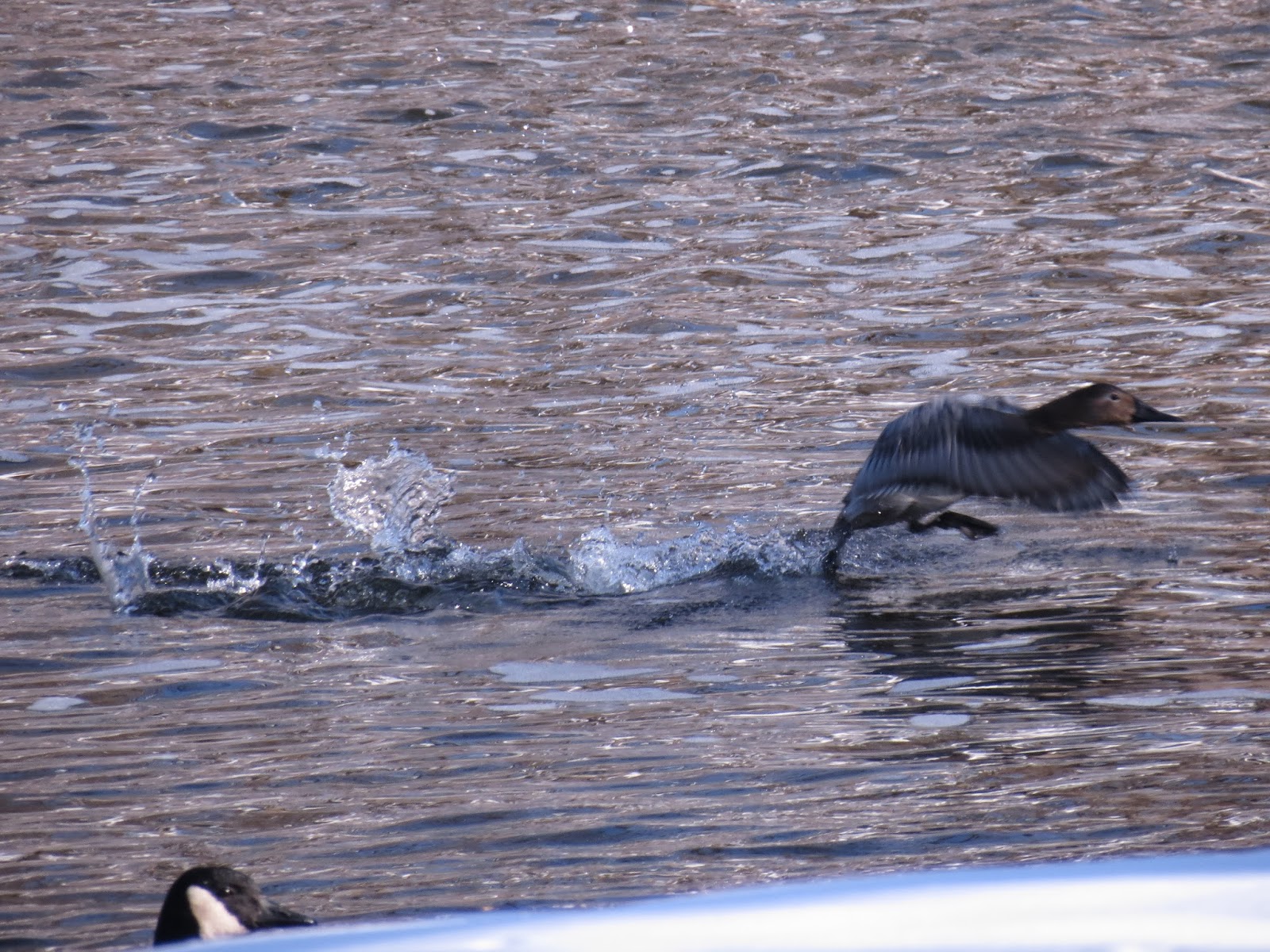 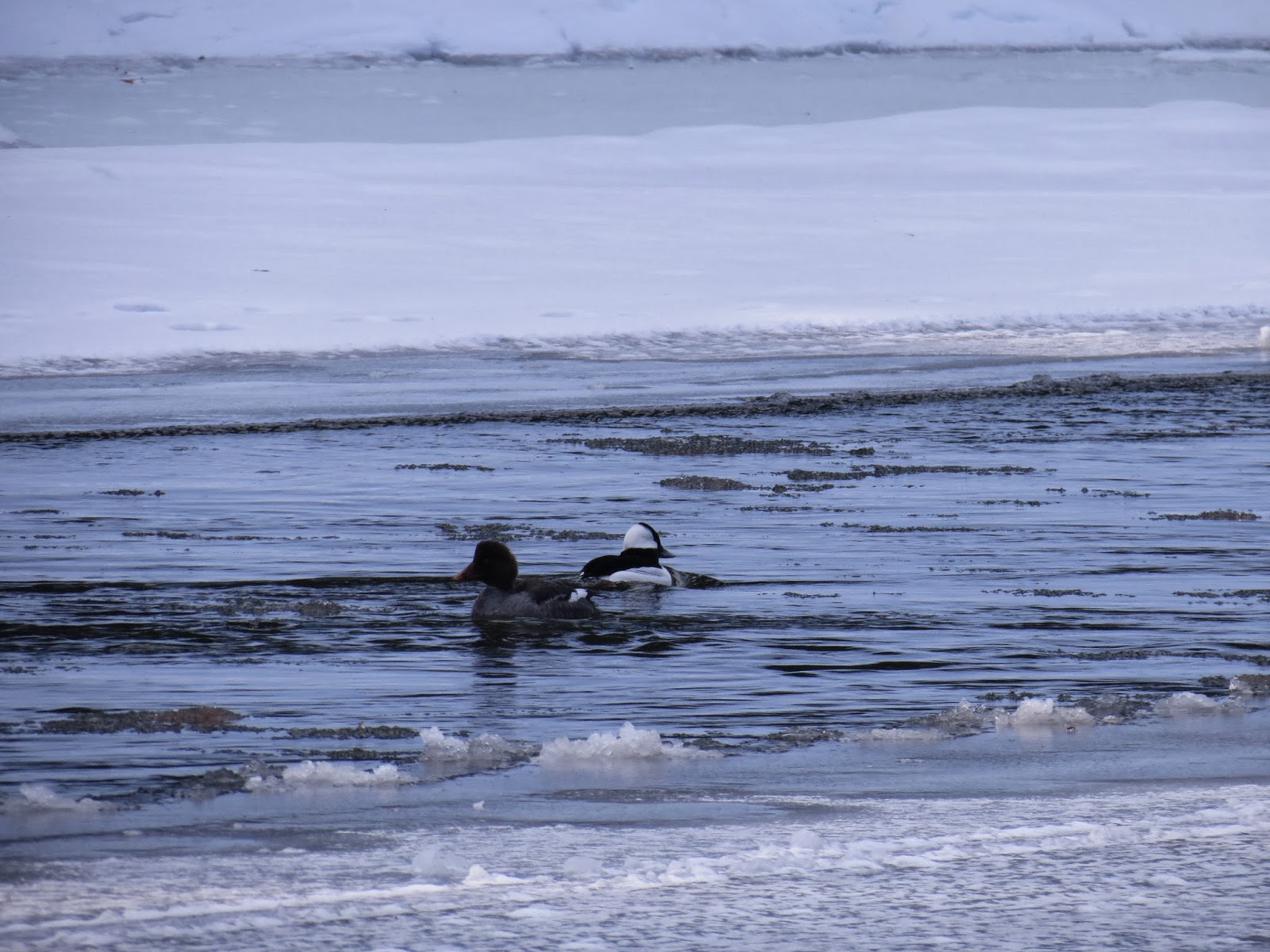 Snowy Owls continue throughout the area. I came across three between the 19th and 22nd of February. 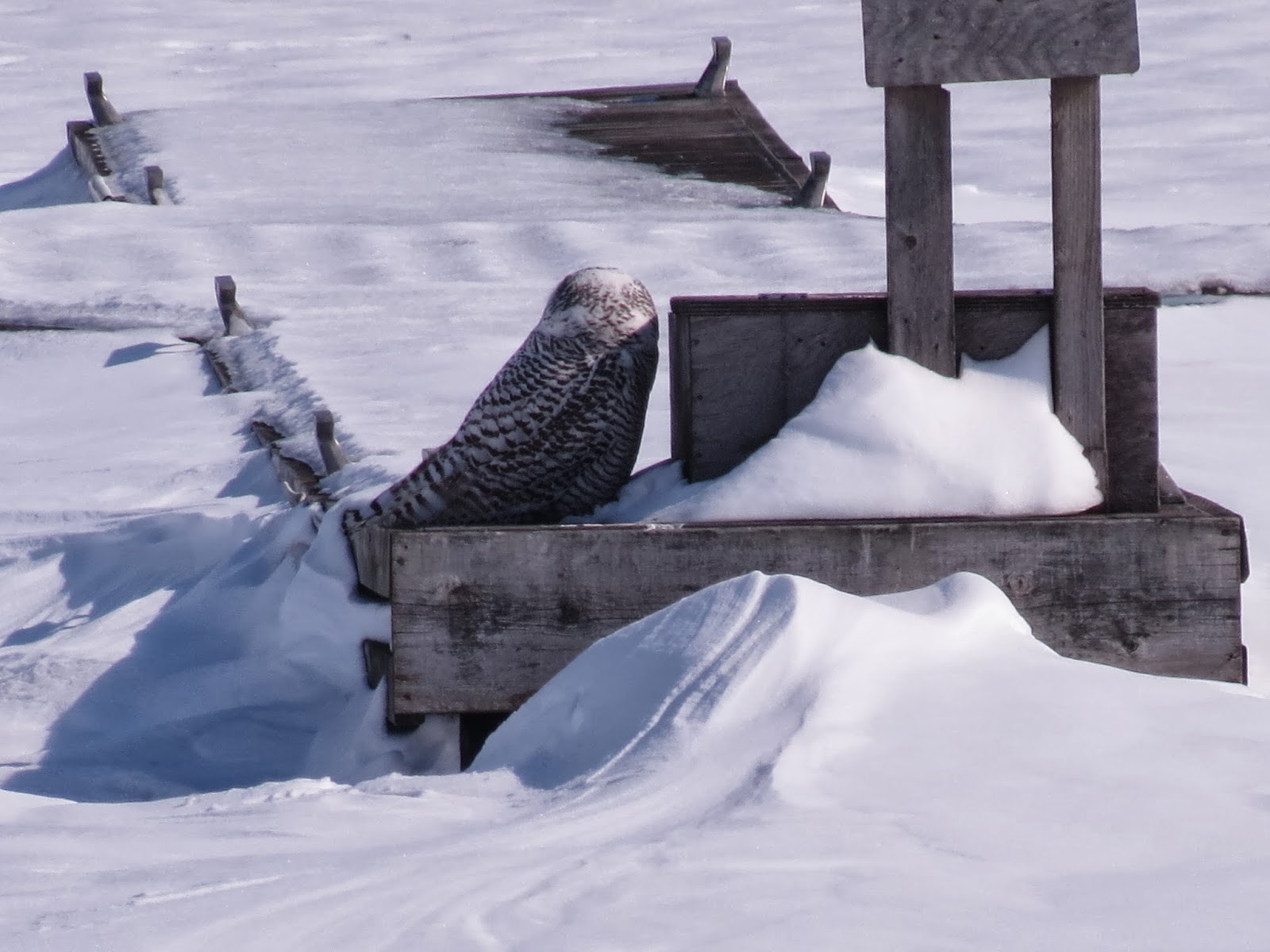 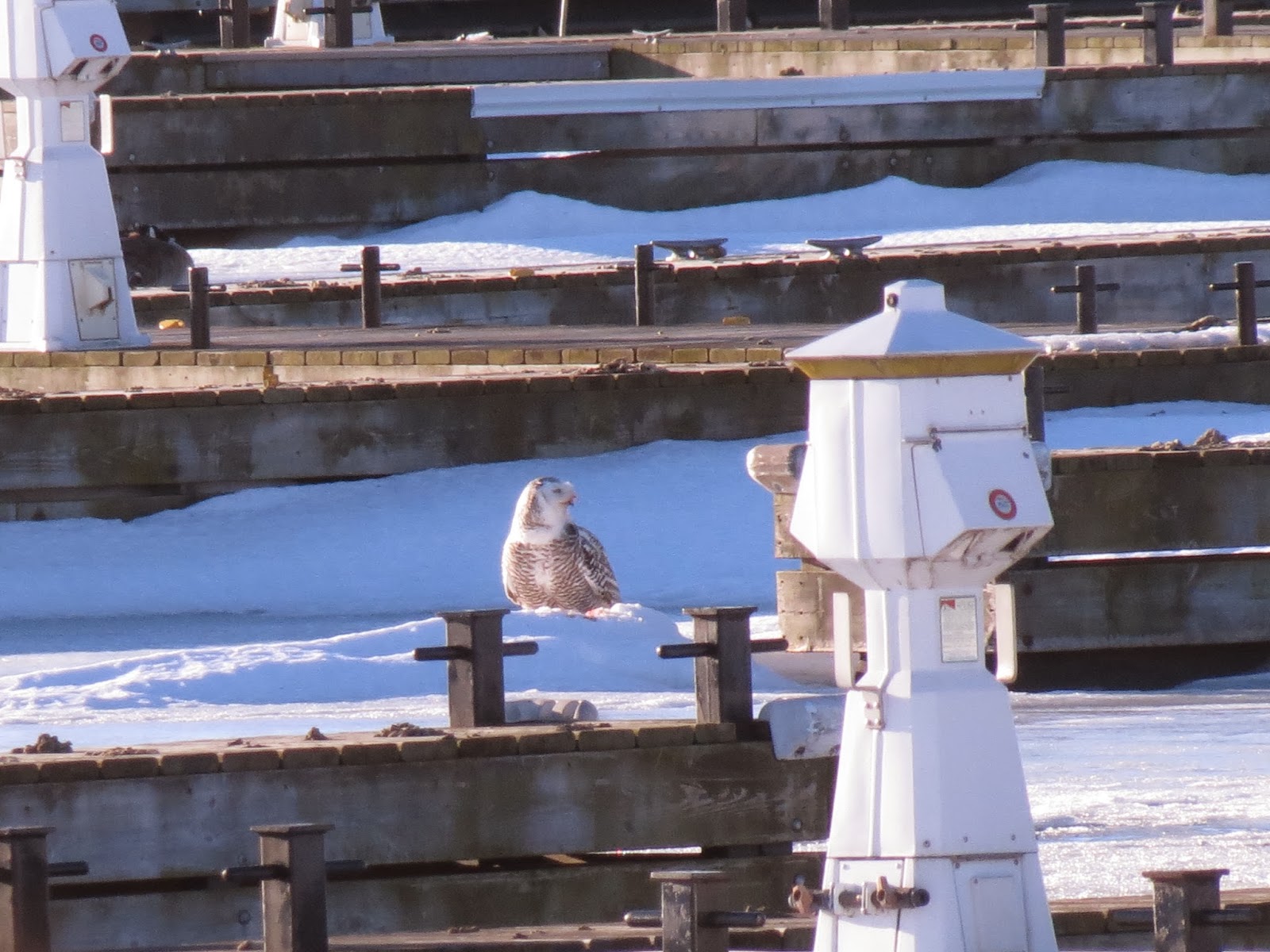 The second owl, a long-staying bird at Bronte Harbour in Oakville, has an interesting story attached. After checking the usual vantage points I was unable to see the owl (although a female King Eider was visible not far out on the lake), so decided to walk to the other side of the marina in the hopes it would be sheltered against the docks in the vicious wind.

As I walked along the shore, the owl suddenly flushed up in front of me and carried a duck carcass out to the marina. Here's what it looked like where it was sitting: 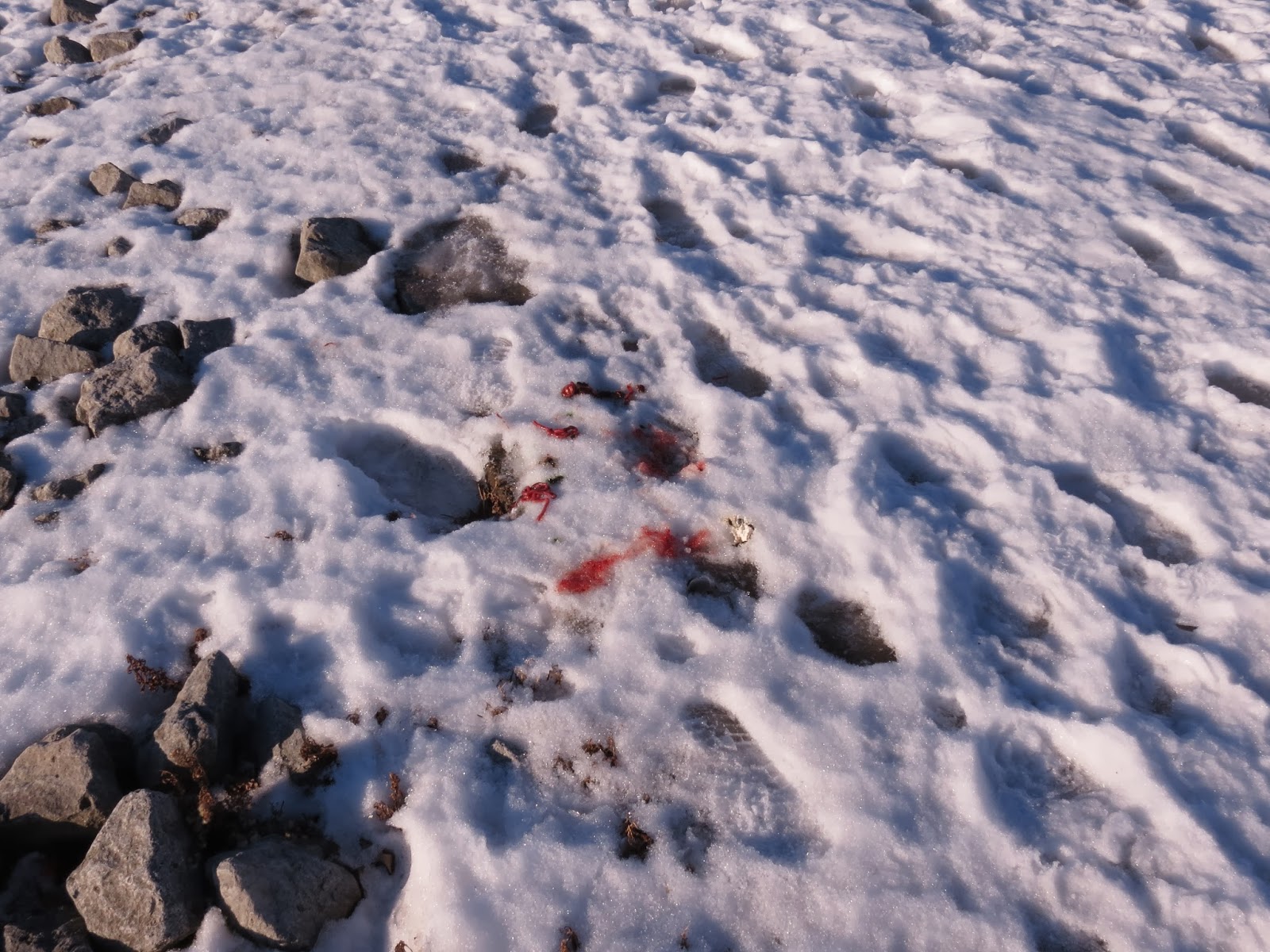 It's never a good idea to flush owls, but this was totally accidental, as I was walking into the sun and wind and had had no idea it was there.

Finally, here is what is probably the most unique picture I've ever taken: 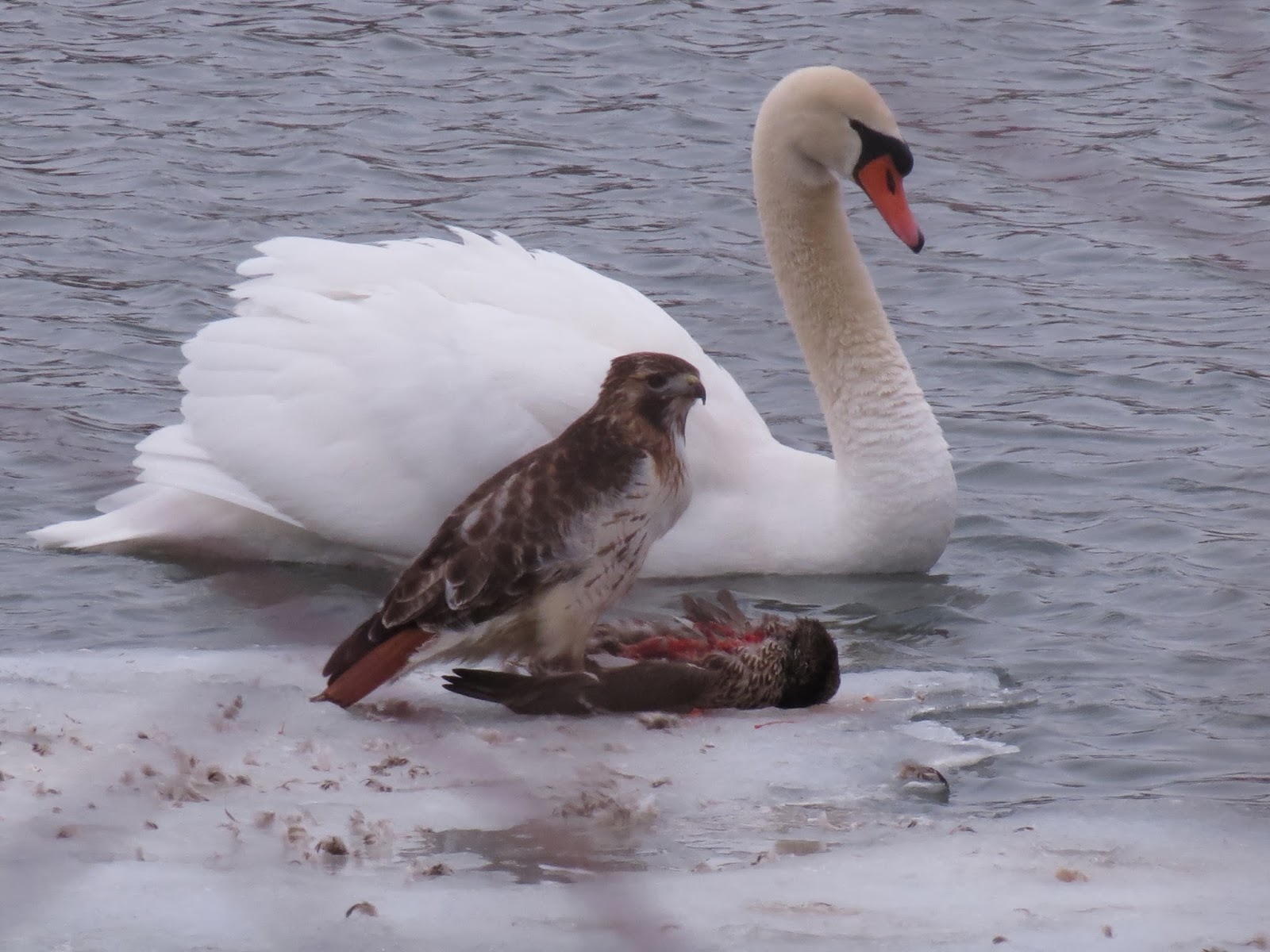 I noticed this Red-tailed Hawk tearing into a female Mallard near a group of ducks in Mississauga. The ducks gave the hawk a wide berth, but the Mute Swan was unperturbed, and I managed to get this very odd combination together!
Posted by Reuven Martin at 10:39 PM 2 comments:

Last week Andrew Bailey found a Varied Thrush at Guelph Lake, just north of the city. The next morning a few of us made the short trip and quickly got reasonably good views of this rare visitor. Varied Thrush is a western species, but shows up very regularly in eastern North America in the winter, with a couple found annually in Ontario. It was nice to get this species so close to home.

Otherwise, the birding has been rather slow. We're still 3-5 weeks away from the first big arrivals of migrant birds in March, but subtle signs of spring are already around. I haven't seen a Ring-billed Gull on campus since December, so the single individual present today may have been a new migrant. It's hard to say though, as they winter fairly regularly along the river only a couple of kilometres away.

Today in the arboretum I came across a large flock of robins feeding on Buckthorn in the falling snow. It's hard to believe that these birds will be feeding on lawns and singing from the treetops in a few short weeks!

note the nictitating membrane across the eye

I forgot to post this earlier, but better late than never: I was called "Best new regional birding professional" in an article in the London Free Press as a result of my guiding at Rondeau. Thanks Paul! 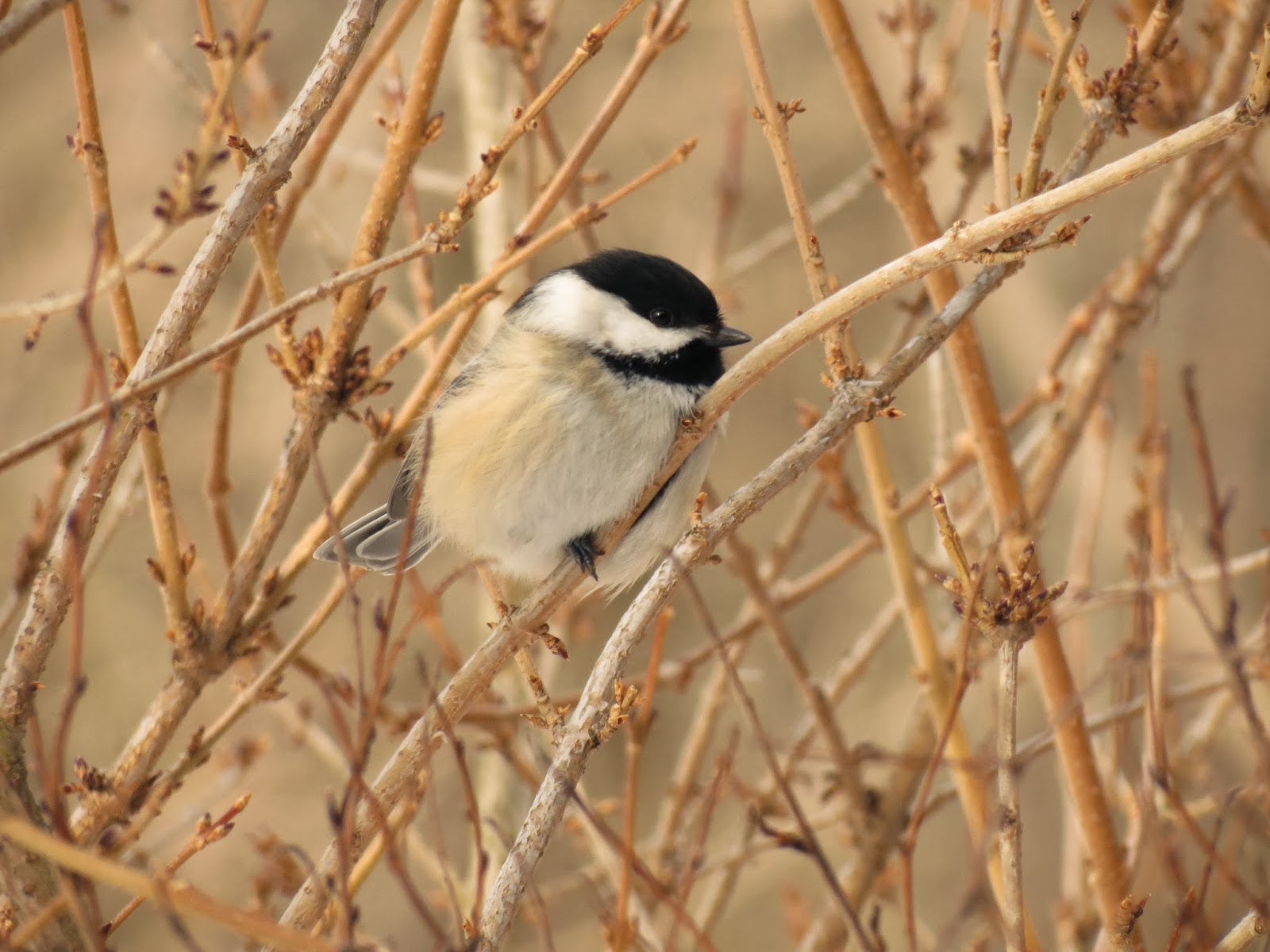 Today marks one year since my first time using my first camera. I'm still a rank beginner, and I don't know if I'll ever use a camera for much more than documentation or opportunistically when the right conditions arise, but I've certainly enjoyed being able to record and share my experiences. Below is one of the first shots I took - a Common Redpoll. This species is completely absent from Southern Ontario this winter. 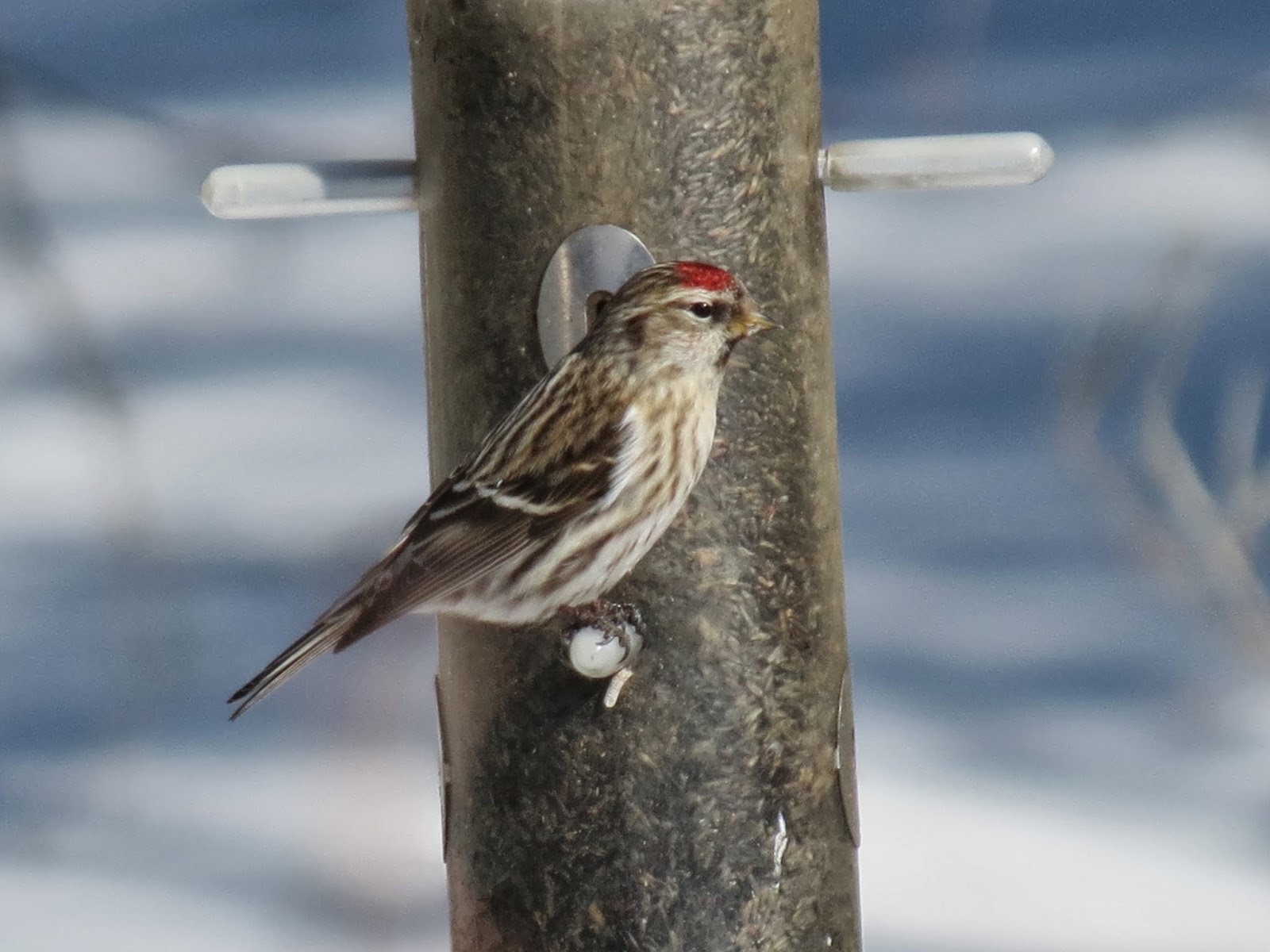 Posted by Reuven Martin at 9:38 PM No comments:

Lake Ducks in the River

There's been an interesting trend forming in Ontaio over the week - ducks rarely found away from large bodies of water, like Greater Scaup and Long-tailed Duck, showing up on rivers wherever there is open water. For example, I came across the following ducks on a walk along the Speed River in Guelph yesterday: 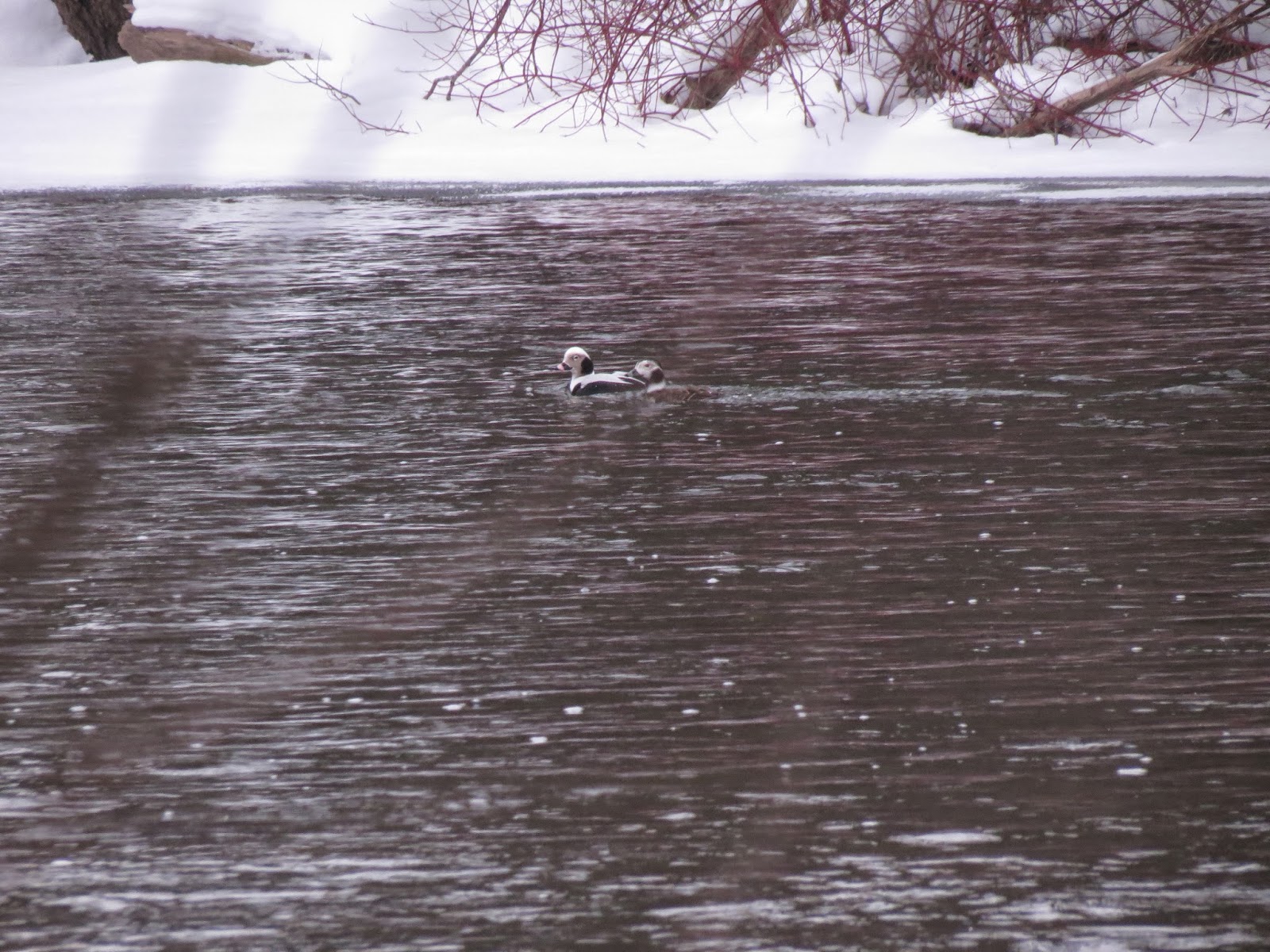 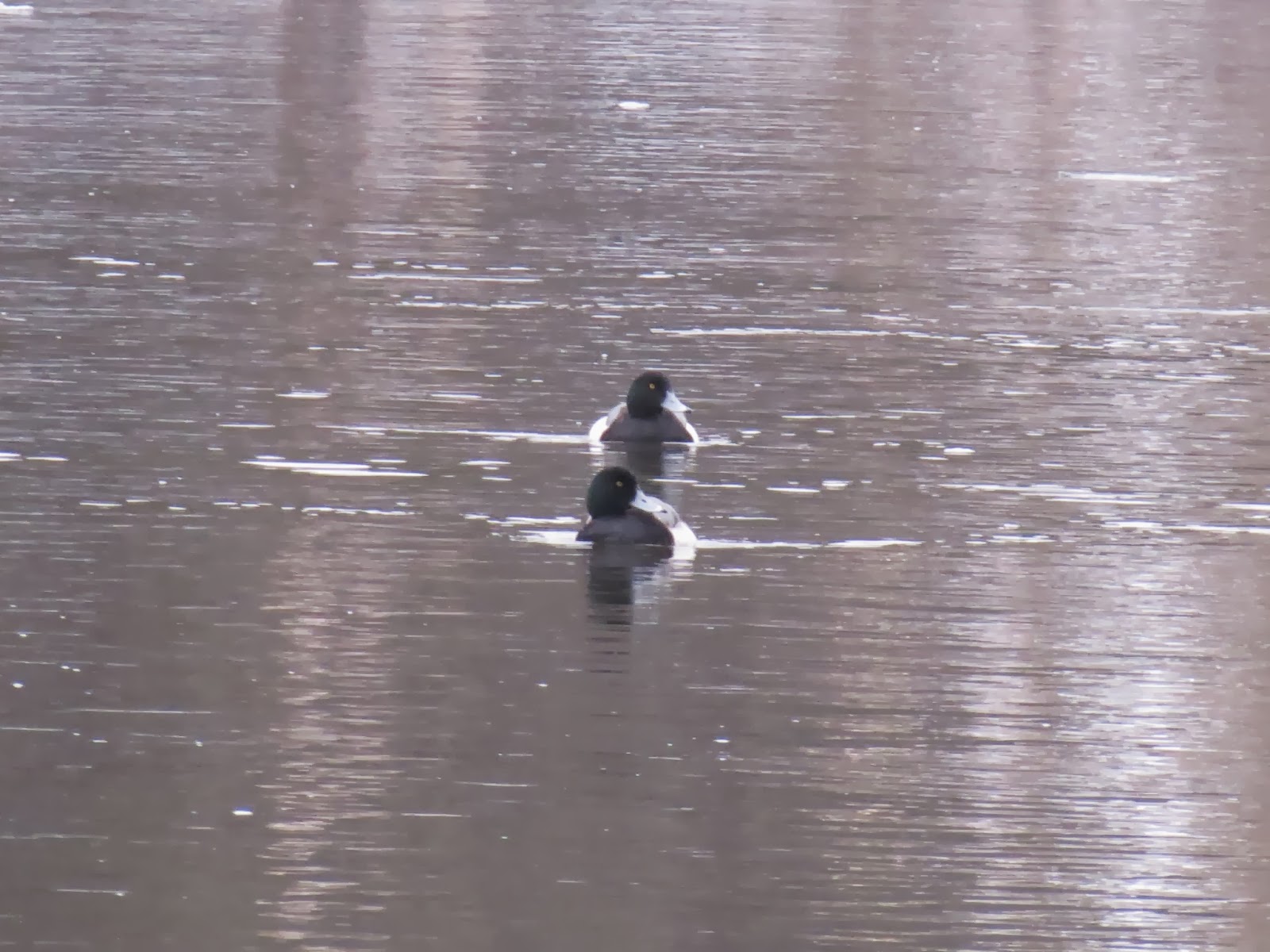 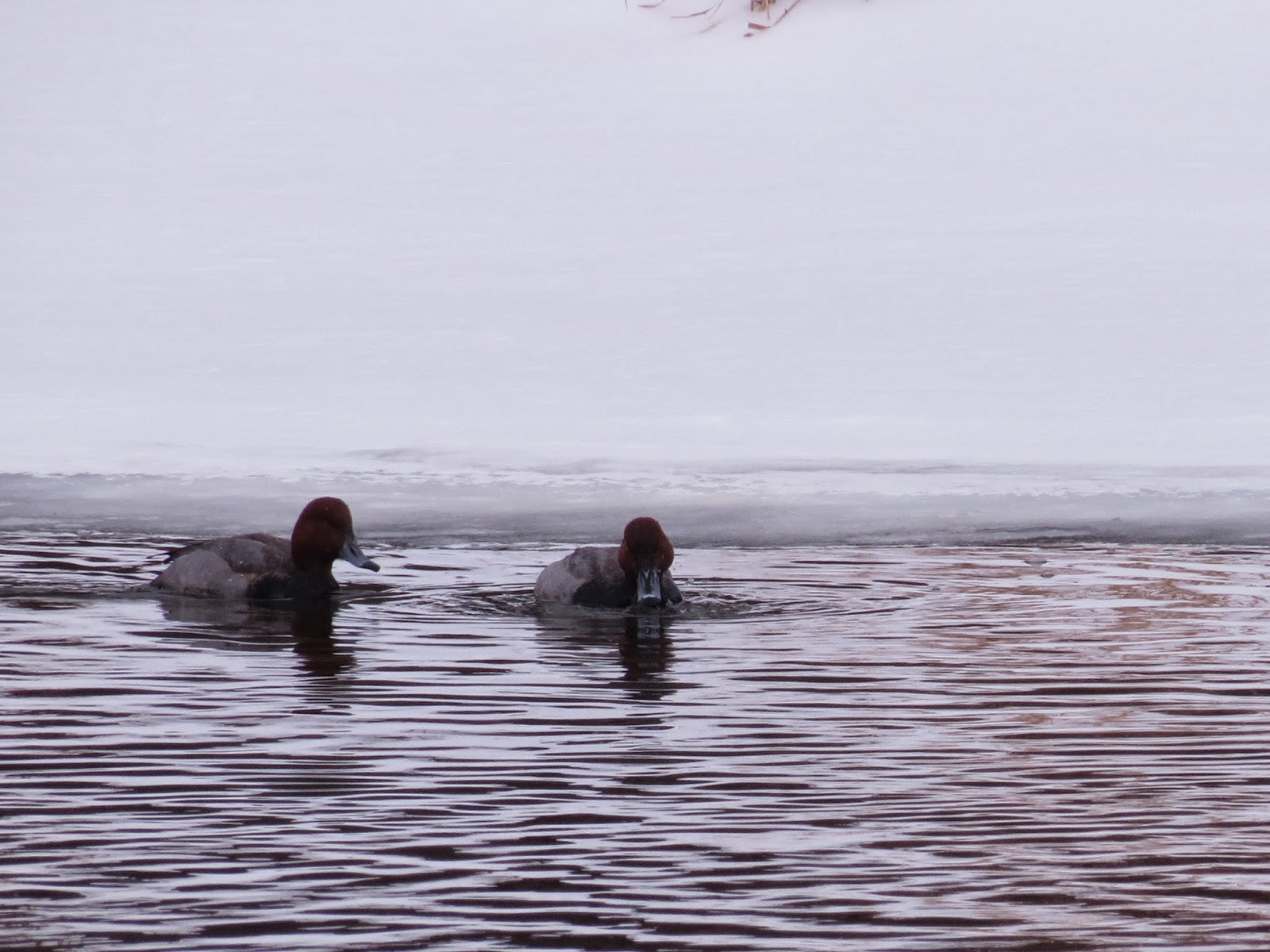 None of these ducks are normally found within the city of Guelph, and neither do they normally show up on small rivers. There are likely a couple factors at work here.

With the very cold winter, the Great Lakes have frozen extensively, as have any smaller lakes, ponds, and slower rivers. This has much reduced the amount of open water habitat for ducks, and many of the ducks normally spending the winter have been forced to move on.

In addition, ducks often move very early in the spring after south winds or warm temperatures, which has happened a couple of times recently. Some of these birds, particularly species like Redhead and Canvasback, may be very early migrants that haven't been able to find any more suitable open water.

Regardless of the reasons, these ducks provide some welcome excitement in this rather poor winter for birding.
Posted by Reuven Martin at 8:39 PM No comments: