A Cute Kind of Day

Last weekend I did some exploring in the general Barrie area with Peter Mills. For the most part, we had little luck in finding our targets, but two experiences to bookend the day made it worthwhile.

Our first stop was at Wasaga Beach to track down the regularly nesting Piping Plovers, a lifer for me. They were very easy to find as the nests have been covered in wire cages to protect them from large predators, but views were very unsatisfying. Luckily, we soon came upon a rather tame plover foraging outside the area enclosed by protective fences. 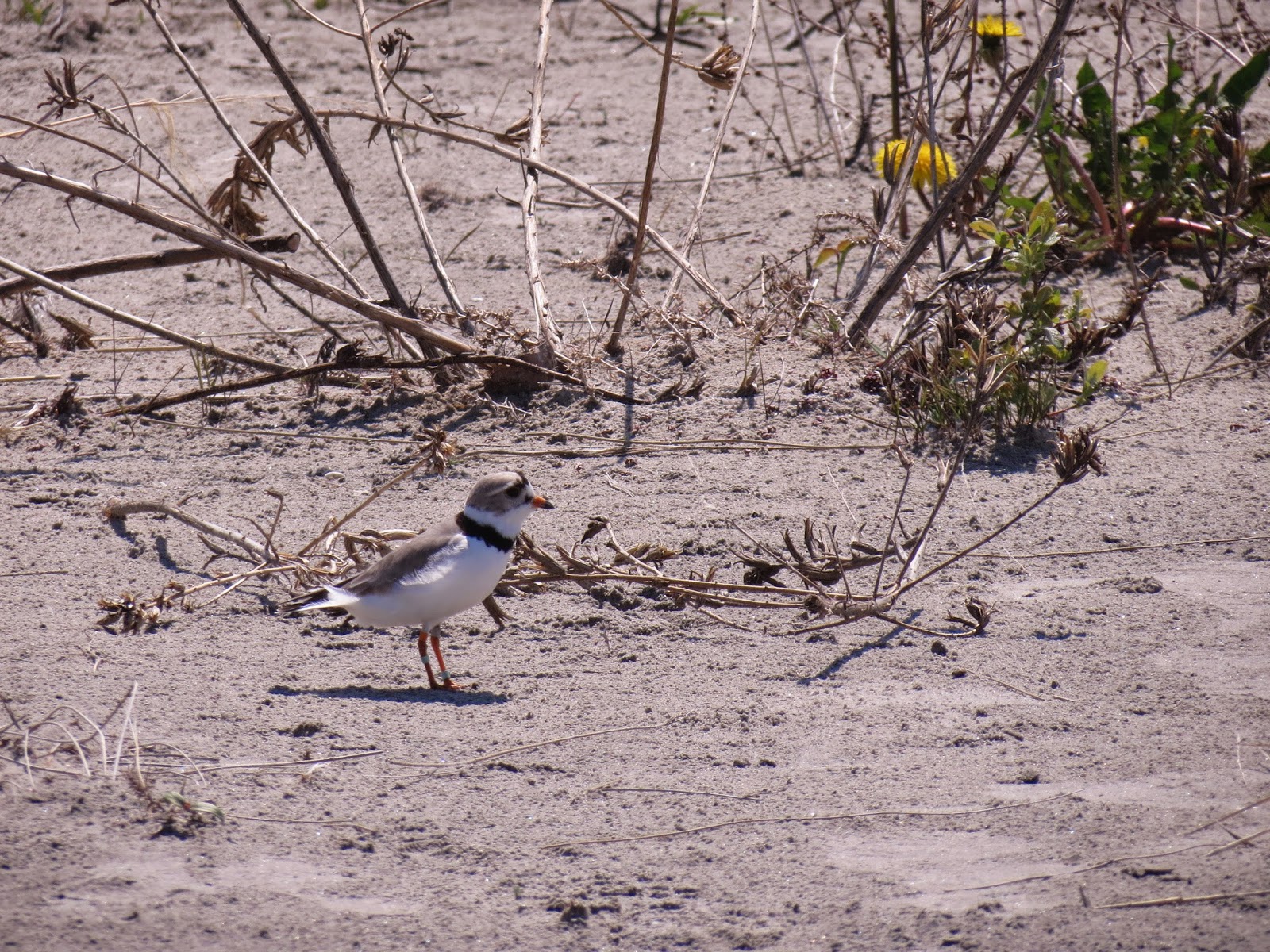 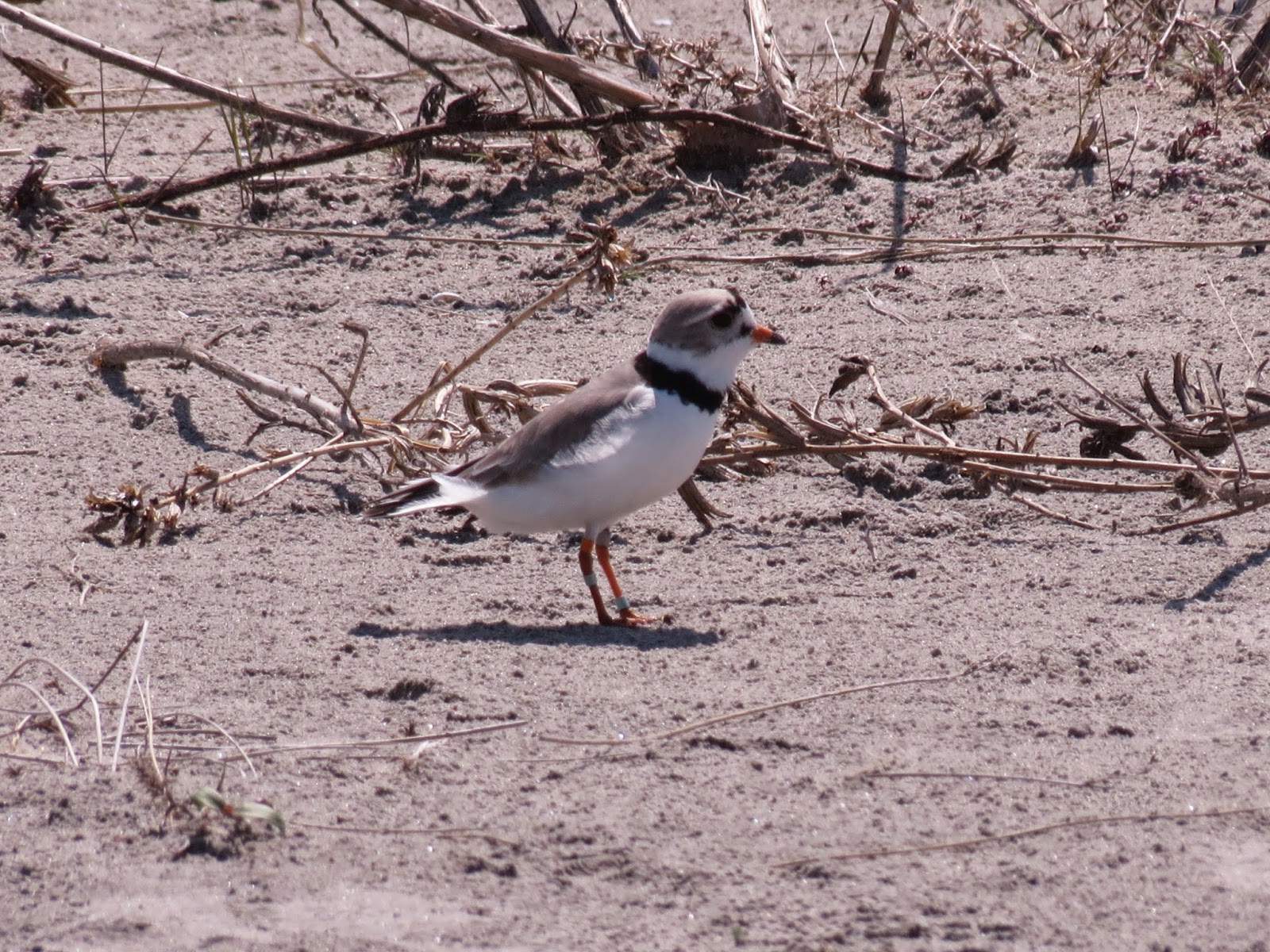 Although we only saw 3, at least 6 birds (3 pairs) are nesting here this year. If there was a competition for the cutest bird in Ontario, I think these guys would win.

The rest of the day was fairly quiet but interspersed with nice sightings such as Yellow-throated Vireo, many Black Terns, Common Gallinule, Sora, several Northern Water Snakes, and a few common dragonflies that were firsts for the year.

Later in the evening as we walked along the waterfront in downtown Barrie, we noticed about a dozen people were photographing something in a grassy area next to the train tracks. As we got closer, two fox kits were very apparent as they lounged on the grass outside their den! 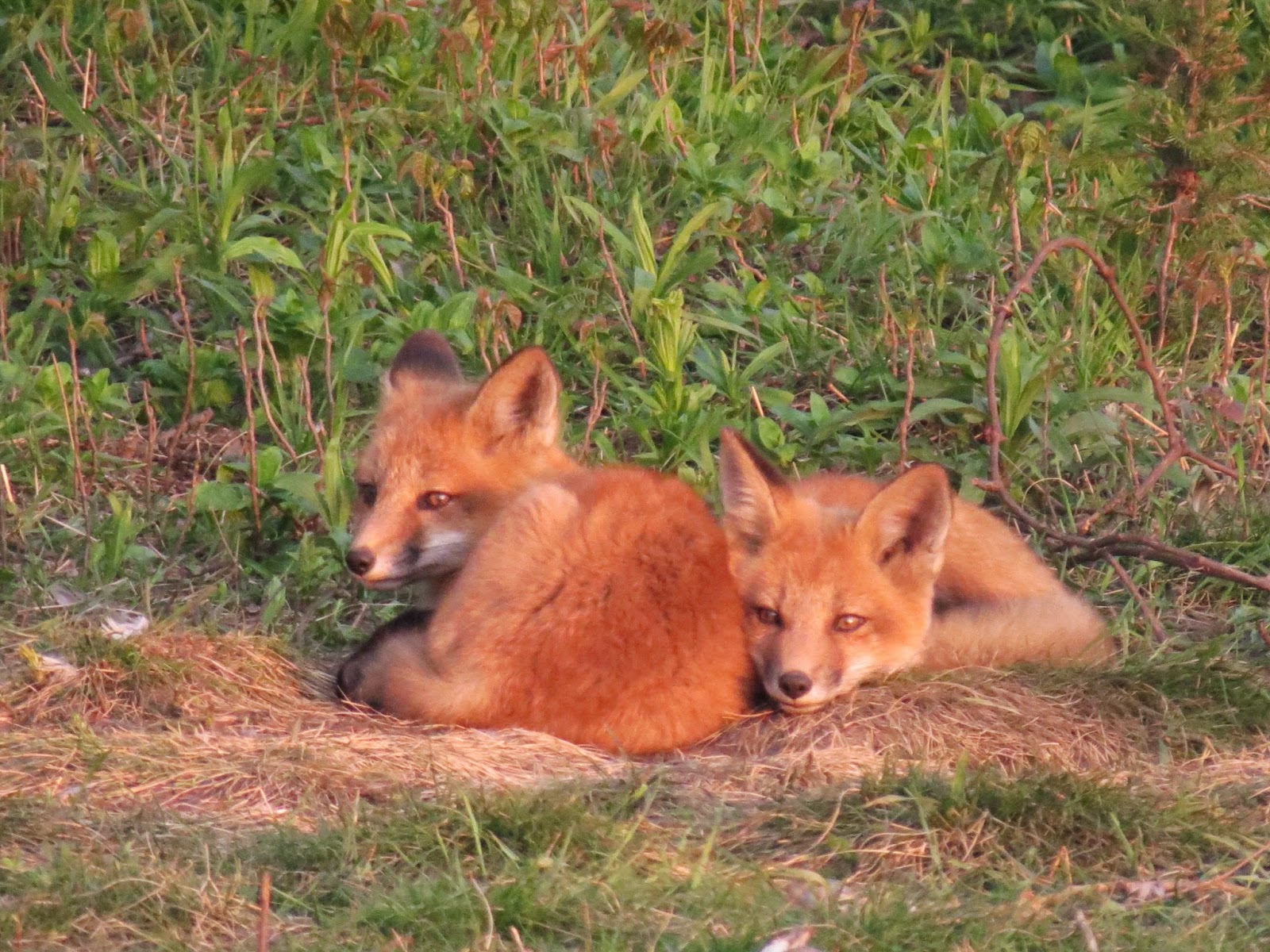 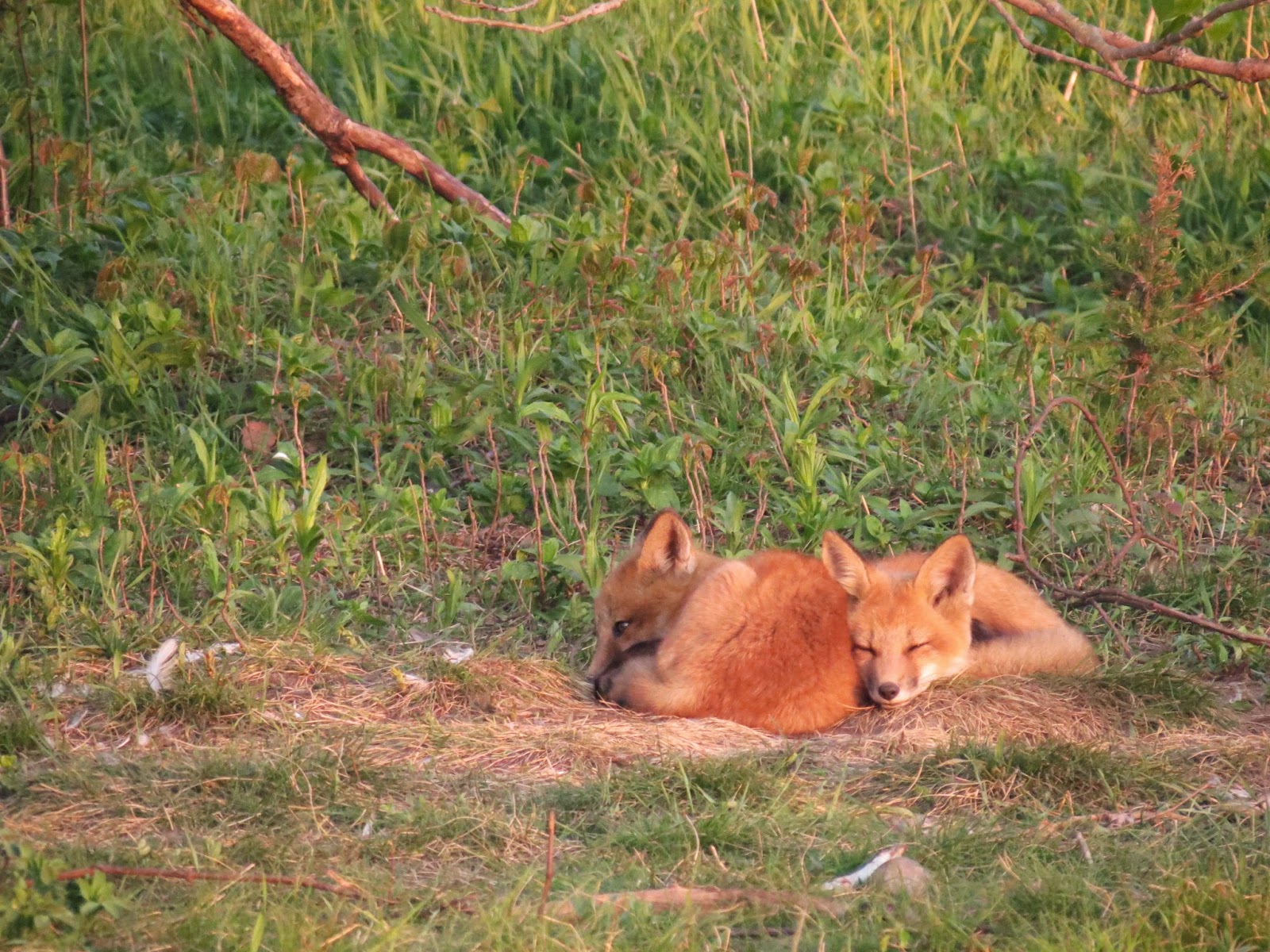 Not really what you expect to see in the middle of the city!
Posted by Reuven Martin at 9:04 PM No comments:

Yesterday I cycled down to Lake Ontario in Mississauga in hopes of seeing shorebirds flying by, particularly Whimbrel which are seen in this area at this time every year. When I arrived, it was immediately apparent that extremely impressive numbers of Gulls and Terns were feeding on dead and dying fish (primarily Alewife I believe) in the mouth of the Credit River. This provided a welcome diversion while waiting for shorebirds, and as I scanned through the flocks I noticed first 2 adult Lesser Black-backed Gulls sitting on the water, followed by a very late immature Glaucous Gull.

Turning my attention to the Ring-billed Gulls resting on the wooden boat docks in the harbour, I quickly hit the jackpot - an immaculate adult Laughing Gull! 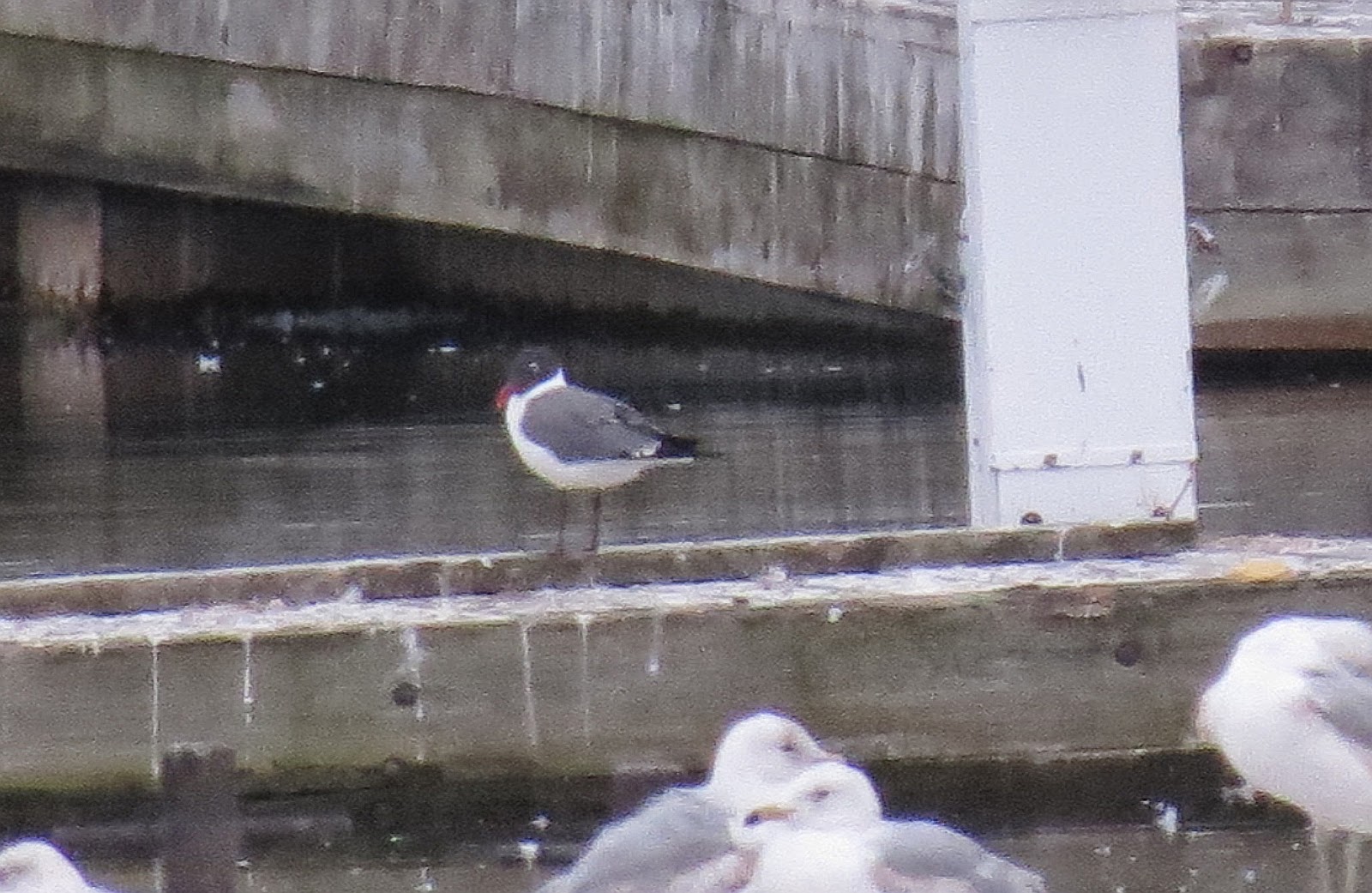 Views were much better than this photo suggests!

What is likely the same bird was seen about 3 km to the east a week ago, so I had Laughing Gull on my mind, but still didn't really expect to find it. Laughing Gull is quite a rare bird in Ontario with perhaps 5 sightings a year.

Laughing Gull is my 301st bird species in Ontario. Regular readers may remember that I noted my list was at 296 at the beginning of May, and hoped to hit the "magic 300" this month. Here's how it happened:

297: On May 2nd I easily refound the continuing Eared Grebe at the Blenheim Sewage Lagoons. An overdue lifer! Of note is that this is the only one of the additions that I didn't find for myself. 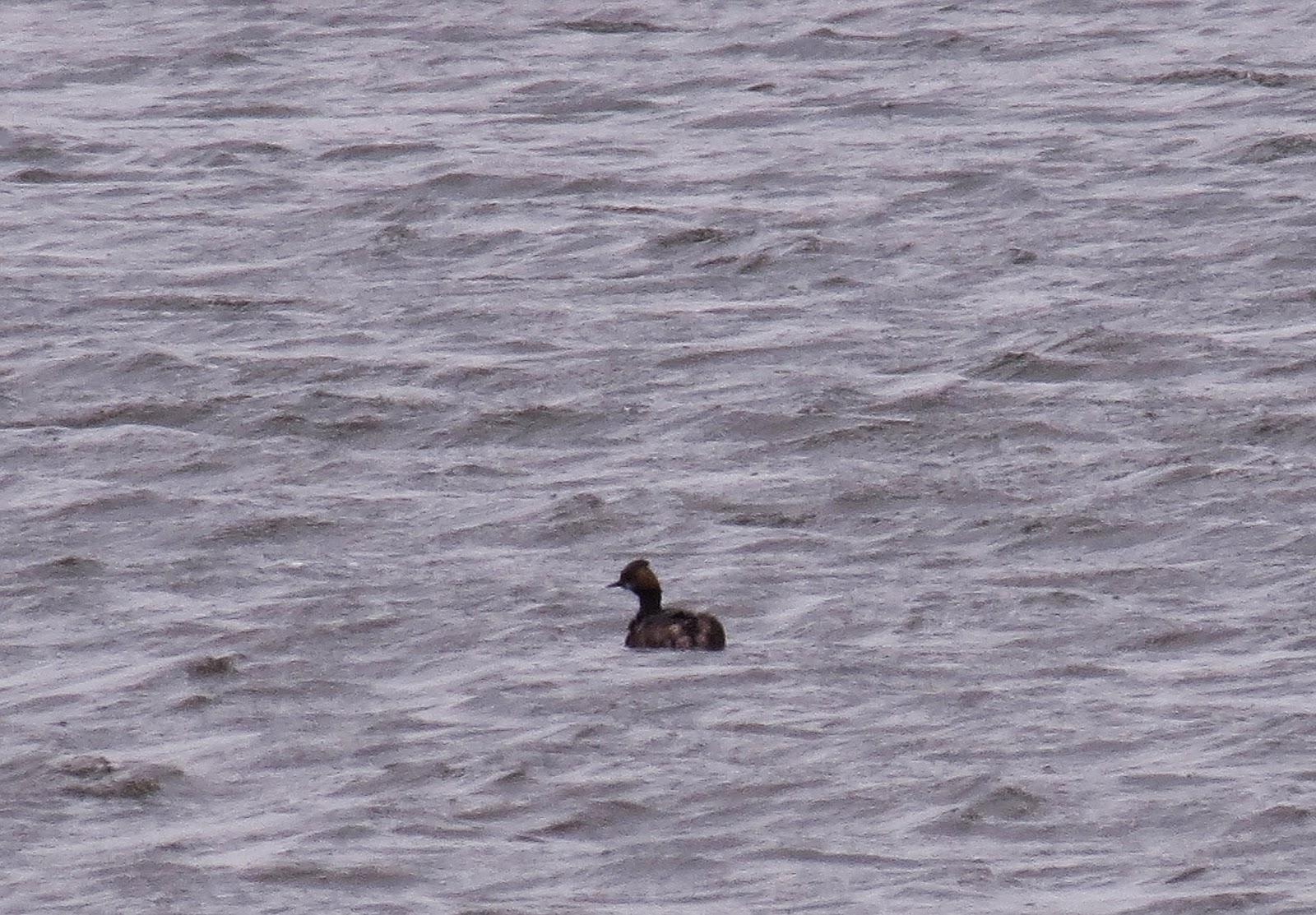 298: Early in the morning on May 6th (and several other days), songbirds were streaming north out of Rondeau by the hundreds to thousands. The cool weather and late leaf-out was likely suppressing insect activity forcing them to move on. I was checking out the movement at the entrance to Marsh Trail, when I put my binoculars on a small flock of chipping sparrows foraging directly on the gravel trail, and immediately noticed an enormous, pale, boldy-marked bird mixed in: a Lark Sparrow! After a few seconds of enjoying the lifer, I ran back to my car (just around the corner) for my camera, but the bird was gone and was never seen again. I had hoped it would forage with the nearby sparrow flocks for the day, but it no doubt headed north with the many birds going by overhead.

I could have hit 300 a long time ago by chasing rarities and localized birds, but 4 self-found lifers in a row is pretty special! Looking back, the last time I did it was spring 2011, and it is quite likely I will never do it again in Ontario as new birds are rapidly becoming hard to find.

By the way, my shorebirding was also very successful yesterday, with about 110 Whimbrel, 250 Dunlin, 3 Sanderling, 2 Semipalmated Sandpiper and 1 Ruddy Turnstone in total. I'm sure I also missed many birds while looking at gulls! A Tale of Two Rarities

I'm back! After a great couple of weeks birding and leading hikes in the Rondeau area, I now have decent internet access again, so expect regular posts to resume. For now, I want to share the story of two very rare birds I stumbled upon last week.

This winter was extremely harsh, and the ice build-up in Rondeau Bay partially destroyed the pier in the park. As it is now inaccessible for people, gulls and terns have been gathering on what is left, and I checked it several times a day while staying at Rondeau.

On May 15th I was walking towards the Marsh Trail parking lot to meet a friend, which took me on a route allowing distant views of the pier. A quick view revealed two cormorants sitting there - piquing my interest as I hadn't seen any on the pier previously. One of the two appeared to be smaller, and while I didn't really think it was anything special, I decided to get closer.

About halfway to the pier I scanned it again, and that cormorant was still looking strikingly small next to the other. This was the point where I started running!

I got to the base of the pier, raised my binoculars and there it was - a Neotropic Cormorant! 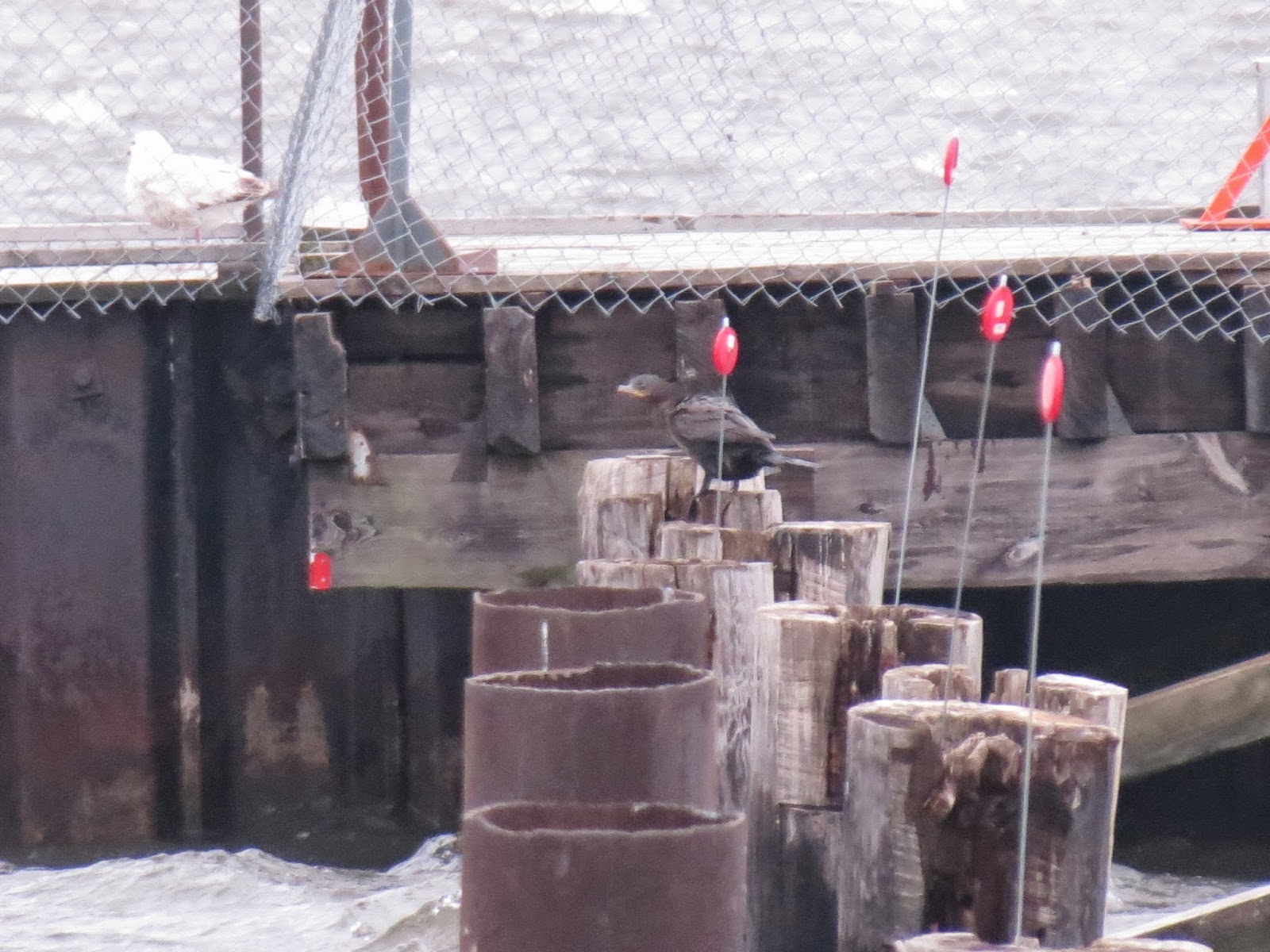 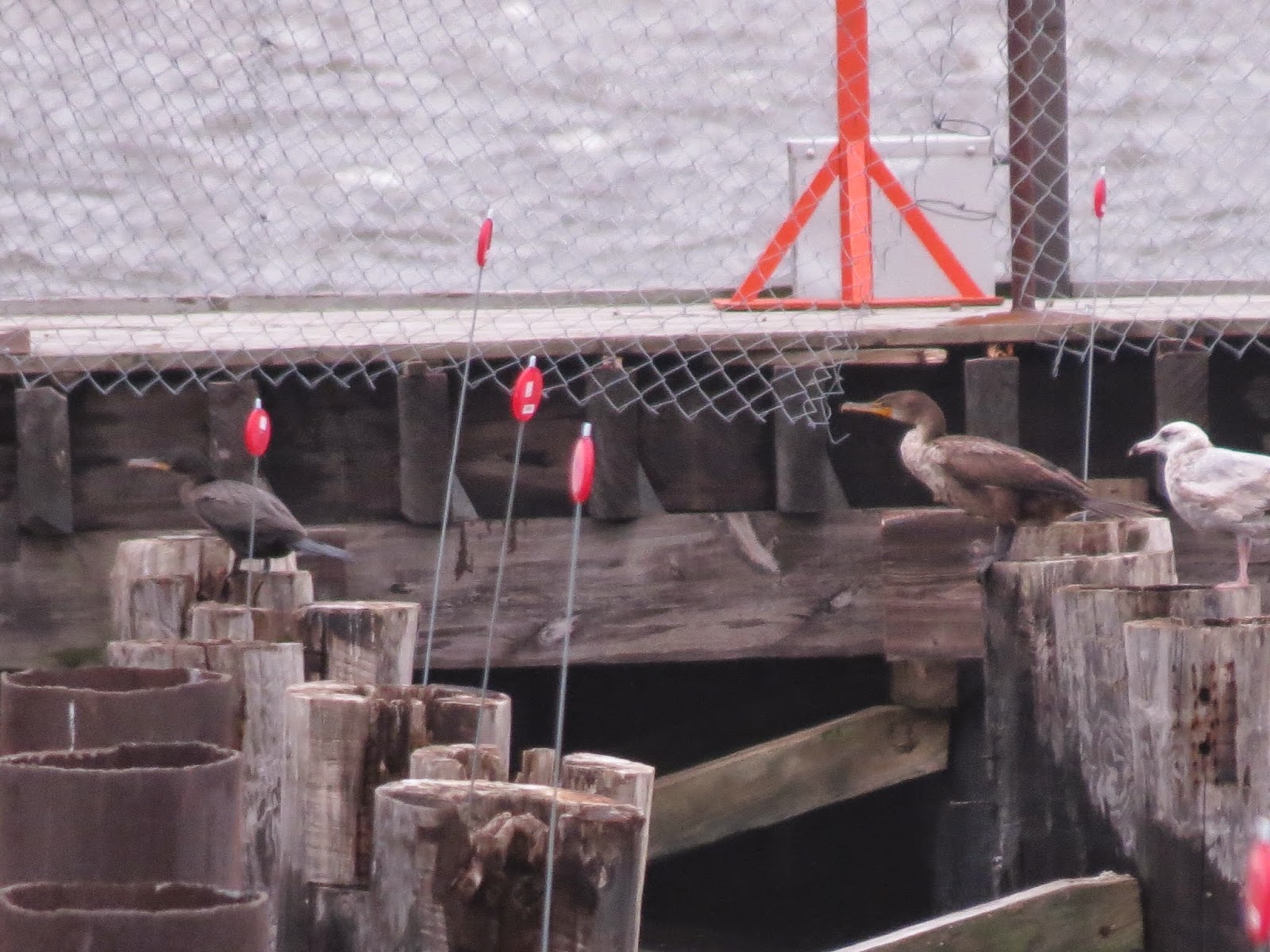 Note the short bill, small size and long tail of the Neotropic. There appeared to be some white around the base of the bill, but looks were poor.

After no more than about 30 seconds, the cormorants took off heading south. I called Pilar who was at Marsh Trail and she was also able to see the two distinctly unmatched cormorants going by.

Neotropic Cormorant is the rarest bird I've ever found - although records have been slightly more frequent in recent years, there are still only a handful for Ontario, with this being the first for the Rondeau area. What is presumably the same bird was seen again and photographed at Erieau a couple of days later.

The very next day I had a good day of birding, with the highlight being a gorgeously pink adult Franklin's Gull at Erieau. I was leading a hike on Marsh Trail in the evening with four relatively beginner birders, where we drove well out on the trail to spend much of the evening in the marsh itself.

Shortly after parking and beginning to walk, I noticed several sparrows feeding on the trail ahead of us. Most were obviously White-crowned Sparrows, but one bird was bigger, chunkier and completely unfamiliar, even from views of its back as it hopped around the corner.

We moved up, and I quickly got views of the bird feeding on the trail in the scope. Still, I didn't know what it was! Most reminiscent of Fox Sparrow, my mind leapt to some kind of Old World Bunting. It was only when it flew revealing whitish patches in the wings and a very distinctive white pattern in the tail that I realised what it was - a female Lark Bunting!

It fed for about 5 minutes as I showed it to my hike participants, before it abruptly flew into the bushes on the side of the trail, never to be seen again that evening or the next day. I unfortunately never managed to get a photograph.

Lark Bunting has been recorded about 30 times in Ontario, but is probably now about equal in rarity to Neotropic Cormorant given that species' recent increase in eastern North America.

So there you have it - the two rarest birds I've ever found, and only a little over 24 hours apart! More to come soon.
Posted by Reuven Martin at 12:27 PM No comments:

The last week has been cold, wet and windy - not ideal conditions for migration! Things have finally improved a bit and warblers are starting to arrive, with 6 species on my patch this morning.

This Black-and-white Warbler found a big moth, and proceeded to process it right in front of me. 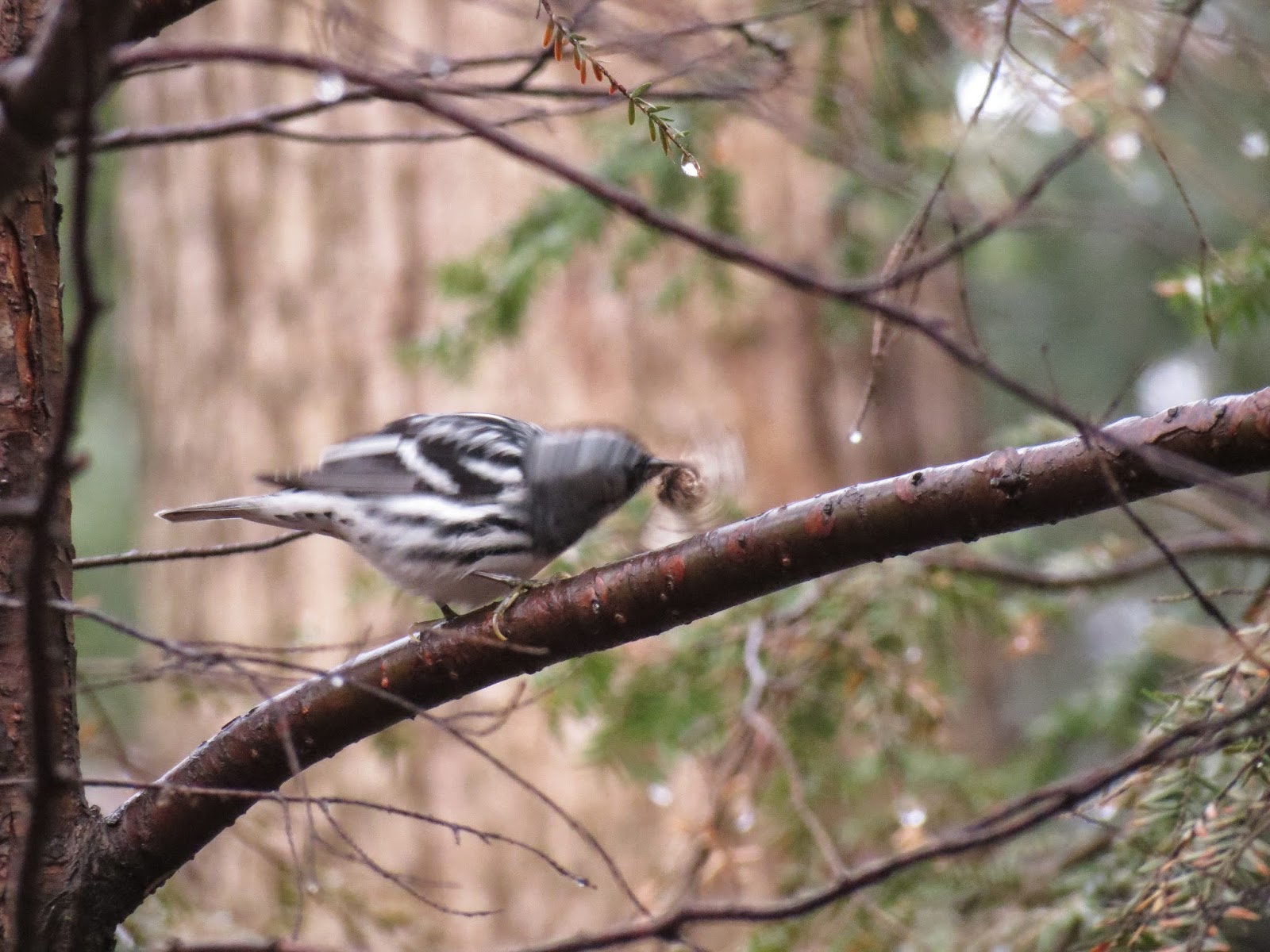 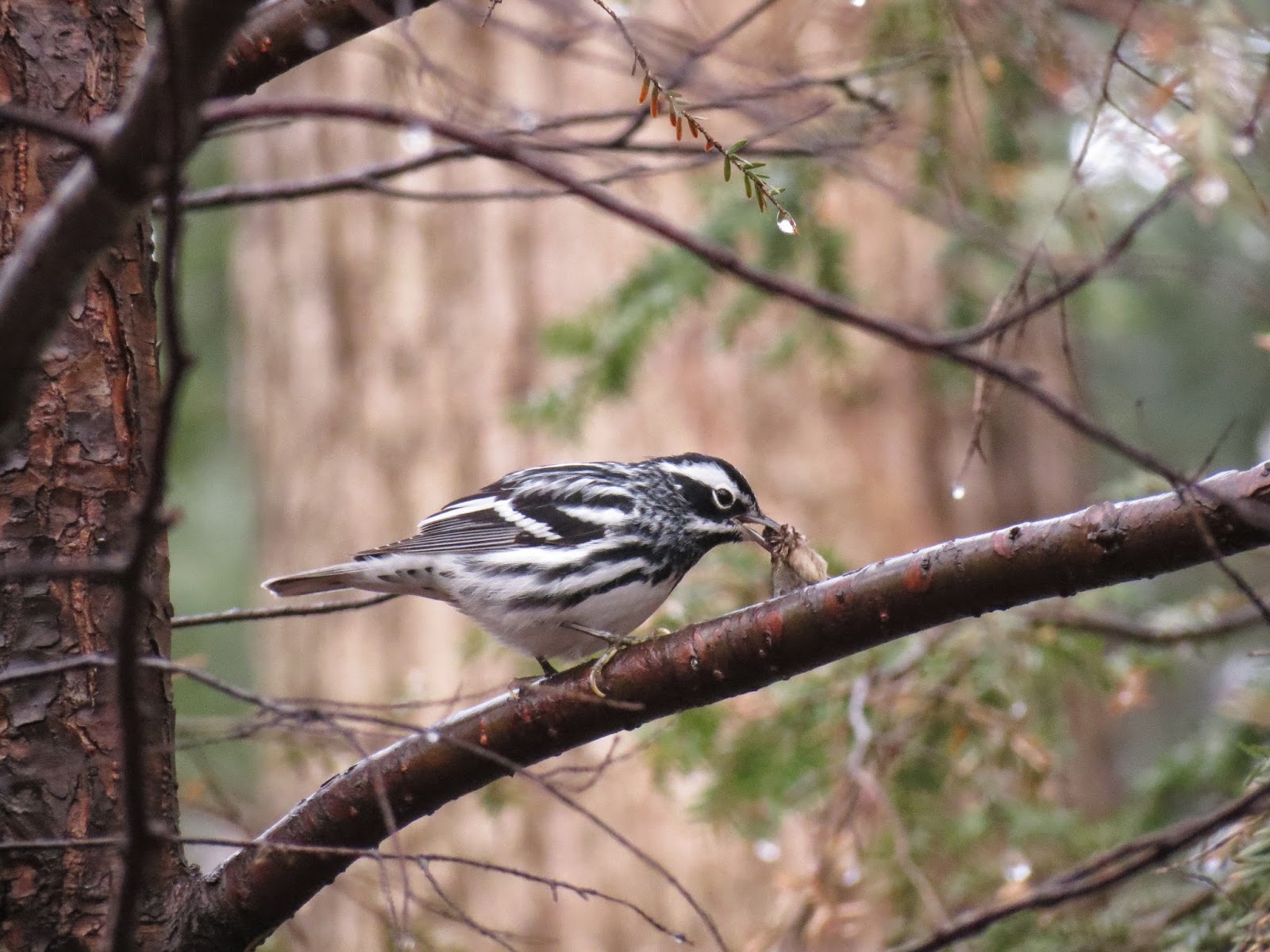 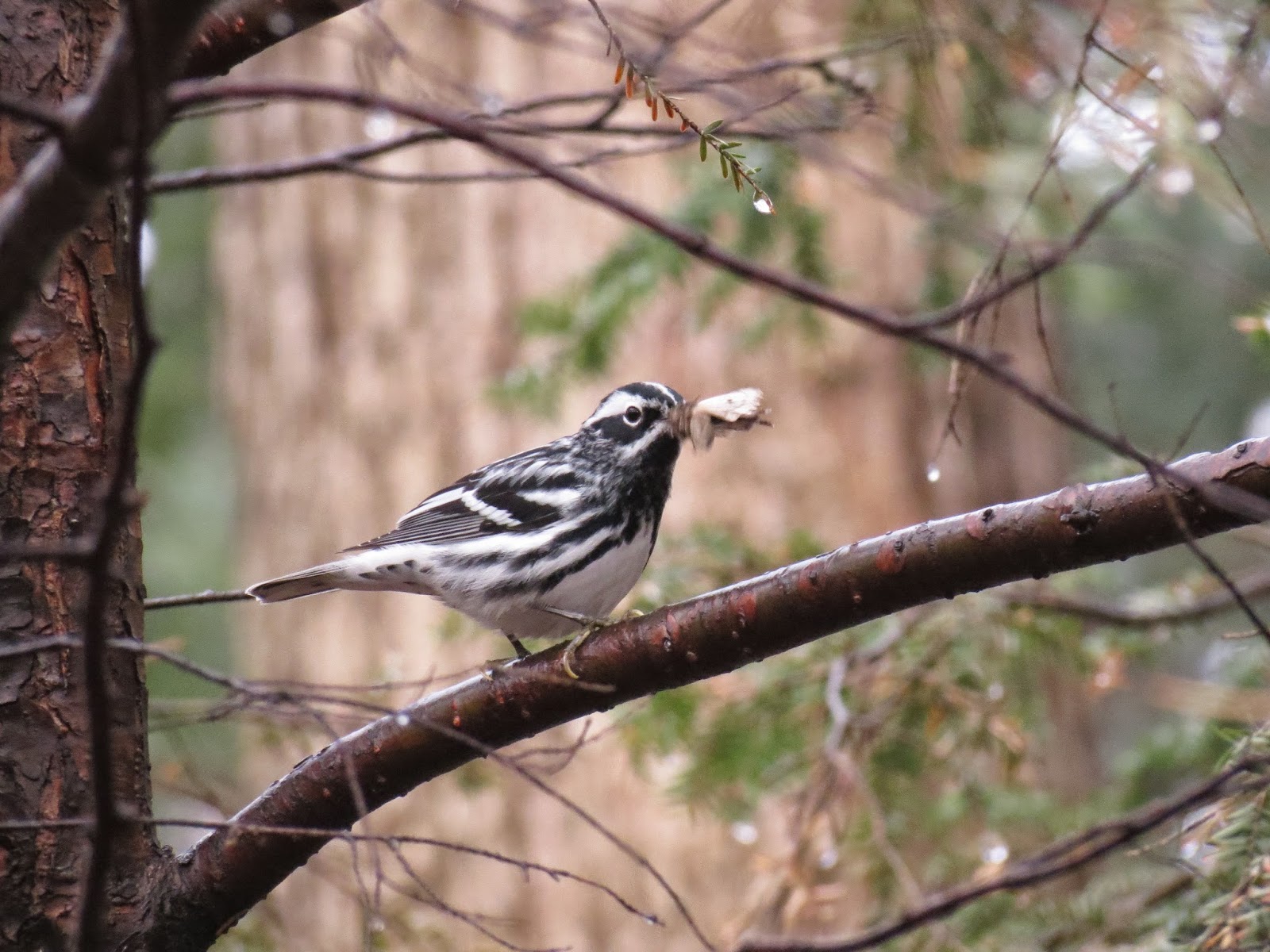 Eventually he flew down to the ground to remove the wings and swallow the thick body.

Other warblers I've seen this week include many Yellow-rumped as well as smaller numbers of Pine, Palm, Nashville, Black-throated Green and Northern Waterthrush. 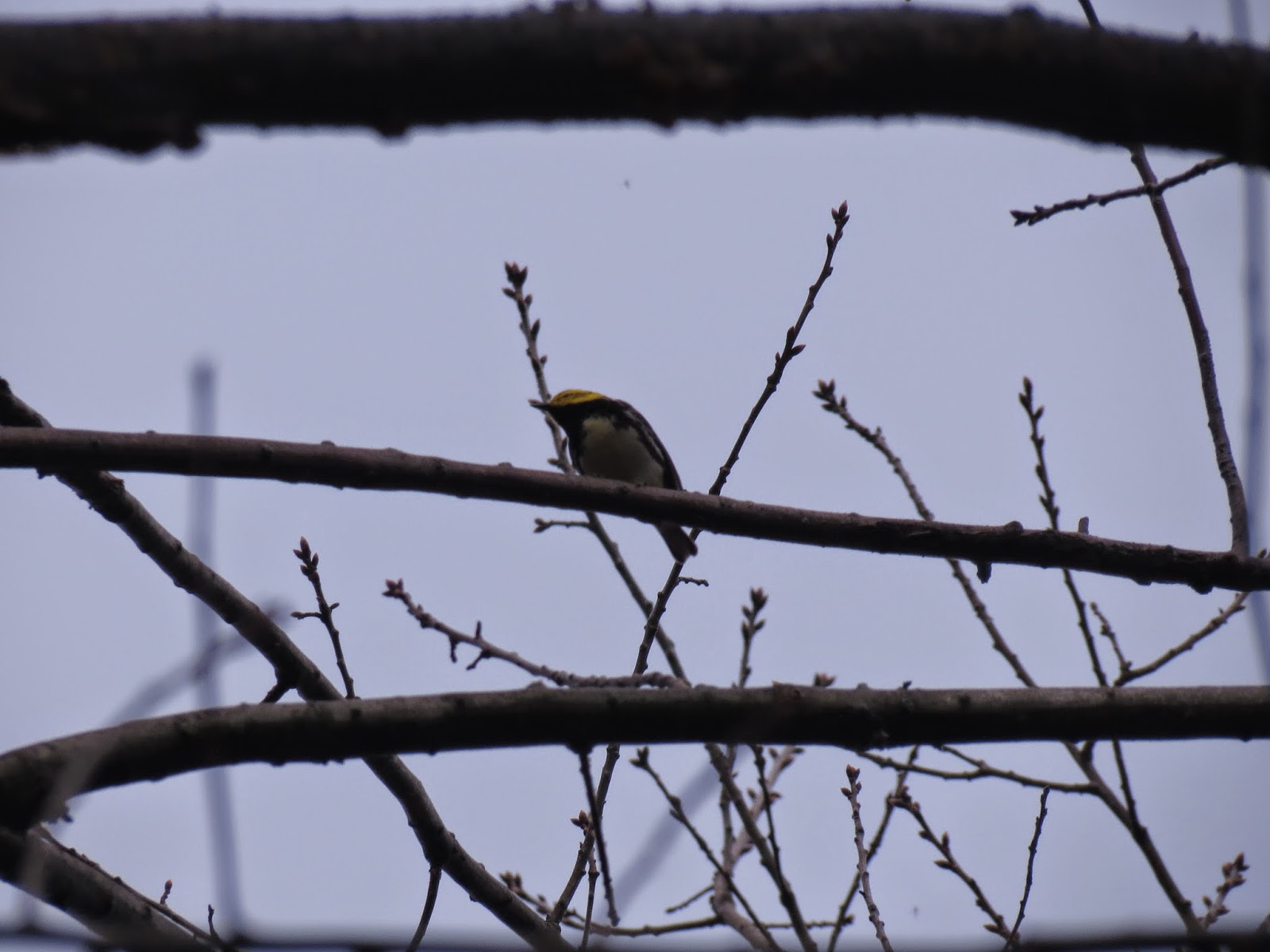 Tomorrow I head back to Rondeau for the first two-thirds of May to lead tours for their festival of flight. Right now there are three continuing birds in that part of the province that would be lifers - Eared Grebe, Marbled Godwit and Smith's Longspur. I'll definitely check for the grebe but the other two are a bit more out of the way, and I may just spend more time birding Rondeau and looking for my own birds instead. On the other hand, I am only 4 away from 300 birds all-time in Ontario, and it would be really nice to reach that milestone this month!