Hooded Warbler on my Patch!

On my back from a rather uneventful morning walk at my patch in Mississauga this morning, I was shocked to see a bright yellow bird fly across the trail in front of me. I had suspicions about its identity, and sure enough it was a stunning male Hooded Warbler!

This is one of my favourite warblers, as well as a new bird for both my patch and for the year. Hooded Warbler is quite rare this far north, and this is only the second I've seen away from Lake Erie. Luckily, he was sticking to a small area next to the path, so I was able to watch him for as long as I wanted, and indeed several others were able to see him in exactly the same spot later in the afternoon. 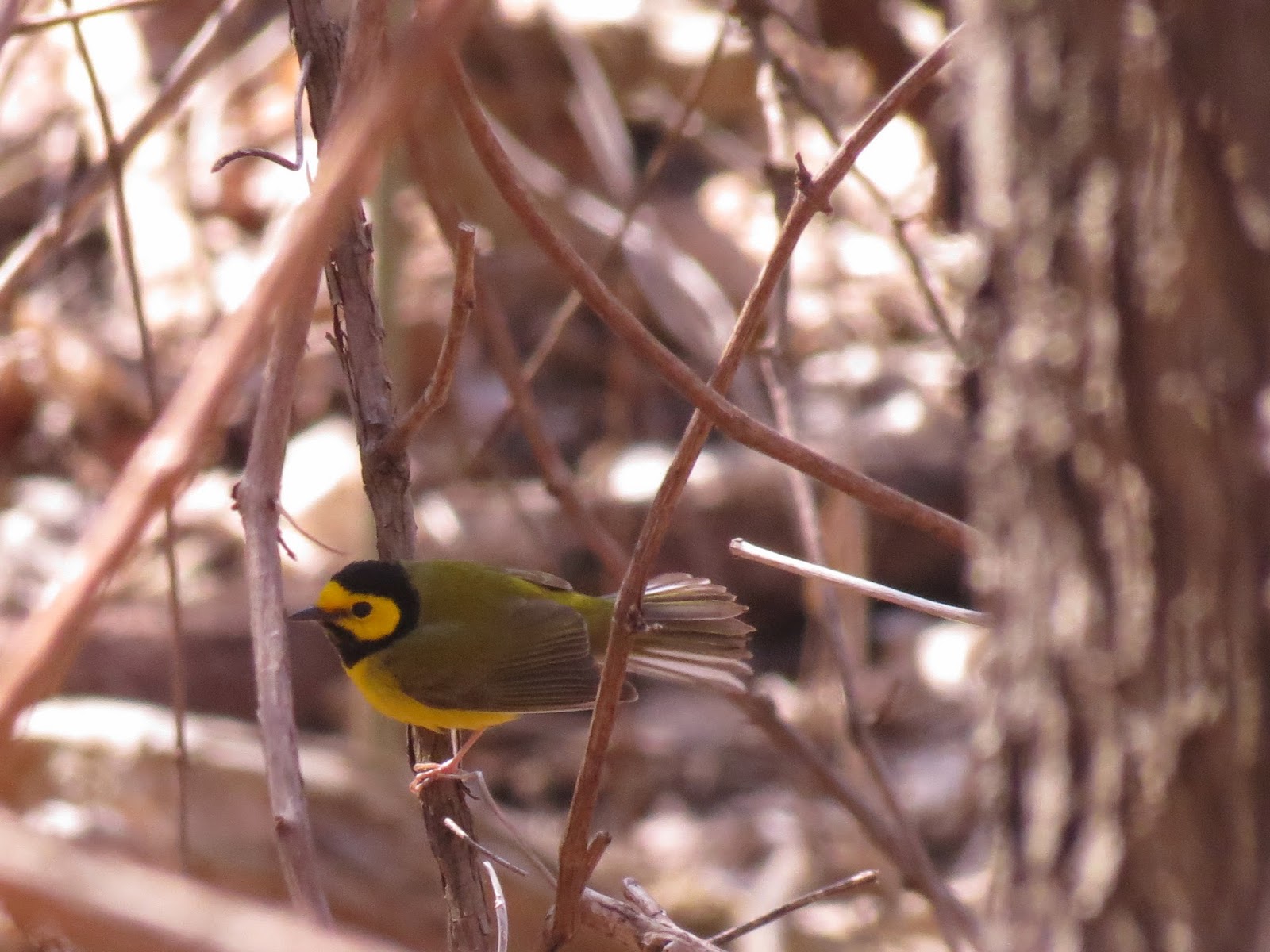 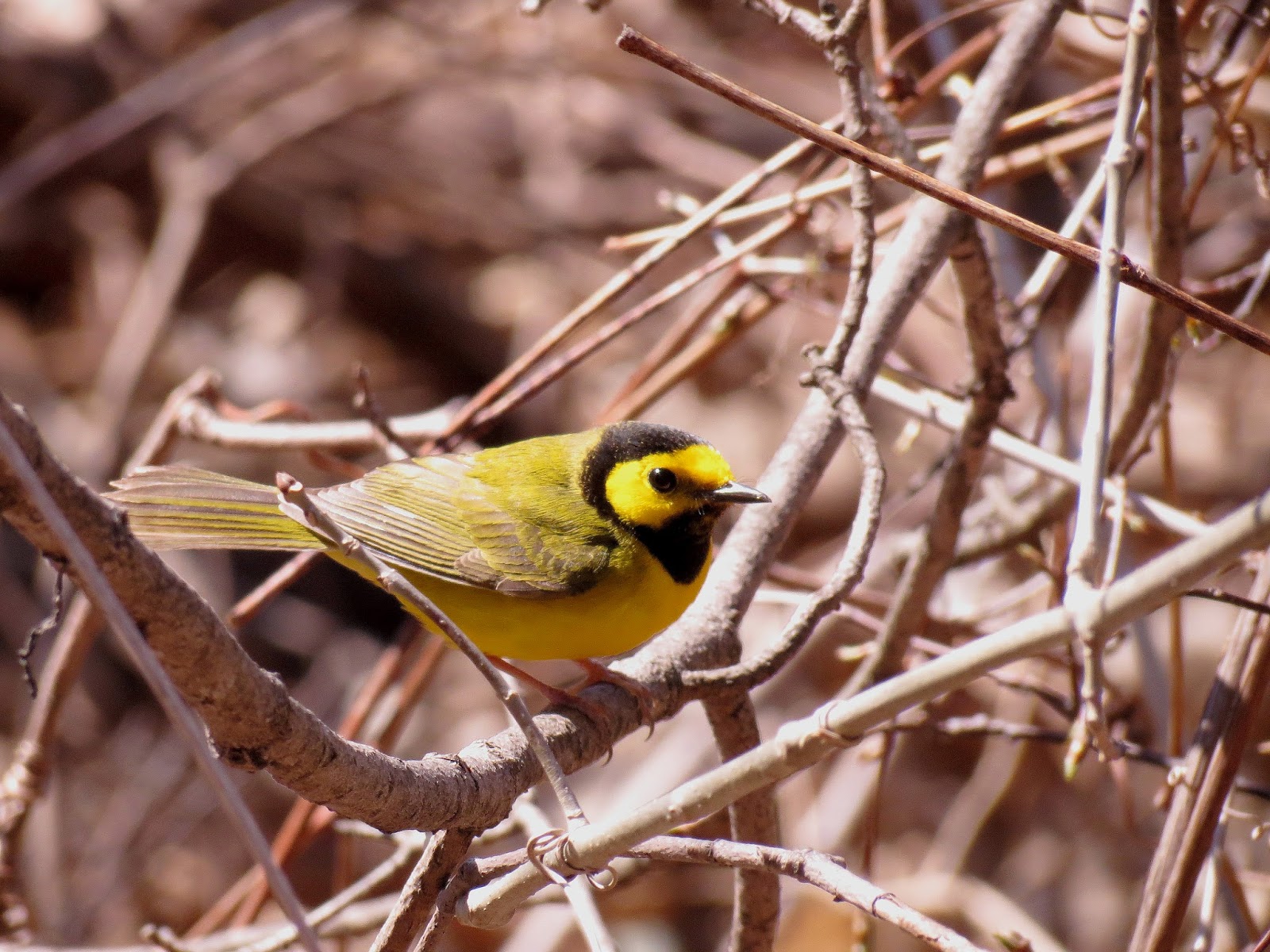 Although he was skulky, he was unconcerned about my presence, and several times gave excellent close views. 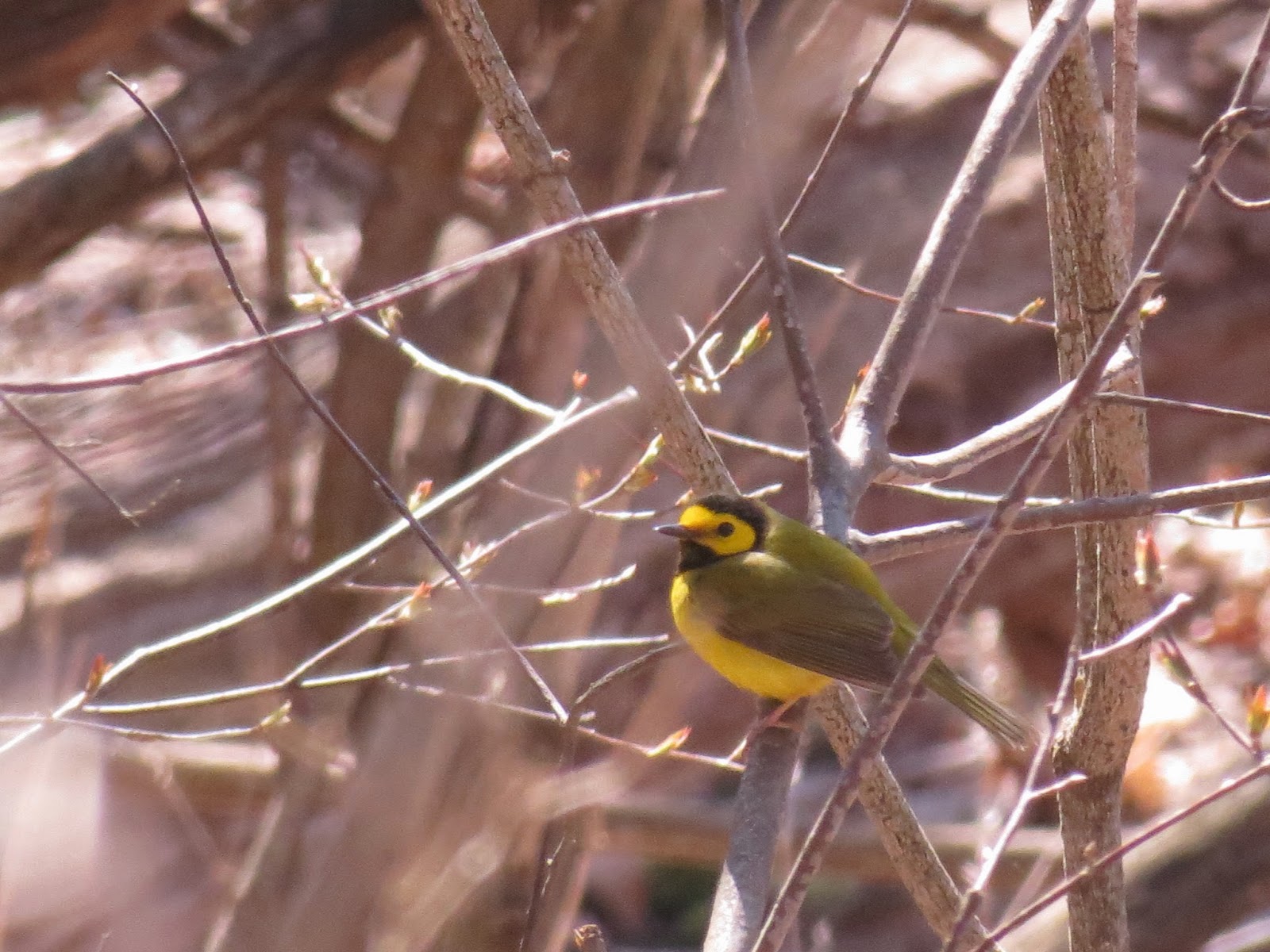 He was spending most of his time in a dense tangle of vines and fallen logs. 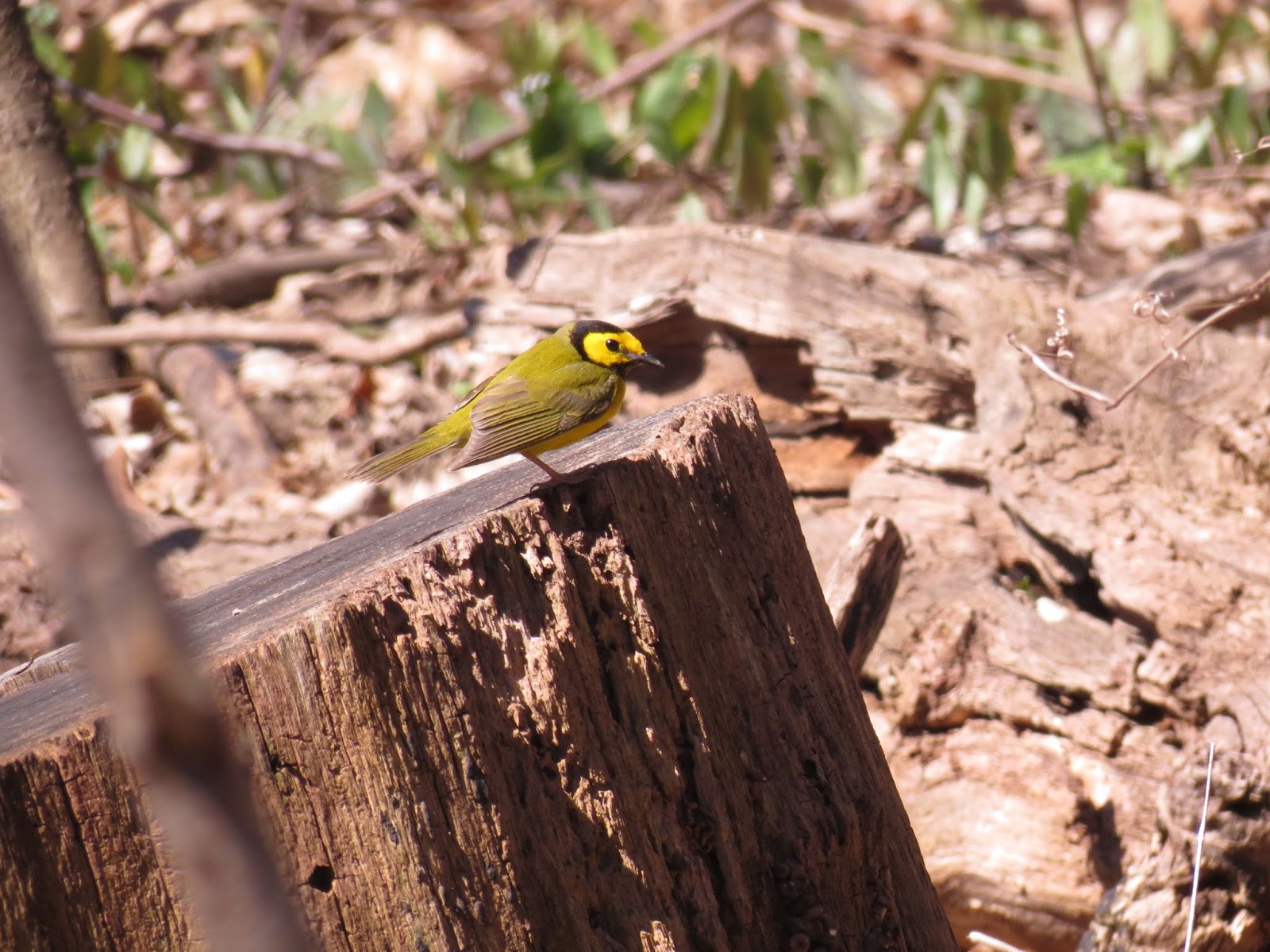 I've taken a rest on this stump many times, but never expected to get a photo of a Hooded Warbler in the same spot! Also note the Trout Lily leaves in the background. In the last week I've noticed Trout Lily, Hepatica, Skunk Cabbage, Coltsfoot, Bloodroot and Violets in bloom. 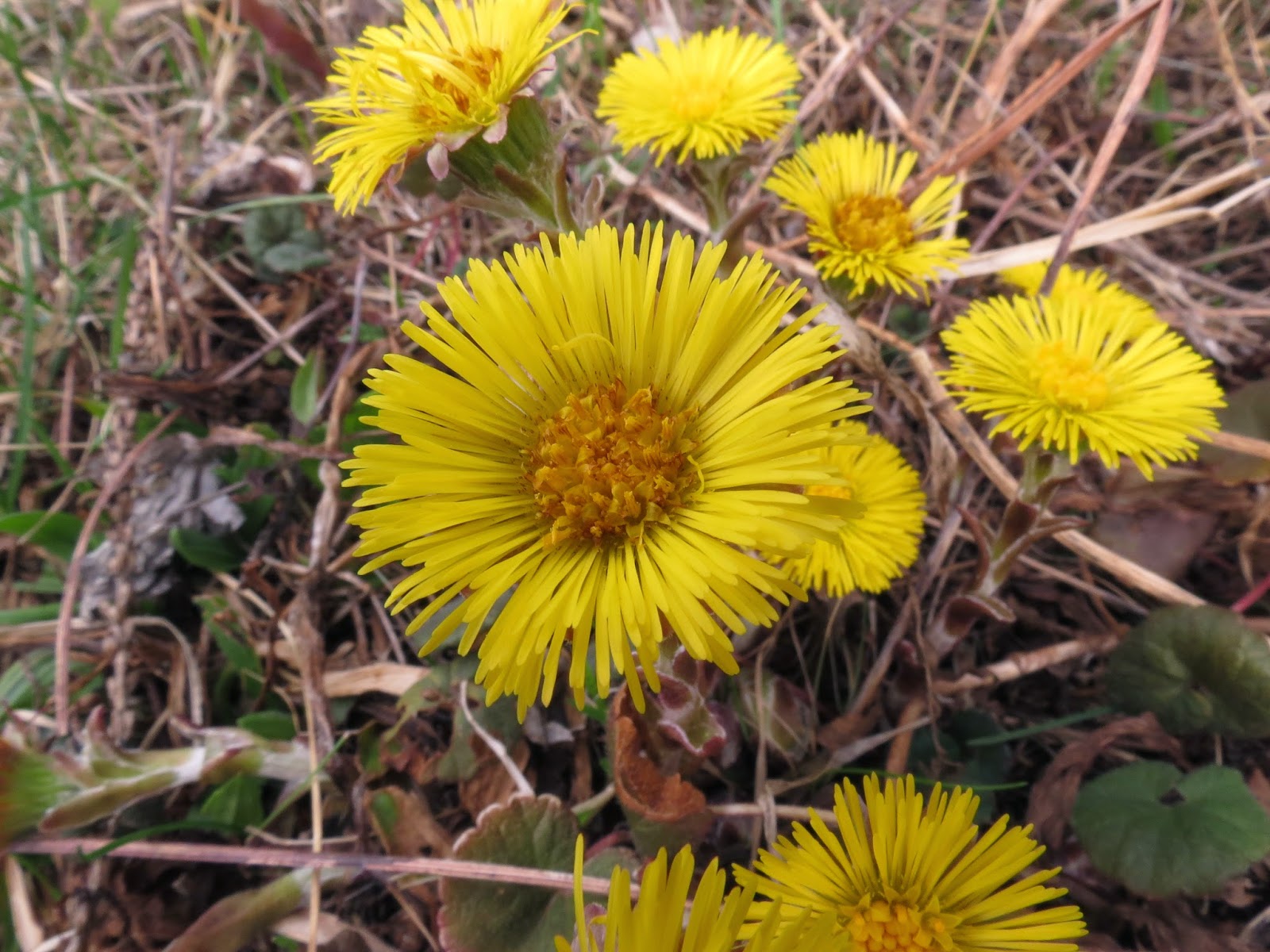 Now, in no particular order, here are a few of the other things I've been seeing recently: 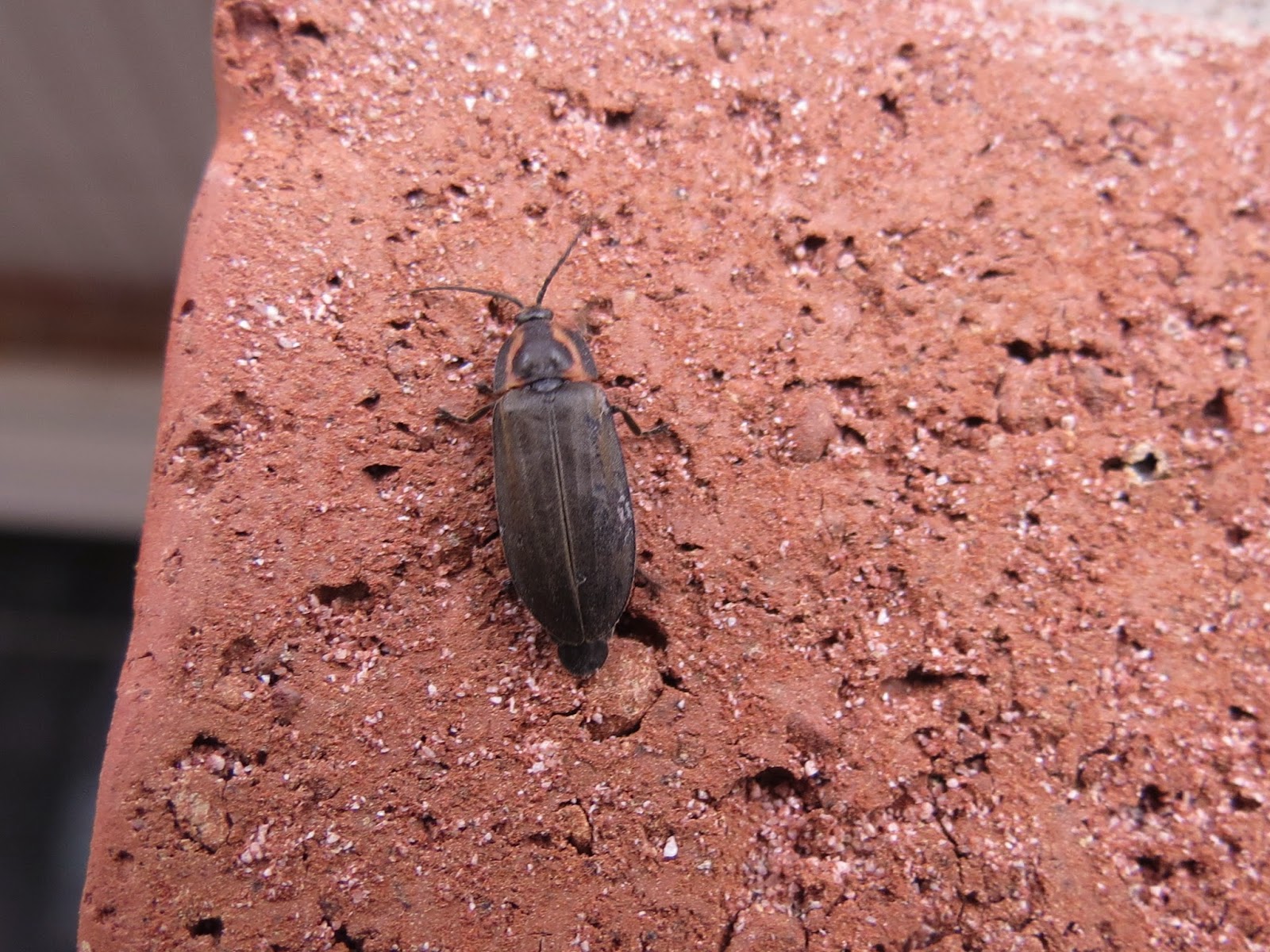 Firefly on the front wall of my house 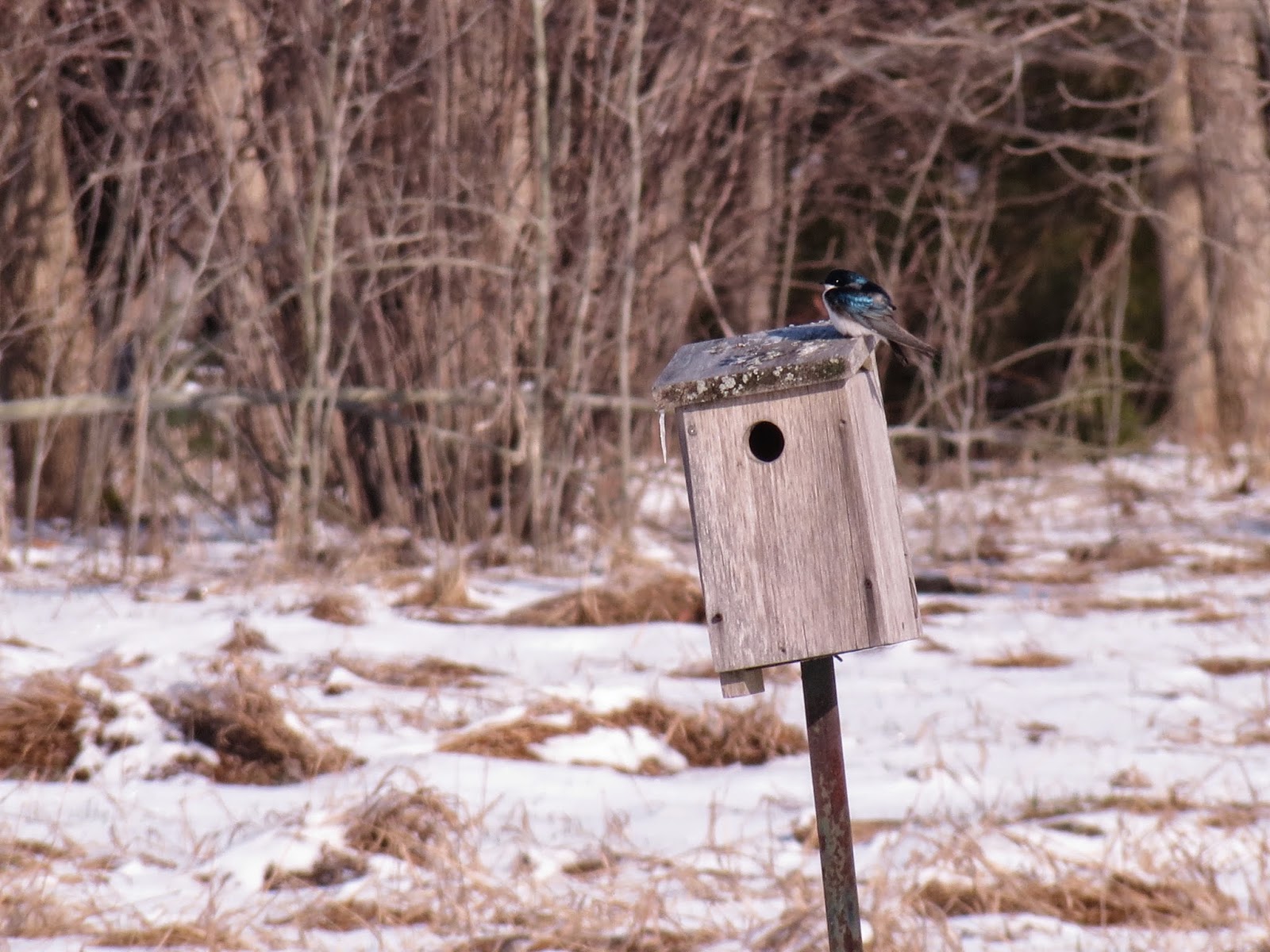 We had a few days of snow and freezing temperatures, and insectivorous birds like this Tree Swallow were struggling. 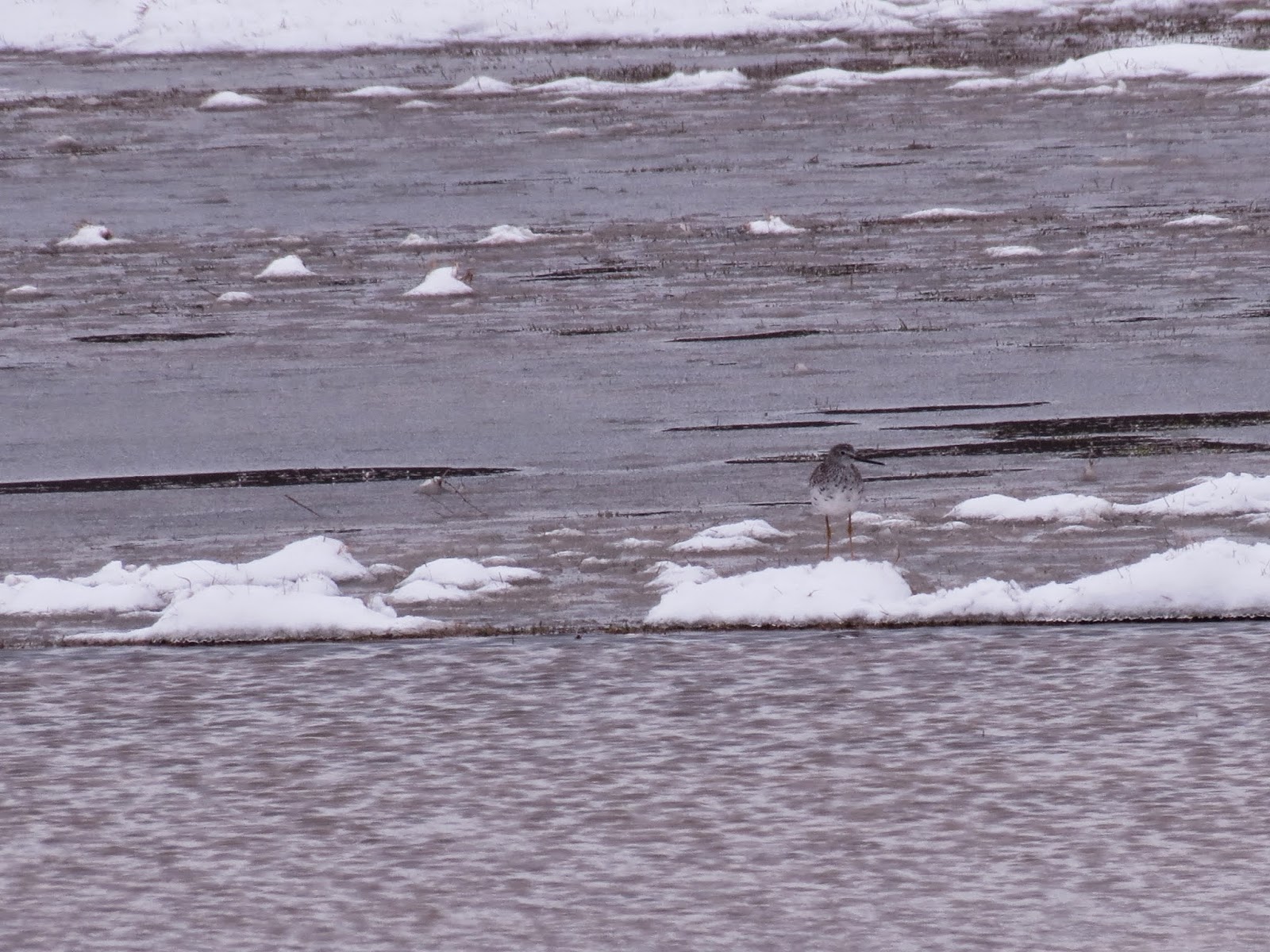 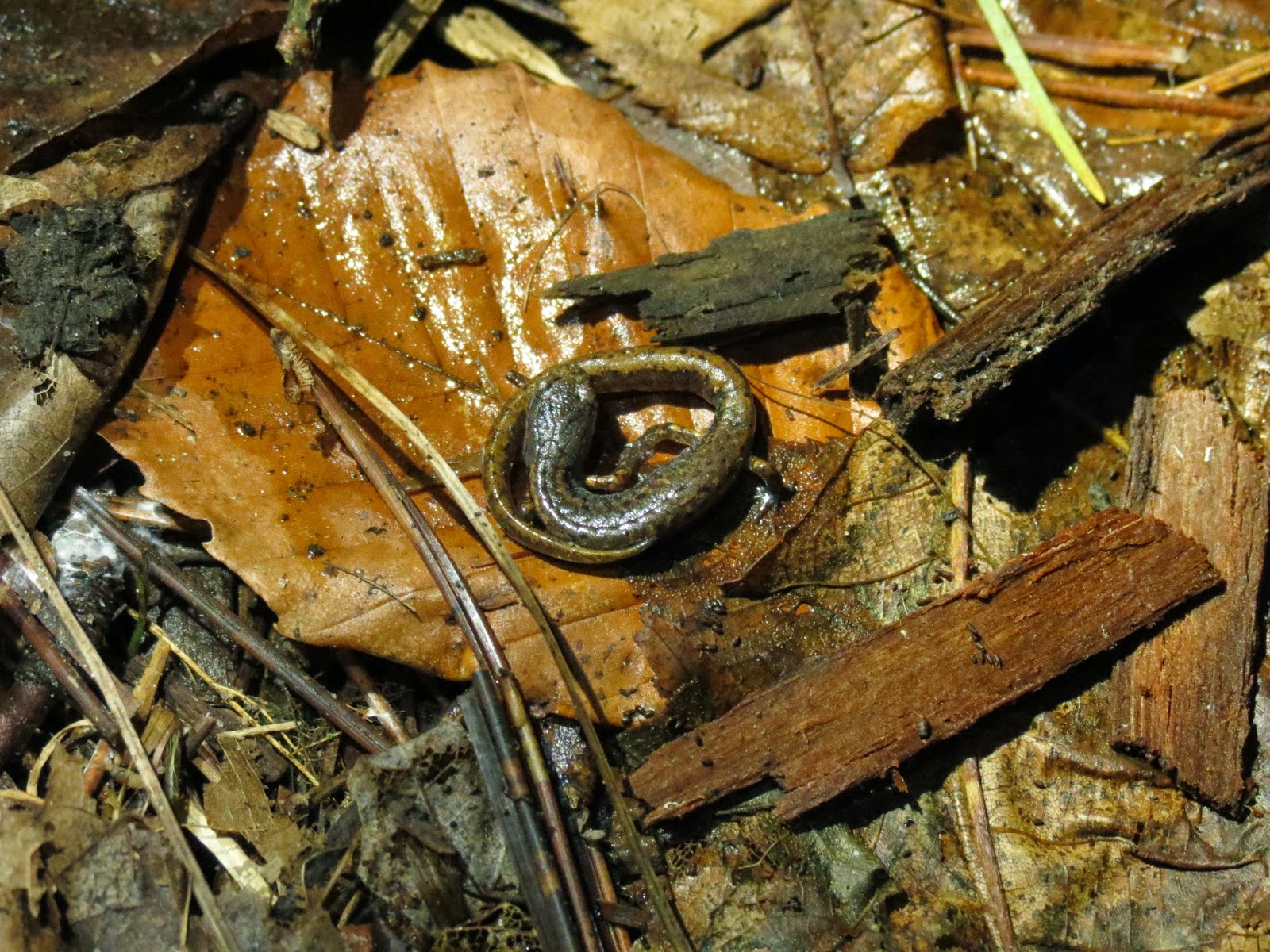 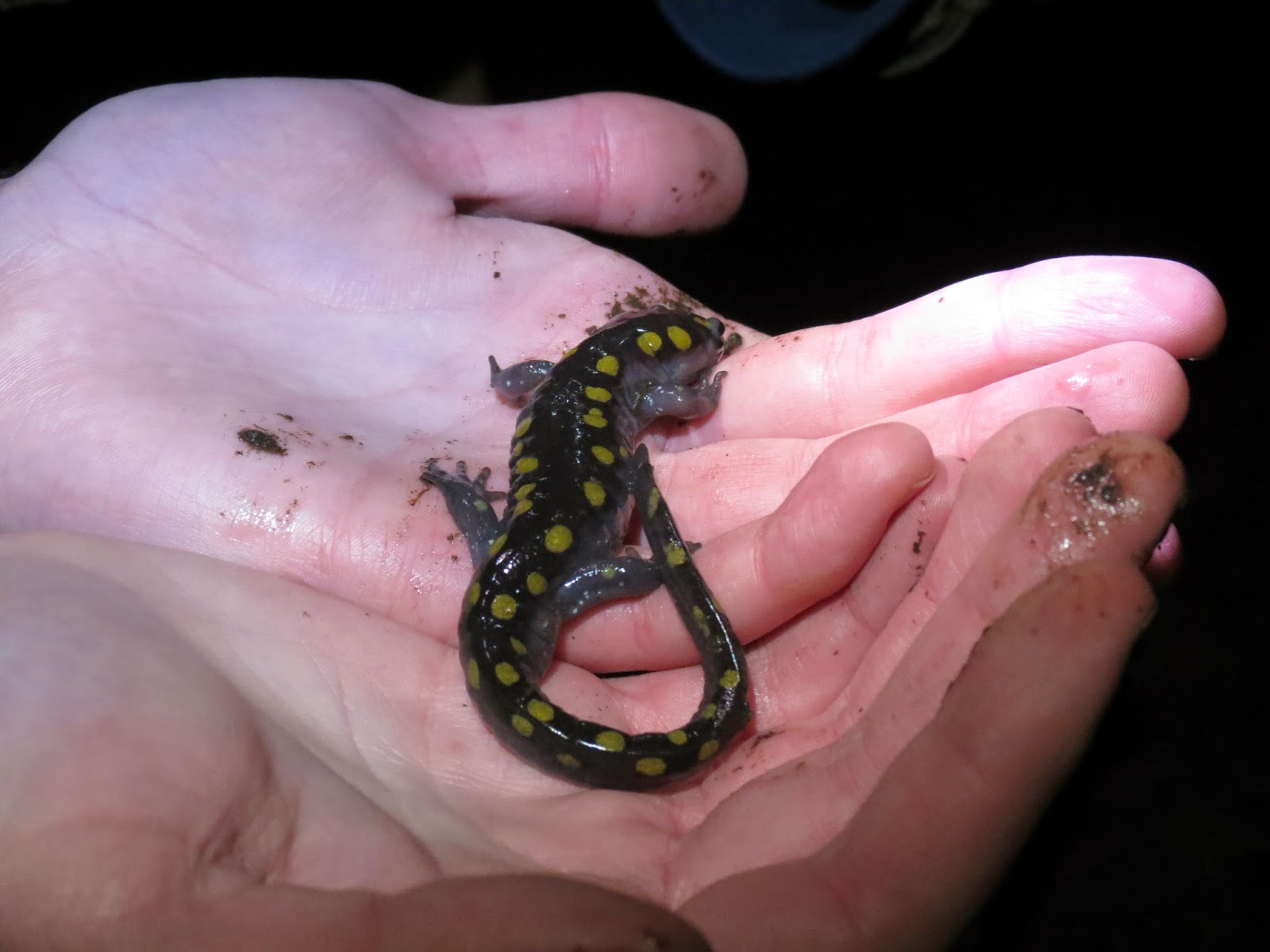 Spotted Salamander. We missed the main wave of salamander migration but still found a few. 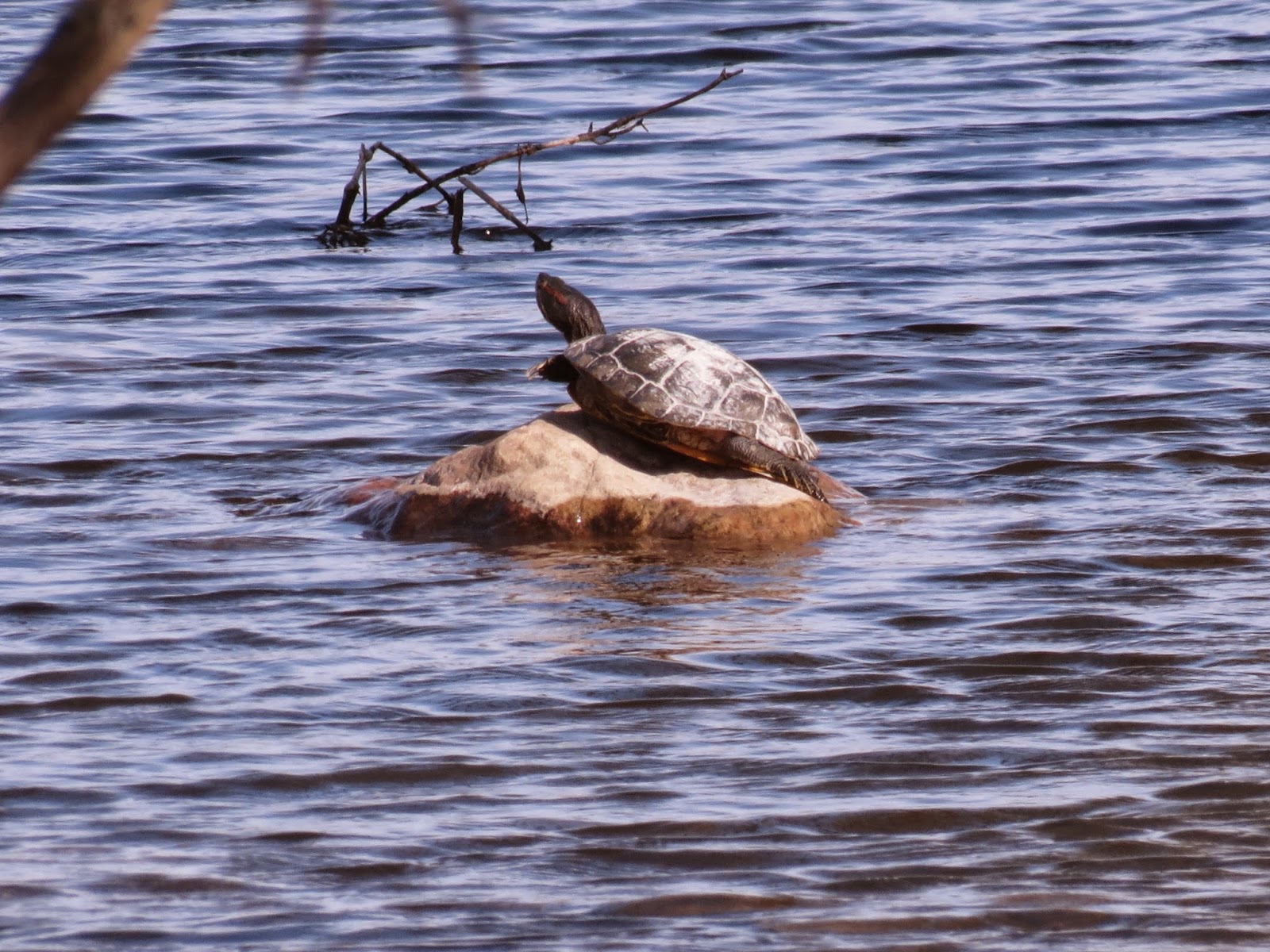 Red-eared Slider - not native to Ontario, but unwanted pets have been released widely. 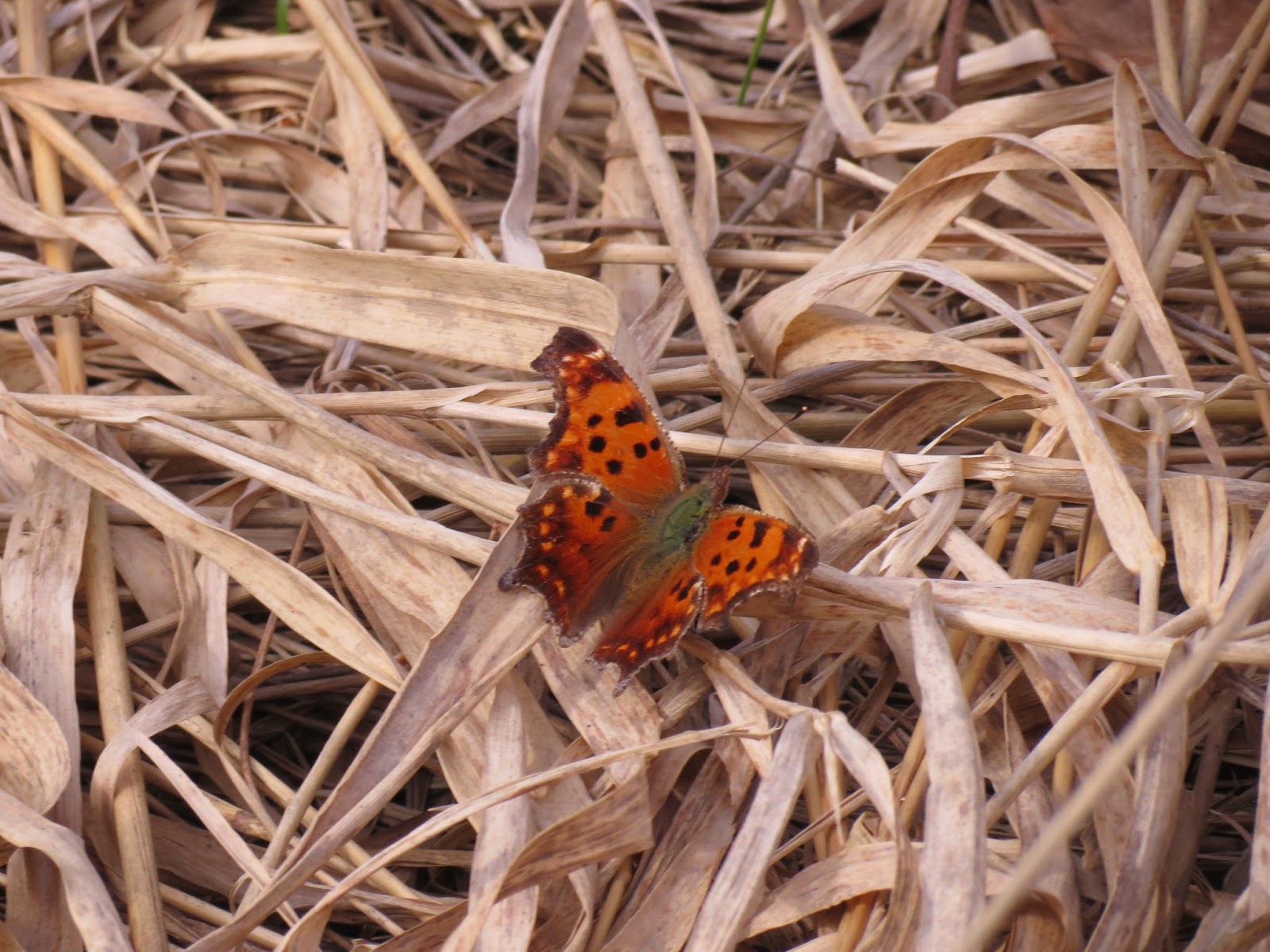 A few butterflies are around. Expected are Mourning Cloaks and this Eastern Comma. 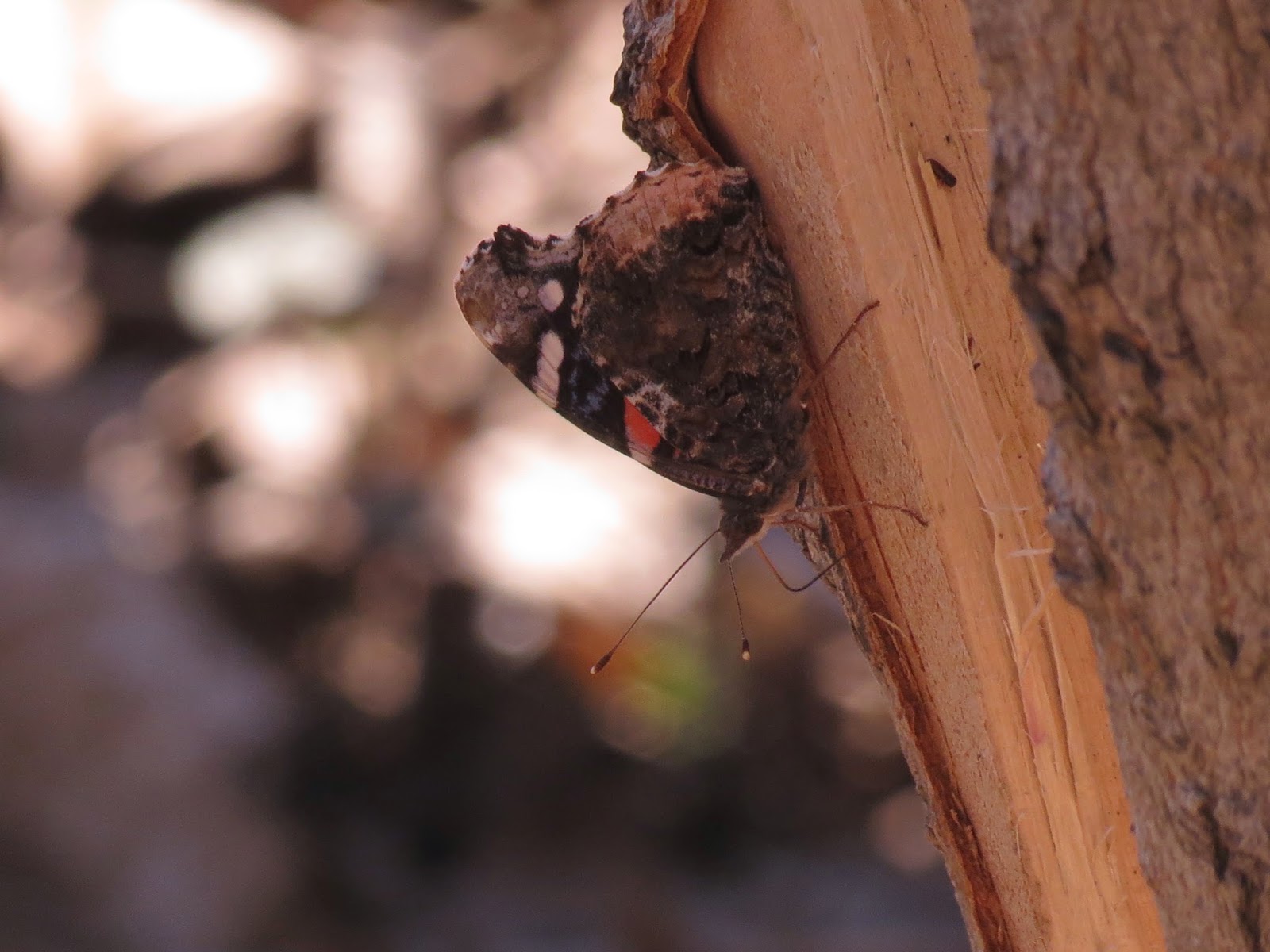 Somewhat less expected was this Red Admiral today in Mississauga, although quite a few have been seen further along Lake Erie with a few further north since we had strong southwest winds a while back.

We are very close to the first waves of Neotropical migrant birds. On April 26, 2009 I had 9 species of warbler in Mississauga.
Posted by Reuven Martin at 10:35 PM 2 comments:

Mimicry by a Purple Finch

In North America, Northern Mockingbird and European Starling are well known as accomplished mimics, but perhaps less well known is that many of our finches regularly mimic other birds.

I took this video of a Purple Finch singing in Guelph. Most of his songs contain an American Robin "chatter" in the middle and a few phrases of Northern Cardinal song near the end, as well some possible Red-winged Blackbird calls, although I'm not totally confident that the latter is really mimicry.

Things are really starting to happen in Southern Ontario just since last week. I've been seeing new birds for the year nearly every day, and the first herps and butterflies are out.

Blackbirds continue to move through the area. Each evening I've been seeing large flocks flying by, and a few days ago I inadvertently discovered where they're going. Below is a fraction of the 1200 birds I estimated being present before they descended to roost in some dense cedar forest.

What's really cool about the whole thing is that several nights later I found myself walking the trails through their roost area well after dark with a few friends while looking for herps (more on that below), and it was obvious that large numbers of blackbirds were present as when we heard them flushing and their wings hitting off branches. It would have been an extremely spooky experience if we didn't know what they were! 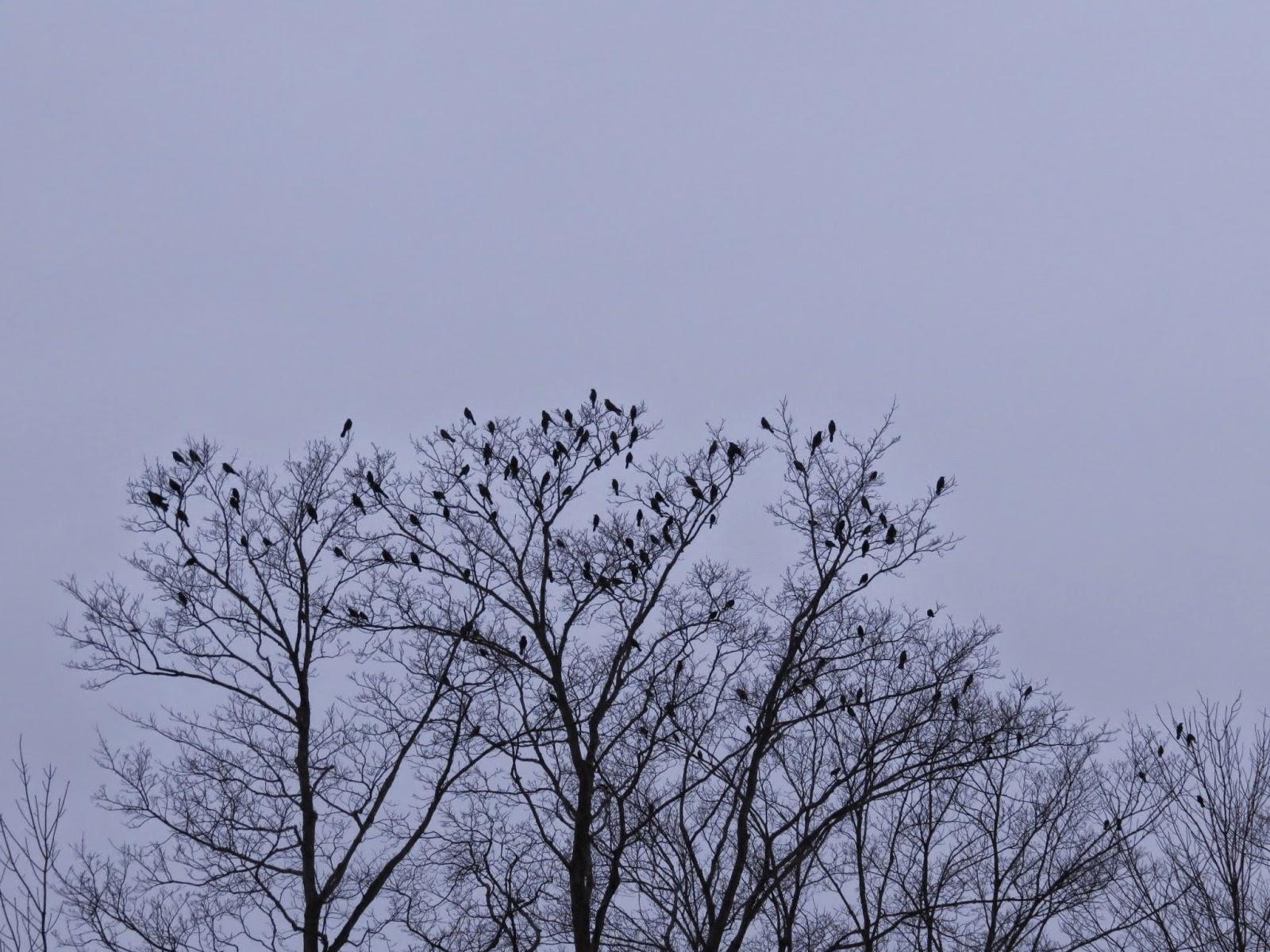 There have been lots of new migrants showing up (among others, Northern Flickers, Yellow-bellied Sapsuckers, Savannah, Chipping, Field and Fox Sparrows, Tree Swallows, Eastern Phoebes and Rusty Blackbirds), but the most notable was this Caspian Tern sitting on the ice at the still-frozen Correctional Ponds. Although this is right on time for this species to arrive, it is not a bird I ever would associate with snow and ice! 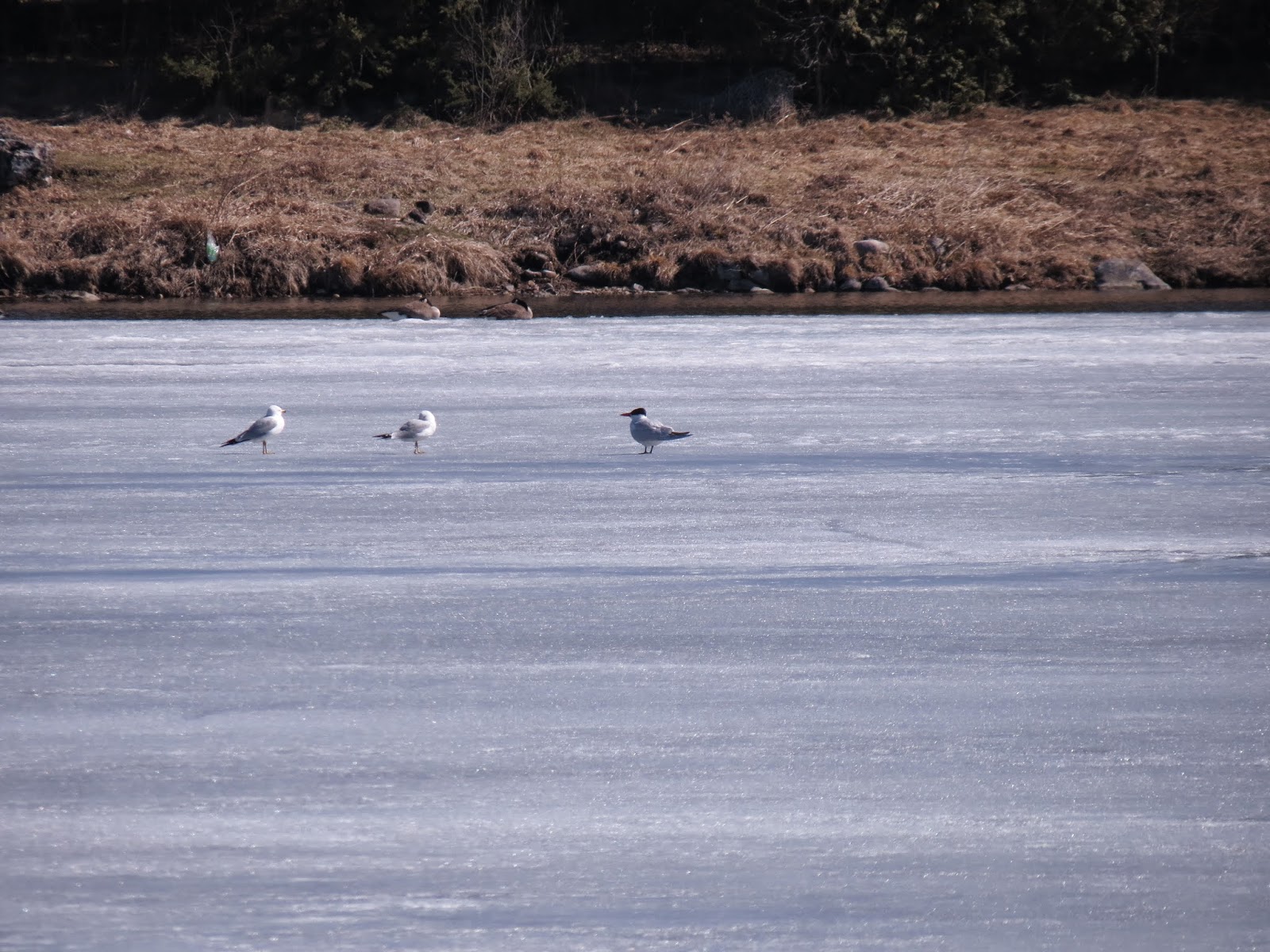 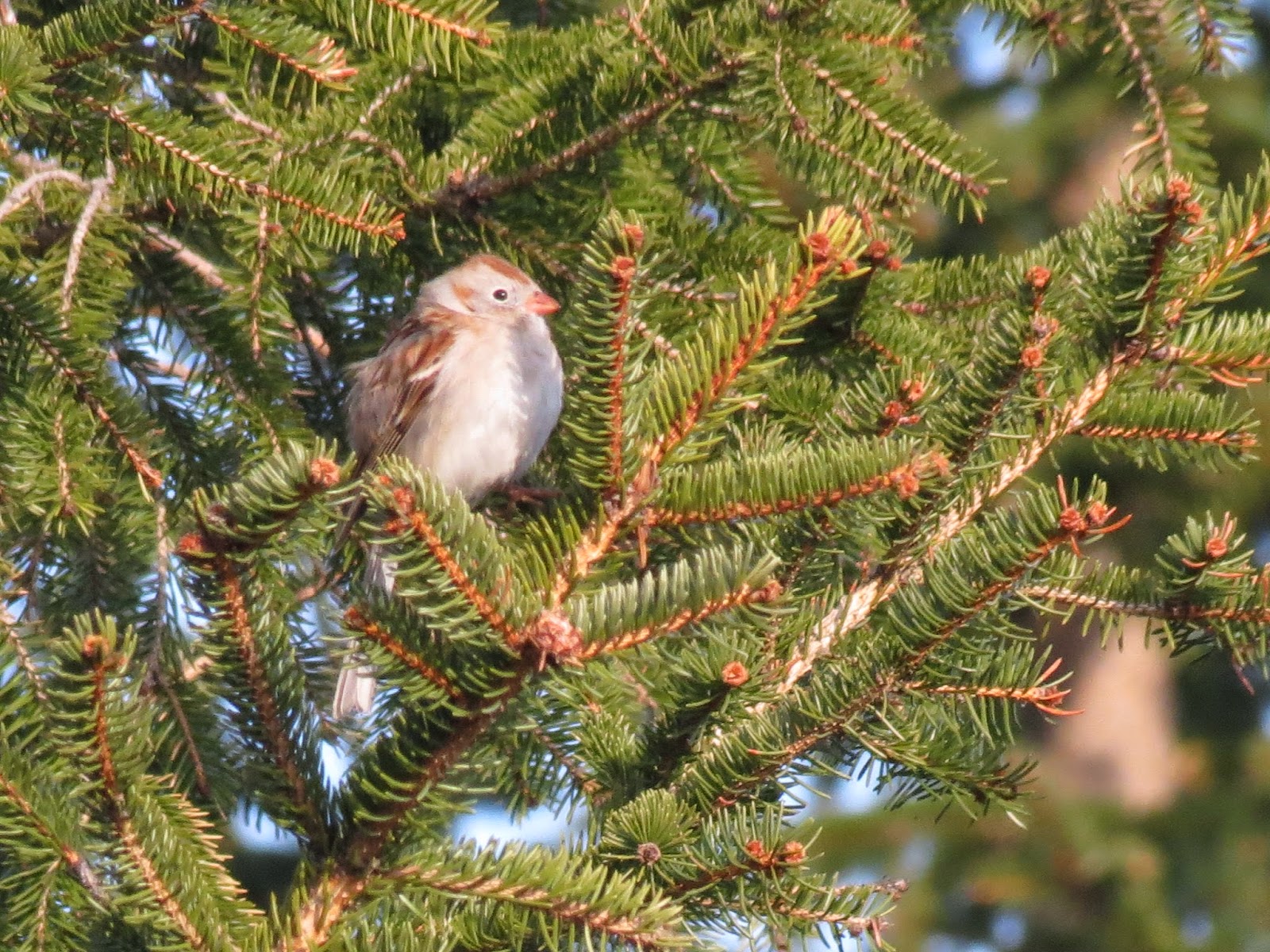 My first Field Sparrow of the year

I've gone out on the three nights this week with rain and reasonably warm temperatures, but last night was the first time we had much success in finding herps. Things are still slow - in about an hour and half of looking the five of us found less than 15 amphibians between us - but it's great to see them again! There is still quite a lot of snow in the woods which is likely keeping amphibians from migrating to their breeding ponds in large numbers. 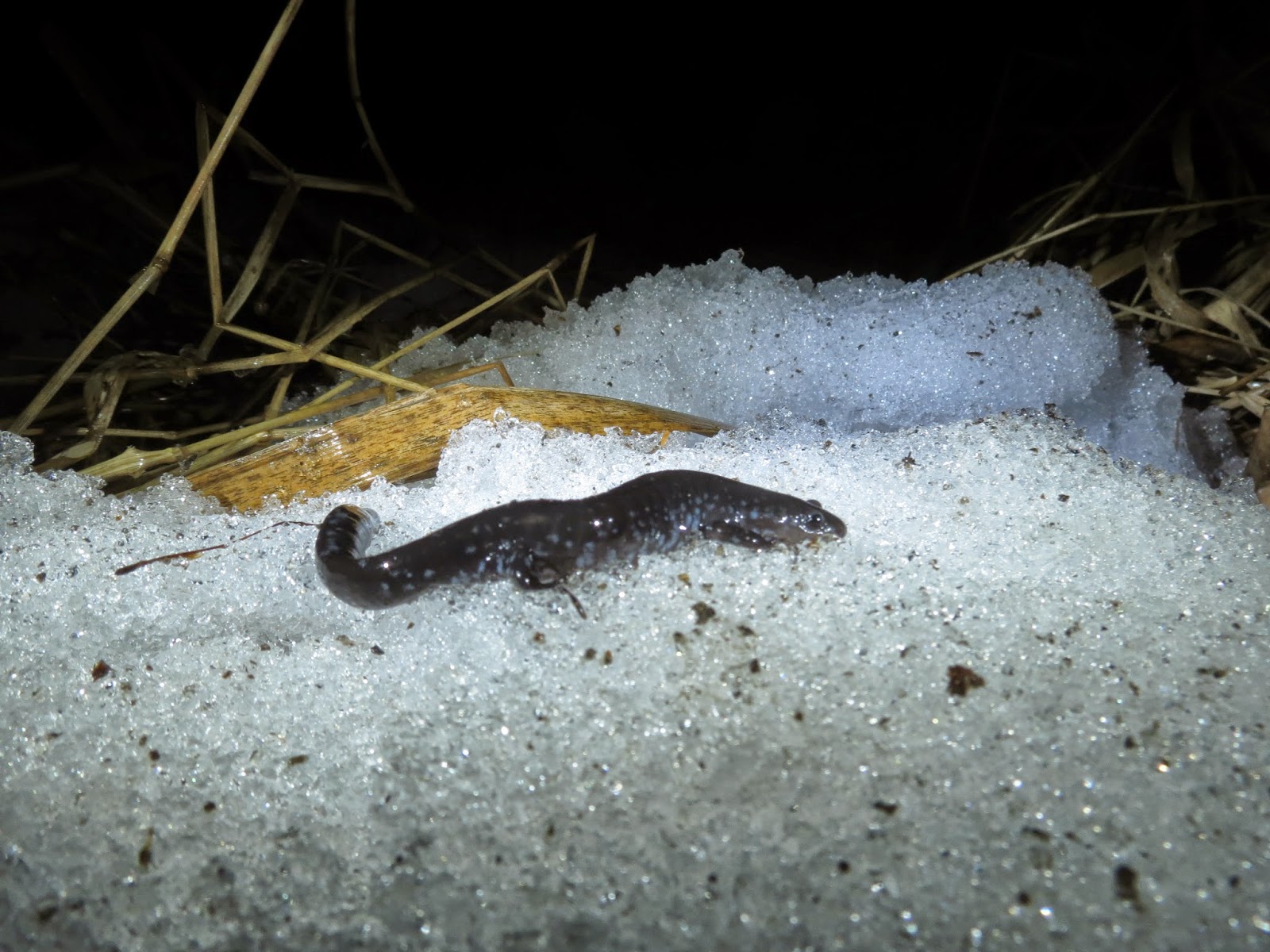 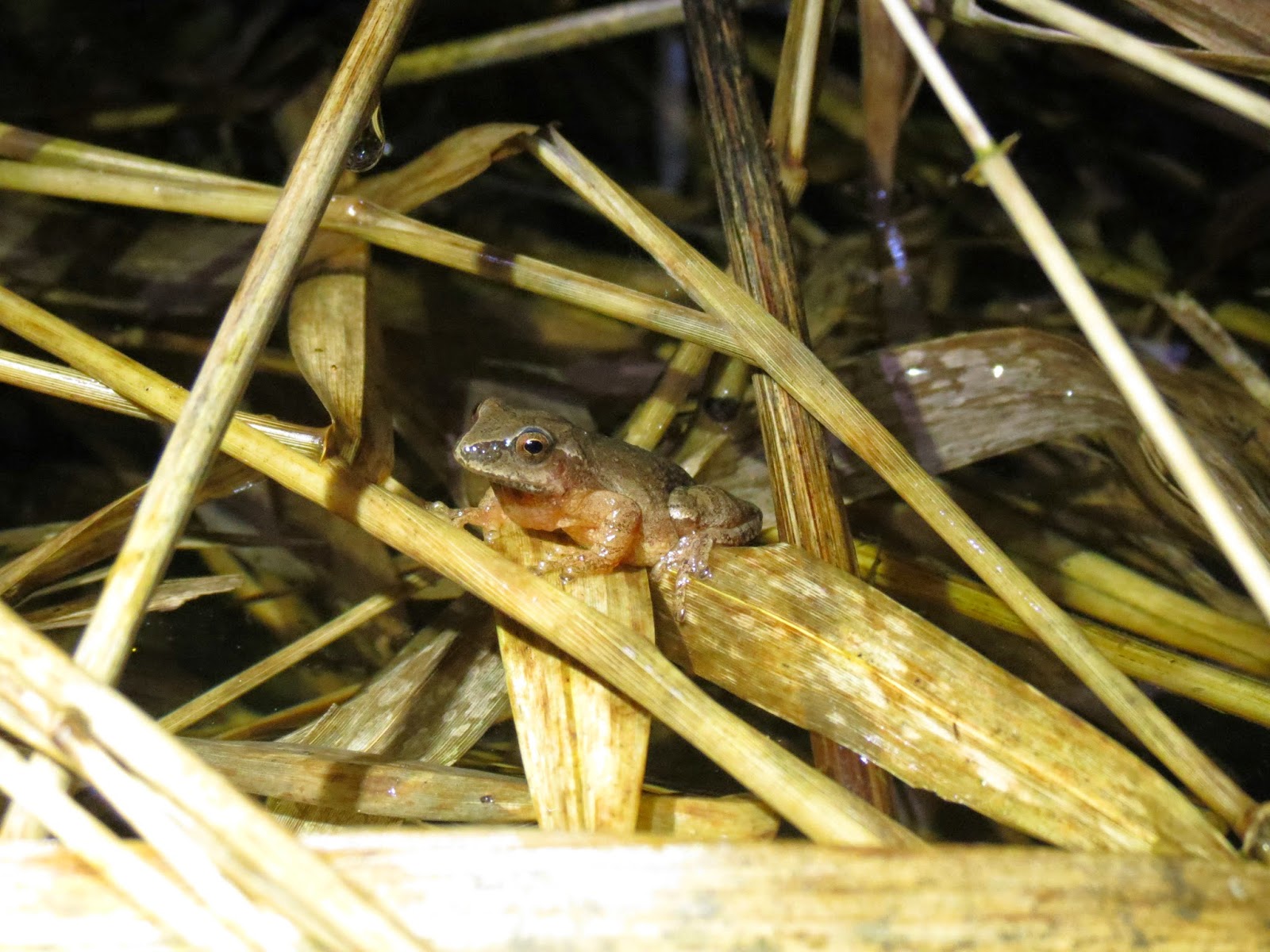 The next few days are looking really good, and luckily I have lots of time to enjoy them!
Posted by Reuven Martin at 3:09 PM No comments:

I haven't been posting much just because I haven't had anything to post. I have been getting out a fair bit, but mostly just for 30 minutes to an hour when I can't stand sitting inside when it's so nice out. Things are definitely happening on the bird front, but I still haven't seen any herps or butterflies this year.

My most exciting recent find has been this group of 4 Cackling Geese (with 3 Canadas in the photo) at the "Correctional Ponds" in Guelph. Note how the bird between the Canadas at back left is fully alert, but is still significantly shorter than the relaxed Canadas. I called the middle bird a Cackling although it was about 20% larger and longer-billed than the other three. Natural variation or hybrid ancestry? 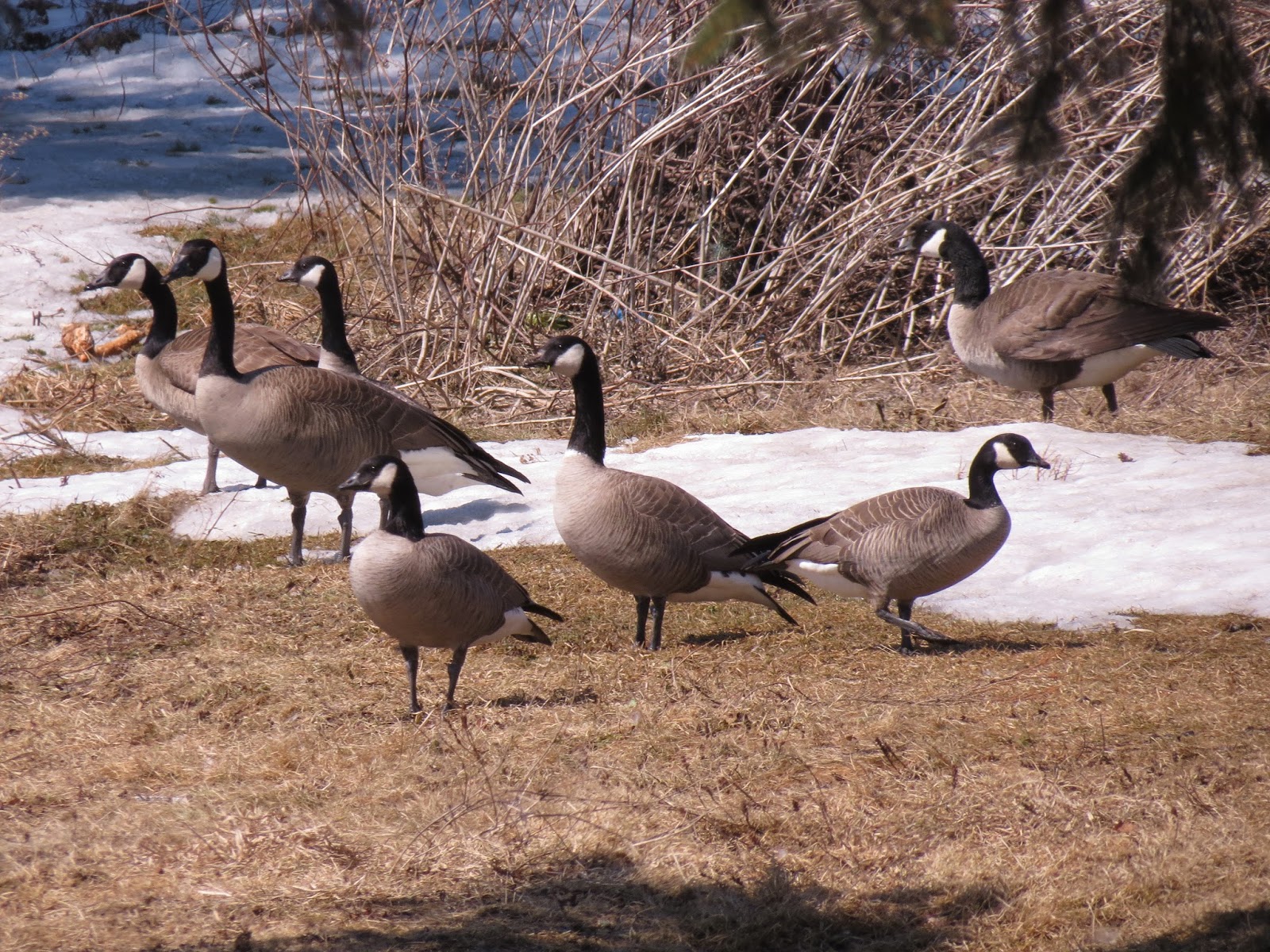 I spent a few minutes hawk-watching at one point to try pick up my first Red-shouldered Hawks of the year, and was quickly successful with two flyovers, as well as a Sharp-shinned Hawk and a few Red-tails and Turkey Vultures. This Red-tail was oblivious to my presence as it hunted from a light pole. Unfortunately, it was looking down on a soccer field with artificial turf, so I can't imagine it was particularly successful! 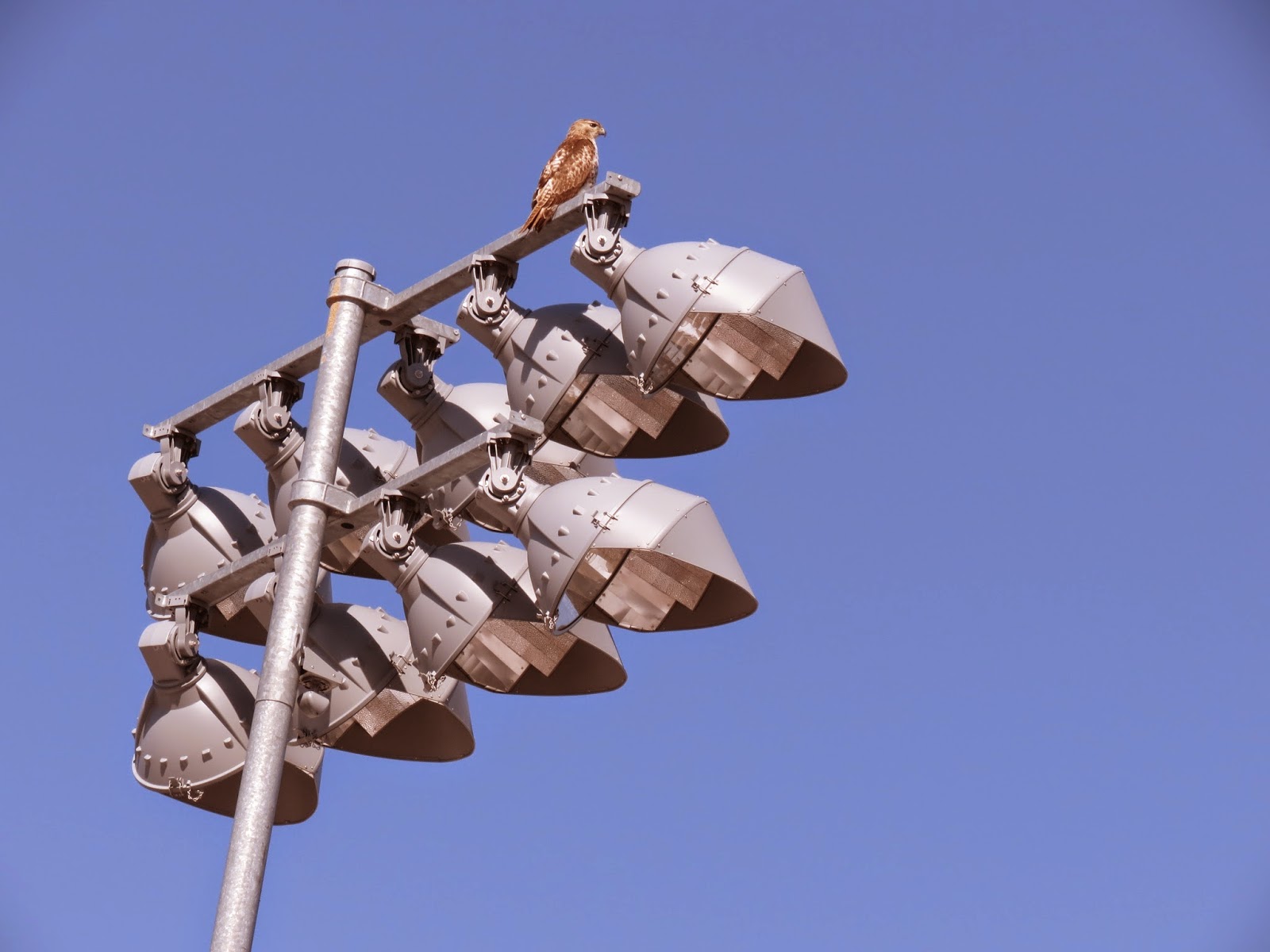 Other new migrants I've picked up recently include Tundra Swan, Great Blue Heron, Tree Swallow and greatly increased numbers of Killdeer, Turkey Vultures, Song Sparrows and Brown-headed Cowbirds. The first warbler (Pine) should be here within two weeks, and half a dozen new species of sparrows will start showing up any time!
Posted by Reuven Martin at 9:58 PM 4 comments: