Although most plants produce their own energy (sugars) from the sun, we have a variety of plants that parasitise other organisms and have no chlorophyll. Note that this is different from the carnivorous plants I've talked about before, which are getting nutrients from another source but are still producing sugars from the sun.

Many trees and other plants rely on associations with fungi to obtain the nutrients they need, in turn providing the fungi with energy. Some plants are able to tap into this fungal network without contributing anything themselves. 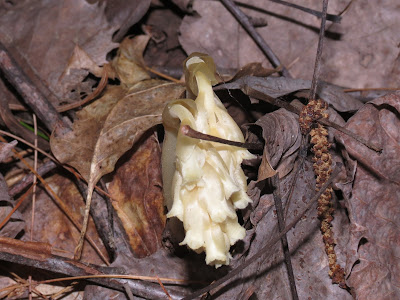 Pinesap is a generally uncommon plant found mostly in pine forests. The only reason this and similar species rise above the ground at all is to flower and produce seed. 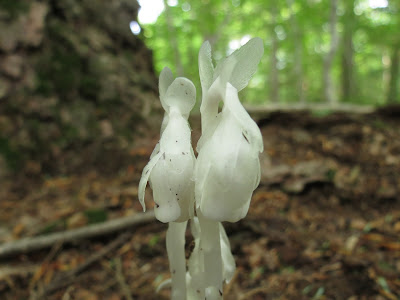 The common Indian Pipe is very similar to Pinesap, but can be found in a wide variety of forests, even including wet treed bogs. 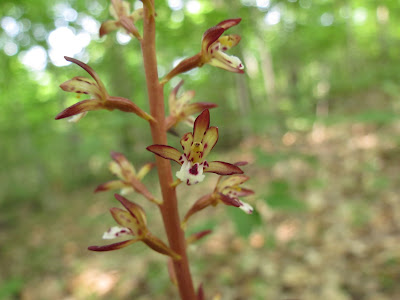 All orchids produce tiny seeds which rely on associations with fungi to germinate and grow for at least the early stages. Some species, like Spotted Coralroot, never develop green leaves at all. 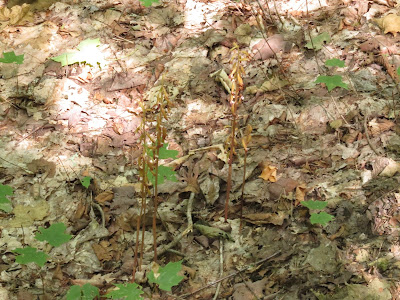 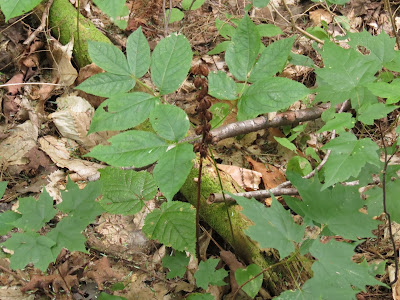 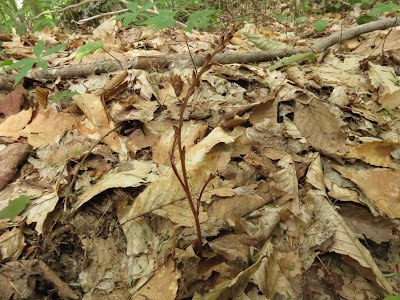 Beechdrops parasitises trees directly, rather than only doing so through fungi like the species above. It is a well-named plant as it is only found in the vicinity of American Beech trees, and attaches directly to their roots.
Posted by Reuven Martin at 12:16 PM No comments:

The west side of Algonquin Park where I work is pretty dismal for reptiles and amphibians, but I've had the chance to visit some other locations recently and have had some great sightings.

Pickerel Frog is a species that has long eluded me, but I finally found one a couple of weeks ago. I was surprised how distinct this species is from Northern Leopard Frog, with no risk of confusion. Although they are more common further south, in our area Pickerel Frogs seem to be restricted to spring-fed waters. 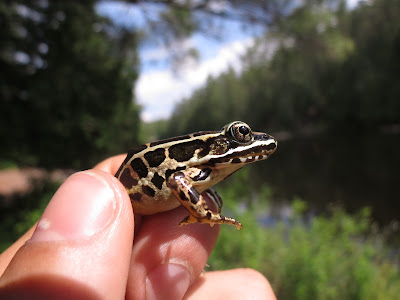 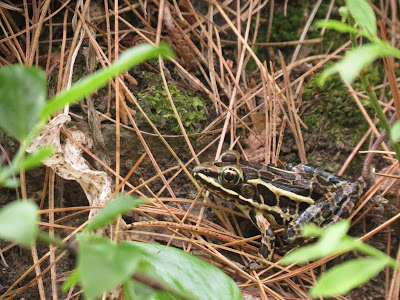 Nearly all of Ontario's reptiles and amphibians can be found along Georgian Bay and somewhat inland to the east. A trip to Muskoka yielded 8 species of snakes despite rainy weather. 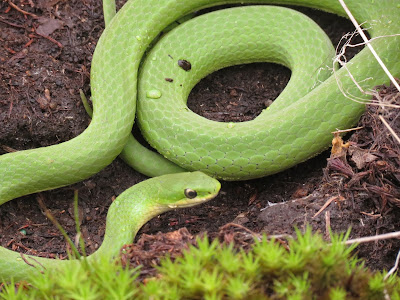 Five-lined Skinks were everywhere in barren rocky areas. Although they have a fairly restricted range in Ontario, skinks often seem to be abundant where they are found. 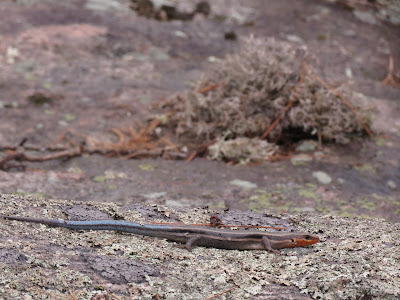 The jewel of the barrens is the Massassauga Rattlesnake. This big individual was sheltering from the rain under some rocks. 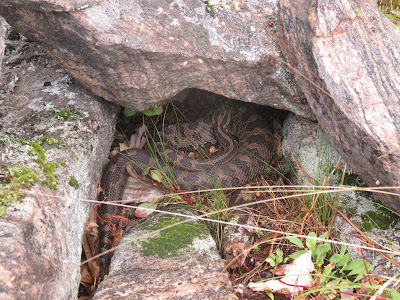 Posted by Reuven Martin at 6:12 PM No comments:

Botany has always been a very casual pursuit for me - although I'll identify cool things as I find them, I've never really made much effort to search for particular species. This year I decided to put quite a bit of effort into looking for orchids, which has been very enjoyable so far.

One of the most common, and certainly the most obvious orchids in Algonquin Park is the Pink Lady's Slipper or Moccasinflower, found in a variety of coniferous habitats in June. 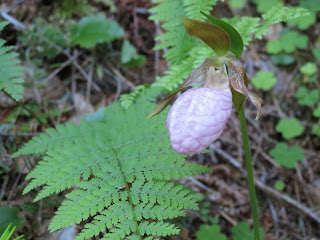 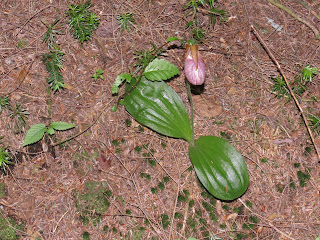 Dwarf Rattlesnake Plantain is fairly similar to the other rattlesnake plantains, but can be readily separated by its small size. For size reference, my phone is about 13 cm x 7 cm. 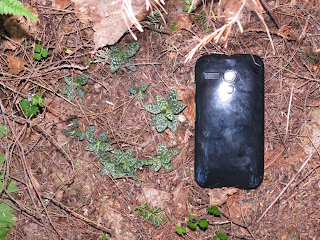 The flowers will open later in the summer, and I am hoping to catch them in bloom. 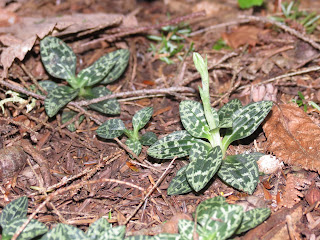 Another species that isn't yet in bloom is the Large Round-leaved Orchid - an appropriate name if I ever heard one! 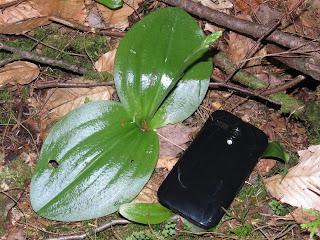 Not all orchids are nearly so obvious. Green Adder's Mouth is a tiny and unspectacular orchid under 10 cm tall. I found a few individuals just coming into bloom in a pine plantation on the East Side of Algonquin Park. 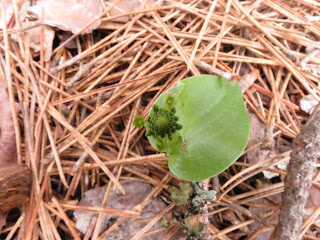 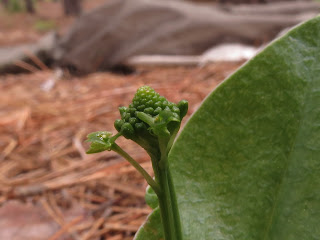 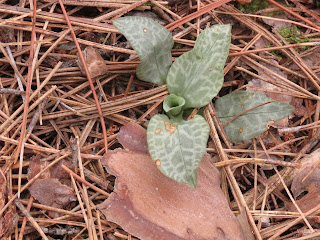 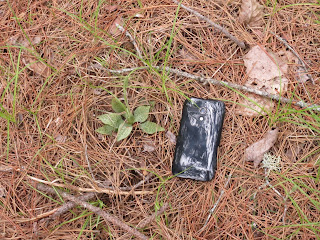 I believe these are Club-spur Orchids, another unassuming species. They are growing in a open, somewhat boggy lakeshore, and unfortunately I am not able to return to the site to see them in bloom. 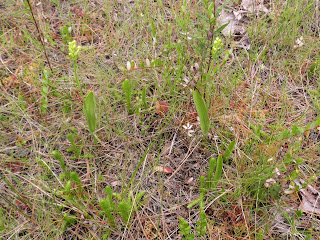 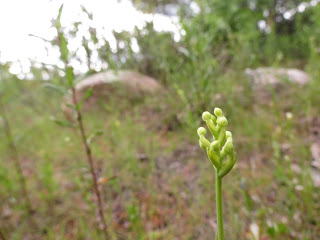 In stark contrast to the above species, Grass-pink or Calopogan is incredibly showy. The flower's are twisted 180 degrees compared to most other orchids, although developmentally it is more accurate to say that all other orchid flowers are twisted! 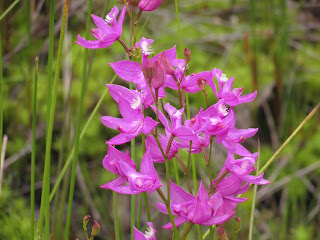 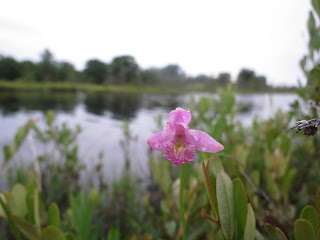