As you move into the extreme south of Texas, you come into range of a large suite of species that, north of the border, are only found in this small area (some species may also range into southern Arizona). As an example, the Aplomado Falcon, only present as a small reintroduction. 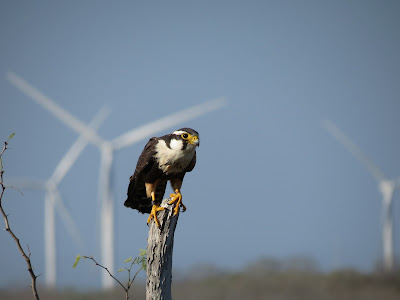 I thought this shot with wind turbines in the background was cool. I've never really understood how anyone could consider these striking structures an "eyesore".

Harris's Hawk was a common sight throughout the area. This species is unique among raptors in living and hunting in small groups, and it was pretty rare to see a lone individual. 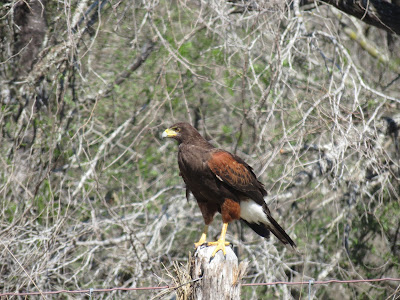 Numbers of shorebirds were much lower once we left the coast, but there were still some to see, such as this Long-billed Curlew in an arid grassland. 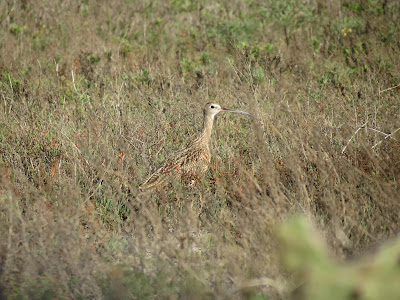 We saw lots of lizards. This big one is a Texas Spiny Lizard. 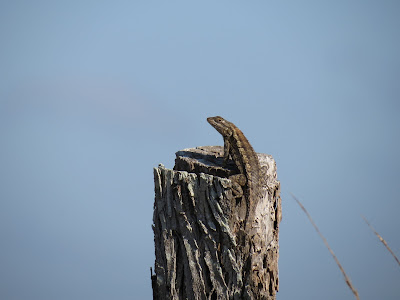 In the same genus (Sceloporus) is Rose-bellied Lizard. We saw three members of this genus in all. 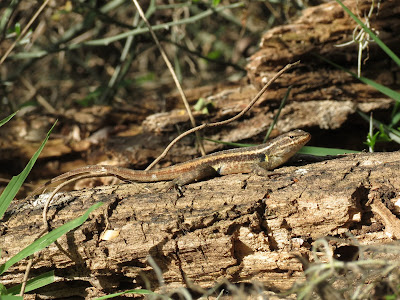 Red-eared Slider is the common turtle sold in pet shops, and is widely released in Ontario, but it was nice to see them in their original historic range. We also saw Rio Grande Cooters on the banks of their namesake river. 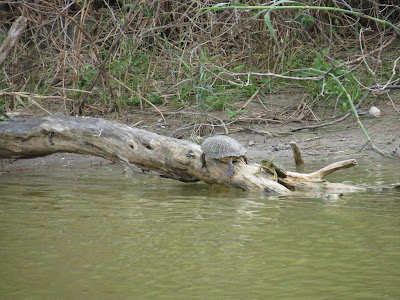 We spent lots of time right along the Rio Grande. Here we were scanning the Mexican shore for kingfishers, two species of which barely range north into this part of Texas. 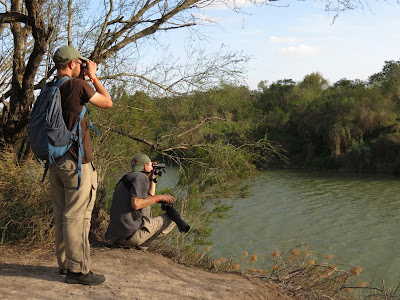 One of these species is the tiny Green Kingfisher, about a quarter of the weight of a Belted. 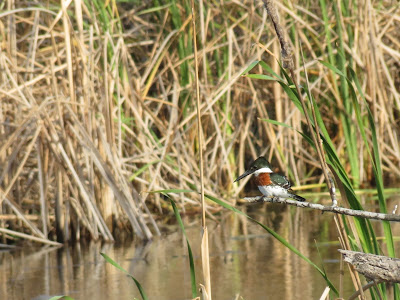 Mistletoe (Phoradendron sp.) is a common sight in much of Texas. This parasitic plant obtains water and nutrients from its host tree, while still photosynthesizing for itself. 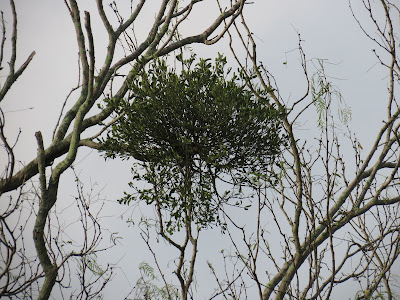 Yuccas were very common in many areas, but we only saw a few in flower like this. I'm not sure if we were out of season or if there's another explanation. 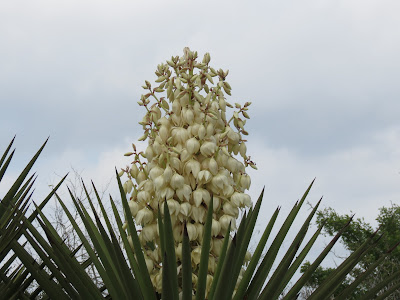 Here's a couple of habitat shots. This is a gorgeous semitropical thorn forest, home to abundant Green Jay, Black-crested Titmouse, Great Kiskadee, and many other species. 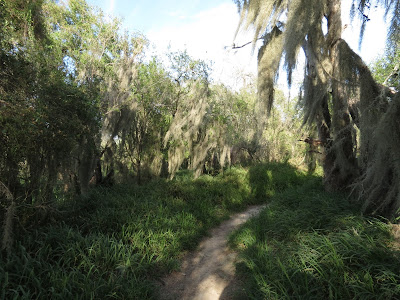 And on the other end of the spectrum, a typical arid desert/shrubland type habitat (not sure exactly how this should be classified). Typical birds here include Verdin, Bewick's Wren, Curve-billed Thrasher, Pyrrhuloxia, and, like seemingly every other random point in Texas, abundant Northern Mockingbirds. 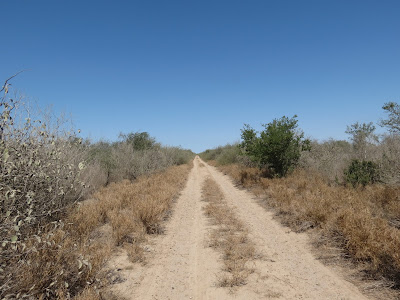 This old agricultural field is being restored to something like the habitat above. 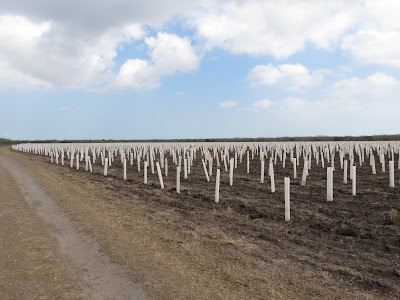 Three species of oriole can be expected in the area in winter. Hooded is only present in very small numbers, and we only saw this single bird. 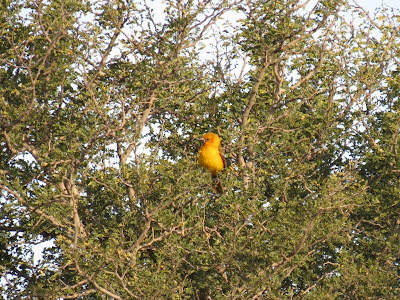 Audubon's Oriole is a little more common, but we still only saw this one, and only after deliberately going to see it. 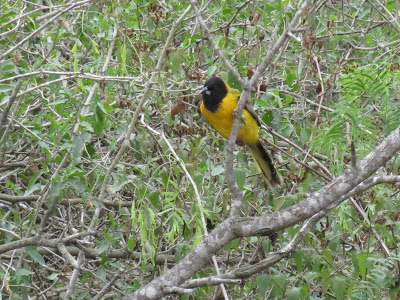 Altamira Orioles are quite common on the other hand, especially around bird feeders. 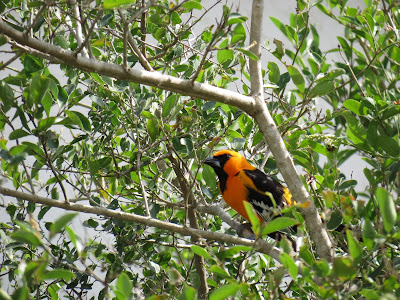 This Great Kiskadee was photobombed by an Altamira. 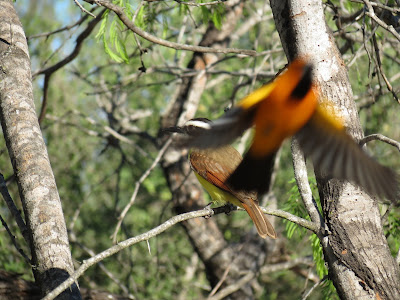 Oddly enough for a flycatcher, Great Kiskadees will eat fish, rodents and frogs, and as we found out peanut butter at bird feeders. 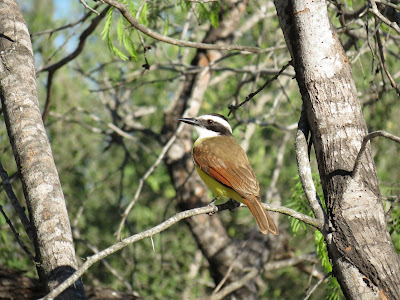 Staying on the flycatcher theme, two species of nearly identical kingbird winter in this area. I expected Couch's and Tropical Kingbird to be very common, but we only saw a few of each. These are Tropical, although I only know that because they were calling. 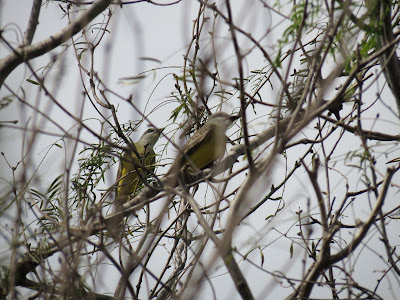 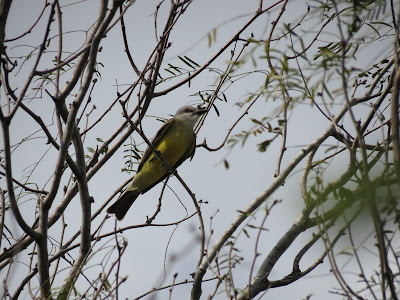 No identification issues with the brilliant Vermilion Flycatcher! We saw lots of adult males like this, but only a single female (which are much duller). I assume they must winter further south. 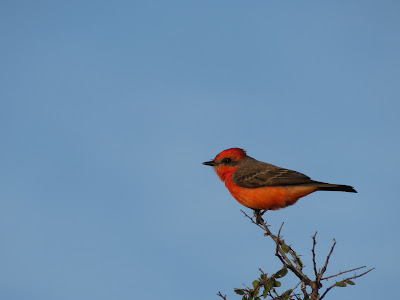 Male Cinnamon Teal are brick red all over and easily identified. Females are almost identical to female Blue-winged Teal, but there are differences in head pattern and bill shape, and I had a lot of fun trying to separate them. These are Cinnamon Teal. 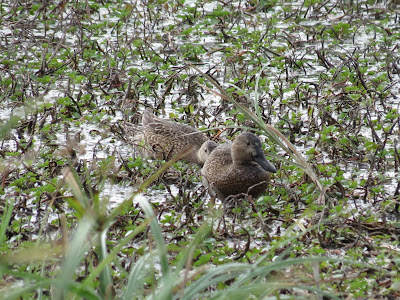 More to come!
Posted by Reuven Martin at 9:12 PM 3 comments: