As most of this blog's readers likely already know, this winter is turning out to be phenomenal from Snowy Owls in Southern Ontario. An excellent breeding season in Northern Quebec seems to be the explanation (see this post from a Newfoundland birder).

Over the past weekend, I was able to see a total of 11 Snowy Owls across Mississauga, Oakville, Burlington, Hamilton, Grimsby and St. Catharine's. 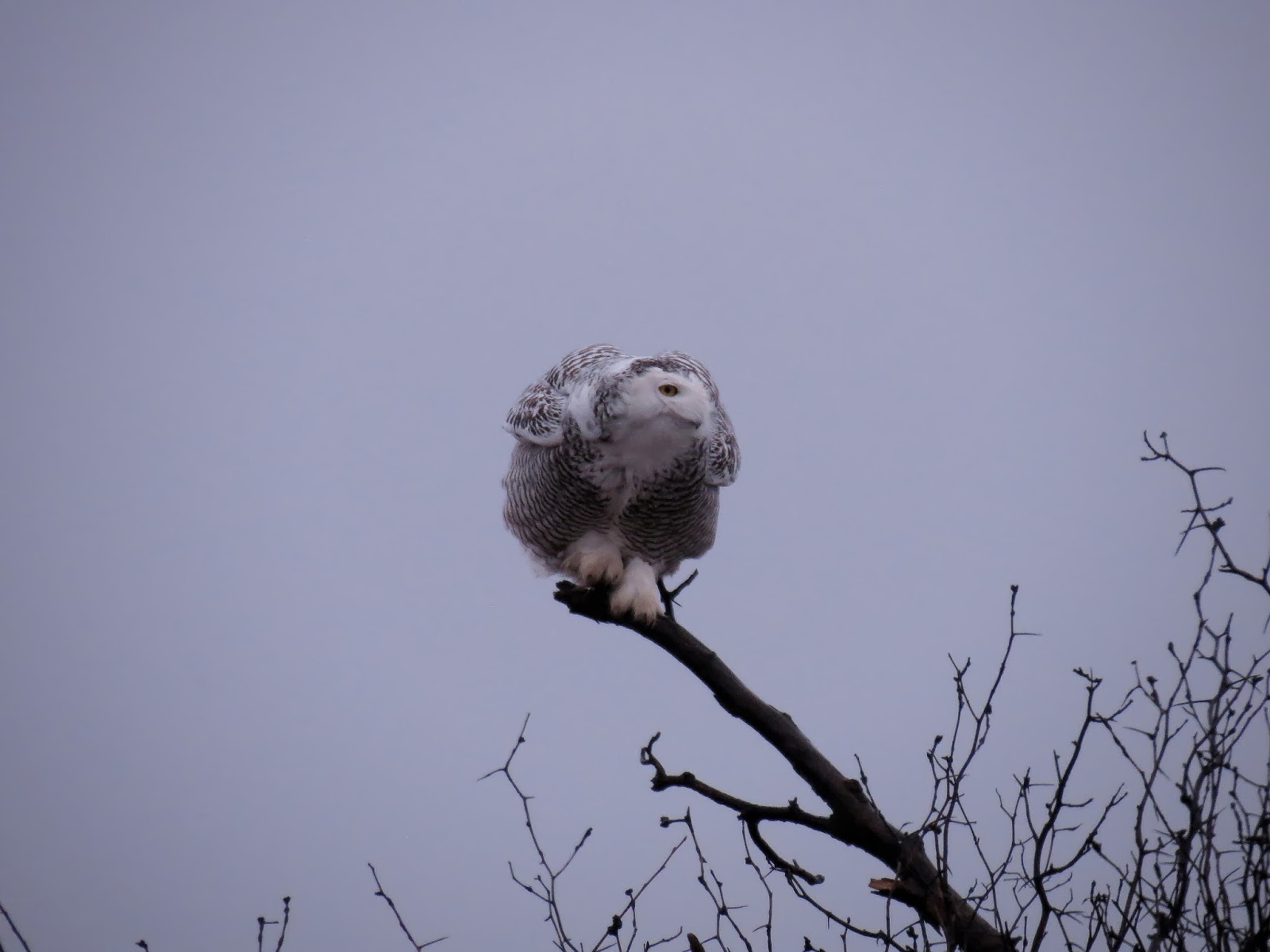 I love their feet (St. Catharine's) 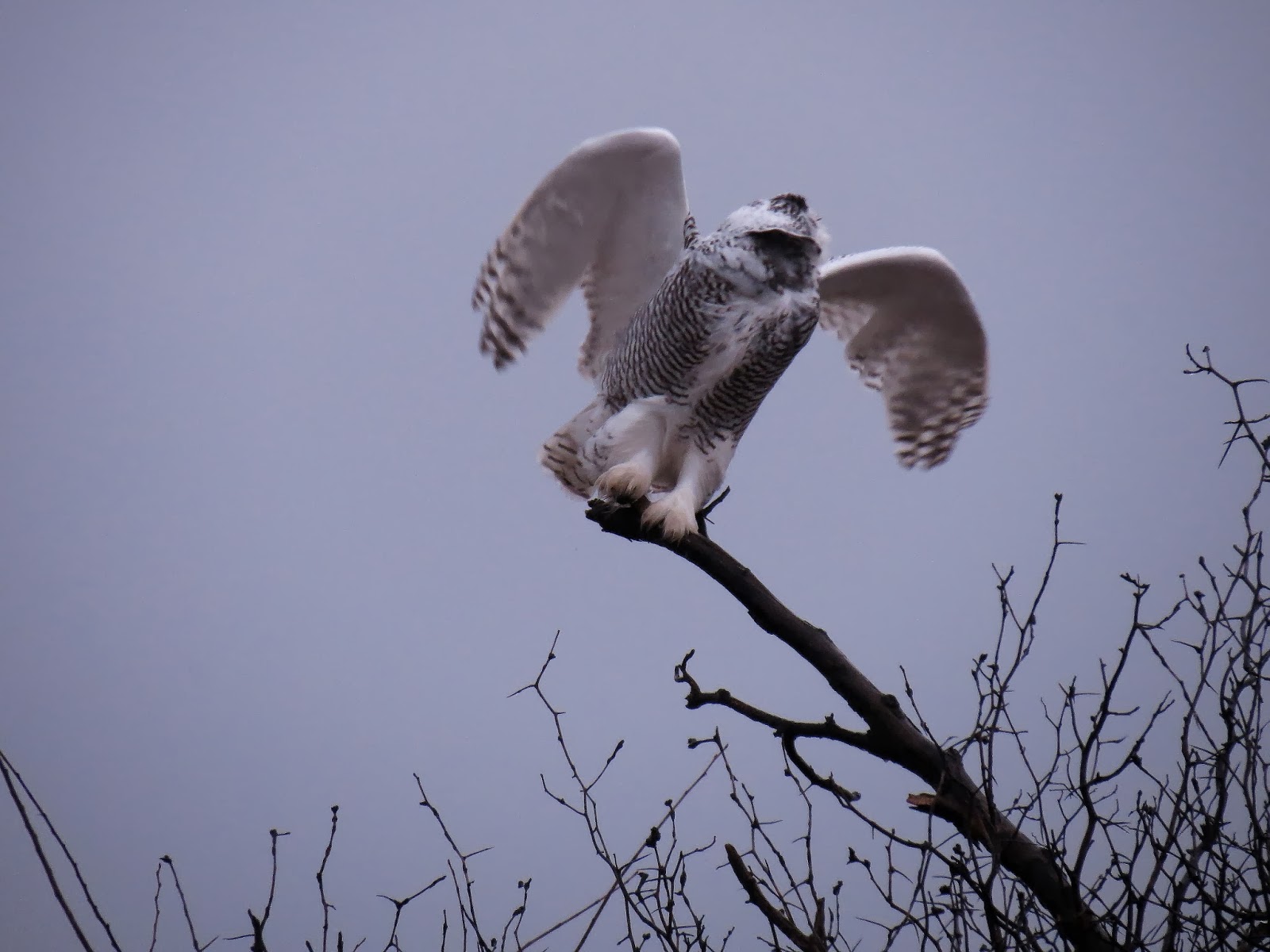 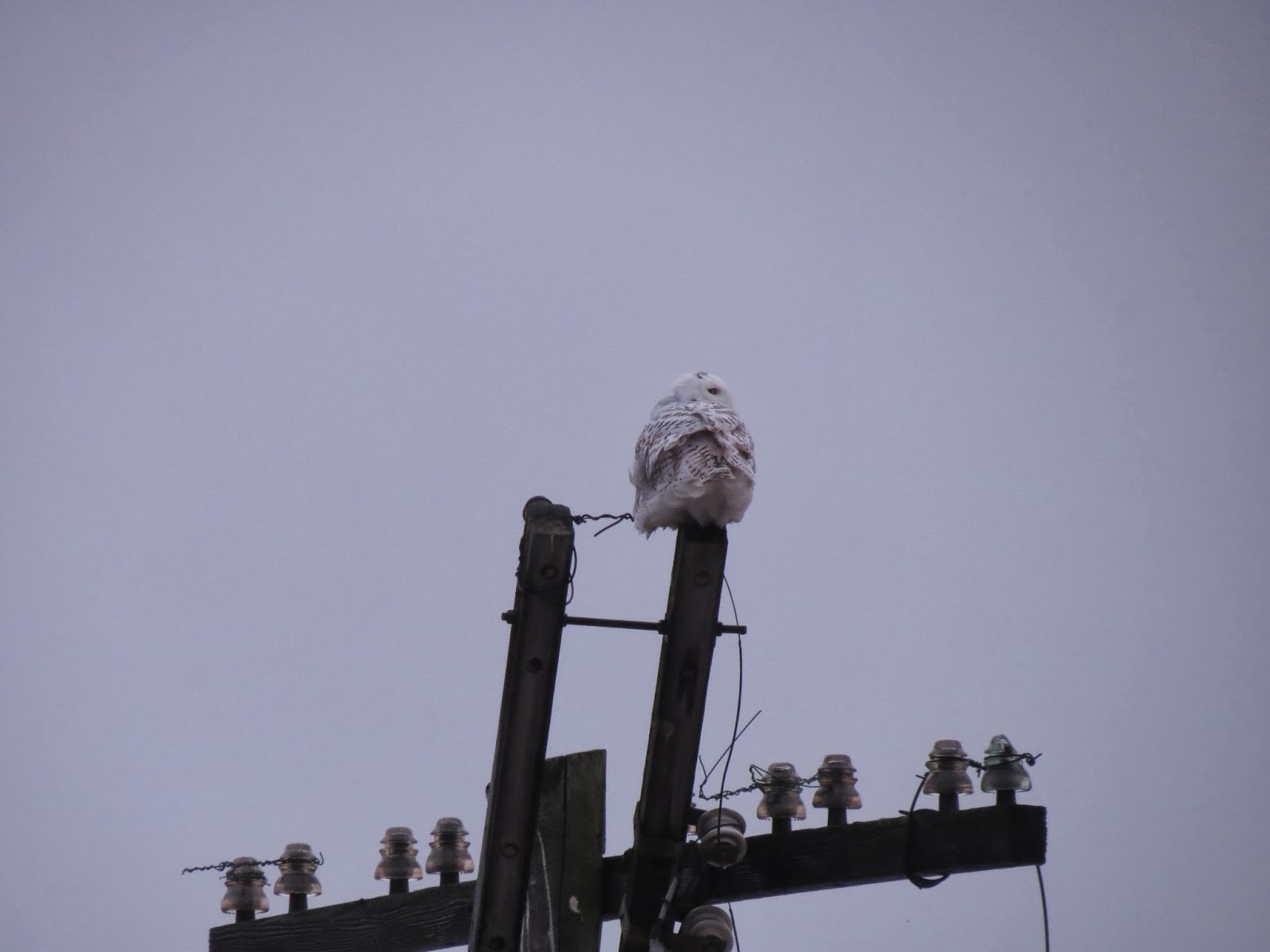 Another bird from the same field in St. Catharine's (out of a total of 3!) It was a special weekend for another reason too. Back in summer 2010 I participated in the Young Ornithologist's Workshop at Bird Studies Canada. This weekend things worked out that 5 of the 6 participants could meet up again for some birding: Emma Cushnie, Mark Dorriesfield, Muhammad Zwink, Shyloh Van Delft and I.

We had a great time, finding 25 species of waterfowl including a female King Eider, 8 species of gull including a first-winter Thayer's at Niagara Falls, and a Short-eared Owl flying around at dusk. This was all overshadowed by the number of Snowy Owls around! 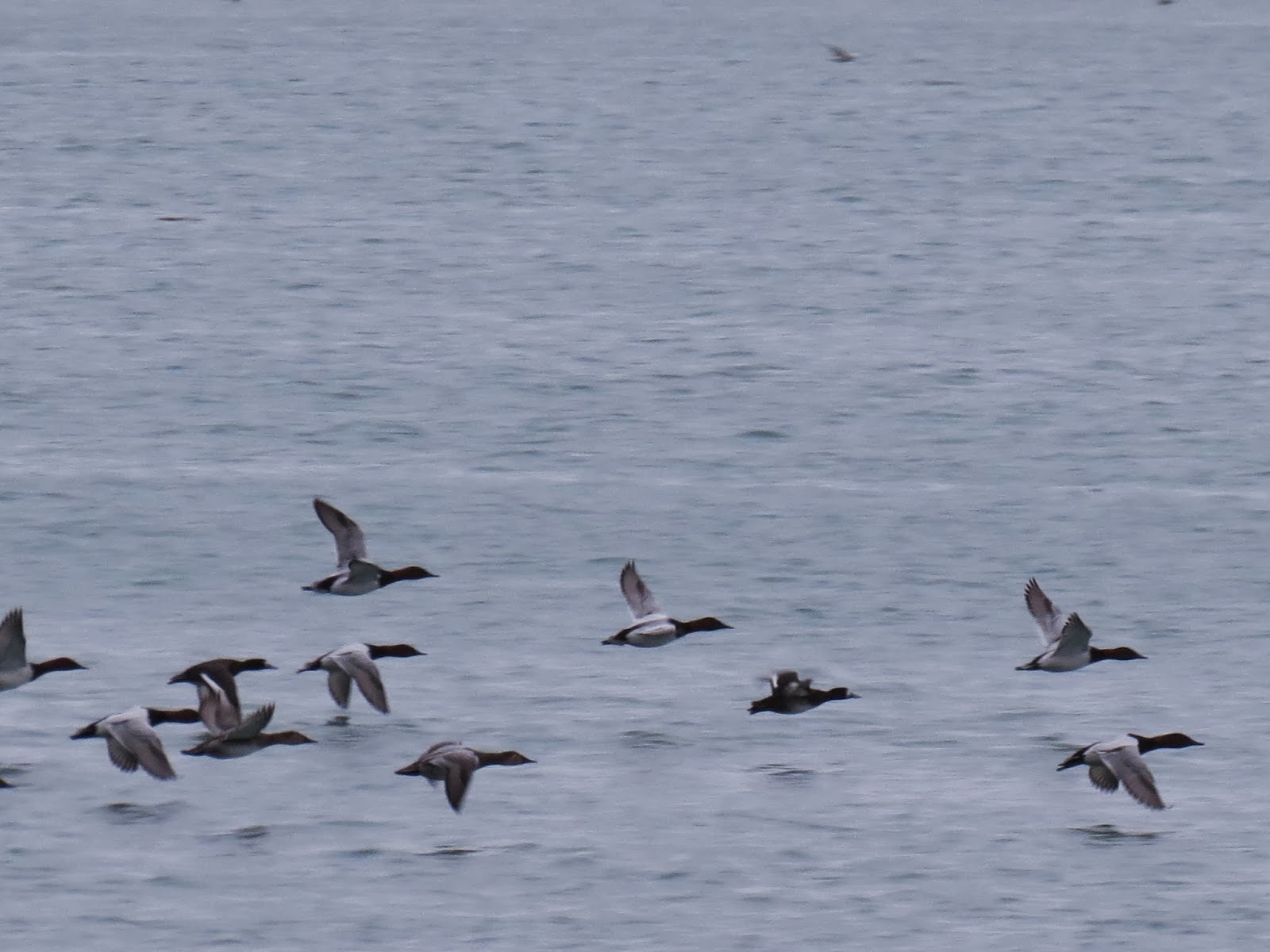 Probably my favourite duck, Canvasback on the upper Niagara River (with Greater Scaup) 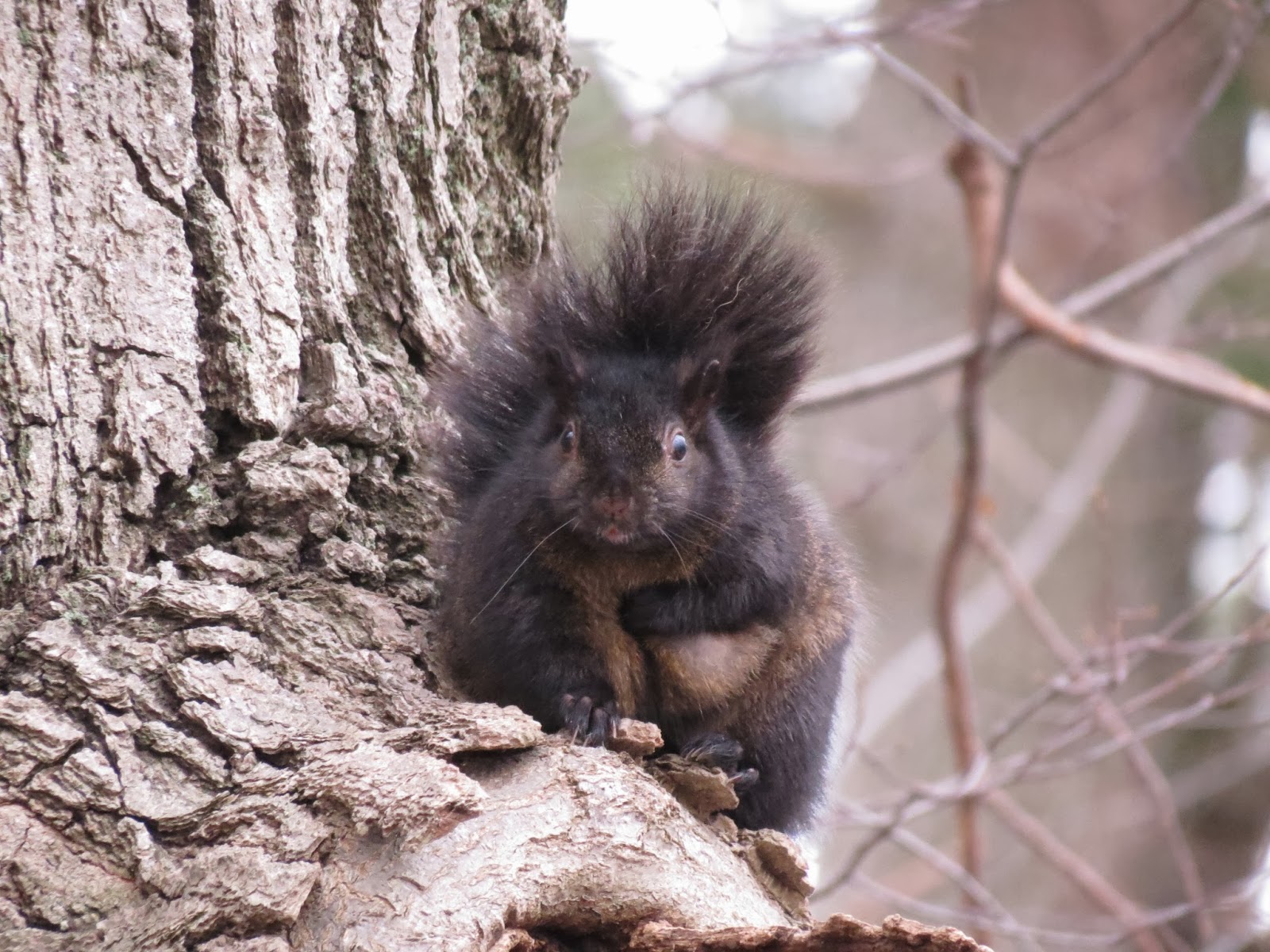 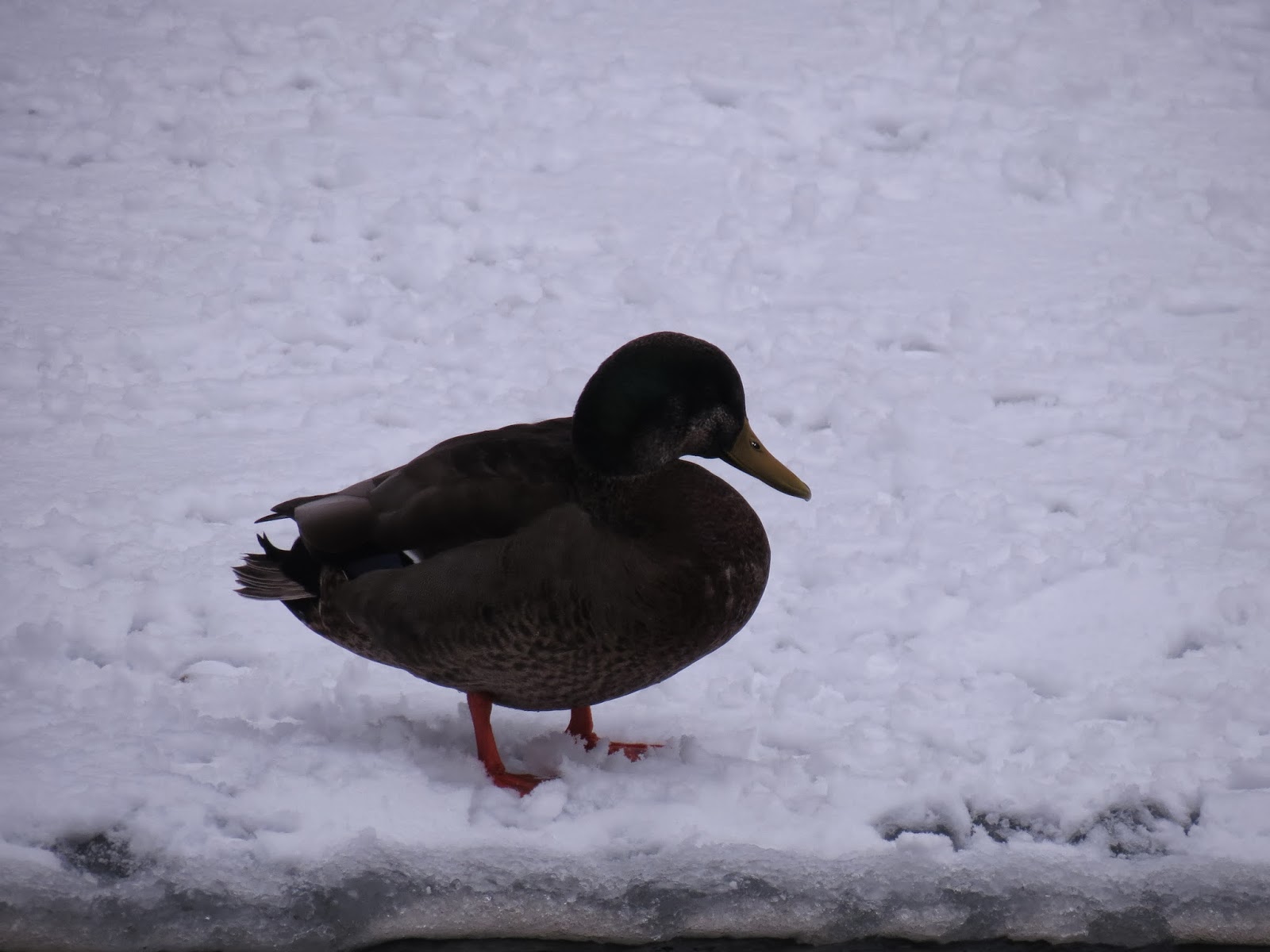 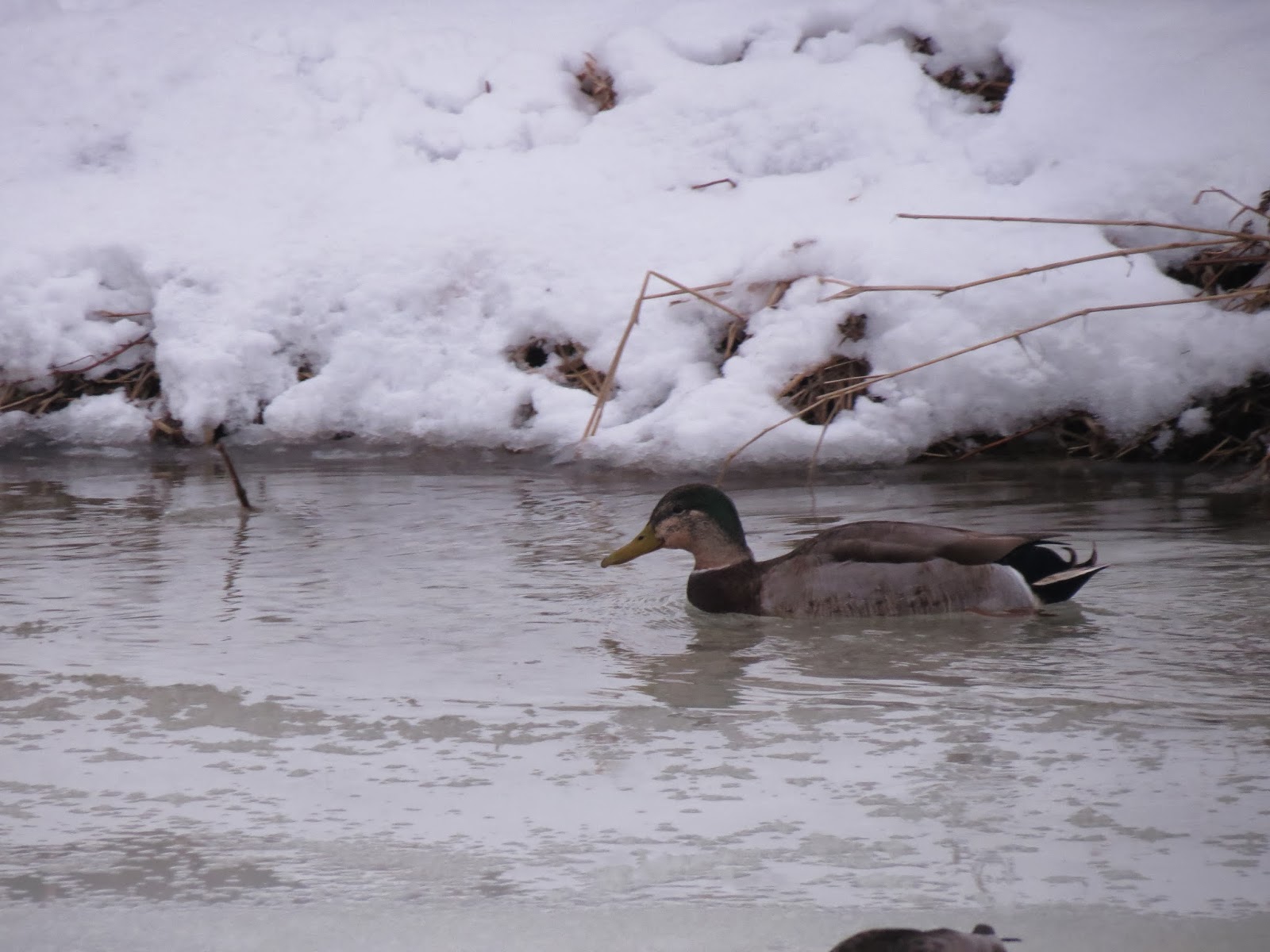 These two ducks are wintering in the same Mallard flock in Mississauga. The first is obviously an American Black Duck x Mallard hybrid, but the second doesn't seem to show any Black Duck features, and I'm wondering whether it is an "intersex" mallard (an older female that is developing male plumage features). Any input would be welcome, I'm planning to do a bit more research into this at some point.
Posted by Reuven Martin at 4:58 PM 1 comment:

End of year ducks and things

King Eiders have become a regular fixture among the masses of diving ducks (primarily Greater Scaup, Long-tailed Duck, Common Goldeneye and White-winged Scoter) attracted to the west end of Lake Ontario by zebra mussels. Still, they are a rare bird to see unless you're actively twitching one, so I was rather shocked when this female swam out from practically under my feet with a flock of Greater Scaup towards the end of December. 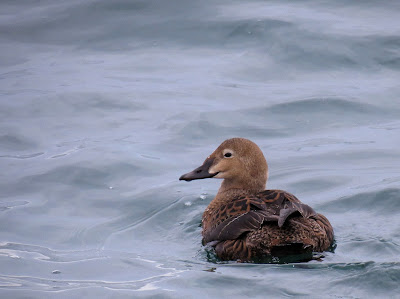 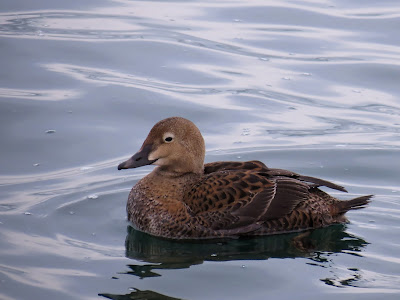 It turns out the ducks were diving down and prying masses of zebra mussels off the concrete wall below me, allowing for some excellent extended views. What is presumably the same bird has been seen here (Port Credit, Mississauga) very sporadically for a few weeks this December.

This Eider was not the first rare duck I saw that day. A male Harlequin Duck has been present all winter near Colonel Samuel Smith Park in Etobicoke, and shortly after sunrise I spotted him flying in with several Bufflehead. The ducks landed in a bay very close to shore, and I was able to get some very good views of this spectacular bird, although the early morning light didn't allow for great photos. 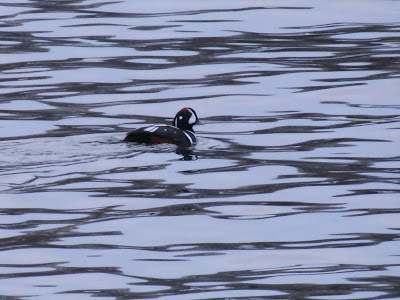 A first-winter male Harlequin Duck was present in exactly the same location this spring, and it seems likely that this is the same bird after having acquired his adult finery somewhere in Labrador or Northern Quebec.

This second-winter Kumlien's Gull was nearby. This is the best view I've had of this plumage, which is encountered less frequently than either adult or first-winter birds, but more commonly than third-winter birds. 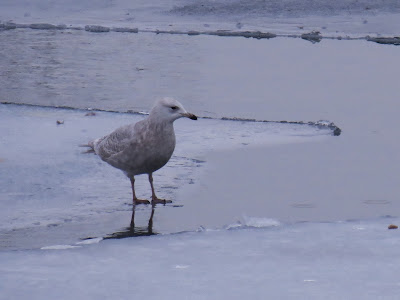 One of my later stops that day was at a wastewater treatment plant in Oakville, which has been hosting several Yellow-rumped Warblers this winter. I noticed this Belted Kingfisher trying to hunt in the treatment cells - certainly not a good place to find fish! 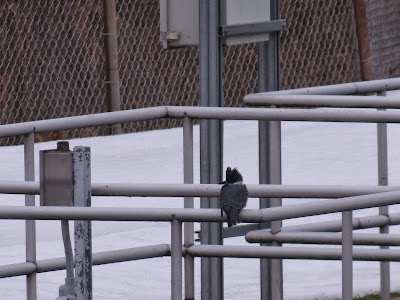 Luckily it flew off back towards the lake as I walked around the area.
Posted by Reuven Martin at 5:33 PM 1 comment:

5: While watching songbirds in a reverse migration off Fish Point, Pelee Island in May, noticing a yellow-bellied kingbird in a flock of Eastern Kingbirds. Amazingly, as most the birds were turning back, we saw the bird again a few minutes later and were able to confirm that it was a Western Kingbird. 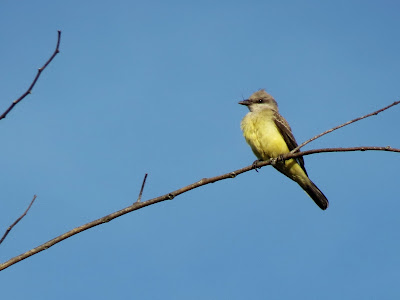 A different Western Kingbird from Hamilton in September

4: Watching and listening to thousands of cranes, swan, geese and ducks flying into Big Creek marsh for the night against the setting sun.

3: After a wet and buggy tramp through dense woods and over boggy meadows, coming out to a clearing to see the Great Gray Owl we'd been seeking sitting serenely in plain sight. Birds really don't come any better than this! 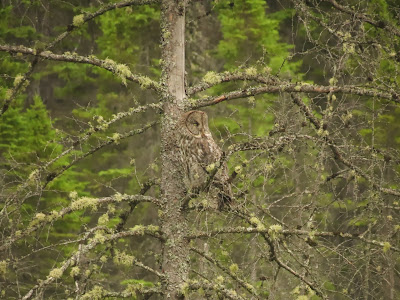 2: Heading out one evening in August in the hope of seeing wolves at a location where they've been somewhat regular, and having our expectations far surpassed, as we watched one wolf howl from about 50 metres away, with the rest of the pack joining in no more than two or three times that distance beyond.

1: Standing in a clearing at Rondeau in for an hour one beautiful May evening. Against a background of Spring Peepers and Wood Thrush, I watched a male Hooded Warbler being uncharacteristically showy and an Eastern Red Bat foraging overhead in the fading light. As night fell, woodcocks began displaying overhead and a whip-poor-will serenaded me from the woods nearby as White-throated Sparrows began to pass through the treetops ahead of a perfect night for migration.
Posted by Reuven Martin at 12:35 PM No comments: