The obsession of many of Algonquin Park’s current generation of naturalists is odes (dragonflies and damselflies for the uninitiated). In particular, the lifetime species lists for Algonquin Park have become very competitive. As I result, I was especially excited recently to come across two additions to my list, bringing it to 91 odes seen in the park. There are only about 10 more species that are not vagrants or virtually impossible to find.

Brush-tipped Emerald is an uncommon species in Algonquin, and I was happy to come across four over a day of exploring some sedgy beaver meadows. 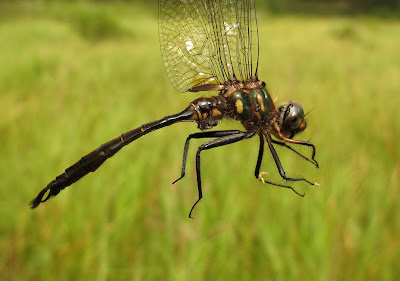 On the other hand, Widow Skimmer is an extremely rare species in Algonquin with only a single vagrant from its normal environs farther south reported in the past six years. On the 23rd we had the morning off before a program in the evening so Peter Mills and I went looking for odes. While tramping through a beaver meadow with a very northern mix of plants (Sweetgale, sedges, sundew, Black Spruce and Tamarack) we were shocked to catch a glimpse of the incongruous but unmistakeable wing pattern of a male Widow Skimmer! Unfortunately Peter’s excited swing knocked its head right off. 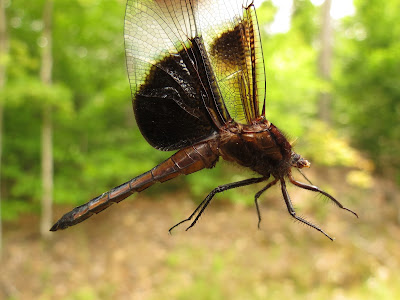 On the subject of southern species in northern landscapes, I was amazed to see this Common Buckeye in the Visitor Centre parking lot. Although this species is extremely rare in Algonquin Park, it is actually the tenth individual I’ve seen here. 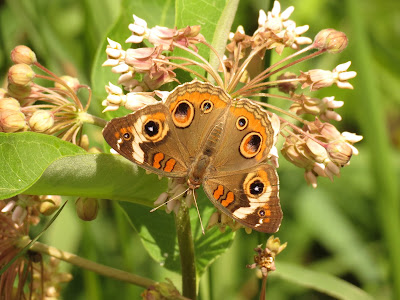 Posted by Reuven Martin at 11:16 AM No comments:

On July 18th I found a Dion Skipper in a sedge meadow - the first record of this butterfly for well-studied Algonquin Park. 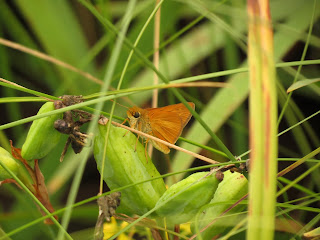 This is the second new species of butterfly I've found in Algonquin, the first being a Fiery Skipper in last years large influx. I also found a new damselfly, Fragile Forktail, in 2011. 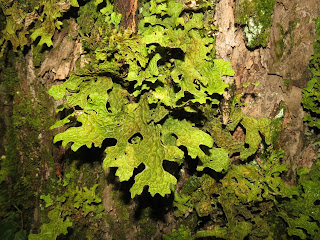 Lungwort is a distinctive lichen that turns green after rain. It is often hard to find as it is a favoured food of moose.
Posted by Reuven Martin at 12:02 PM No comments:

Summer Days and a Great Gray


There’s never a dull day this time of year and I’ve been spending lots of time outside. The absolute highlight has been this bird: 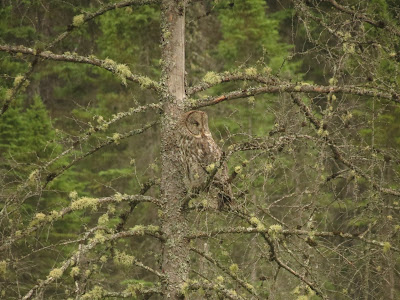 Great Gray Owls are extremely rare in Algonquin in summer, but one evening we saw this guy next the road in fading light. The next day, by using satellite maps, GPS, knowledge of Great Gray behaviour and following the calls of angry birds and after bushwhacking through bogs, dense fir forest and alder thickets we found it again! Certainly the most accomplished I’ve ever felt at finding a bird. 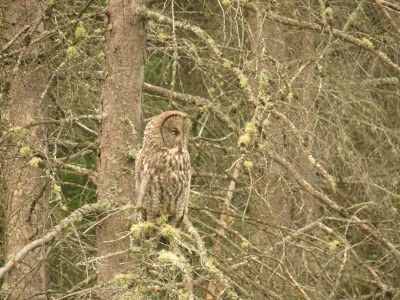 We ended up watching it for over an hour as it hunted half-heartedly (and unsuccessfully), was mobbed by Blue Jays, Yellow-bellied Sapsuckers, Common Yellowthroats, Swamp Sparrows, a Black-backed Woodpecker and an Olive-sided Flycatcher, and at one point settled down for a preen. 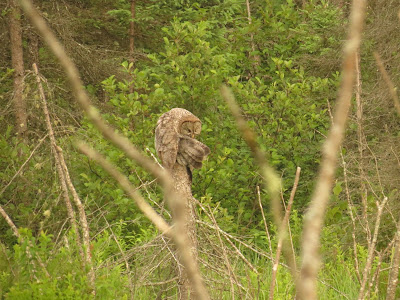 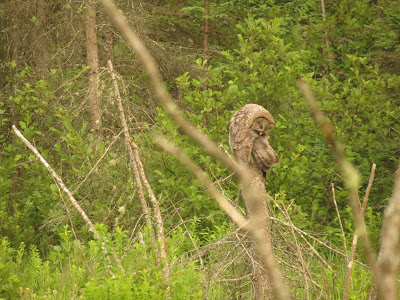 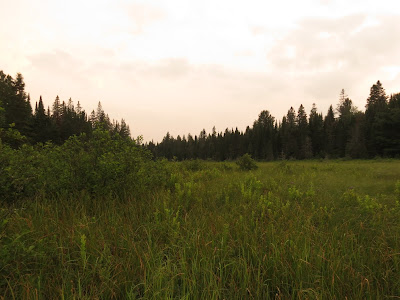 
One afternoon a deep haze and smoky smell descended on Algonquin. It turned out to be from fires all the way in Labrador. 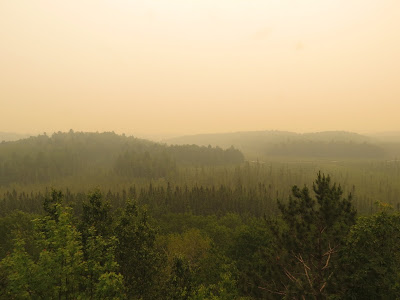 The Ontario Butterflies group has been aflutter with reports of abnormal numbers of hairstreaks in this region of Ontario. My experience has been similar with 8-10 Striped and 3 Banded Hairstreaks so far. In my past two years of admittedly poor coverage in Algonquin I’ve only seen 1 hairstreak, and one that was left unidentified at that. 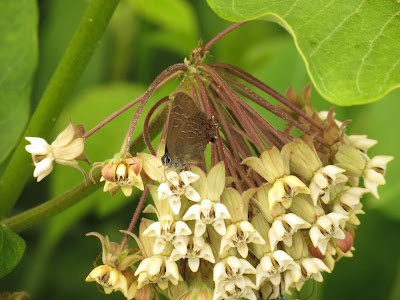 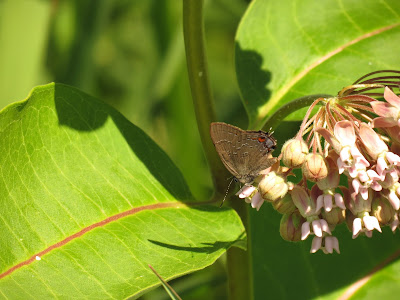 Banded Hairstreak is only subtly different from Striped

Both the hairstreak photos above were taken on milkweed, which is currently in full bloom and attracting an impressive variety of pollinators including an enormous day-active sphinx moth and many fritillaries like this Aphrodite. 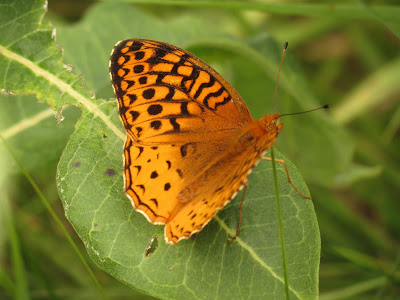 Milkweed isn't the only flower in bloom at the moment, although those most visible right now are mostly non-natives. Still, bogs in particular provide opportunities for a variety of interesting wildflowers. 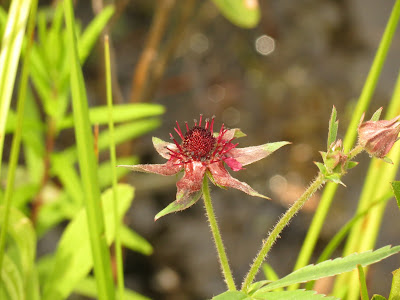 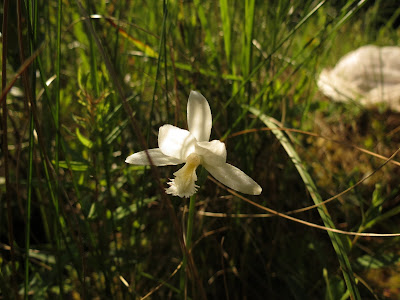 Rose Pogonia is named for its pink colour but I stumbled upon this aberrant white one.

One of the most abundant butterflies in Algonquin is Bog Copper, found exclusively in bogs where cranberries, the caterpillar’s food plant, grow. 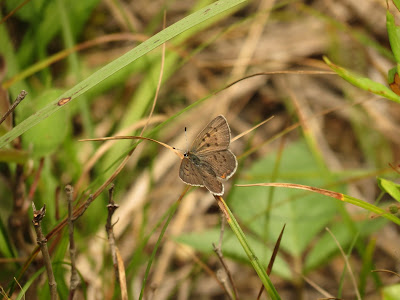 Bogs are also the home of many members of Algonquin’s most elusive and unpredictable group of dragonflies – the Somatochlora emeralds. Most sightings of these species involve a unidentified individual zipping by, never to be seen again. This year so far I’ve made the acquaintance of 4 of Algonquin’s 9 regular species. 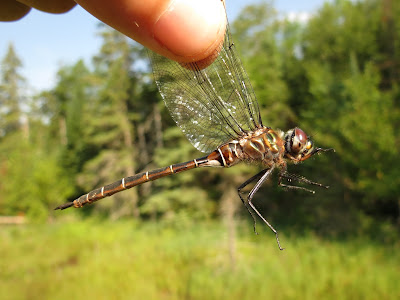 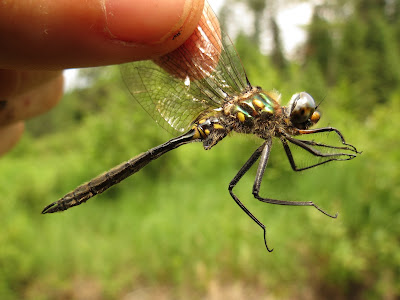 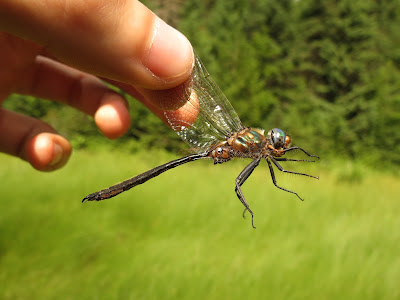 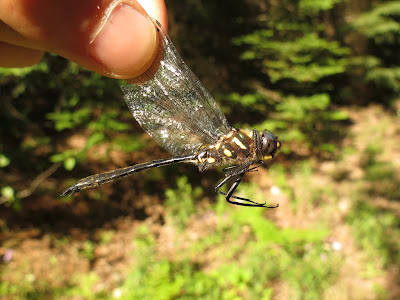 The odeing in general this year has been excellent. Two recent lifer darners have been especially welcome.

This Harlequin Darner came out of nowhere and landed right on my pants! Not a bad way to get a lifer. 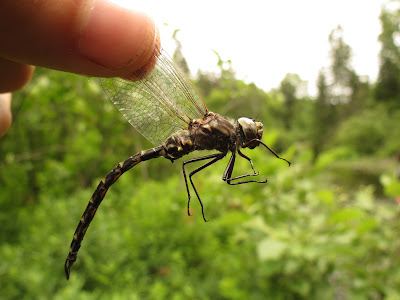 Cyrano Darner is a very widespread species but is often extremely scarce. 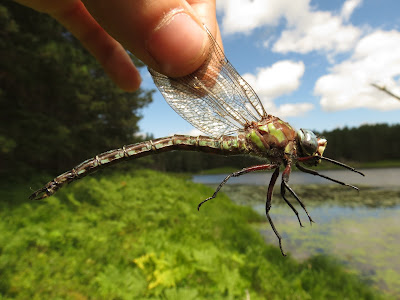 Both the above species are early-season odes now essentially done for the year, as is this Moustached Clubtail. 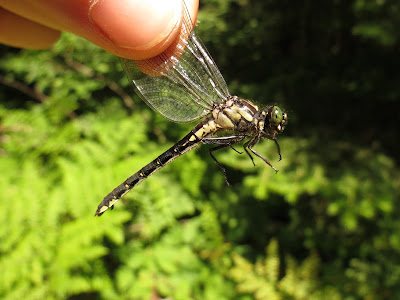 This is a species of rocky streams but I caught this female along a roadside. Backroads can be extremely productive for insects this time of year, and one of the other things I’ve come across was this Little Wood Satyr. 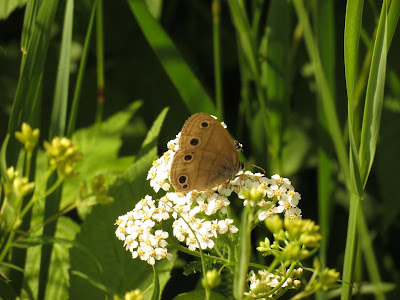 This is one of Ontario’s most abundant butterflies but I have never seen one drinking nectar before.

At one point we came across a tiny Painted Turtle and a Dragonhunter exuviae (shed larval exoskeleton) and were able to make this size comparison. 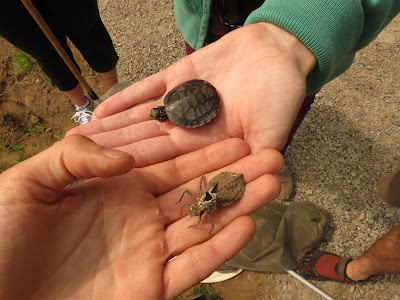 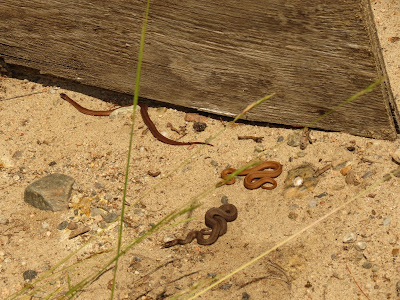 Posted by Reuven Martin at 5:59 PM No comments:

Close Encounters of the Moose Kind

On July 5, I went on a long hike along part of the highway and Mizzy Lake Trail in Algonquin Park. I’ll post some of the other awesome things I found then and on other recent outings soon, but first I want to share an exciting experience I had with a moose.

Part of Mizzy Lake Trail is on an old railway bed, and where it passes through ponds and lakes it offers possibly the best spot in the park to see wildlife. As I approached the far edge of one of the ponds, I surprised a large cow moose that had been feeding on water-shield and other aquatic plants. By backing up a bit I was able to get some awesome video as the moose fed. She seemed completely unconcerned with my presence, barely looking at me and with no concerning body language, at least not that I could notice.

After about 15 minutes, during which time a couple other people stopped by to watch her feed, I wanted to move on so walked back to where I’d left my backpack and insect net. When I got there I heard the sound of the moose coming out of the water, so turned around to get a video of it crossing the road.


At the end of this video I, not surprisingly, turned off the recording and started backing away. As I did so, the moose followed, and then sped up to a steady trot towards me. At this point I took off in the other direction as fast as I could, wishing I had kept in better shape! The moose continued to follow me down the railway bed for about 200 metres, while I ditched everything I had on the side of the trail and continued several hundred metres further. Here, with adrenaline flowing and heart pounding, I waited for about twenty minutes before returning to find the moose gone.

I have never heard of a similar experience away from the mating season (nobody has ever been killed by a moose in Algonquin besides road accidents) and am not entirely sure what the explanation is. I’ve come up with a couple possibilities:
If you have a better explanation, let me know. Regardless of the reason, a scary experience at the time but a great story afterwards!
Posted by Reuven Martin at 11:53 AM 3 comments: