The genus Somatochlora contains numerous species of medium to large dragonflies, including 16 known from Ontario. Even in appropriate habitat, these dragonflies rarely or never seem to be common, perhaps as they only visit breeding sites briefly and spend most of their time feeding in the canopy or in small forest clearings. I have encountered 6 species of Somatochlora this summer in Algonquin Park.

Clamp-tipped Emerald is a southern species near the northern limit of its range here in Algonquin Park, and is found in rocky forest streams. I caught these two patrolling a logging road near their breeding stream. 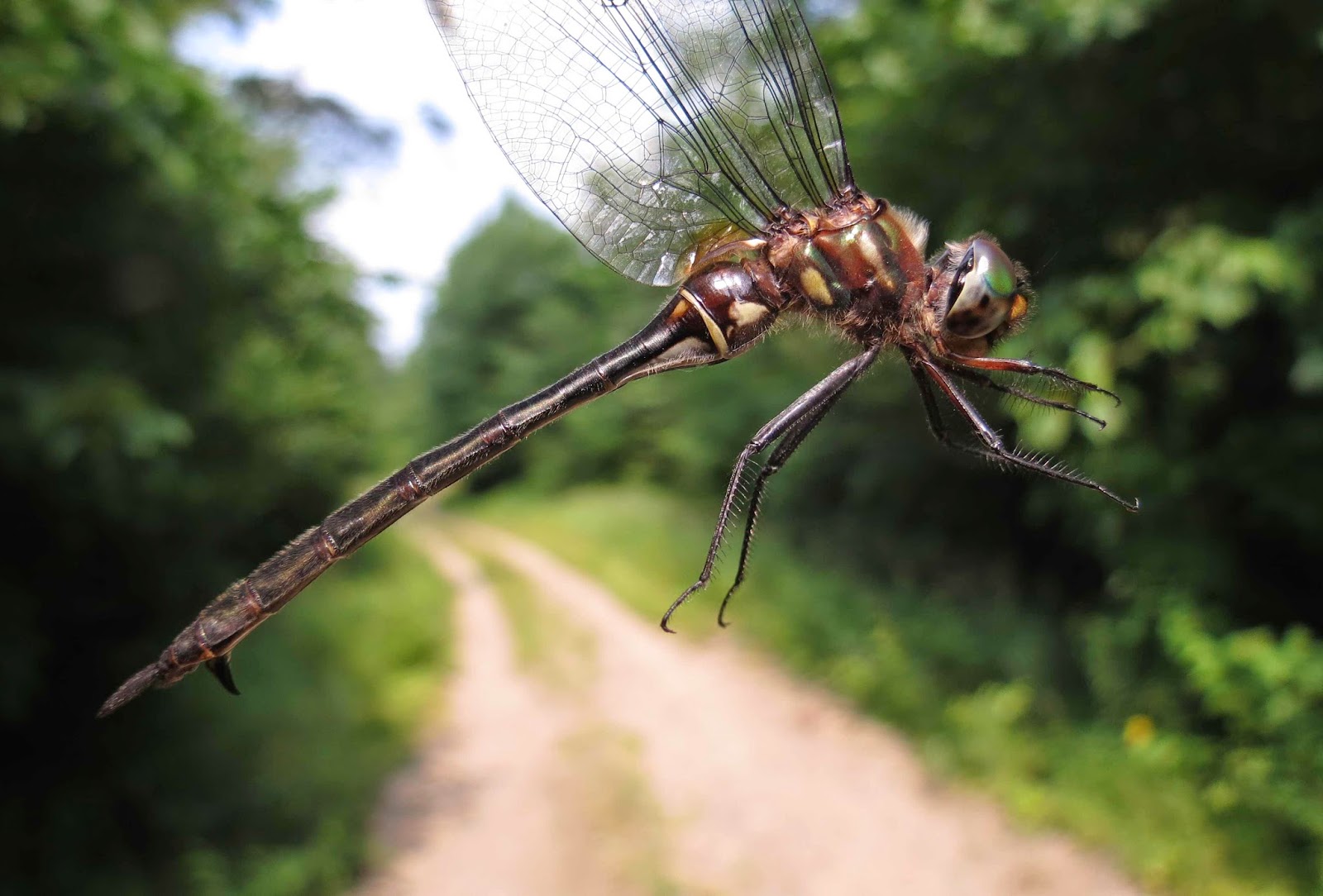 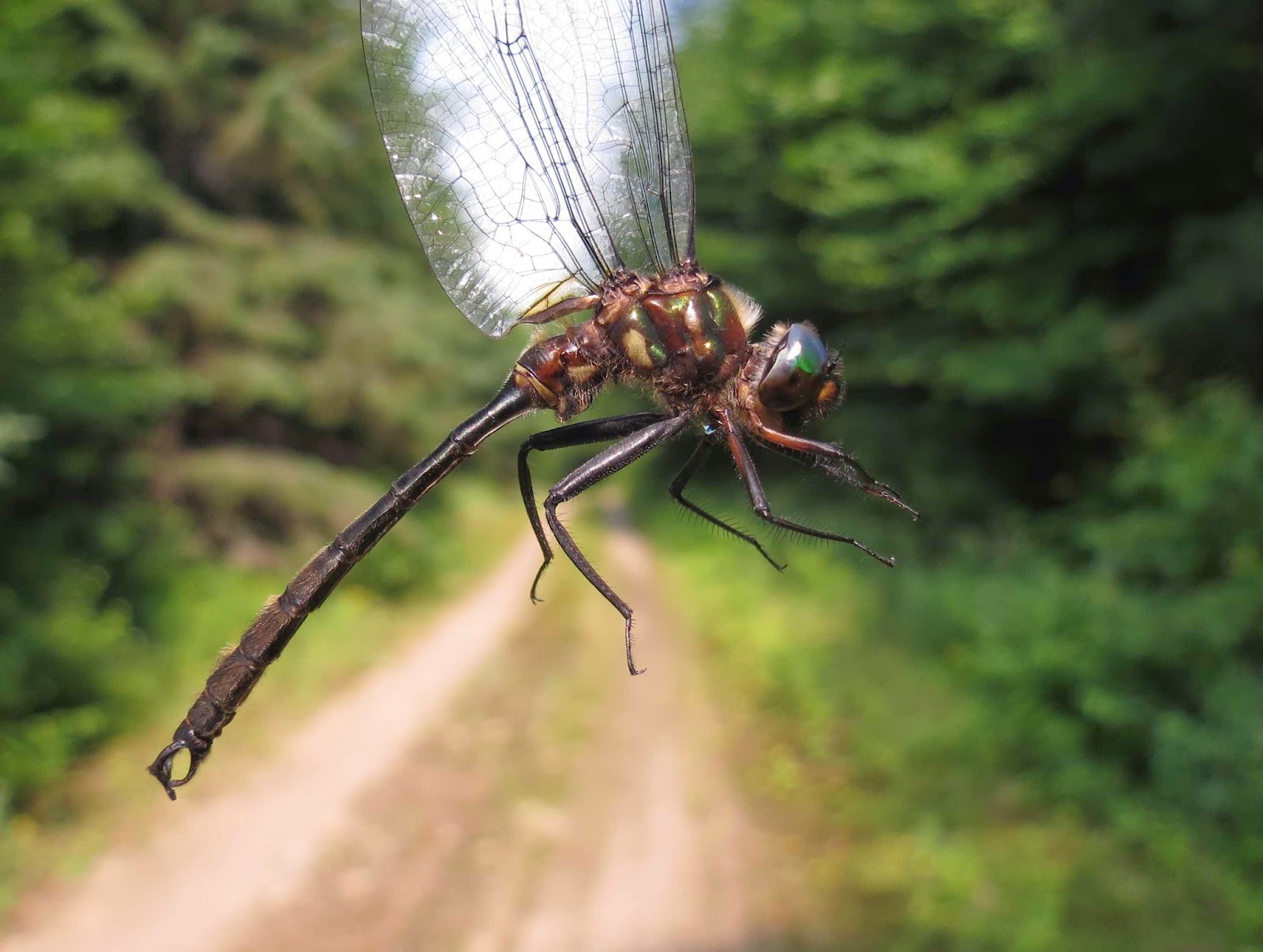 Male with his extraordinary claspers 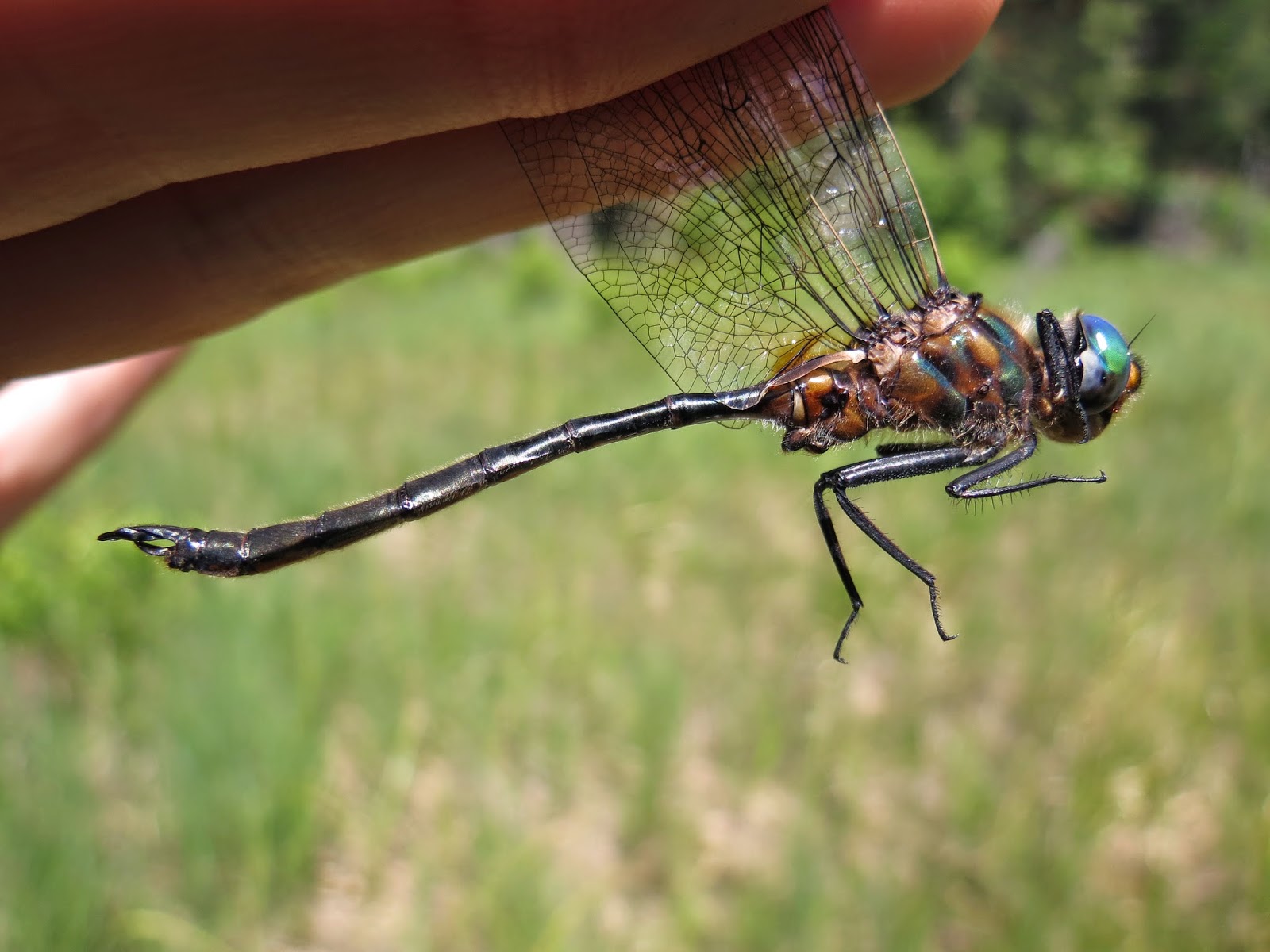 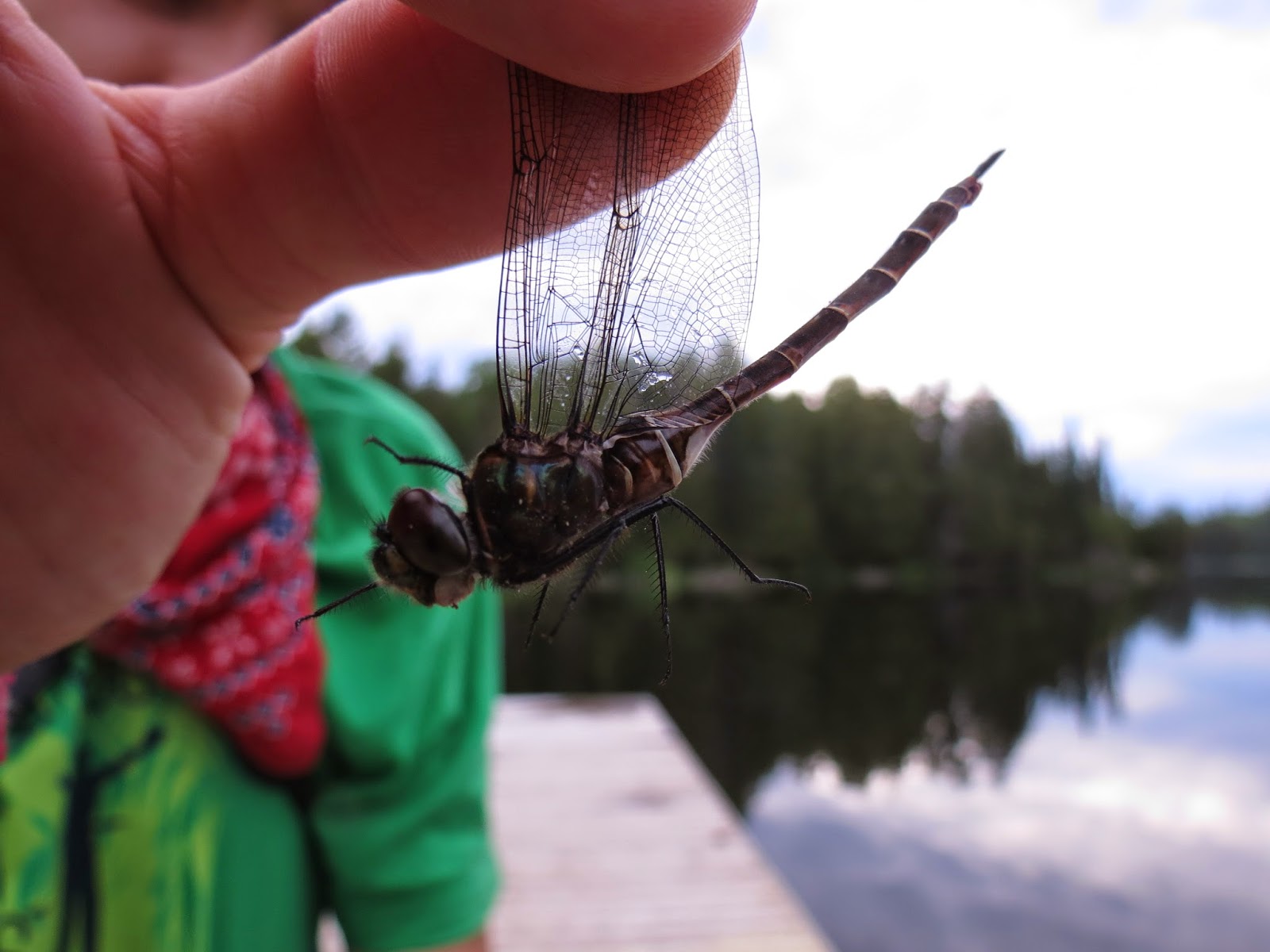 Not the best photo, but this female is one of the few individuals of this fast-flying species I've actually managed to catch this summer.

Brush-tipped Emeralds use flooded sedge meadows like Kennedy's but usually seem to be found in areas with some flowing water. This small species is easier to catch than most Somatochlora. 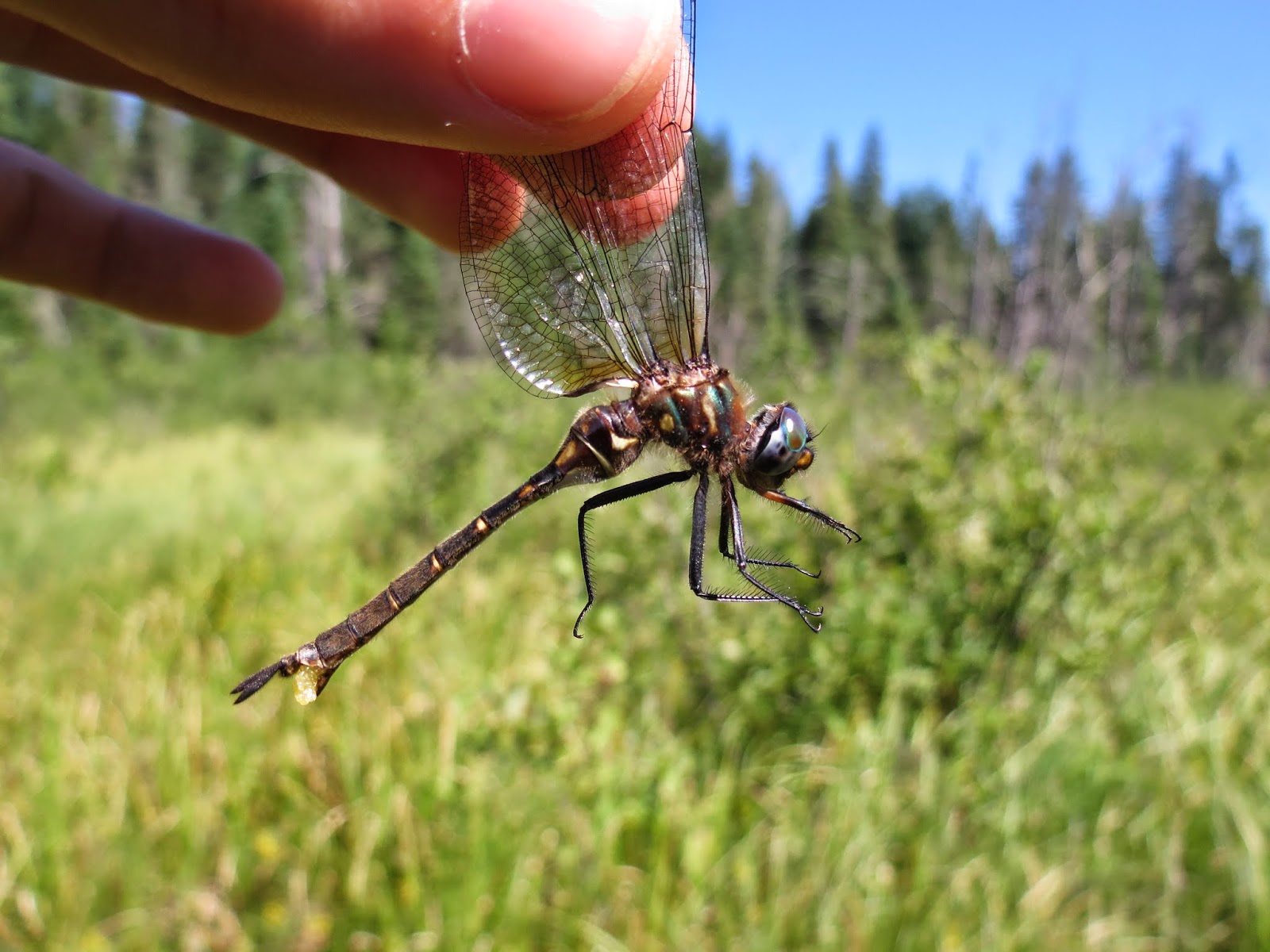 This female was not hard to catch, as she was catching the deer flies buzzing around my head! 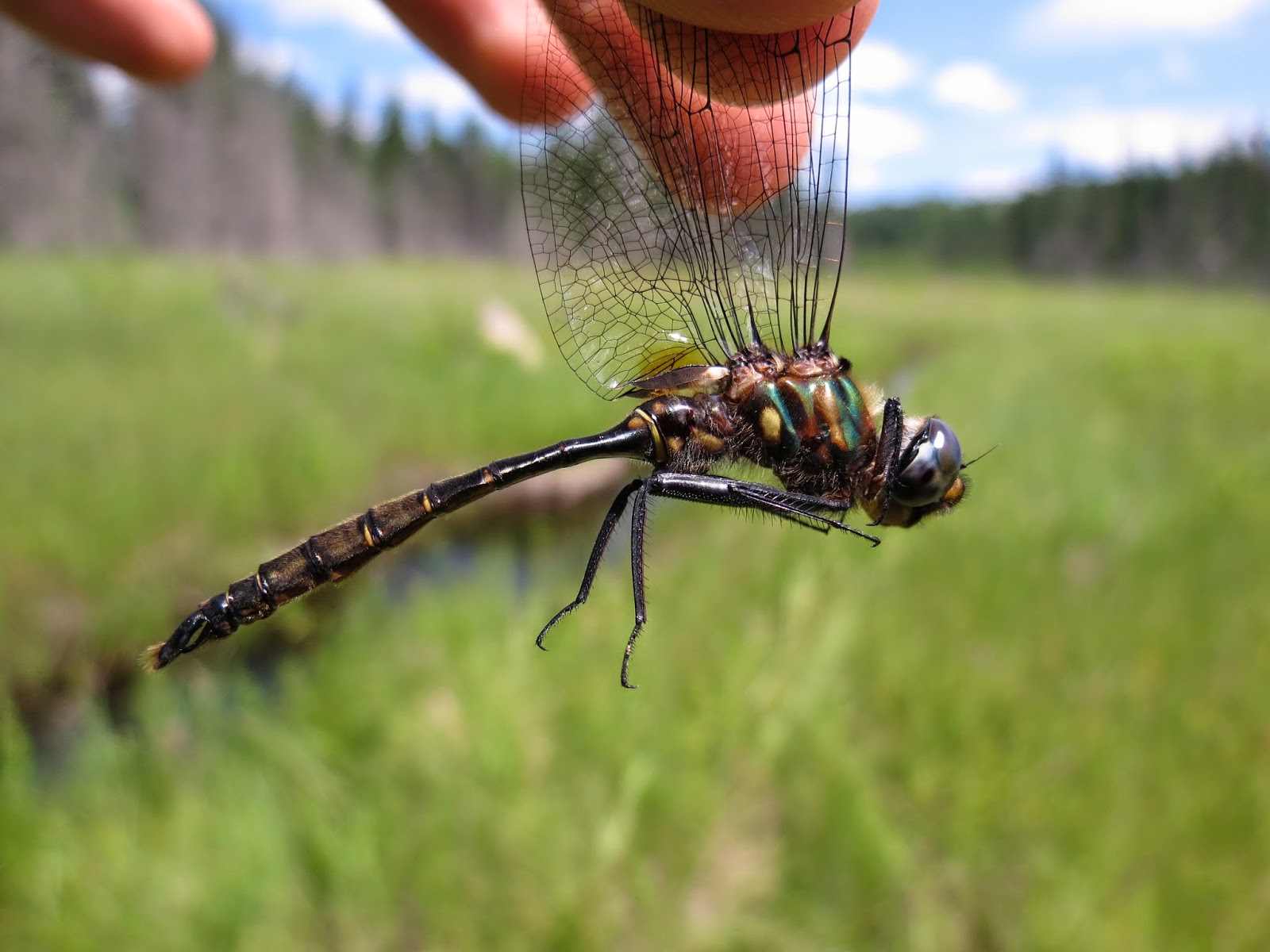 Male - you can see where the name Brush-tipped originates by looking at the claspers on the tip of the abdomen.

Occelated Emerald seem to be restricted, at least locally, to fairly rapid streams with steep dirt banks and little to no floating or emergent vegetation. They have been described in the literature as being found in shady forest streams but I have often found them along streams in sunny beaver meadows. 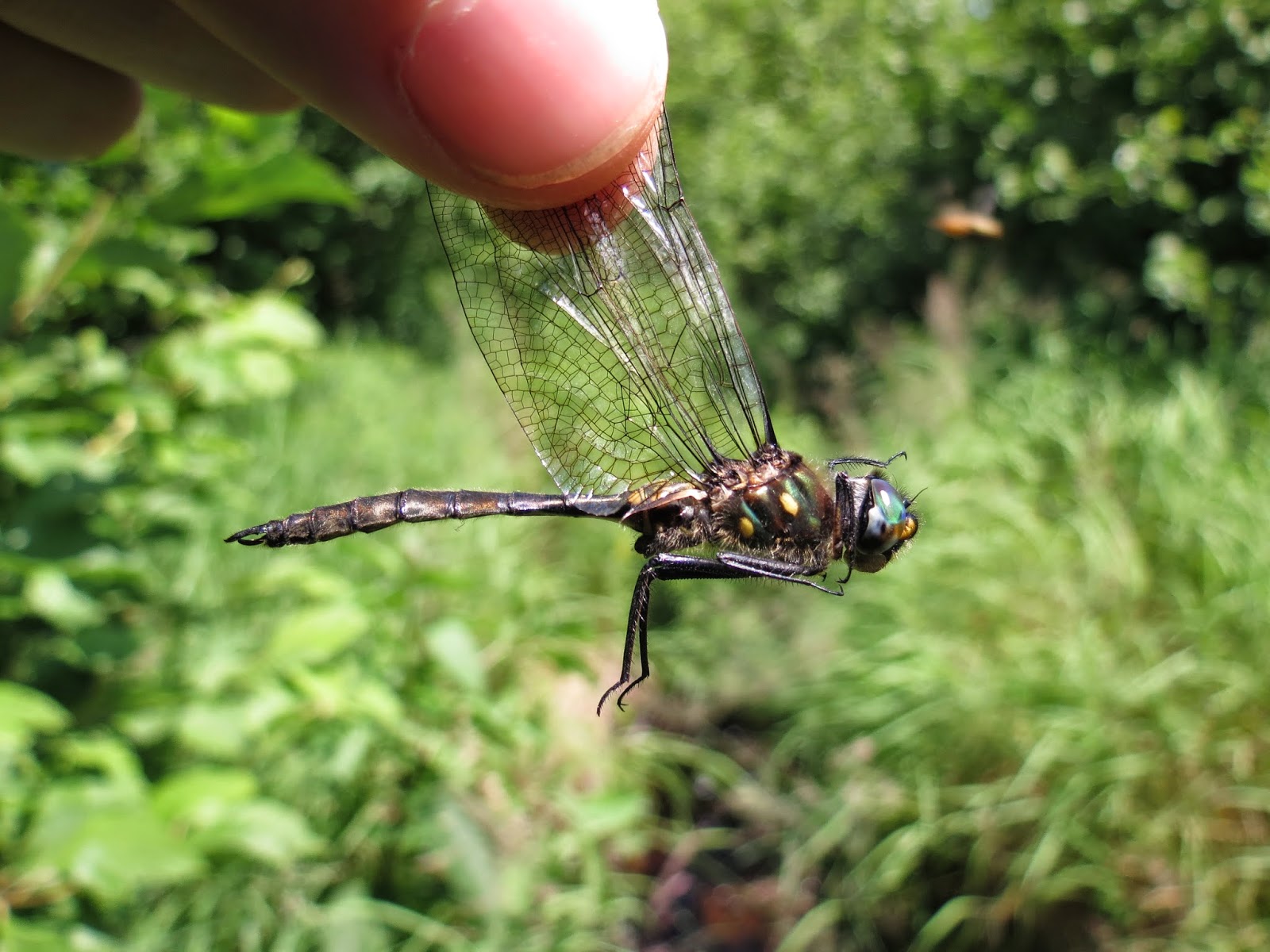 Williamson's Emerald seems to be much less specialised than the other members of their genus, but still are very uncommon. 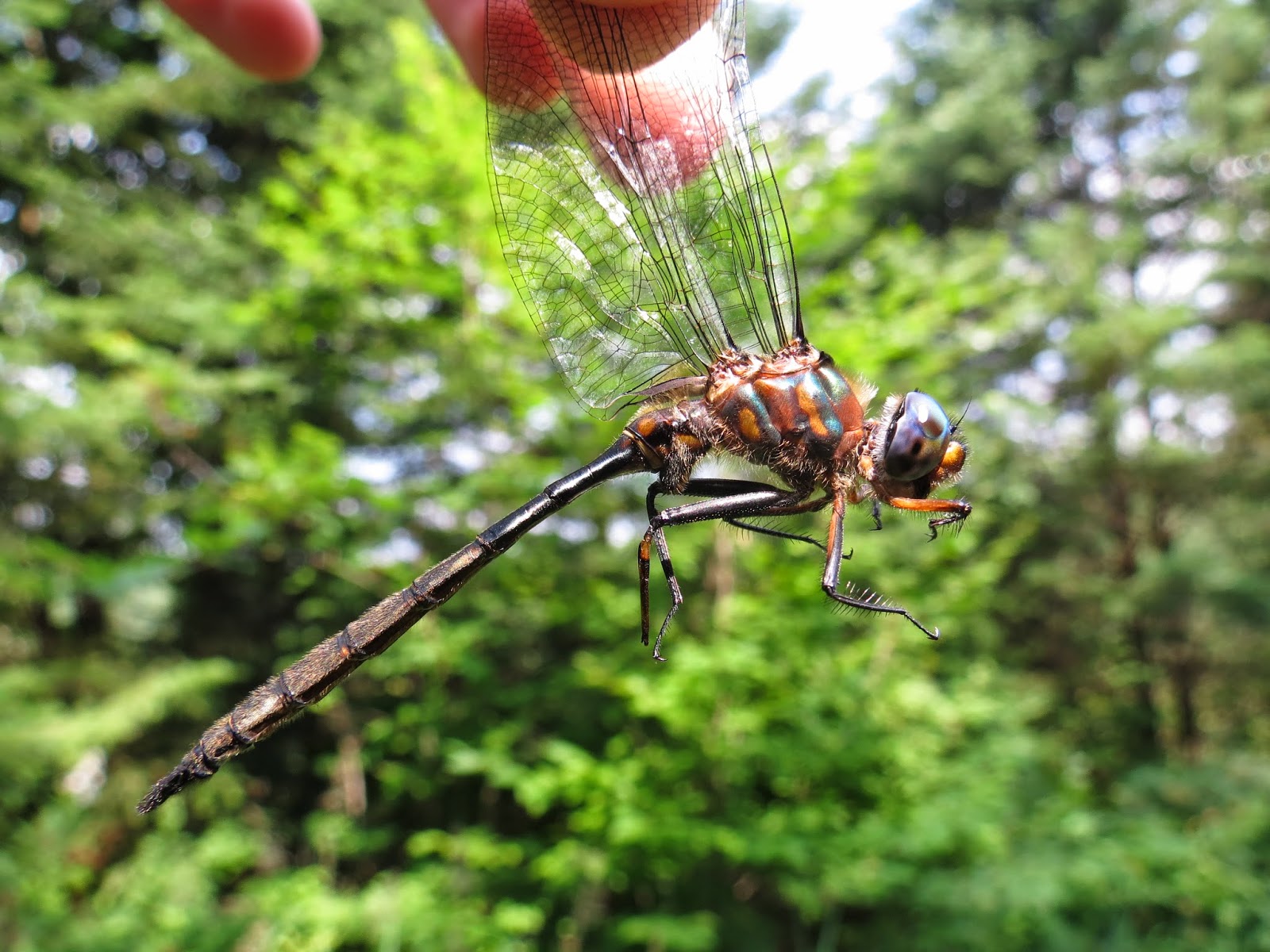 Male
Posted by Reuven Martin at 4:20 PM No comments:

I've been spending a bit more time focusing on butterflies instead of odes recently, and have had some success. Here's a few recent shots: 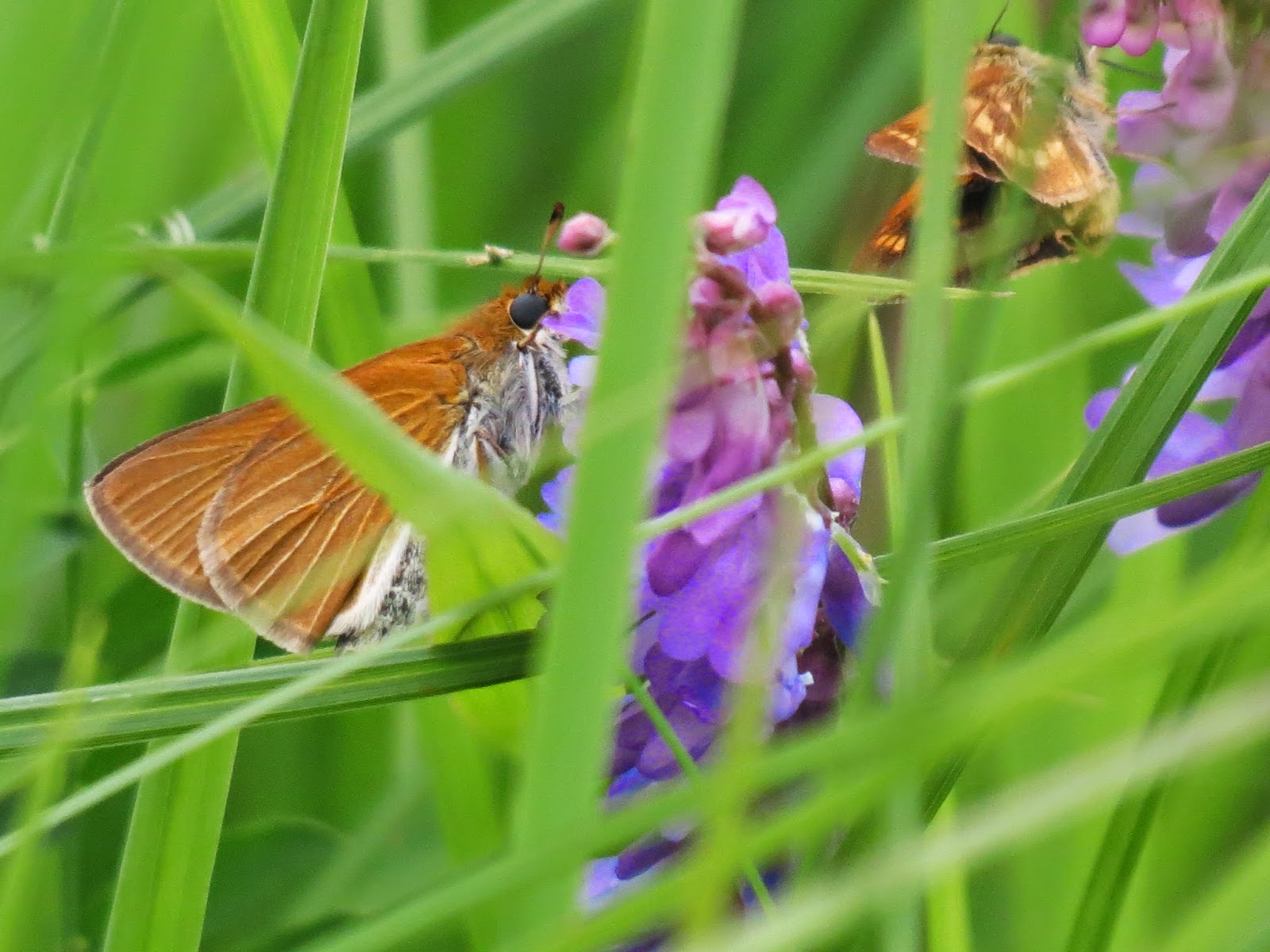 Two-spotted Skippers (left) are uncommon in Algonquin, but can be reasonable easy to find in sedge meadows. Long Dash Skippers (right) are very abundant in wet areas, although numbers are starting to decline in the last week. 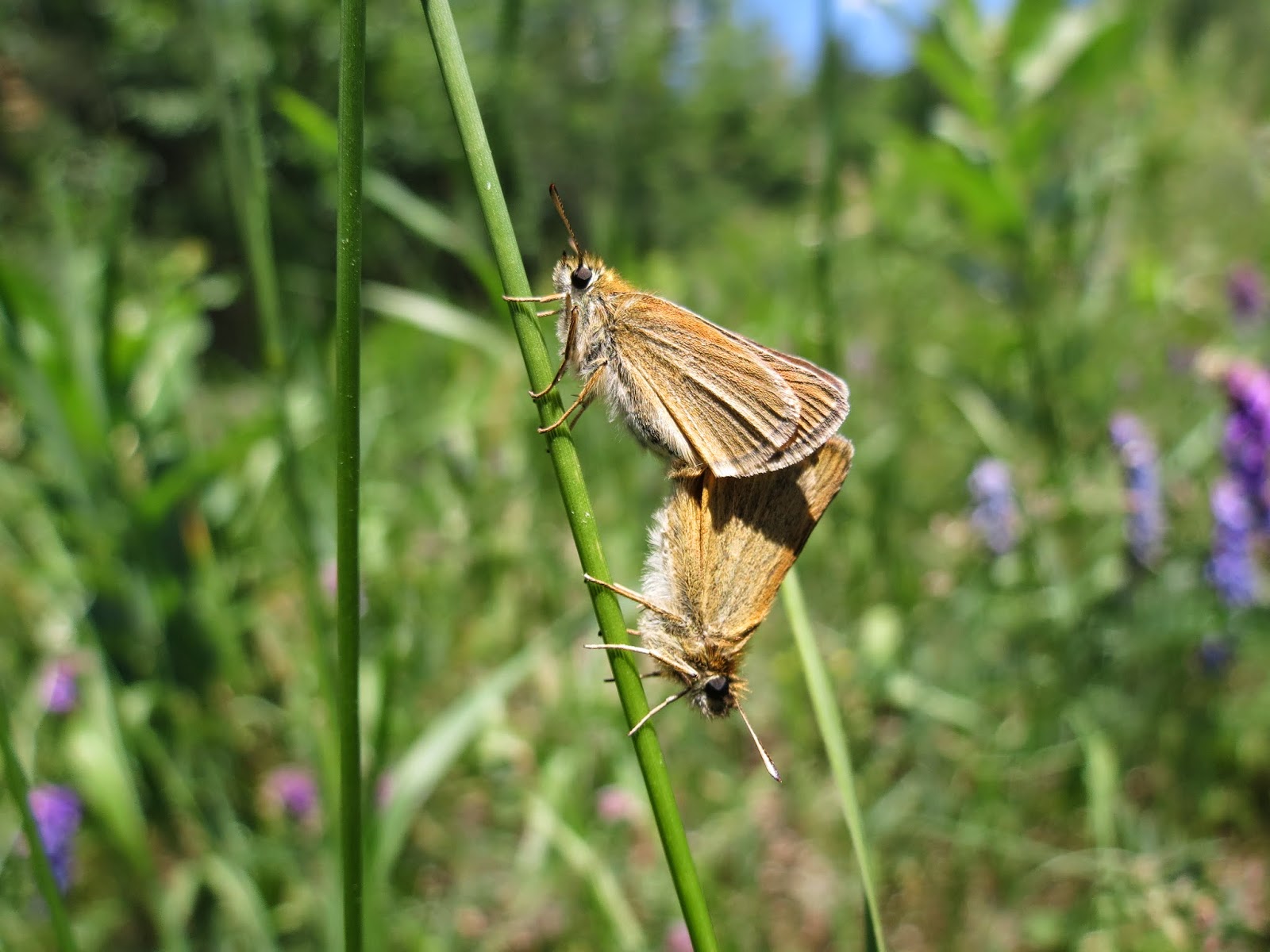 Accidentally introduced to London, Ontario in the early 1900s, European Skipper is now extraordinarily abundant in the province. 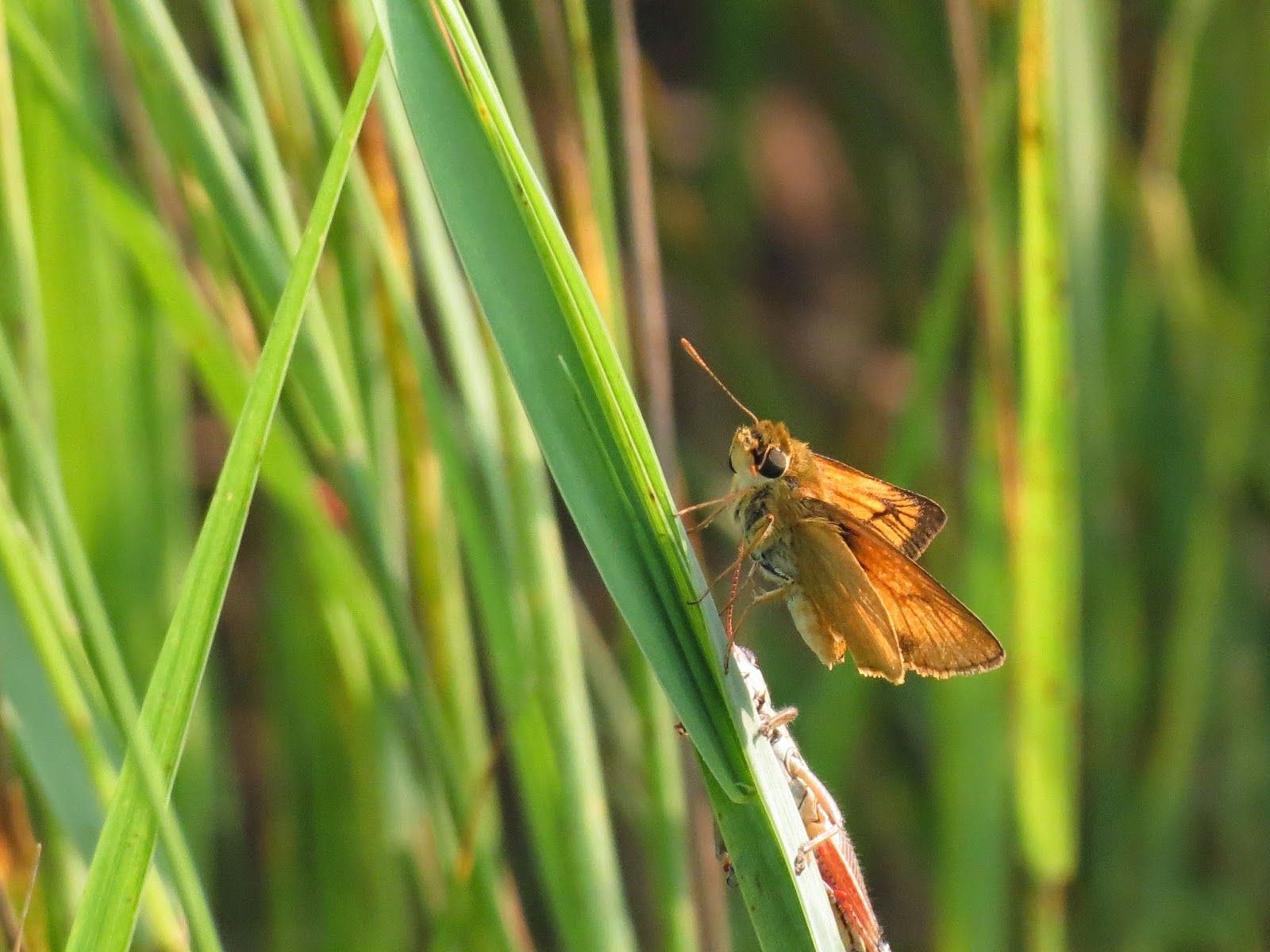 Delaware Skipper has always been considered very rare in Algonquin Park, but a recent visit to an area near the southeast corner of the park revealed them to be reasonably common. They may have been overlooked, or like other southern species they may be increasing at our latitude. 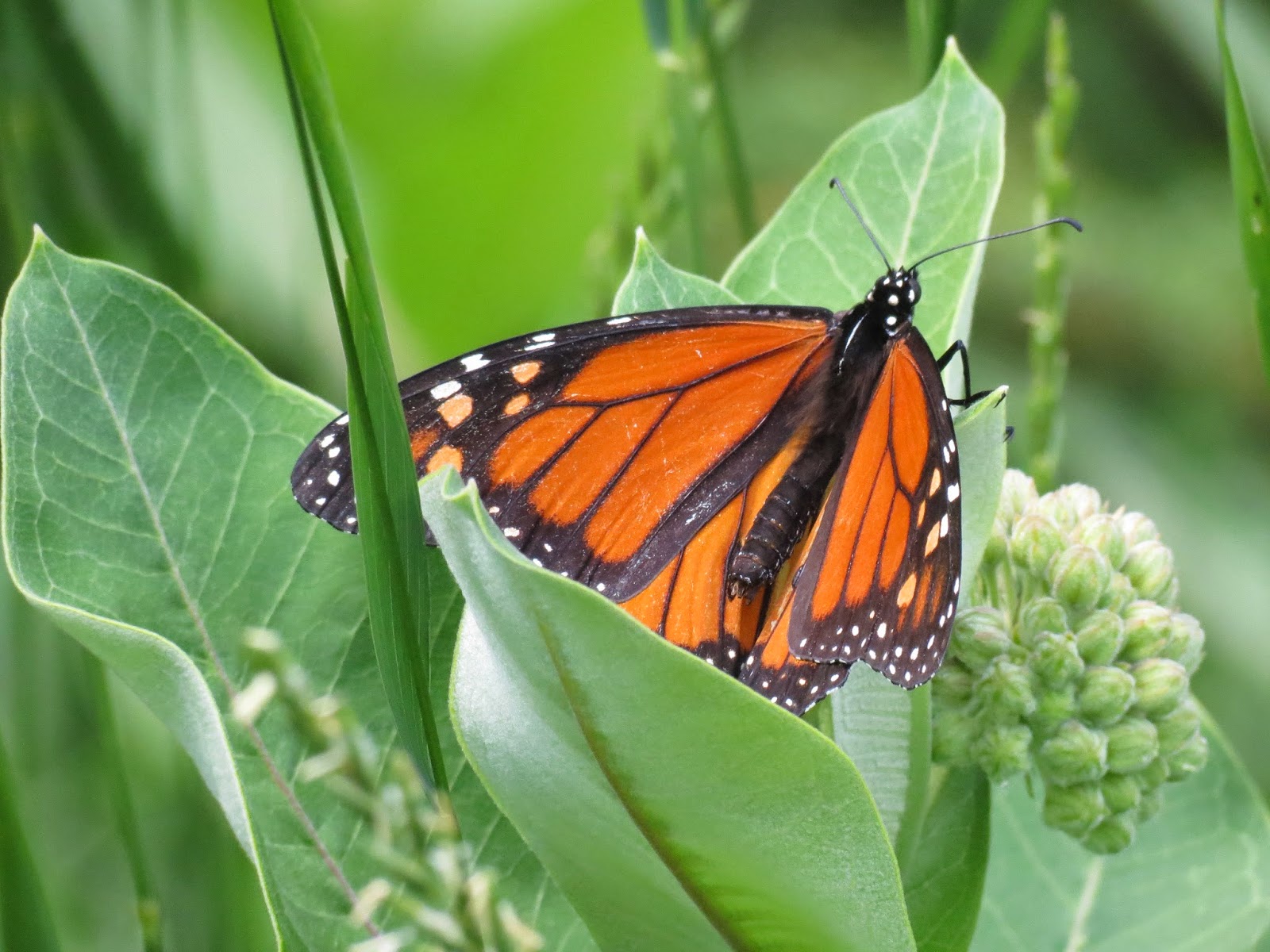 After being very rare last year, it is somewhat reassuring that Monarchs seem once again to be reasonably common in the park this year. 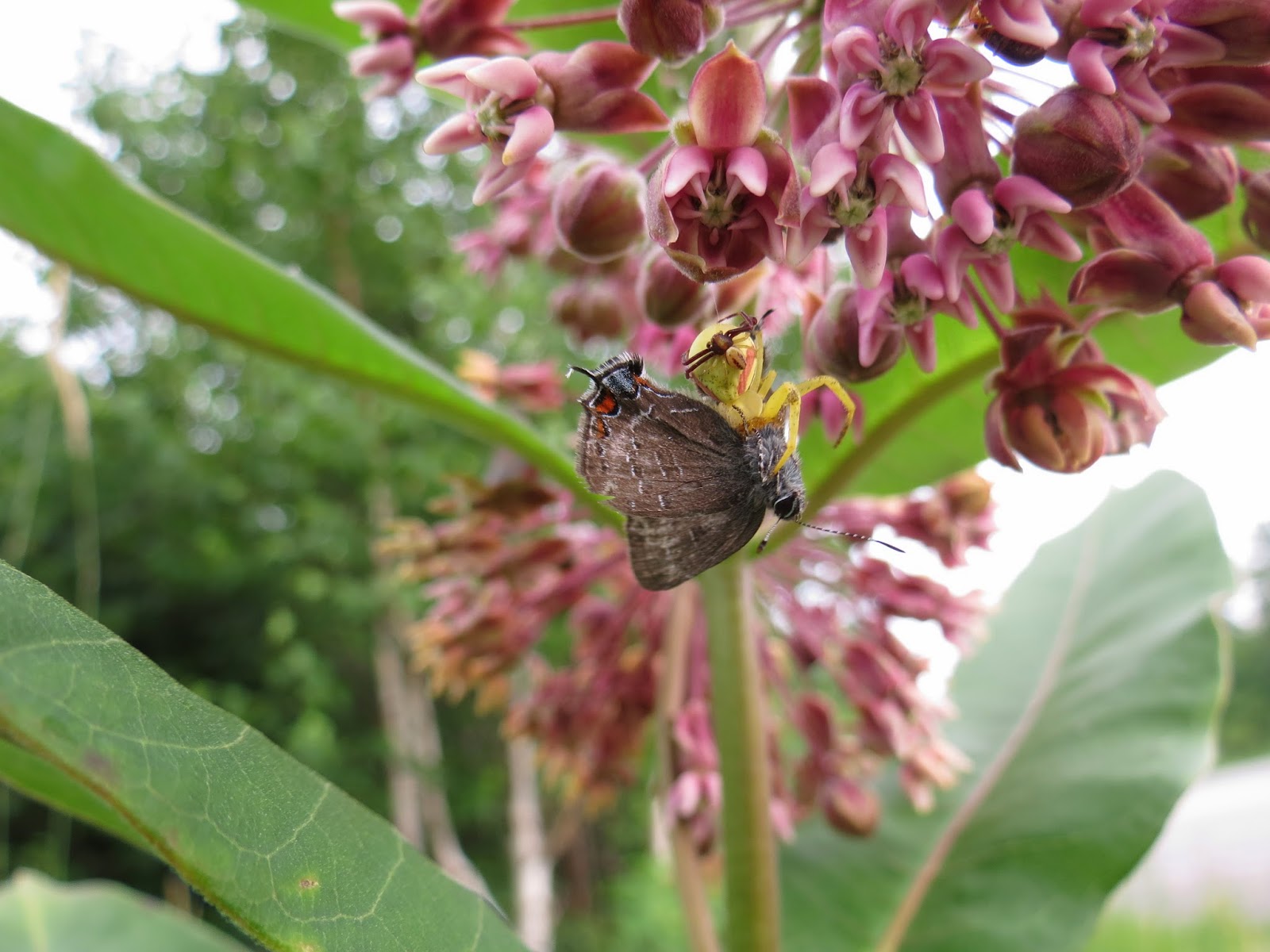 I have been seeing Banded Hairstreaks quite regularly around the Visitor Centre, but there is one less now that this crab spider has had it's way! Note the tiny male riding around on the larger female.

Posted by Reuven Martin at 5:11 PM No comments:

On June 22, 2014, I was walking down a dirt road in Algonquin Park when I noticed the agitated chips of Black-throated Blue Warblers just off the trail. I walked up and the female came right out towards me, while the male continued chipping farther back in the bush. 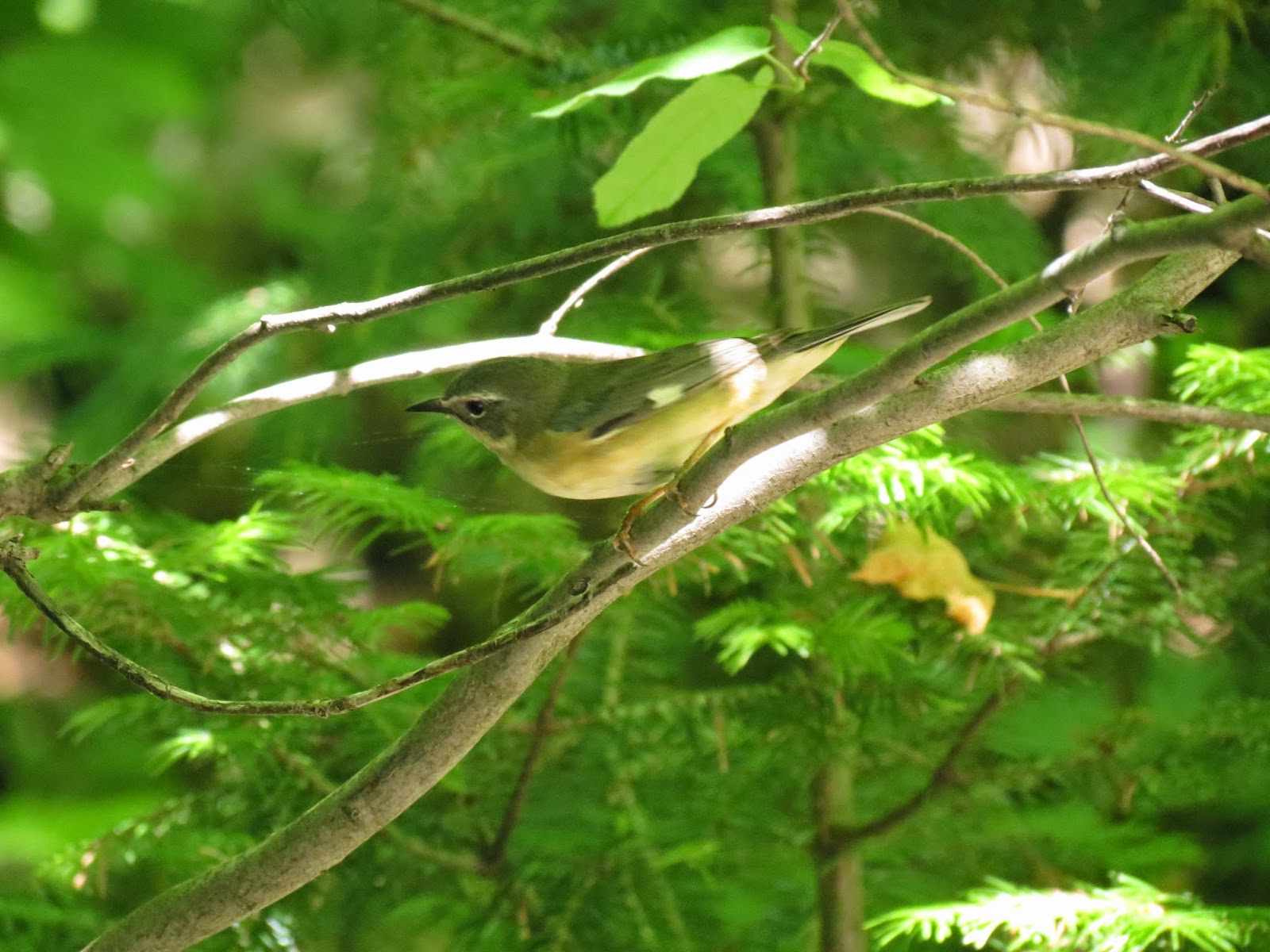 I knew there must be a nest nearby, and sure enough I quickly found one low in a young Hemlock. I also quickly noticed though that a large Eastern Garter Snake was draped over the branches just above the nest! 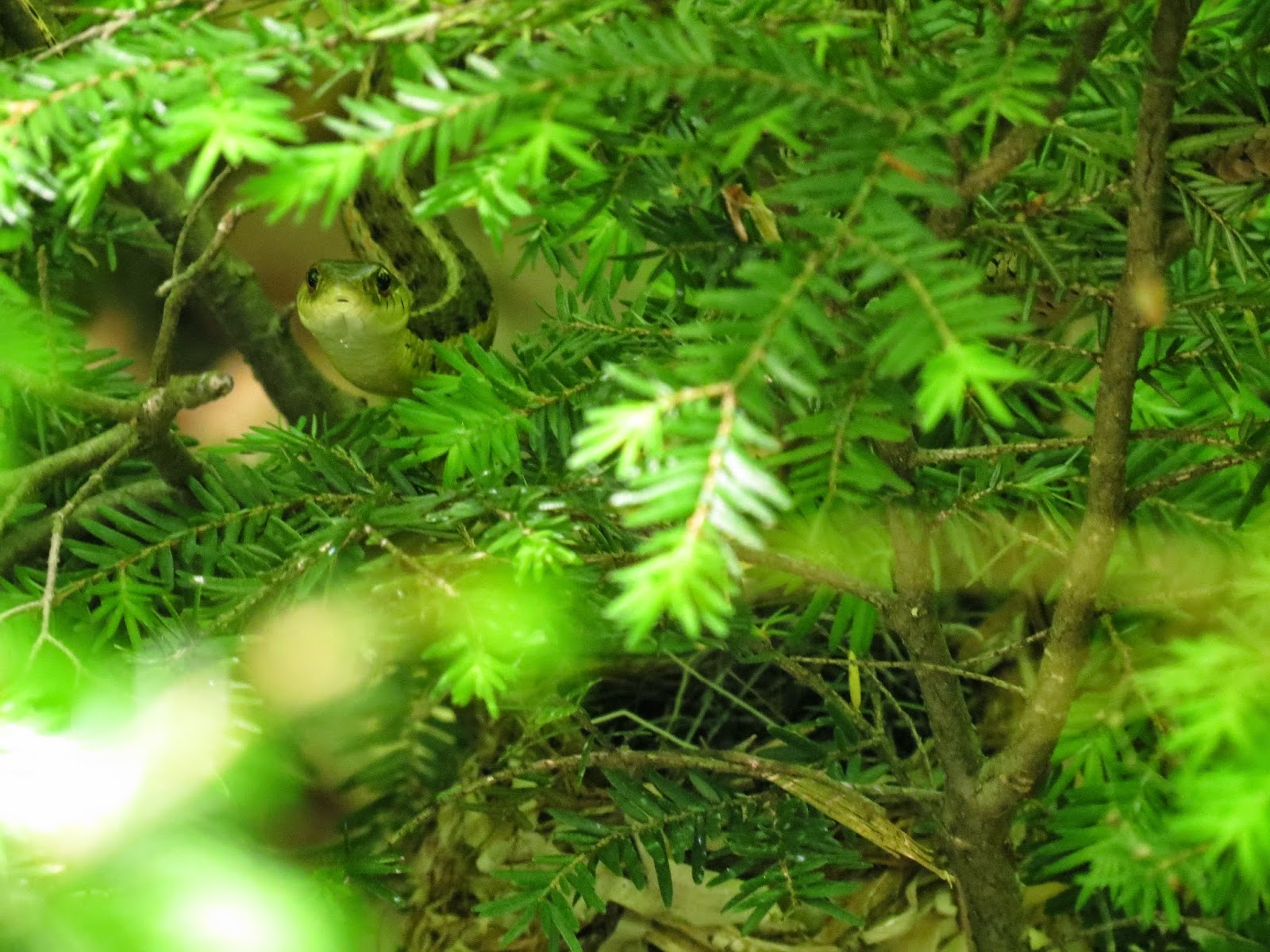 After watching for a while with nothing happening except the continued agitated chipping of the adult warblers, I moved closer and caught the snake. I couldn't feel any lumps of eggs or nestlings in its body, but given the large size of the snake this was not too surprising. The nest was empty: 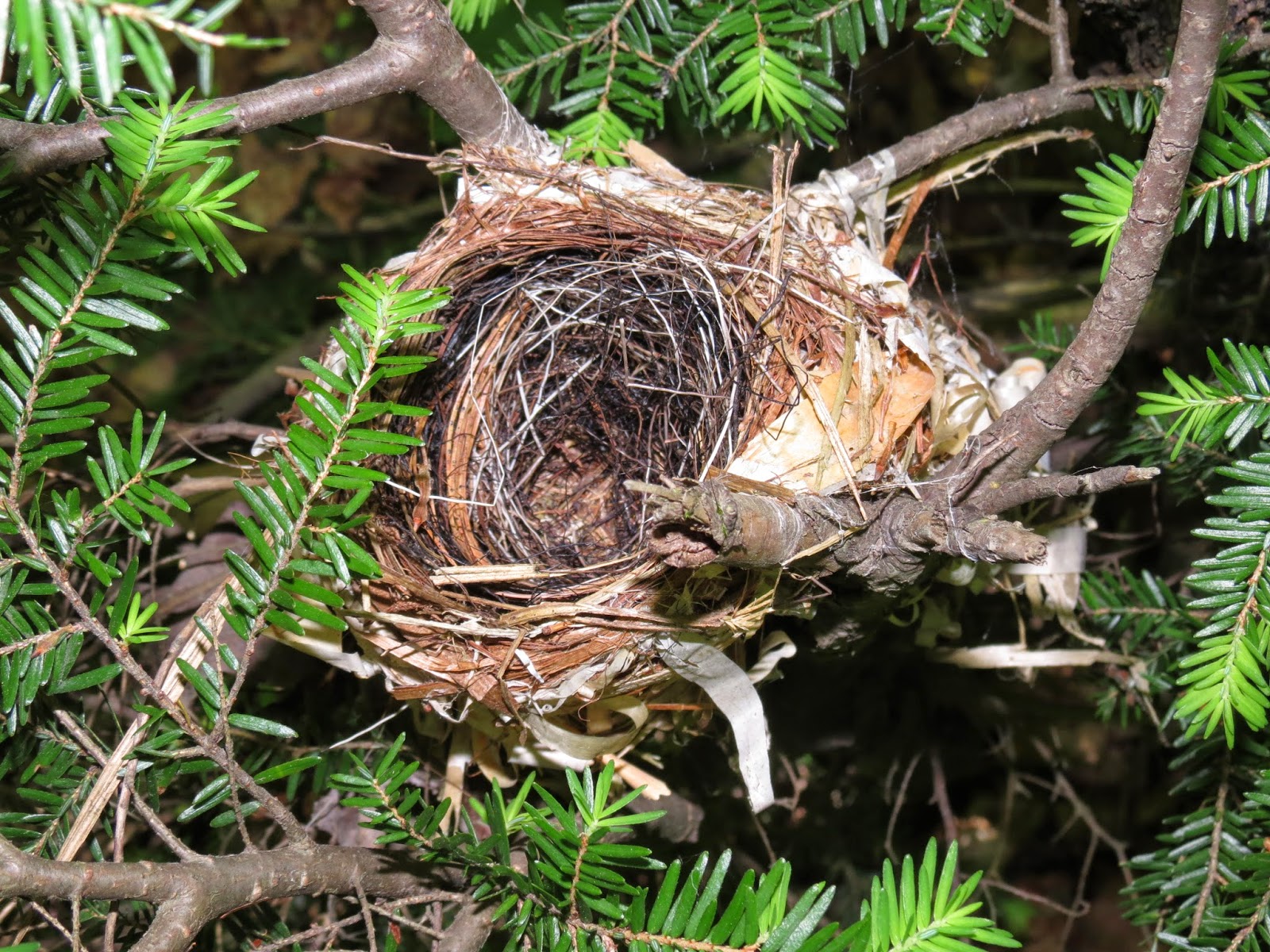 I have no doubt that the snake had just emptied the nest of the eggs or nestlings. Nest predation by garter snakes is rarely observed, but has been documented several times in the past.
Posted by Reuven Martin at 4:19 PM No comments: