Owls and Other Birds


I've done lots of birding in the last few months, and although I haven't had any serious rarities, I've had lots of interesting sightings. Owls are always an attraction in winter so I'll start with a few different species.

When I spotted a small owl low down in a tiny cedar, I was surprised to find this Eastern Screech Owl rather than a Northern Saw-whet Owl which often roosts in this fashion. Not a bird I generally get close views of in the day, so definitely a highlight. 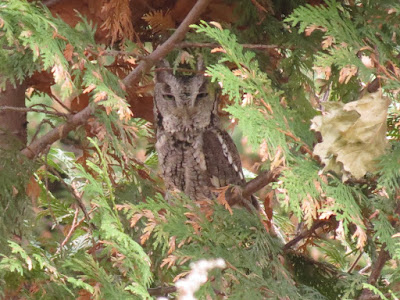 I've also discovered this screech owl roost hole on my patch - it's nice to be able to see one whenever I want! 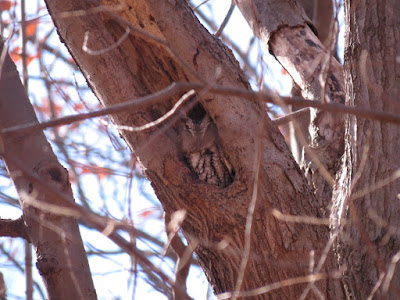 Eastern Screech Owl is one of two common resident owls in this area, the other being Great Horned. One disgusting December day with strong winds and freezing rain I came upon this very unhappy individual. Based on the small size this is probably a male. 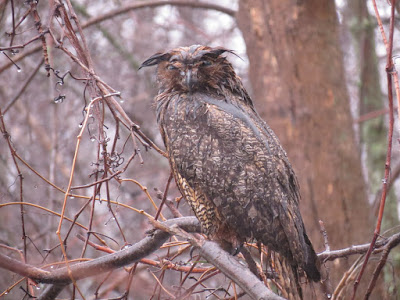 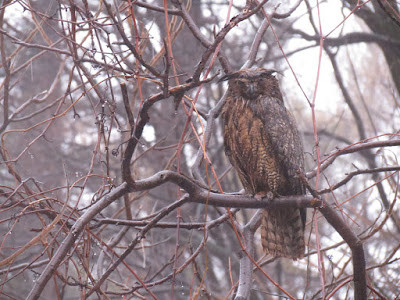 I've "only" had two Snowy Owls this winter, but both have provided great looks. The first was roosting on the roof of a house near Lake Ontario. 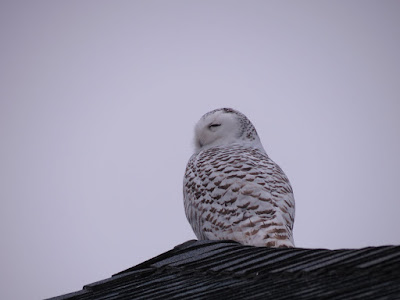 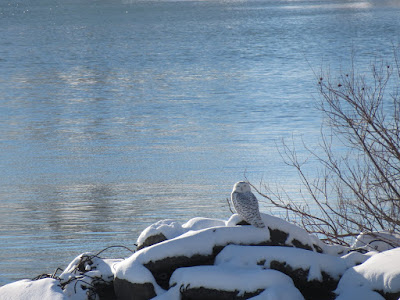 When waterfowl hunting occurs at Rondeau in the fall, large numbers of Canada Geese spend the day resting on the beach where they are safe. I checked these flocks thoroughly several times, and came across one Cackling Goose as well as these two Snow Geese: an adult blue morph and young white morph. 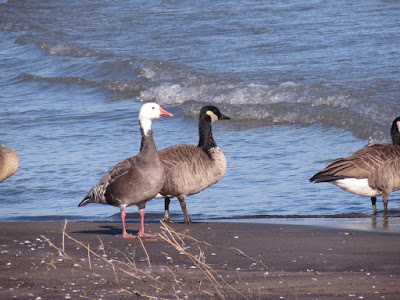 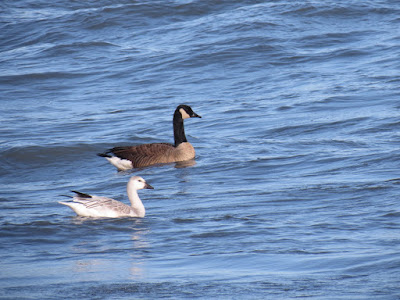 Eared Grebe was another highlight from Rondeau in late fall, with at least two individuals spending time along the beach. Eared Grebe is a western species that only occurs sporadically in Southern Ontario. 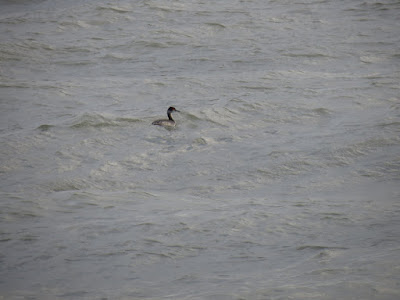 One last highlight from Rondeau was this young Red-headed Woodpecker in early December. Red-headeds only winter in very small numbers in Ontario, and this is by far the latest I've seen. 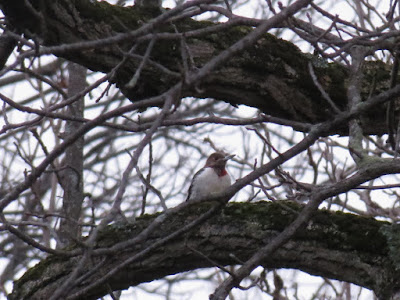 Any shorebird is a nice find in winter, so I was happy to spot this Killdeer along the shores of Lake Erie in Haldimand County in late December. 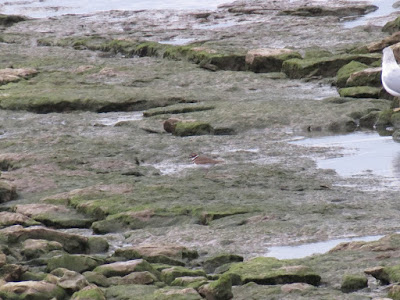 American Pipit is an honorary shorebird, feeding on invertebrates along shores and in wet areas. This one in Mississauga recently is one of very few January records for our area. Presumably it was pushed off of a farm field somewhere with the first major snowfall of the winter. 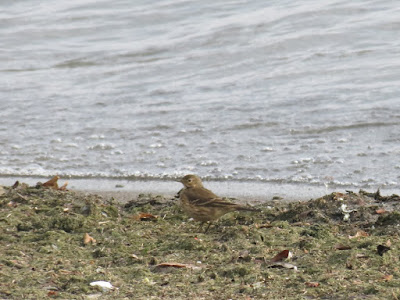 This Northern Shoveler was at the same tiny park. Although it is a common wintering species in Hamilton, shovelers are very rare in Mississauga in winter. 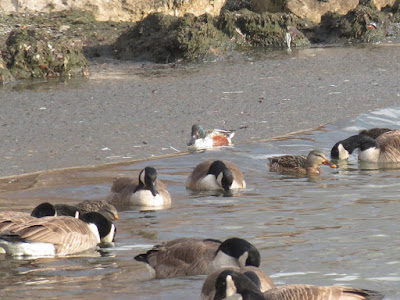 A very nice surprise on my first visit to my patch of the new year was this Common Yellowthroat, seemingly very healthy and active despite its missing tail. A few winter yellowthroats are found each year in Ontario, mostly in marshy areas. Oddly, both winter records for my patch have been in dry weedy areas. 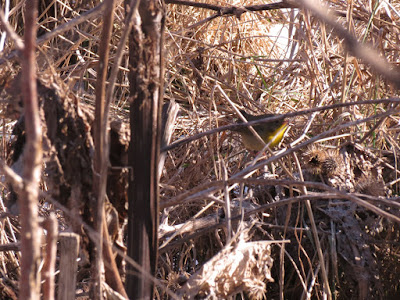 For some reason, leucism seems to be more regular in robins than most other species of birds. This is maybe the tenth one I've seen. 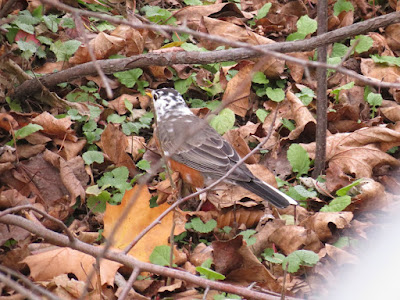 Winter may have some good birds, but I still can't wait for spring! The first Horned Larks, gulls and waterfowl will already be starting to move north on warm days, Great Horned Owls will be starting to nest and male Striped Skunks may even be starting to look for mates.
Posted by Reuven Martin at 8:44 PM 1 comment:

On the evening of January 1st I was in the Algonquin Park Visitor Centre prior to the annual Christmas Bird Count. I noticed on Facebook that an Ivory Gull had been seen in Duluth, Minnesota that day, and mentioned it to Lev Frid. A plan quickly developed, and early in the morning on January 8th our intrepid band of birders (Lev Frid, Amanda Guercio, Justin Peter and I) pulled out the GTA and headed west.

Our first day was mostly driving, but we stopped in Michigan's Upper Peninsula to look for Sharp-tailed Grouse. No luck, but this Rough-legged Hawk was nice. I also noticed an Eastern Fox Squirrel on the side of the road as we drove through the Lower Peninsula, and a massive raft of Redhead in the Straits of Mackinac between Lake Michigan and Huron. 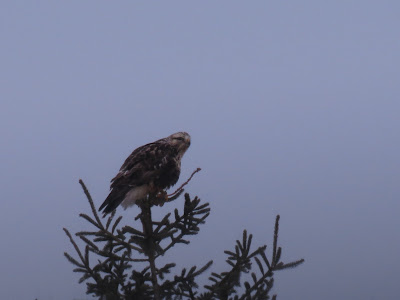 After spending the night in Duluth, we made the short drive to Canal Park, set out an offering of Walmart salmon, and were rewarded almost right away. 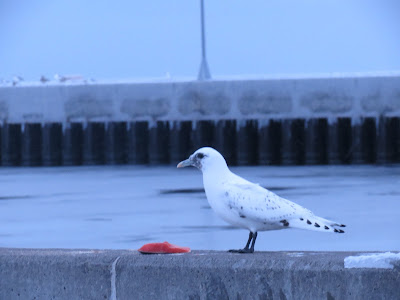 Ivory Gull is a declining high-arctic breeder that very rarely moves south. I've dreamed of seeing this legendary bird for a long time!

After enjoying the Ivory Gull and the other gulls present, including Thayer's, Glaucous and a locally rare Great Black-backed, we made the short drive over to Superior, Wisconsin where two Gyrfalcons are hunting pigeons at the grain elevators. We were treated to quite a show by this immature brown morph (including a nearly-successful pursuit of a pigeon), and also saw the adult gray morph that is present. Another legendary species, and one that I'd also never seen before. 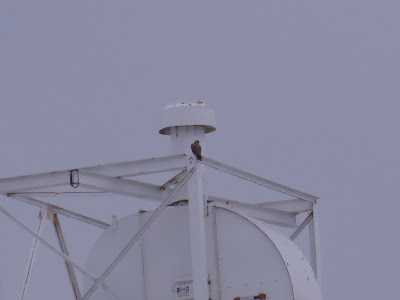 After this fantastic morning, we headed up to the famous Sax-Zim Bog, home of a nice variety of northern and western species. My goals here included Great Gray Owl, Sharp-tailed Grouse, Black-billed Magpie and Pine Grosbeak. There are also Moose, Gray Wolf, Marten and Fisher here.

Despite trying very hard for both, we couldn't find a Great Gray Owl or Sharp-tailed Grouse, but still saw lots including my lifer Black-billed Magpies. Many Pine Grosbeaks were at the visitor centre feeders. 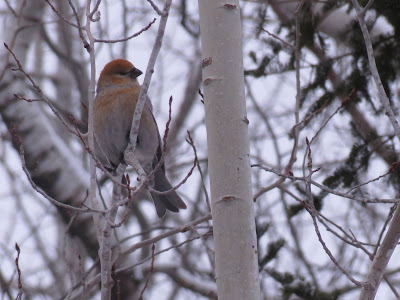 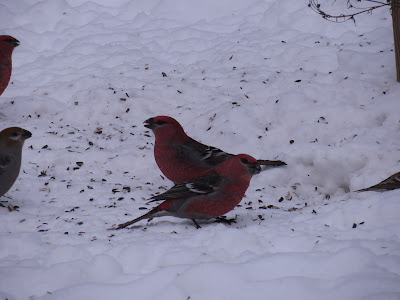 Another feeder held many Evening Grosbeaks. The two magpies were here as well but they flew away immediately when we pulled up, so we couldn't get photos. 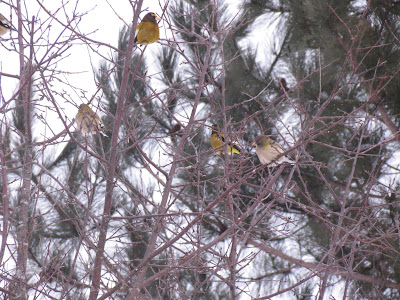 We tried unsuccesfully for Great Gray Owls until dark, and then drove south through Wisconsin to put us near a few interesting birds in the morning. We actually stayed in Minnesota on the other side of the Mississippi River, amid surprisingly spectacular scenery.

A vagrant Lewis's Woodpecker has been visiting a feeder near Galesville, Wisconsin, and we quickly saw it when we got there. 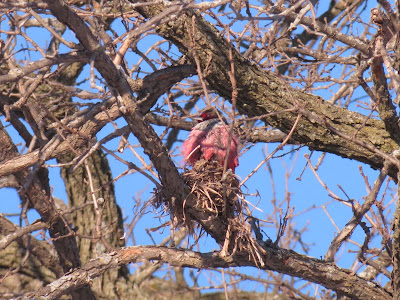 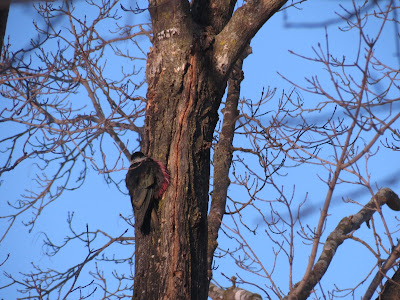 A nice male Oregon Junco was visiting the same feeder. 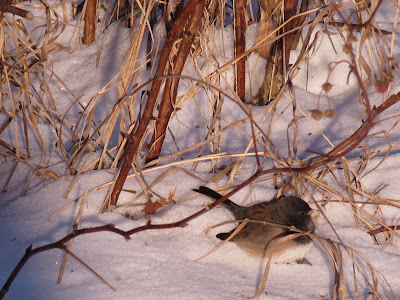 Our last stop of the trip was a region noted for it's wintering eagles, and we soon found this nice Golden as well as a number of Bald Eagles. 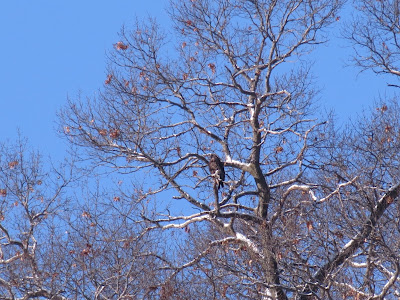 And with that we started the long drive around the south end of Lake Michigan, and eventually pulled into Mississauga around 2 am. An amazing trip, if a bit too short for my liking!
Posted by Reuven Martin at 2:16 PM No comments: