I'm lucky enough to be working in some very cool habitat northwest of Toronto right now. I've had lots of interesting sightings, including probably my nature highlight of the summer so far.

Dorcas Copper is a small butterfly whose caterpillars feed exclusively on Shrubby Cinquefoil (Dasiphora fruticosa). They are widespread in Northern Ontario, ranging south to the southern Bruce Pensinsula. There are also a few locations much further south in Ontario, with records in the Cambridge Area, as well as historic ones from the Pinery Area and from northwest of Toronto.


That last record is no longer historic! We have come across a number of individuals in some very nice habitat with abundant Shrubby Cinquefoil over the last couple of weeks. It's always good to find out that rare species are still hanging on. 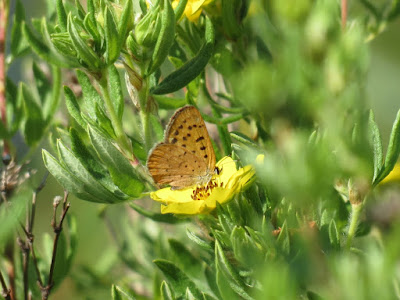 Posted by Reuven Martin at 5:00 PM No comments:

On the way home from Algonquin Park, I decided to stop by the Carden Alvar for much of the day. This area near Lake Simcoe has a fantastic variety of flora and fauna on the thin soil over limestone bedrock. In recent years various organizations have bought up a lot of land here, culminating in the new Carden Alvar Provincial Park. It's great to know that such a great area is being properly protected.

On past visits to Carden, I've spend most of my time walking or driving along various quiet roads. This time I ended up hiking three trails, all of which are believe are quite new.

The trail at Cameron Ranch passes through a few different habitats, but mostly in some beautiful open grassland and shrubland areas. I was a bit late in the season and in the day for much bird activity, although I did see a few interesting things including Grasshopper and Vesper Sparrow. More exciting was the variety of plants found here.

I am used to seeing Shrubby Cinquefoil (Dasiphora fruticosa) in fens, so was a little surprised to see many of them in a dry open field. I suspect the limestone here provides similar alkaline conditions to those in fens. 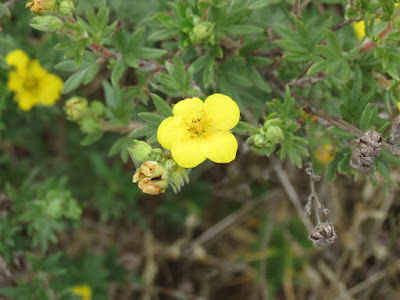 Wild Bergamot (Monarda fistulosa) was abundant in all open areas. 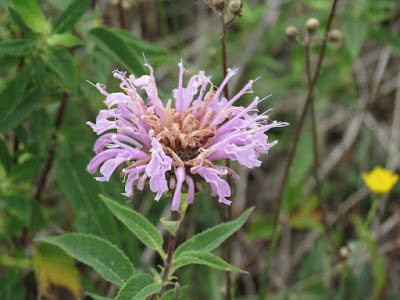 White Camas (Anticlea elegans) was a new one for me. Like Shrubby Cinquefoil, this species is apparently characteristic of calcareous areas. 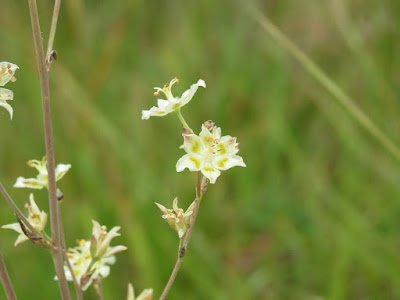 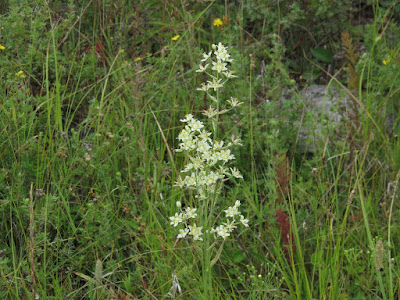 I wasn't able to cover this entire trail, as a Black Bear was settled in feed on berries in the middle of it! I got a bit closer then I should have before noticing it, so wasn't going to stick around for photos. I did see a bear at Algonquin Park though, so I'll add a photo of it: 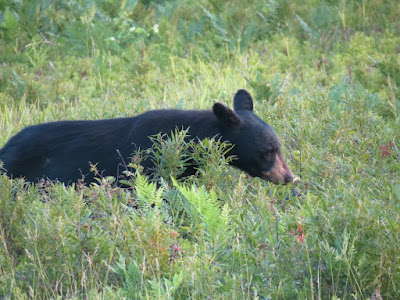 Despite the bear, I would highly recommend this trail at Cameron Ranch! Grassland habitat is quite rare nowadays in Ontario, and even rarer are the places where trails pass through it.

Next, I headed down Wylie Rd., where most of the birding activity happens locally. Here I saw Loggerhead Shrike and Sedge Wren, and walked the trail at the aptly named Sedge Wren Marsh. This trail wasn't super exciting, mostly passing through rather disturbed forest, but it is certainly nice to get off the road for a while.

I did come across this interesting white variety of Red Baneberry (Actaea rubra). This species can normally be distinguinshed from White Baneberry (A. pachypoda) by the colour of the berries, but just to confuse you sometimes these two species can have the wrong colour. You can tell this is A. rubra as the berries have only small dots at the end and thin stalks. In case you think this looks tasty, you should know that both species are extremely poisonous. 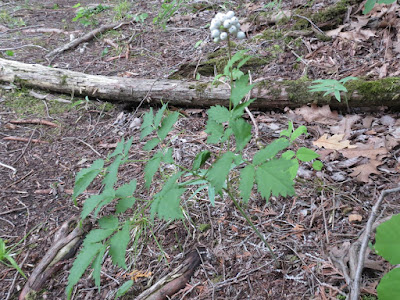 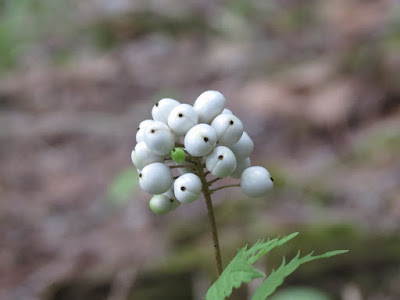 My final stop was at North Bear Alvar. I knew about this spot only due to a reference that it was open to the public despite having no trails, and as a result was pretty surprised to find a long and well-marked trail here, complete with some of the best interpretive signs I've ever seen. 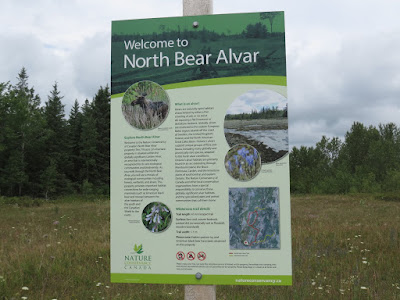 This spot is quite different from other parts of Carden Alvar I've been to, with much less grassy habitat, but with lots of low shrubs and conifers instead. I'm guessing the difference is that this area is not grazed by cattle.


Cooper's Milkvetch (Astragalus neglectus) (I think that's what this is) was already going to seed. This is a fairly uncommon species in Ontario. 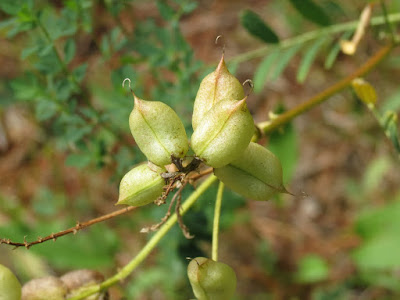 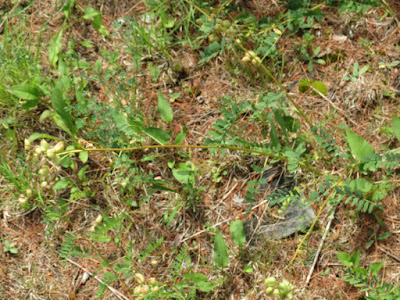 I noticed this Punctured Tiger Beetle (Cicindela punctulata) running on the trail. 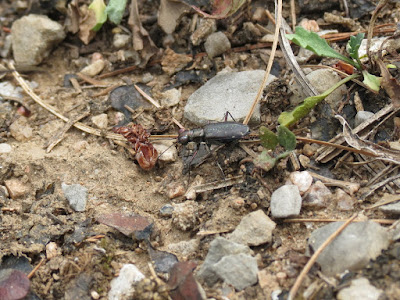 A nice highlight for me was a new butterfly - Columbine Duskywing (I actually saw some earlier this weekend at Torrance Barrens, but got nicer pictures at Carden). This species is very similar to the familiar Wild Indigo Duskywing. Luckily, they are often separable by range and habitat. Wild Indigo Duskywing, despite the name, feeds mostly on Crown Vetch (Securigera varia) in weedy fields, roadsides and similar habitats. There was no Crown Vetch at this location, and plenty of Wild Columbine (Aquilegia canadensis). Columbine Duskywing is somewhat smaller than Wild Indigo, and I was surprised to find the difference was actually quite noticeable. Either that, or I'm just fooling myself! 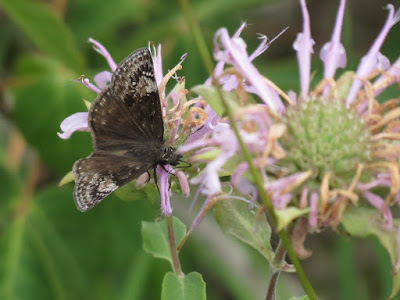 The abundant lakes in this area attract numerous Osprey, and after about the fifth nest I decided I had to stop and take a picture of the babies. As you can see, they are just about fully grown, and have surely left the nest by the time I'm writing this post two weeks later. 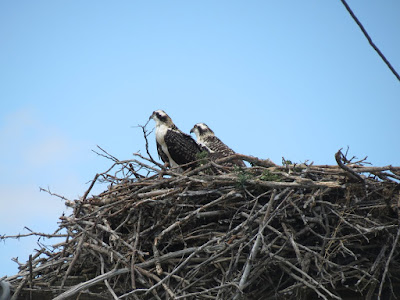 Posted by Reuven Martin at 8:23 PM No comments: