I just got back a few days ago from a trip through Quebec with my girlfriend. We had a great time, with some pretty exciting birds along the way. The standout highlight was the numbers of Snow Geese present. I'll let this video set the scene.

At Baie-du-Febvre huge numbers of Greater Snow Geese stop over every spring and fall, and we were able to get close views of some pretty impressive flocks. I guessed that there were, as a very minimum, fifty thousand birds present, but the number could be much higher. 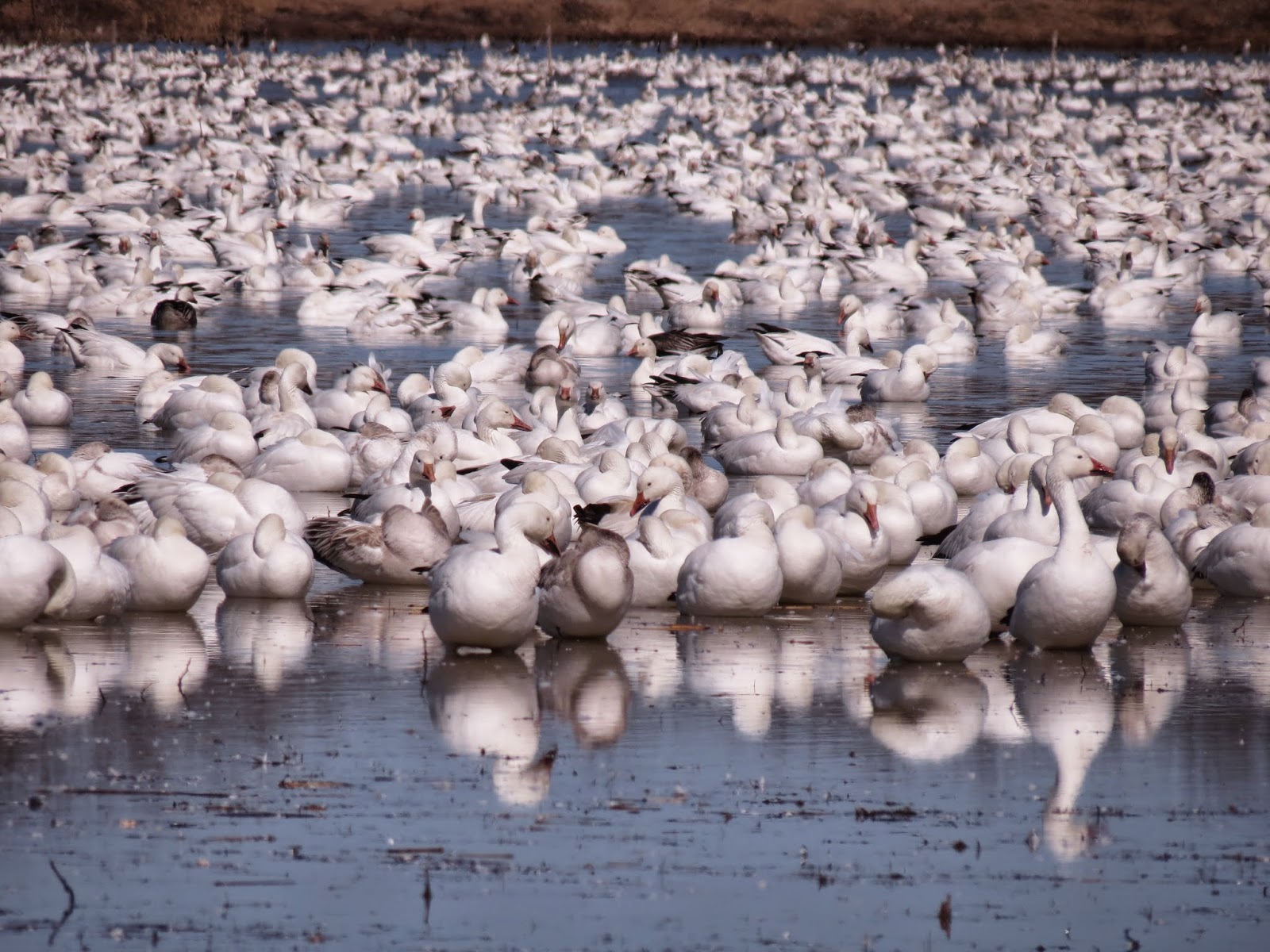 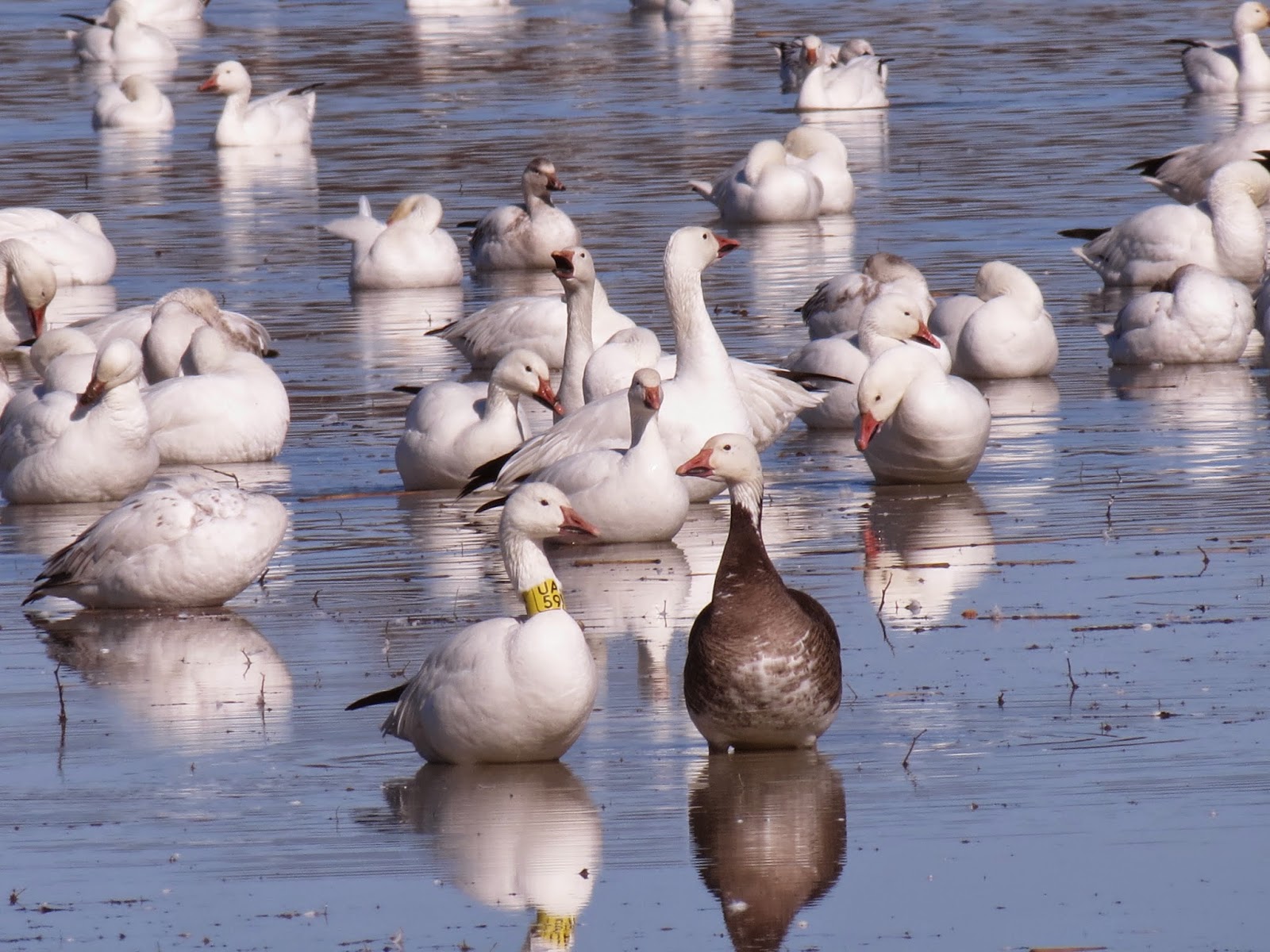 This banded bird was hanging out with a blue morph Snow Goose. Unfortunately I think there were more letters around the band that I couldn't read.

Blue morphs are very common in the western Lesser Snow Geese, but I would say only about 1 in 500 or so were blue morphs in these flocks of Greaters.

Although their numbers paled in comparison, there were many other waterfowl present. Most abundant were Canada Goose (5000+) and Northern Pintail, Green-winged Teal and Ring-necked Duck (1000+ each). The rarest bird was this male Eurasian Wigeon that was one of the very first birds we saw. 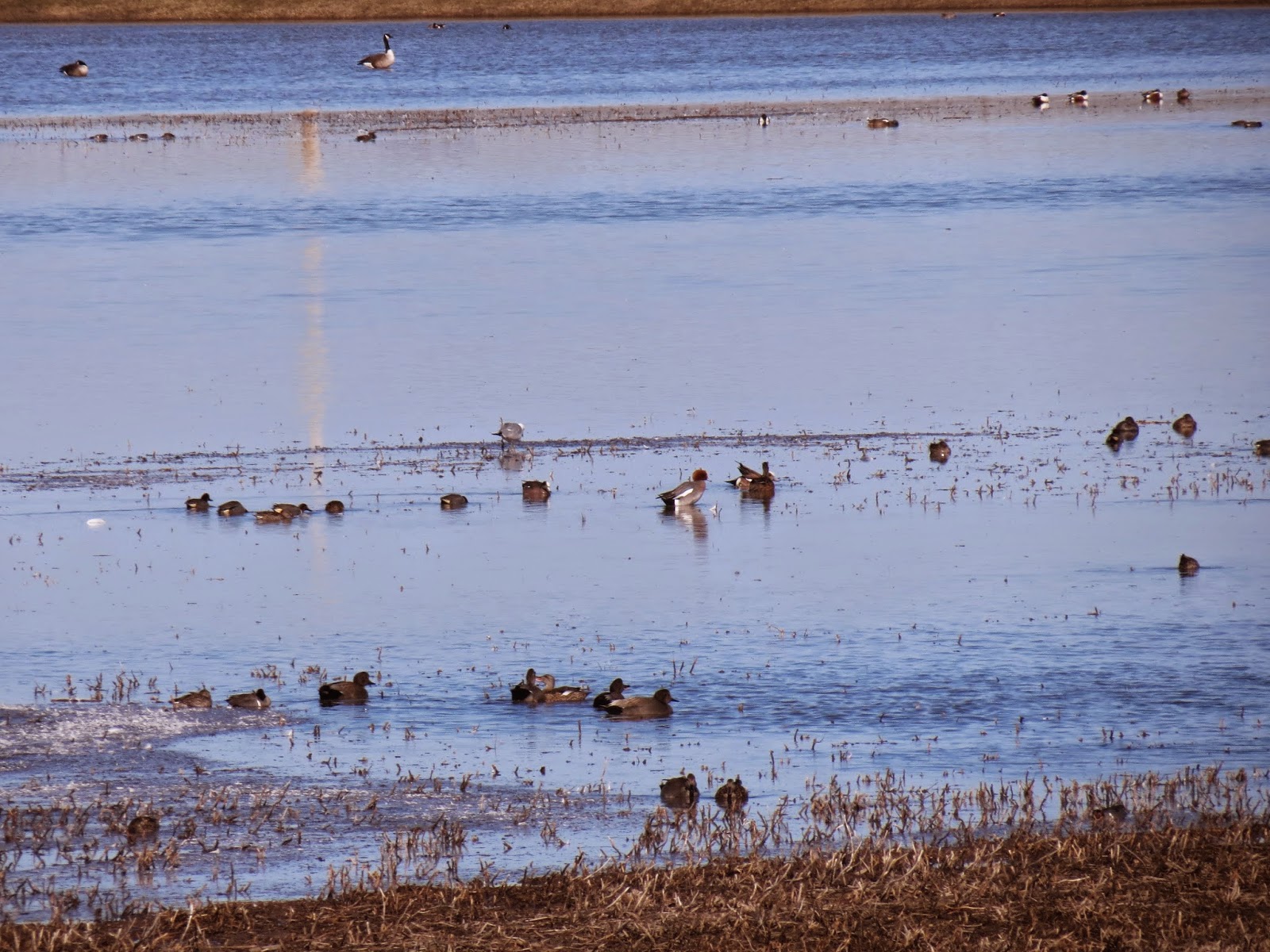 Look for the bird in the middle with a reddish head and grey body. I've now seen three of these guys this spring!

We continued east to Quebec City and beyond, and traveled up the north shore of the Gulf of St. Lawrence. We had limited time but did see a few seabirds, including Common Eider, Barrow's Goldeneye and Black Guillemot (the last being a lifer for me). Based on an estimated eastern population of 4500 Barrow's Goldeneye, the 50-100 birds we saw represent 1-2 percent! 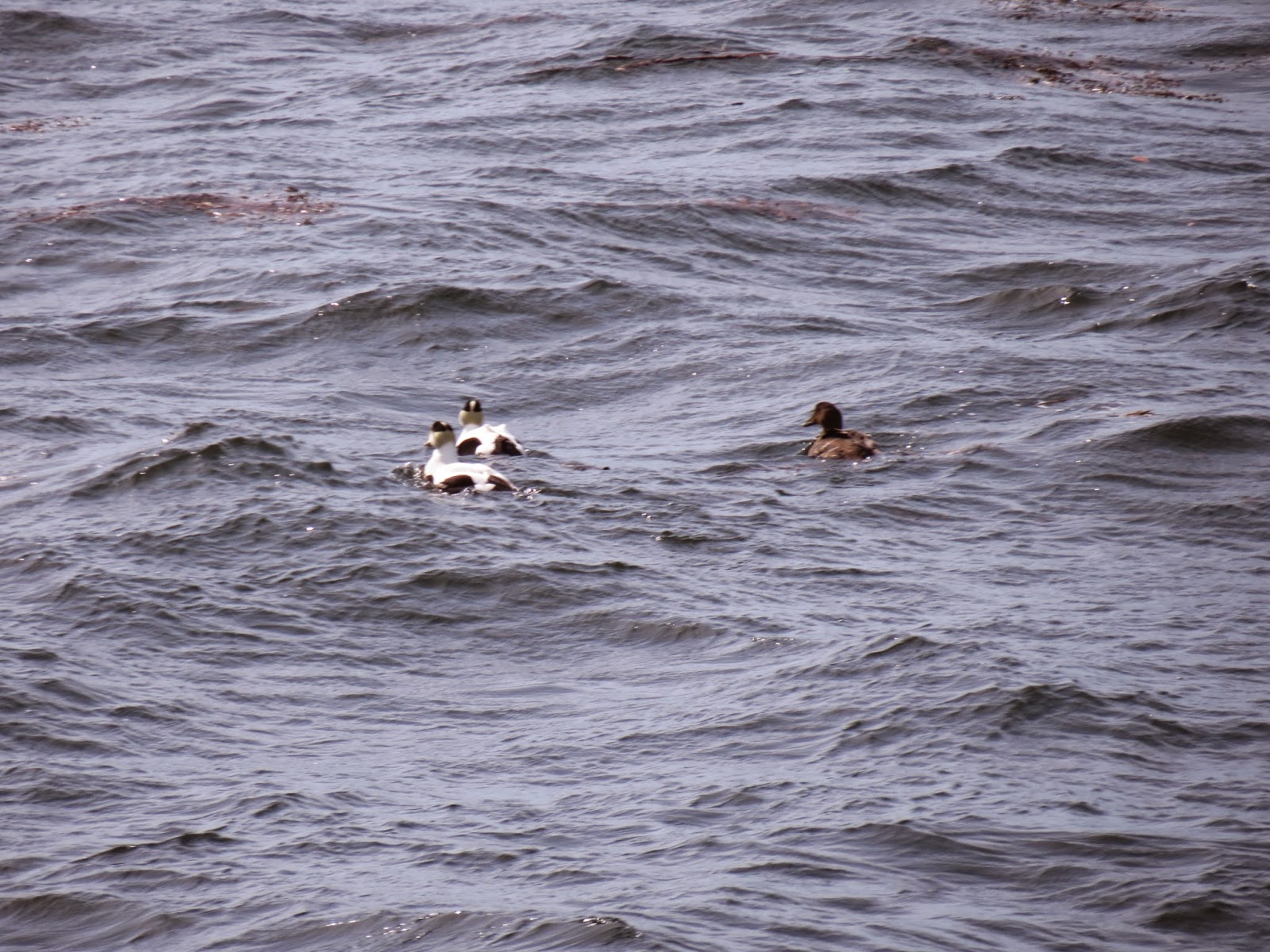 Only the eiders were close enough for (bad) photos. This is the largest species of duck in North America.

At the eastern end of Quebec City, large tidal mudflats were exposed and we were very surprised to see another massive gathering of Snow Geese. We were treated to the sight of the entire flock taking off at once, something very impressive we'd missed earlier at Baie-du-Febvre. 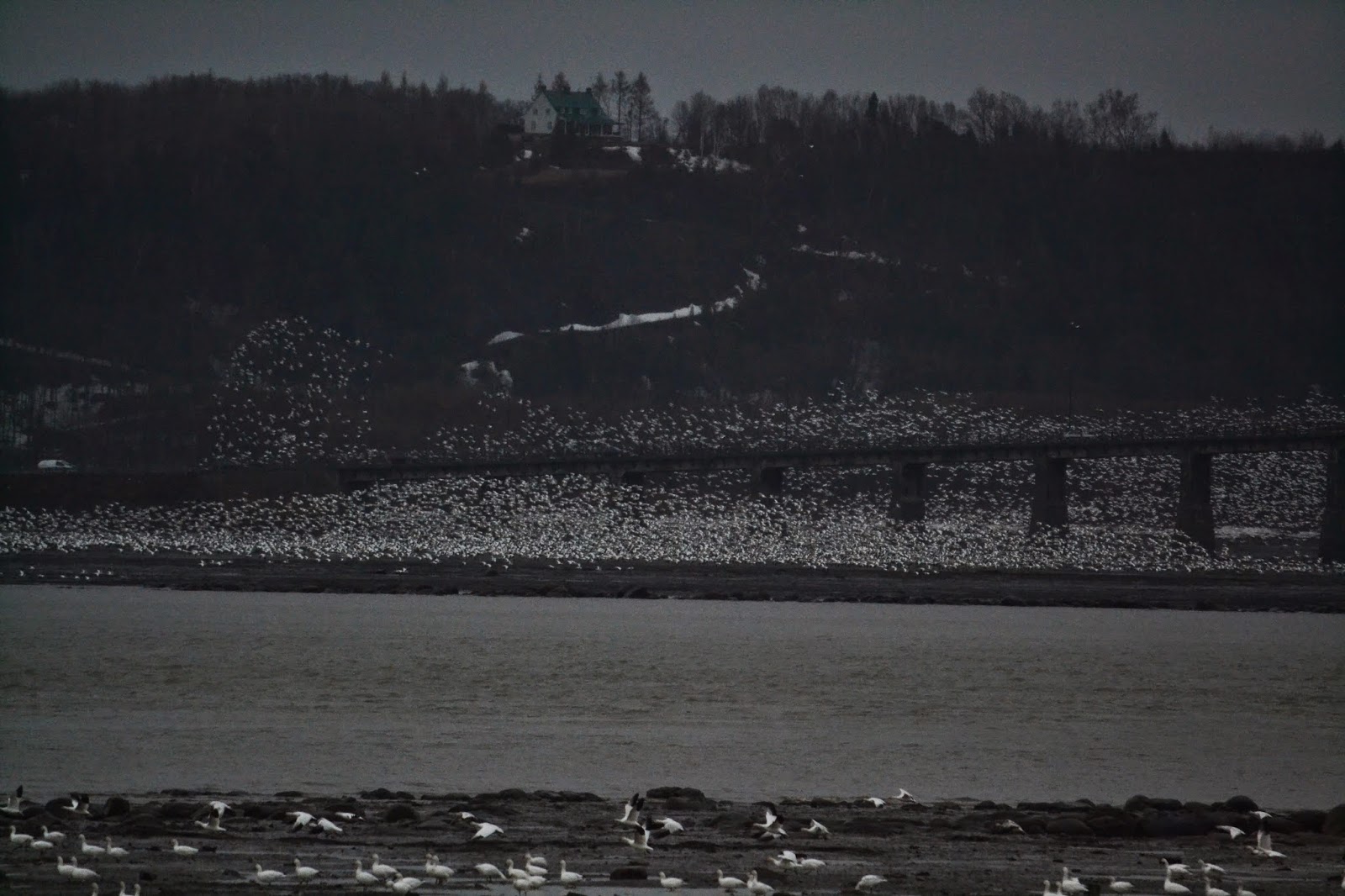 Overall an exciting, if whirlwind trip!
Posted by Reuven Martin at 7:38 PM No comments:

As the weather warms reptiles and amphibians are starting to emerge. Many amphibians reproduce immediately on the first few warm rainy nights in early April. 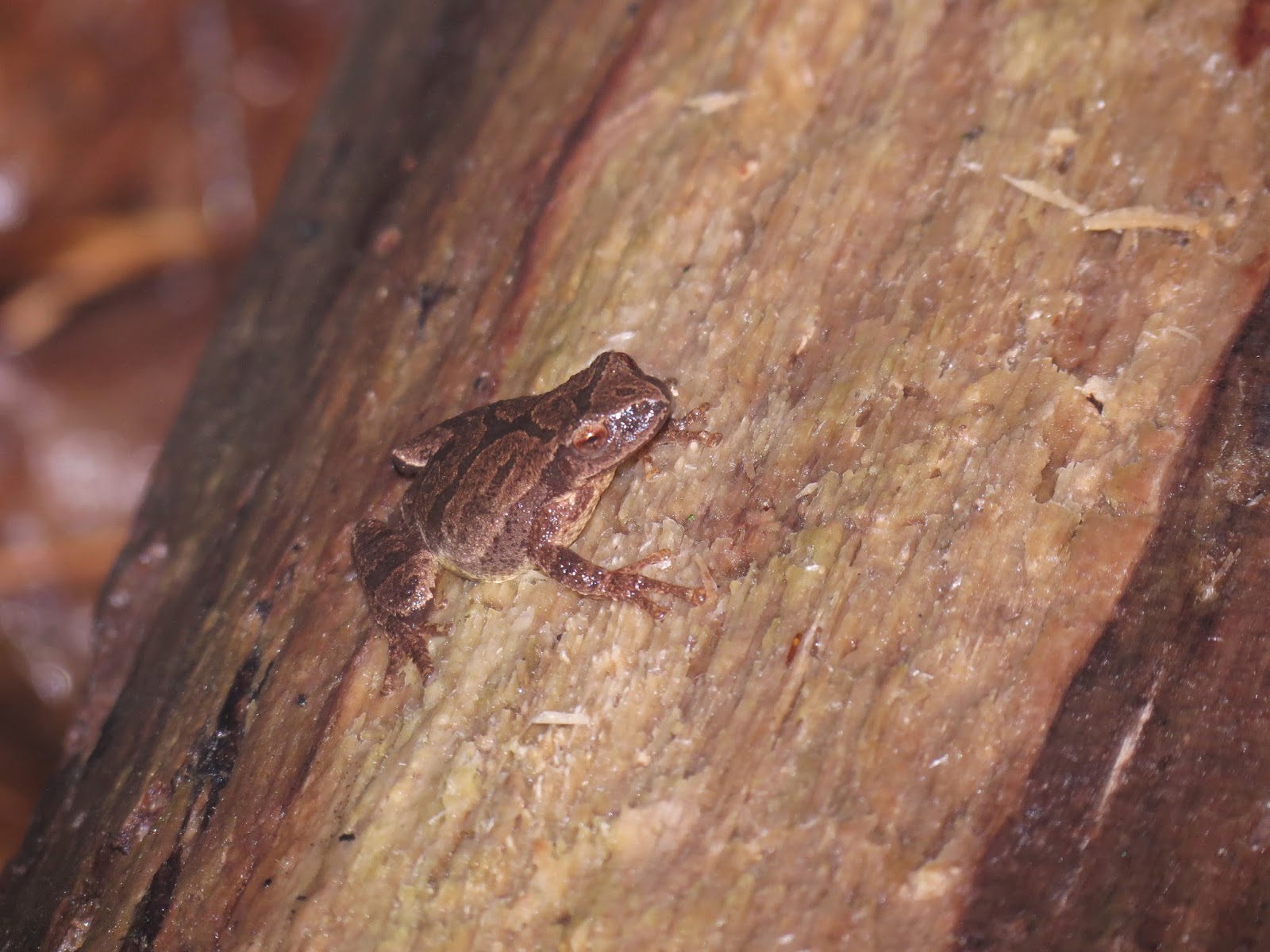 Spring Peepers are a tiny treefrog with an incredible voice - I've leaned down to a calling individual about a foot from my ear, and found it painfully loud! This night was quite cold to start, only warming up later. This little guy was our first amphibian of the night, and was completely immobile in the chilly temperatures. 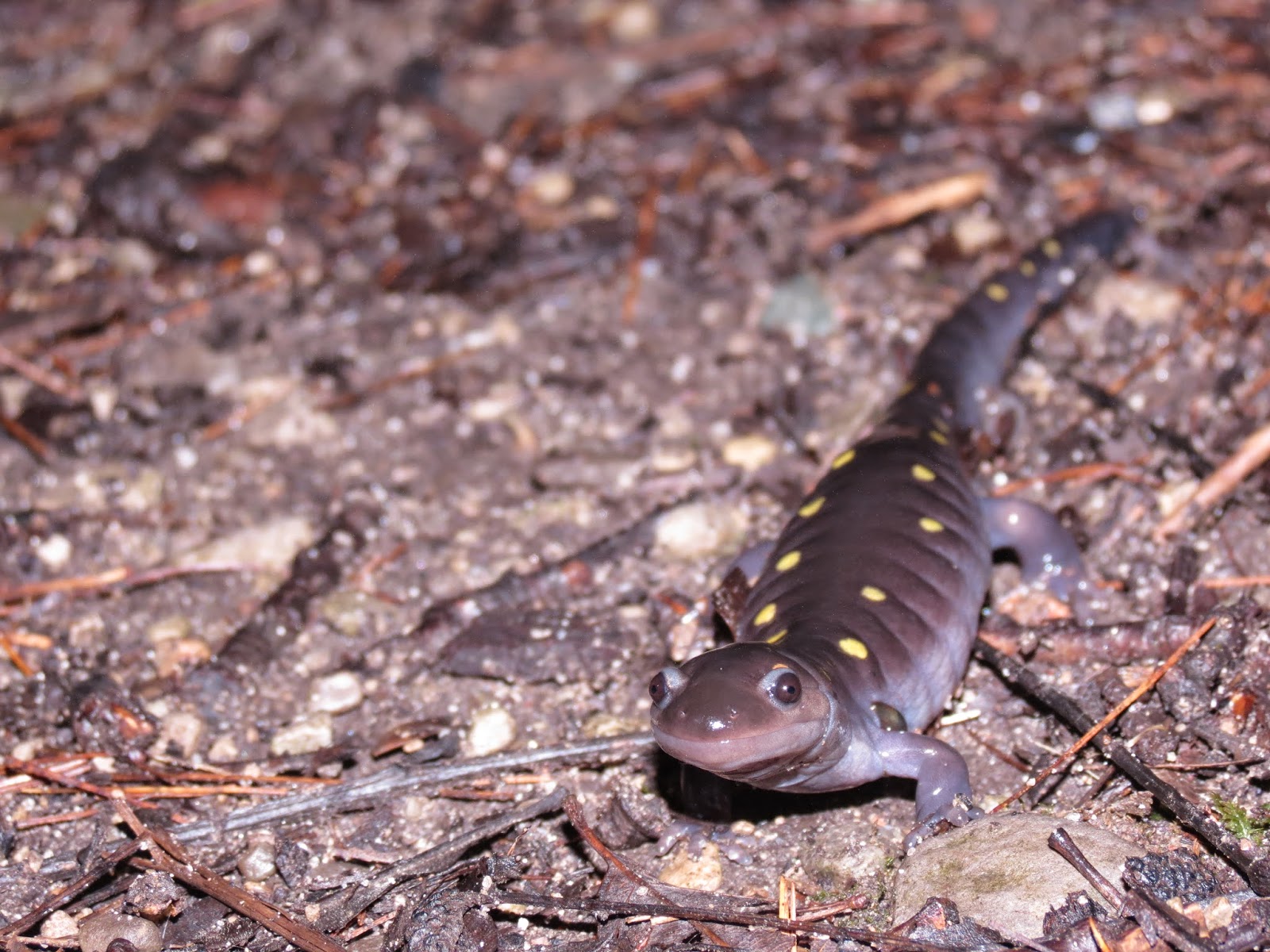 The main appeal of looking for amphibians early in the spring is several species of salamander that are otherwise very rarely seen. Spotted Salamanders really stand out, even when underwater, with those neon yellow spots. 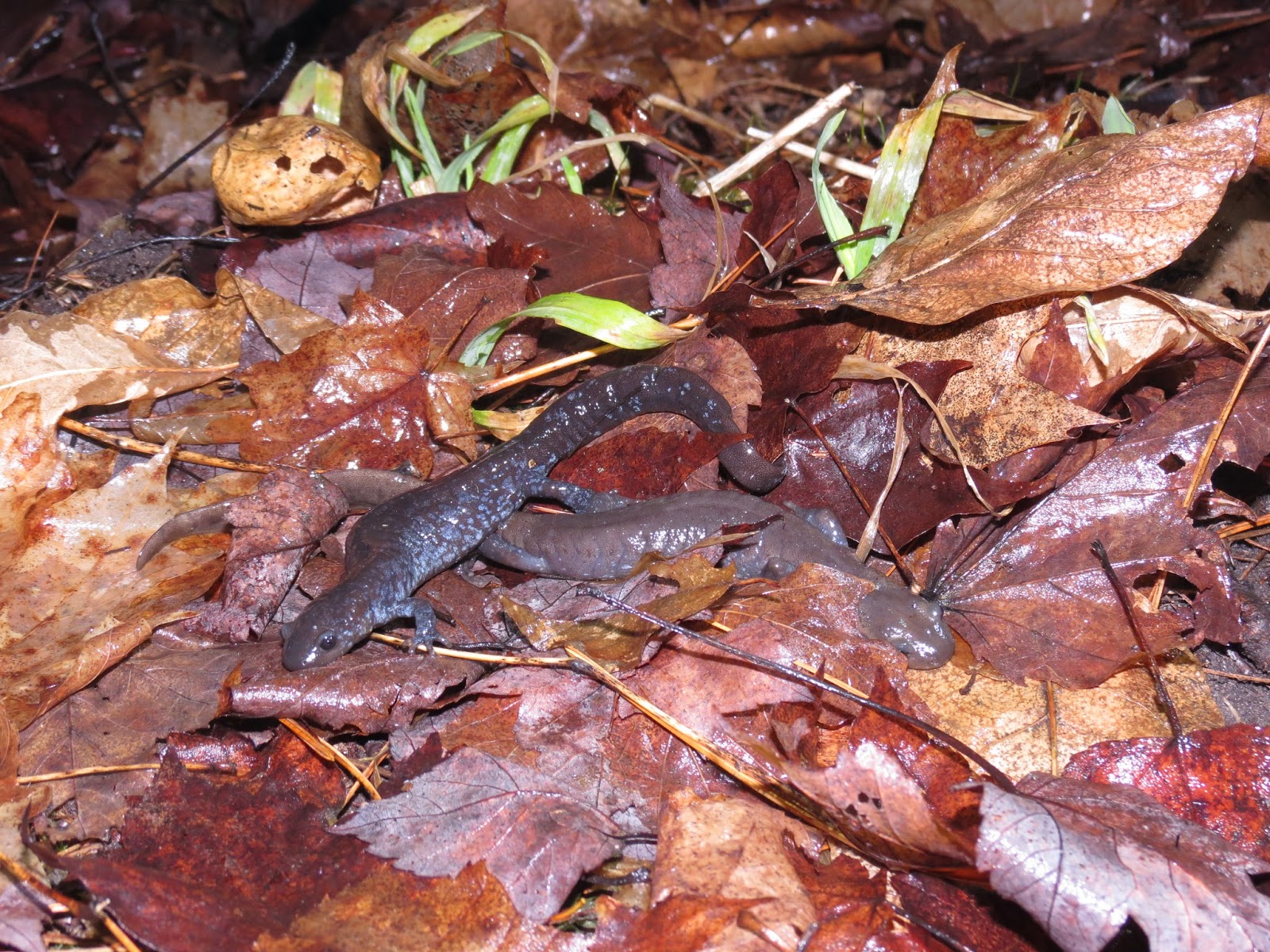 Two other species in the same genus are found locally - the Blue-spotted and Jefferson's Salamander. However, things aren't that simple as the parent species are often outnumbered by polyploid indivduals, with more copies of each chromosome (most animals, including humans, have 2 copies of each chromosome). These individuals incorporate genetic material from both species, but are stable populations, with little to no interbreeding with the parent species. These polyploids, which are almost always female, still need to breed with a male to lay eggs, but produce young using only their own chromosomes. A pretty crazy story for these unassuming little creatures!
In the photo above, the left individual looks more like a Blue-spotted, and the right more like a Jefferson's, but quite likely both are polyploid individuals. 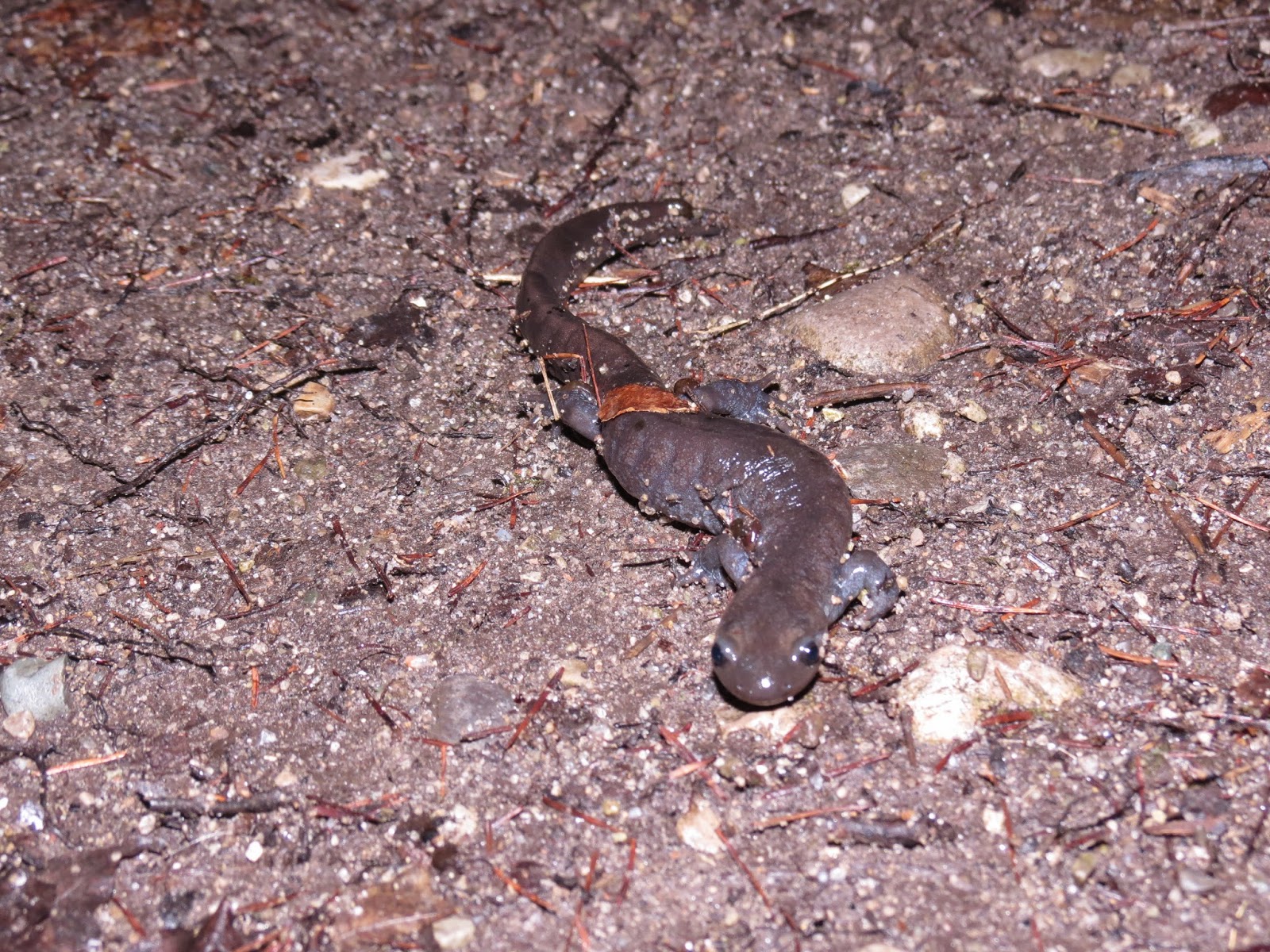 This is another Jefferson-like individual. Jefferson's are endangered in Ontario, as they require intact forest which is increasingly rare in their Southern Ontario range. 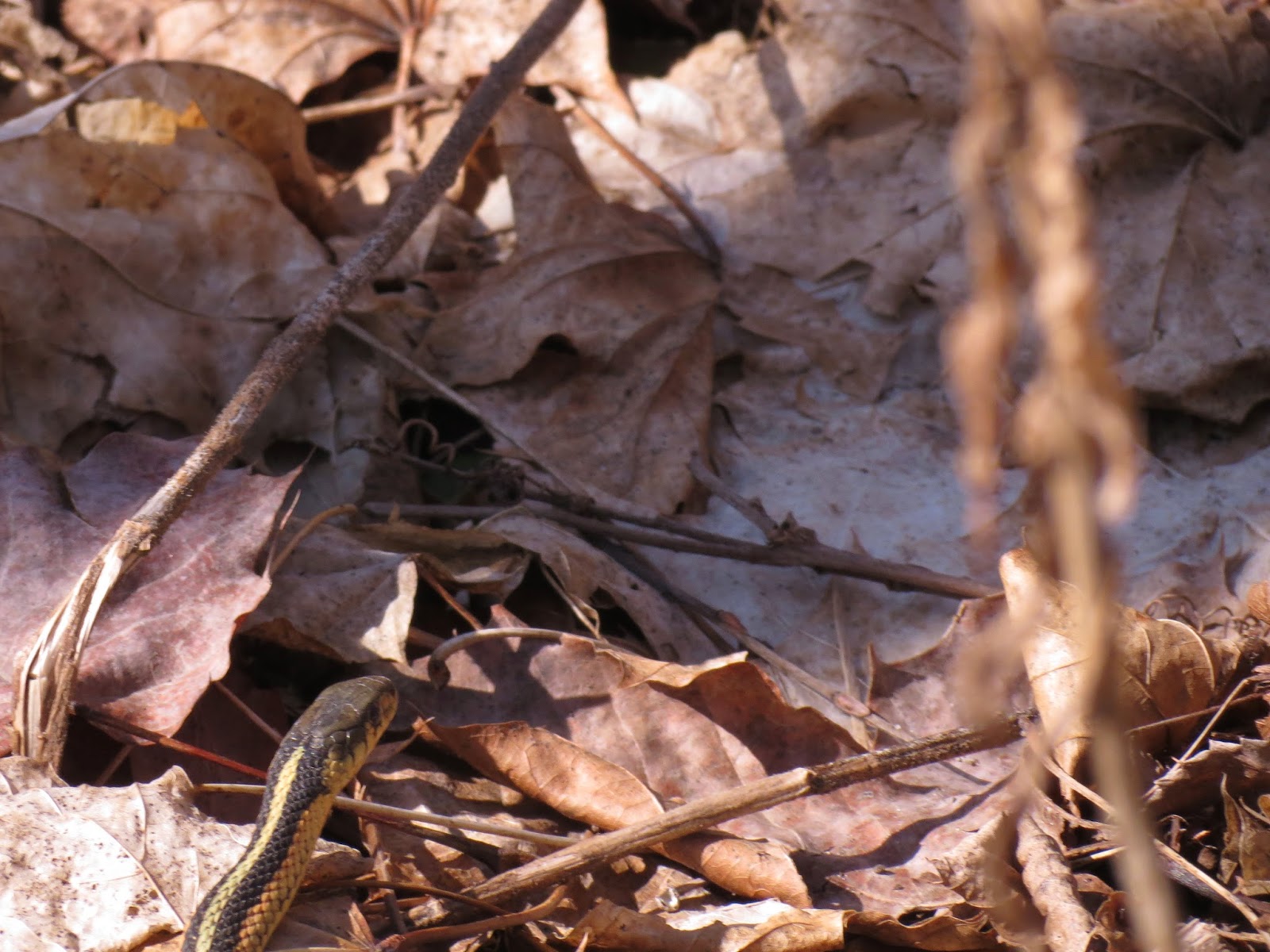 Although Garter Snakes are very adaptable, they especially use worms and frogs for food, and so often become very active once the first warm, rainy weather hits.
Posted by Reuven Martin at 10:00 PM No comments: