There are lots of great forums, Facebook pages, email lists and similar things online about various aspects of nature in Ontario, but finding out about them is not always easy. To help with this, I have compiled a list of all the groups I know of here. You can also visit it from the link at the top of the page. Check it out, and please let me know if you know of any additions, as I'm sure I've missed plenty! 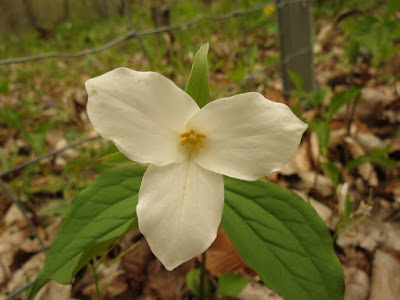 With the exception of one frigid weekend, winter continues to be abnormally warm in Southern Ontario. In late January/early February a very warm spell brought some new migrants into Ontario, particularly waterfowl.

The big story has been geese - Ross's, Lesser Snow and Greater White-fronted Geese, all of which normally migrate well to our west, have turned up in close to unprecedented numbers. Of course, with the way most goose populations have been exploding, unprecedented numbers are not unprecedented! Still, they are very nice to see for Southern Ontarians who often pick through thousands of Canada Geese without finding another species.

I spent a bunch of time in the Rondeau area. On the way down I stopped at the Ridgetown Sewage Lagoons and was very happy to come across a flock of 12 Greater White-fronted Geese. 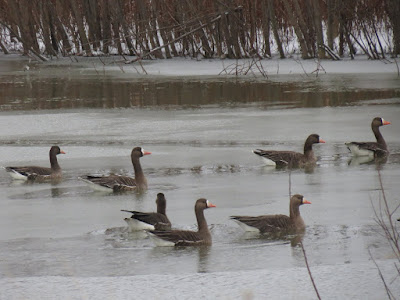 Although they have increased dramatically, "specklebellies" are still an exciting find.

The largest group of Snow Geese seen in Ontario recently was the flock of over 200 at Rondeau Bay. This flock had been seen repeatedly for a few days, but I was the first one to pick several Ross's Geese (a lifer for me!) out of the flock. I think this has less to do with birding skill, and more to do with the fact that I was (I believe) the first person to get extended close views of the main group! They still weren't close enough for good photos, but I was able to get good scope views of at least two of the much smaller and stubbier-billed Ross's Geese. 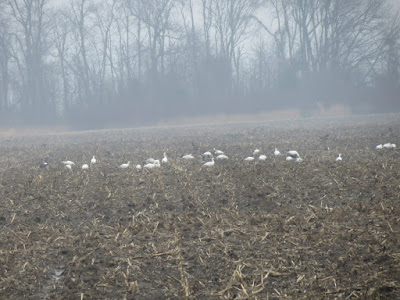 These rare geese were not my best waterfowl in the area. While looking through the large numbers of Tundra Swans hanging out around the edges of Rondeau, I noticed a swan with a large square yellow patch on the upper bill - a Bewick's Swan. This is the Old World subspecies of Tundra Swan, and is rarely seen in North America. Certainly one of the rarest birds I've found. Too far for photos unfortunately.

There was some confusion initially as it turned out that Blake Mann et al. had seen a leucistic swan there that very morning which also showed a large yellow patch on the bill. I started to doubt myself, but it turned out that there were indeed two birds present. I did eventually see that bird as well a couple of days later, again too far for photos (Blake has photos of this bird on his blog, I don't know if anyone got photos of the Bewick's).

I'm not sure what to make of this leucistic swan - it seems too unlikely for a rare vagrant to also be a rare leucistic bird, but that certainly seems to be the case! I wonder if a leucistic Tundra Swan from the North American population could also show this yellow patch. We may never know!

I did see some birds other than waterfowl of course! I have spent very little time in the Rondeau area outside of springtime, so wanted to get some winter birds for my local list. Some time spent around the dump netted me lots of gulls resting in fields, including my first Lesser Black-backed and Glaucous for the area. This is an adult Lesser Black-backed, note the small, slim shape and dark grey (not black) back. 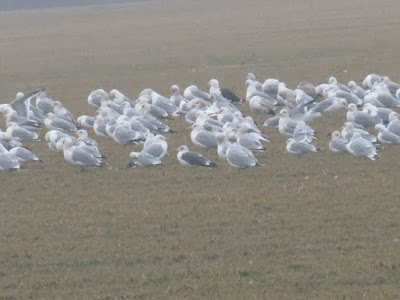 One attraction of Southwestern Ontario not present farther north is the large numbers of blackbirds wintering in farmland. I came across several flocks, including this one which included Red-winged Blackbirds, Brown-headed Cowbirds, Common Grackles (not in this photo), European Starlings and House Sparrows. All you need is a crow and you get a list of the grain farmer's most hated birds! 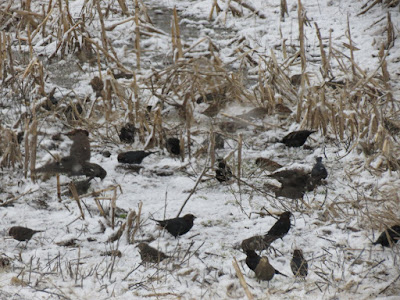 Back to Mississauga, blackbirds are quite unusual in winter time. I did come across this male Red-winged Blackbird, which may have been a very early migrant in the warm weather. 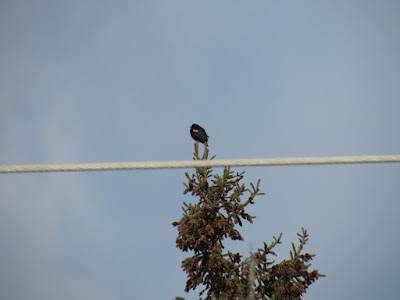 Winter's biggest redeeming feature is the owls, so I'll finish up with a couple species I've come across recently.

First, a Barred Owl that was sitting beside the parking lot of a local conservation area: 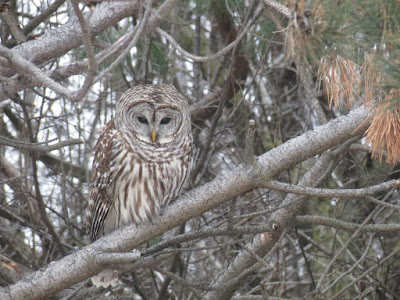 And a well-hidden Long-eared Owl in the same small patch of conifers I see one in every winter: 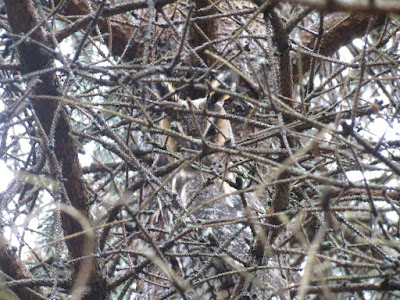 Posted by Reuven Martin at 9:27 PM No comments: