Local birders will be well aware of the annual show at Sedgewick Park in Oakville, where a water treatment plant attracts a variety of insect-eating birds in early winter. Six species of warbler were present here at the beginning of December, most notably the Tennessee Warbler pictured below. I believe this is the first winter record for Ontario. 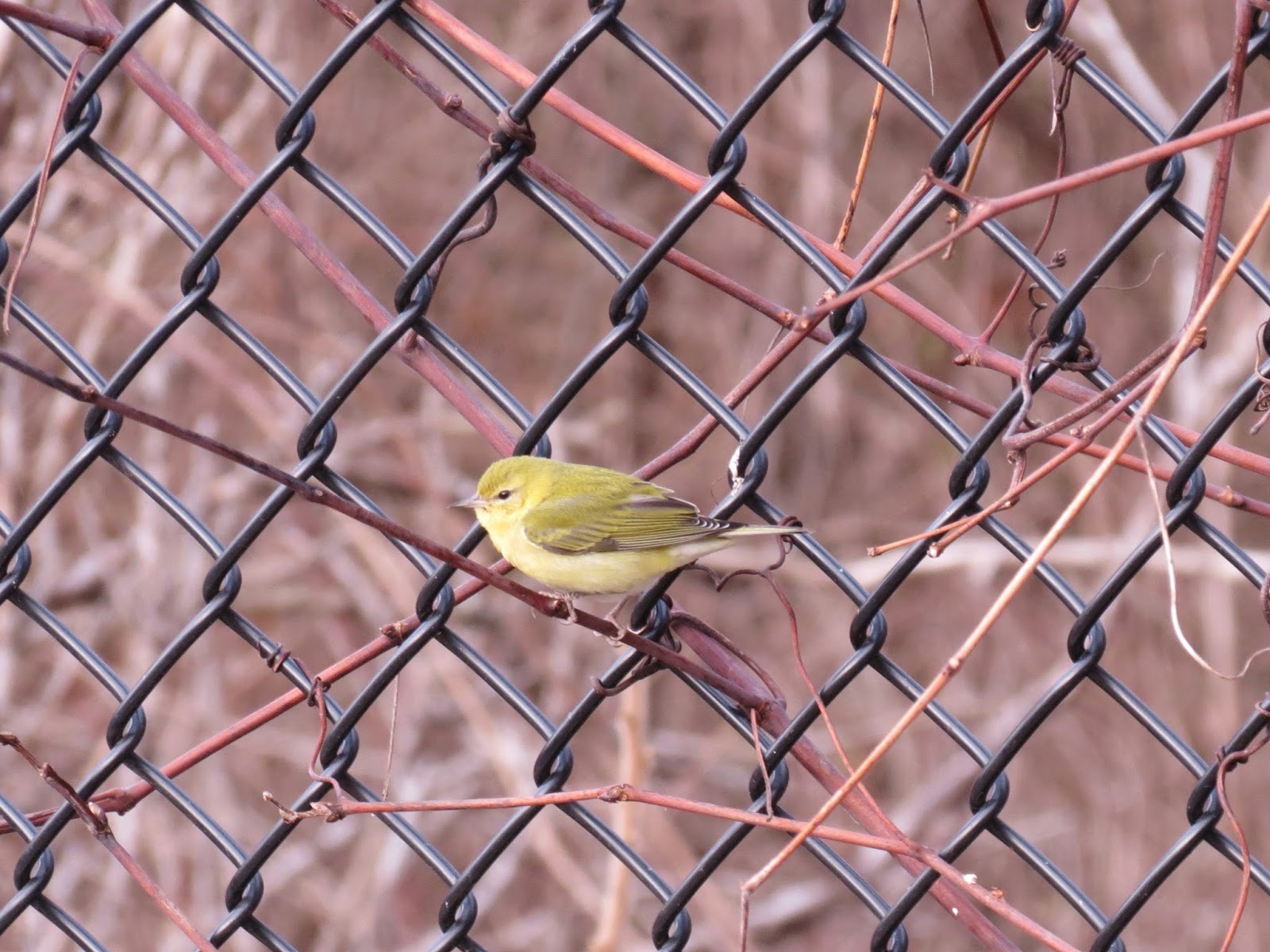 Just around the corner from Sedgewick Park I chased a reported Brant, the first good view I've had of one in a few years. This goose is tiny compared to Canada Geese, and generally only appears regularly in our area in late fall and early winter. 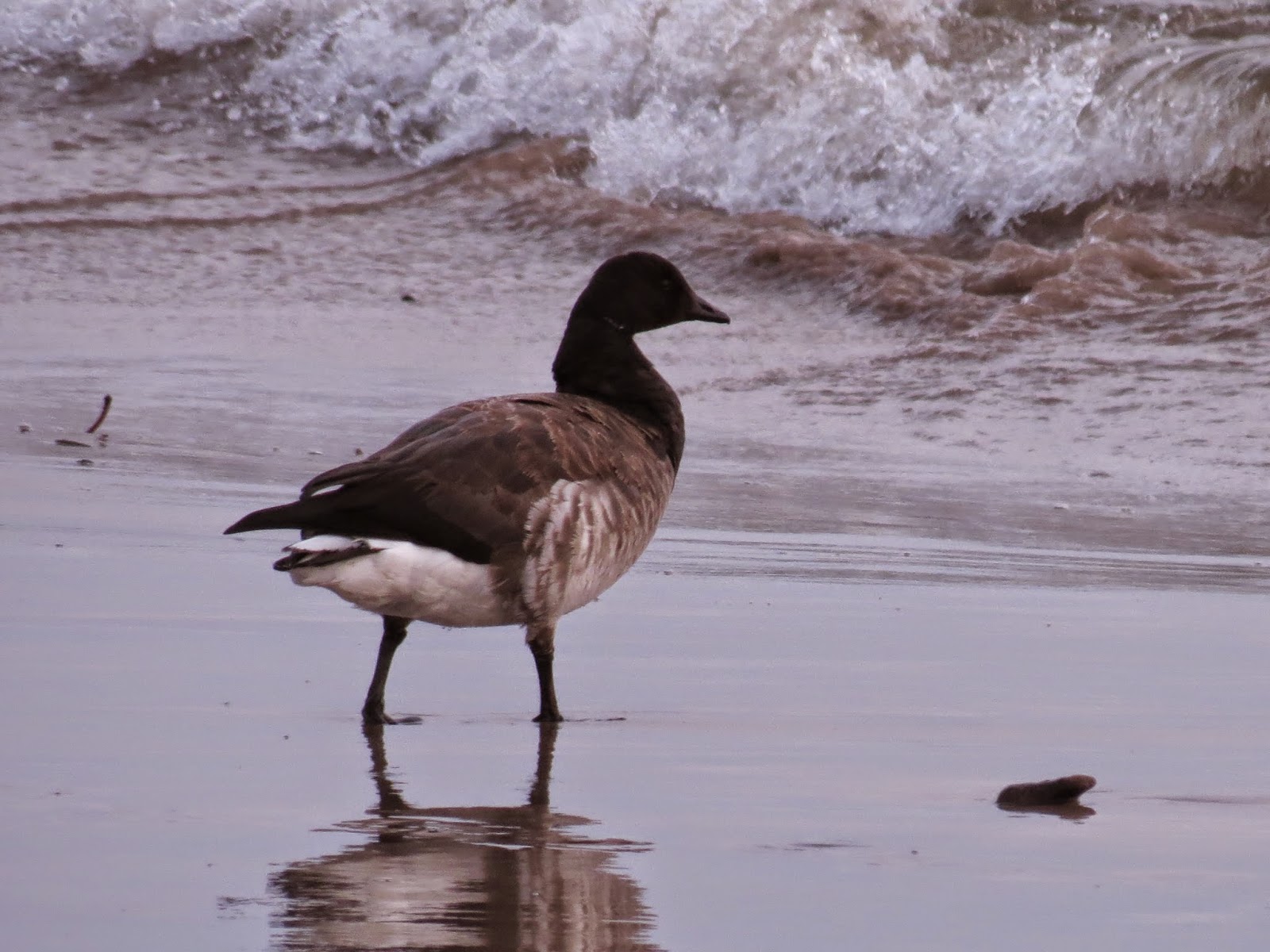 There seems to a multitude of less hardy birds attempting to overwinter this year. This Red-winged Blackbird and Fox Sparrow were both among a huge flock of birds in some open woods along the lake in Mississauga, and neither are species I regularly encounter in winter. 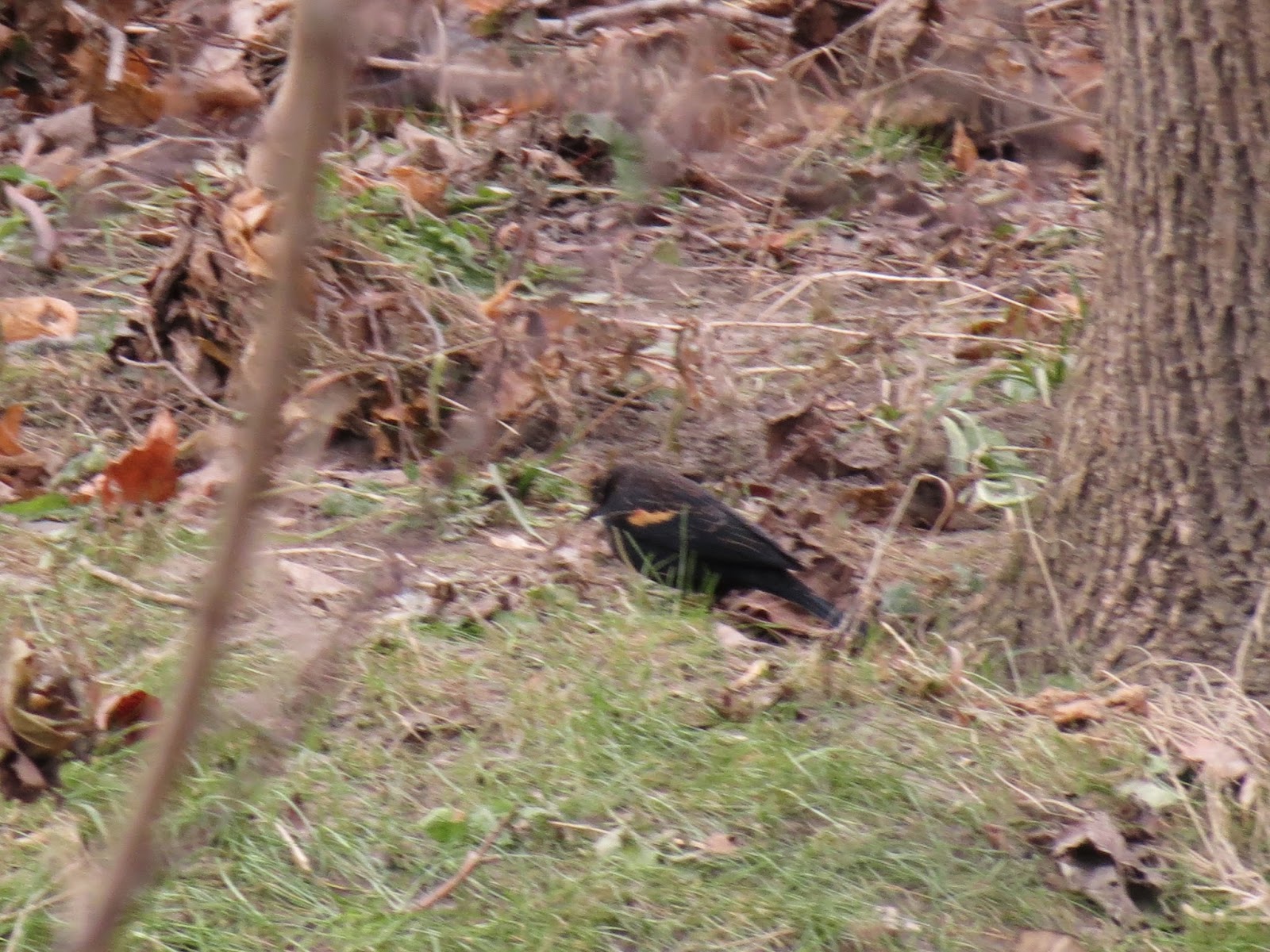 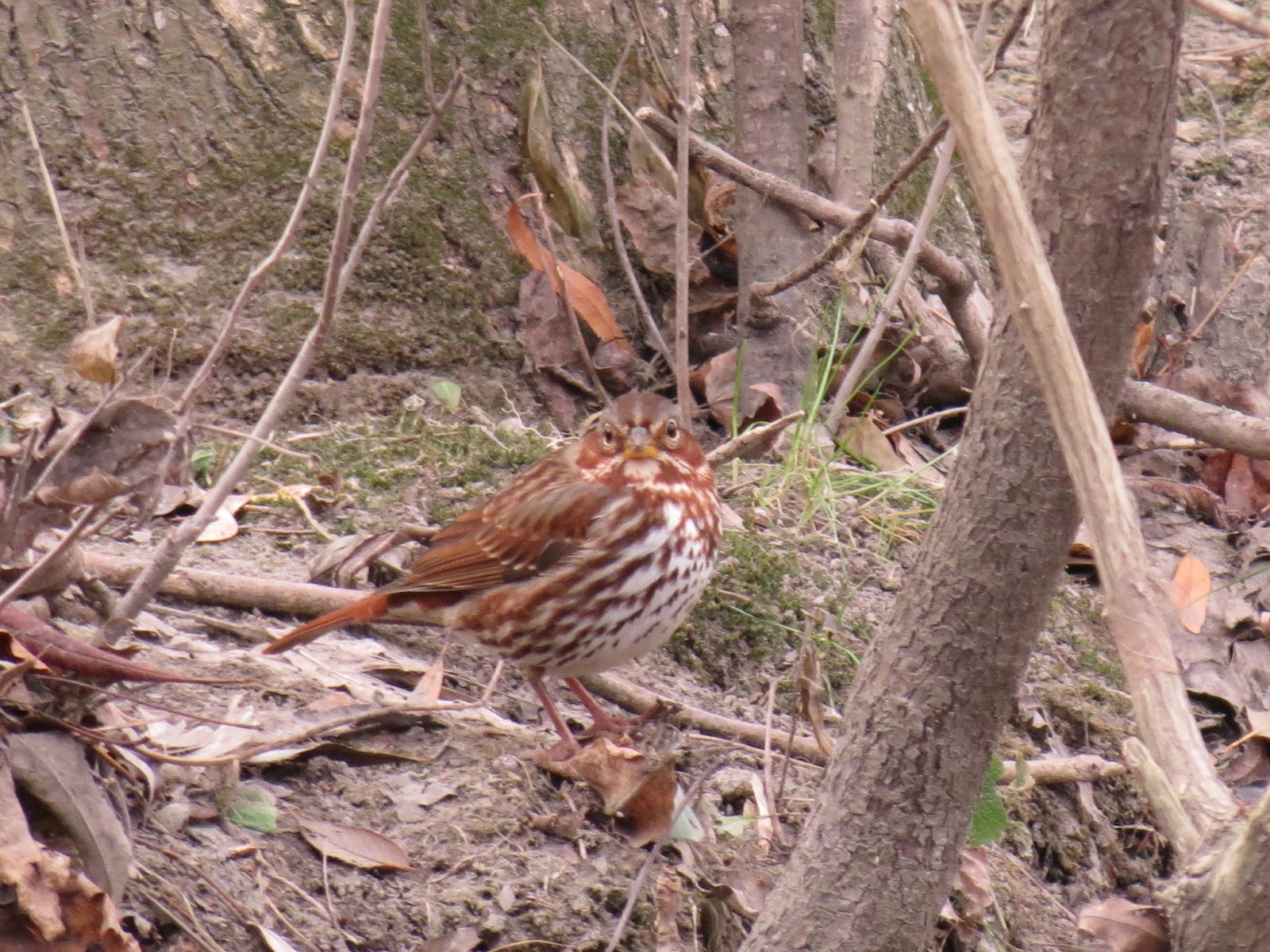 I came across this goose with what appears to be a radio transmitter around its neck. Please let me know if you know anything more about this! 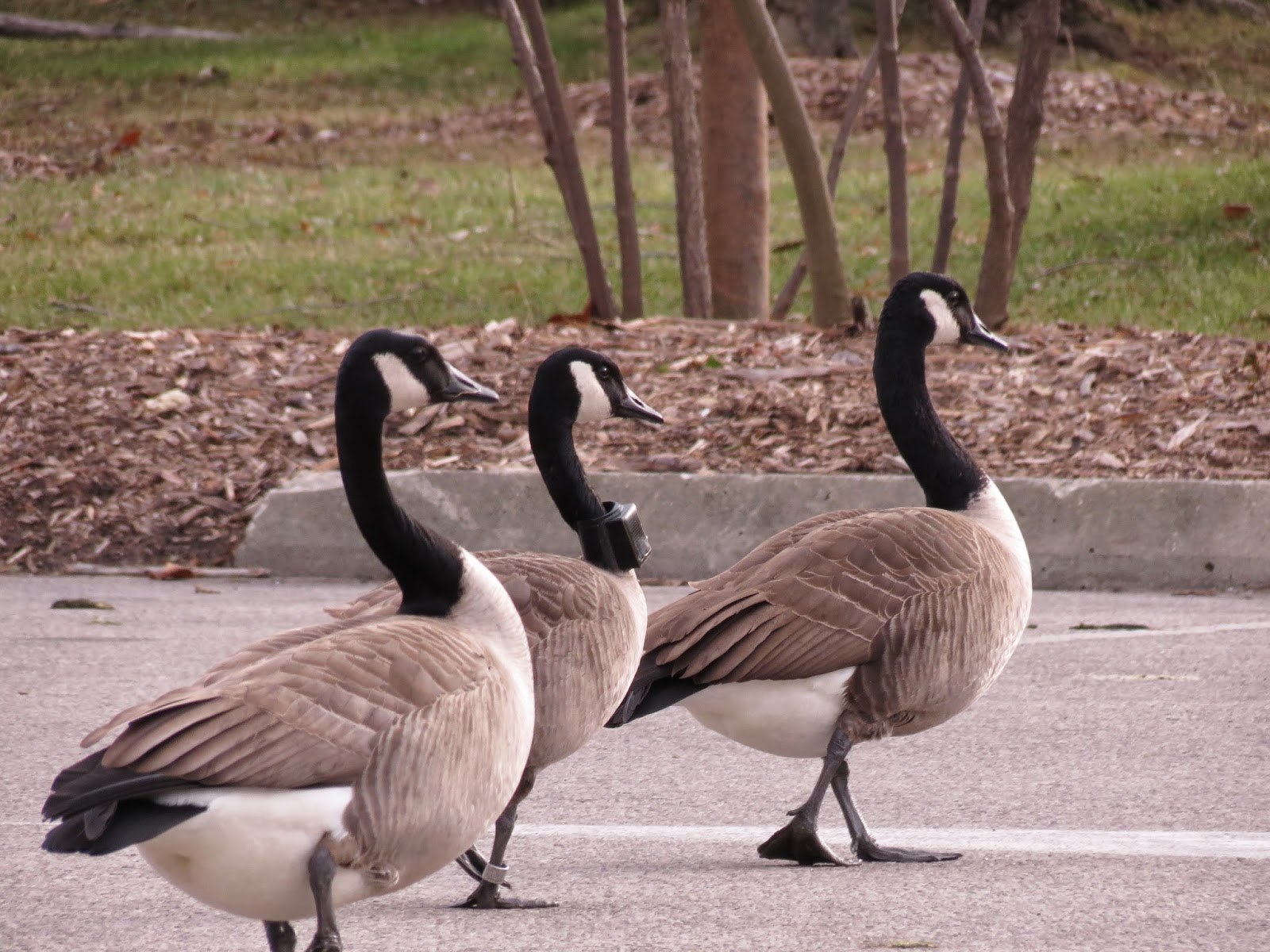 This Purple Sandpiper was found at Lakefront Promenade Park in Mississauga one morning. I've only seen this species extremely distantly before, so it was great to watch this incredibly chubby little bird foraging in the algae. 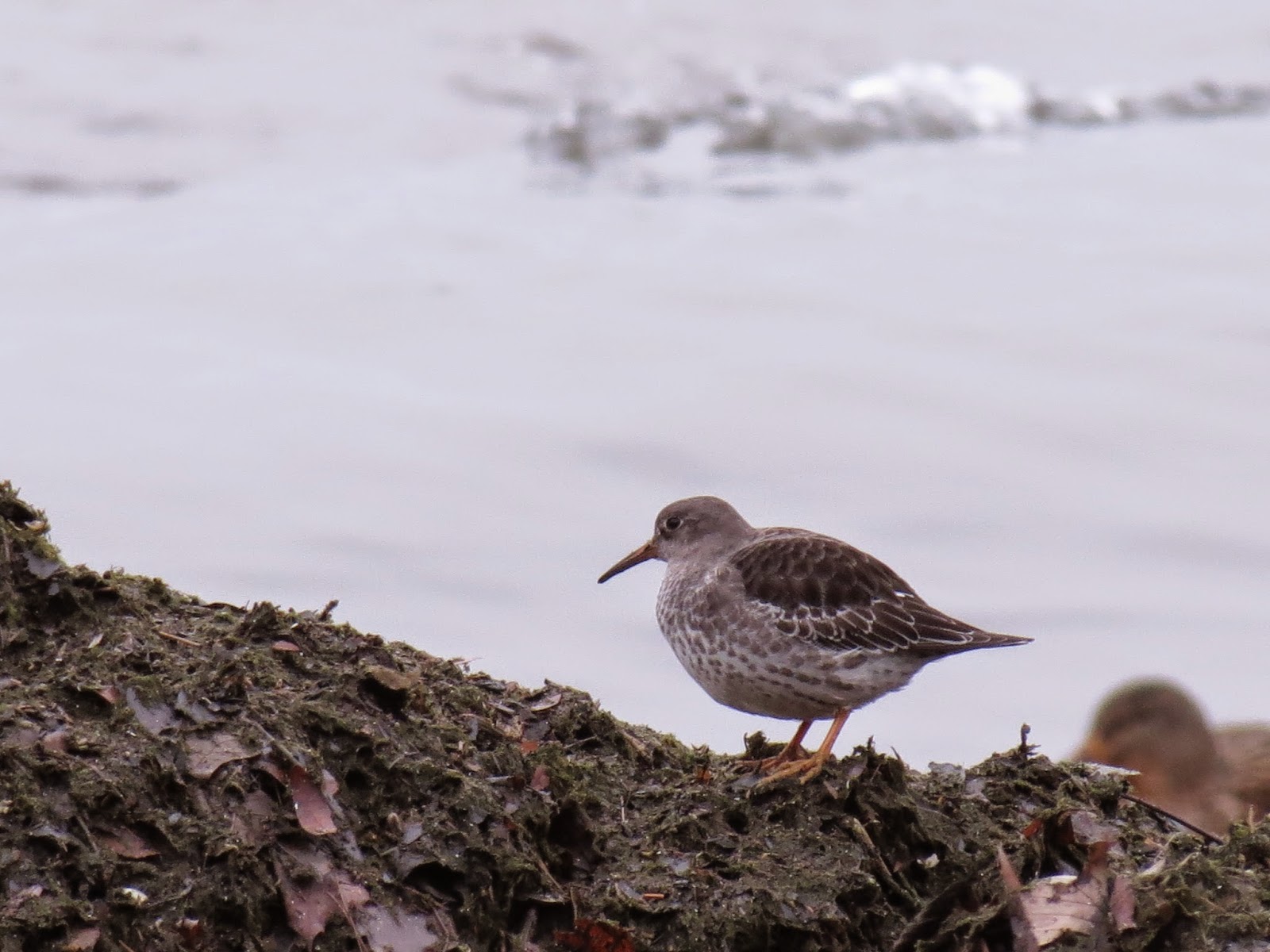 Northern Saw-whet Owls probably winter fairly commonly, but are very hard to find due to their tiny size. Winter is generally the time to see owls in Southern Ontario, and indeed I've had 4 species in the last month. 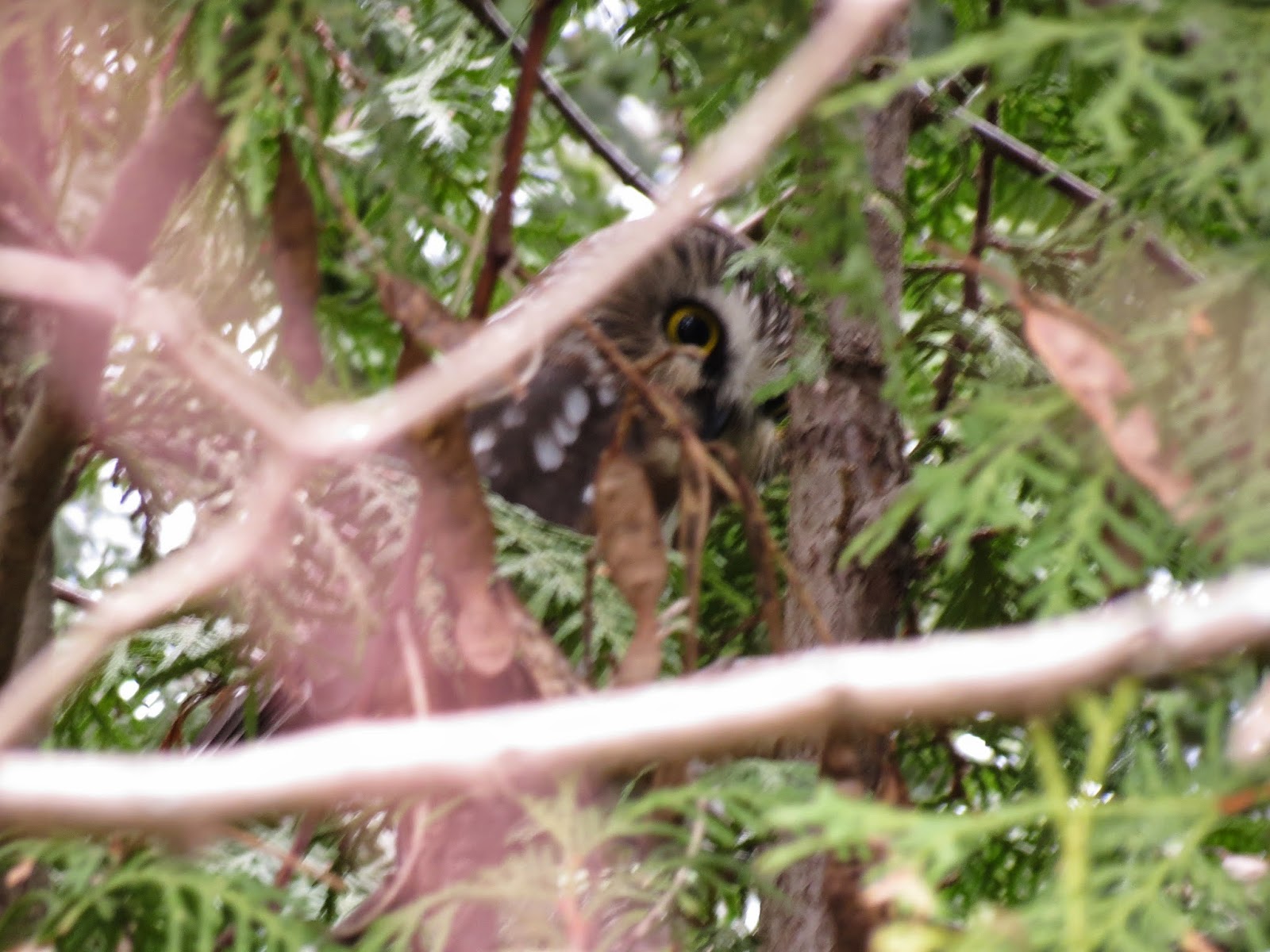 December is one of my favorite times for birding in Ontario, although some years are much better than others. I've spent lots of time birding around Etobicoke, Mississauga and Oakville, and this is certainly one of the better Decembers!

A Painted Bunting showed up in a residential neighborhood in Oakville recently and has been seen by many, but we couldn't find it in a brief visit. However, my first White-winged Crossbill in over a year was an excellent surprise! As usual for this species, it was very tame but unobtrusive, and we only noticed it because it landed in the middle of the road. 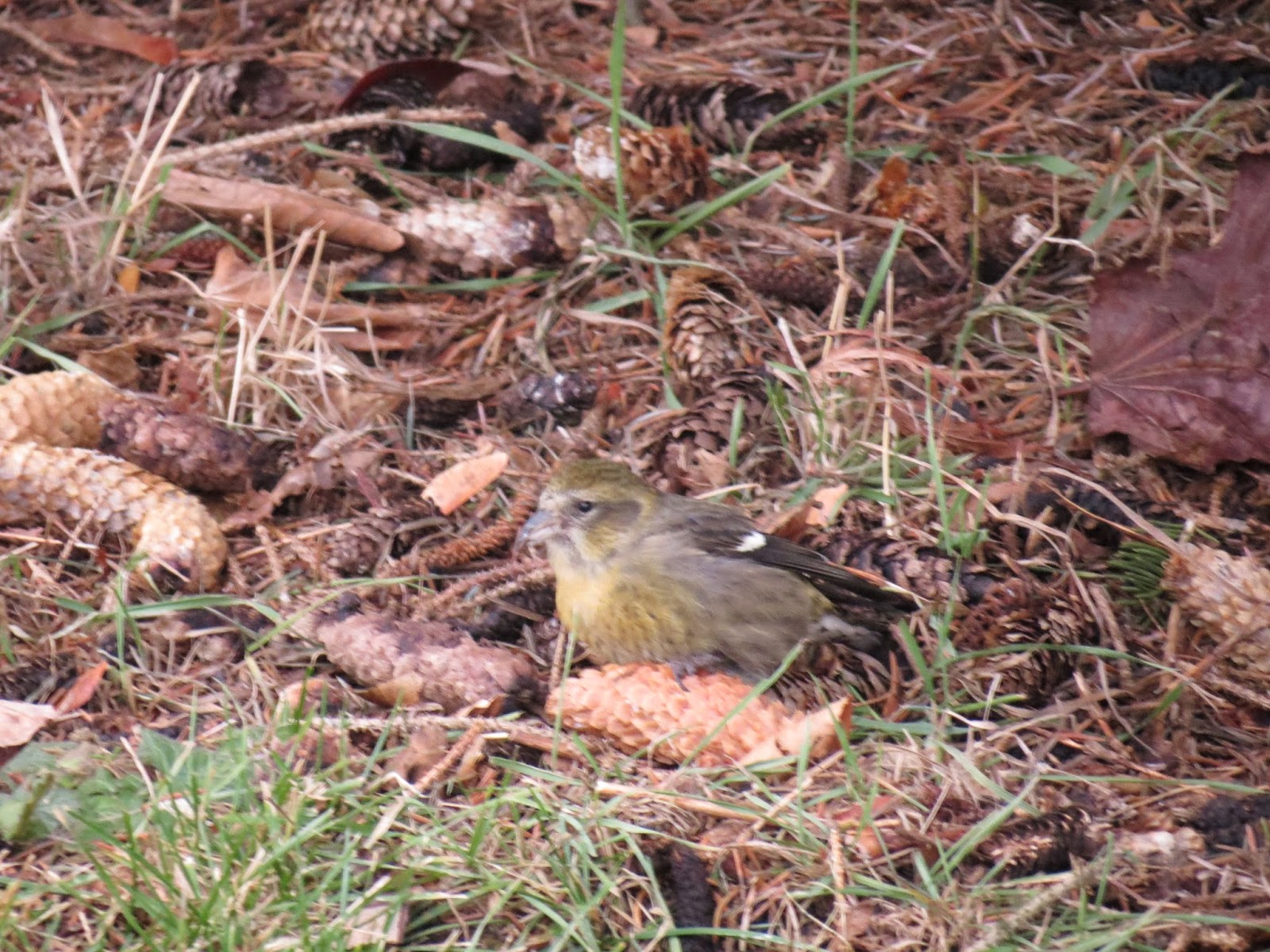 I don't think I'm going to go look for the bunting again. Wandering around a neighborhood for a few hours isn't really my idea of a good time!

I had this Long-eared Owl in my usual spot last week. Hopefully it will stick around, but I've never had one here for the whole winter. To find this species, look in dense conifer trees adjacent to open grassy areas. The strangest thing for me recently has been the number of Orange-crowned Warblers around. Most are along the lake, but the bird below was in a brushy field a few kilometres inland. Not sure what it could possibly be finding to eat! I've had a total of five birds in different spots. Most years I won't see any after October! 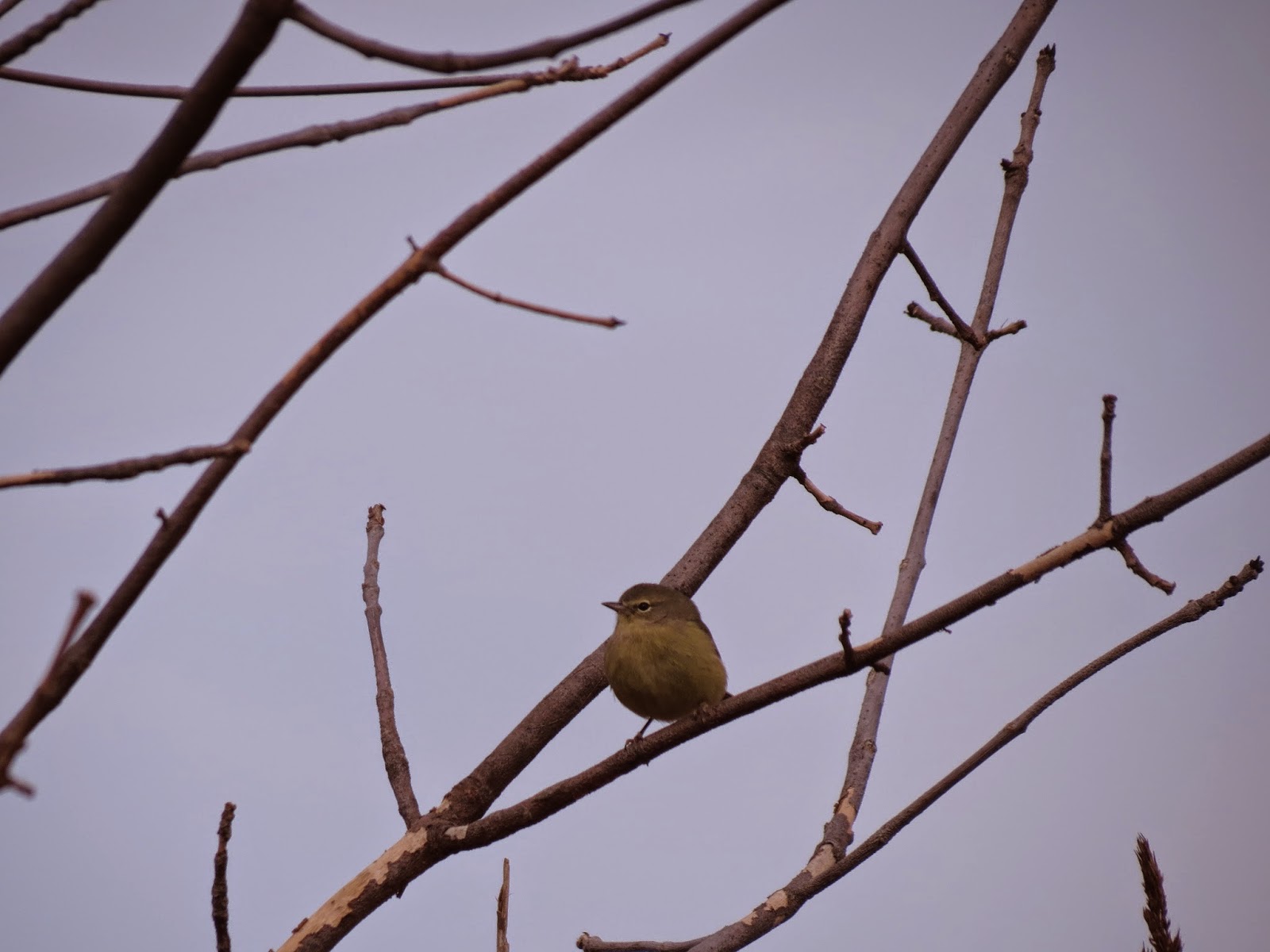 It is turning into another fantastic winter for Snowy Owls. This one was very far away, but I got much closer views of some this weekend, so stay tuned for an upcoming post.  I'm not sure why we're getting two huge invasions in a row, but this winter's birds may be returning from last winter. 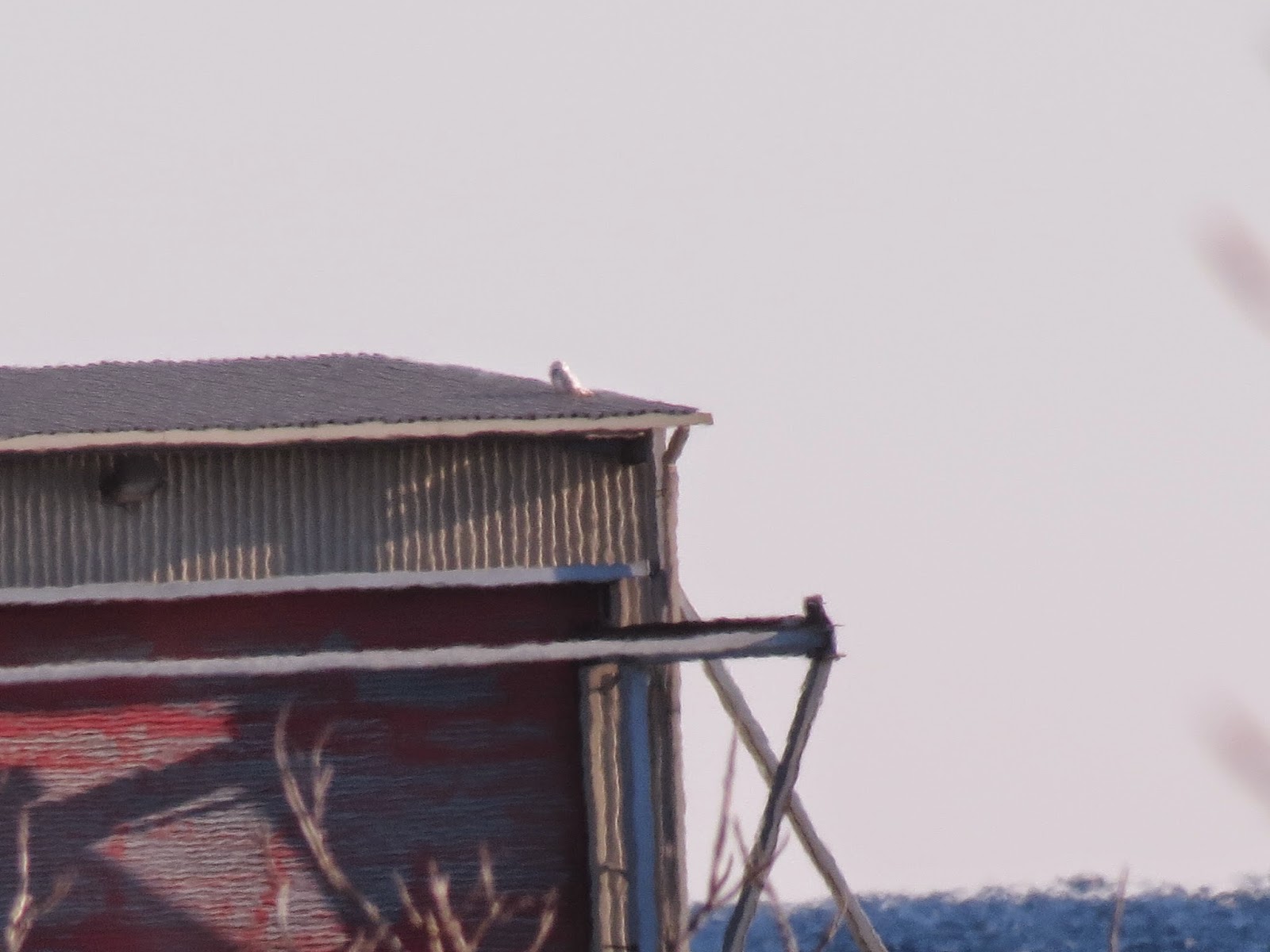 Winter is the best time to see gulls locally as Arctic breeders move south, and I've had a nice variety at Lakefront Promenade Park in Mississauga. This one is an immature Glaucous Gull (the huge pale one with the bicolored beak). 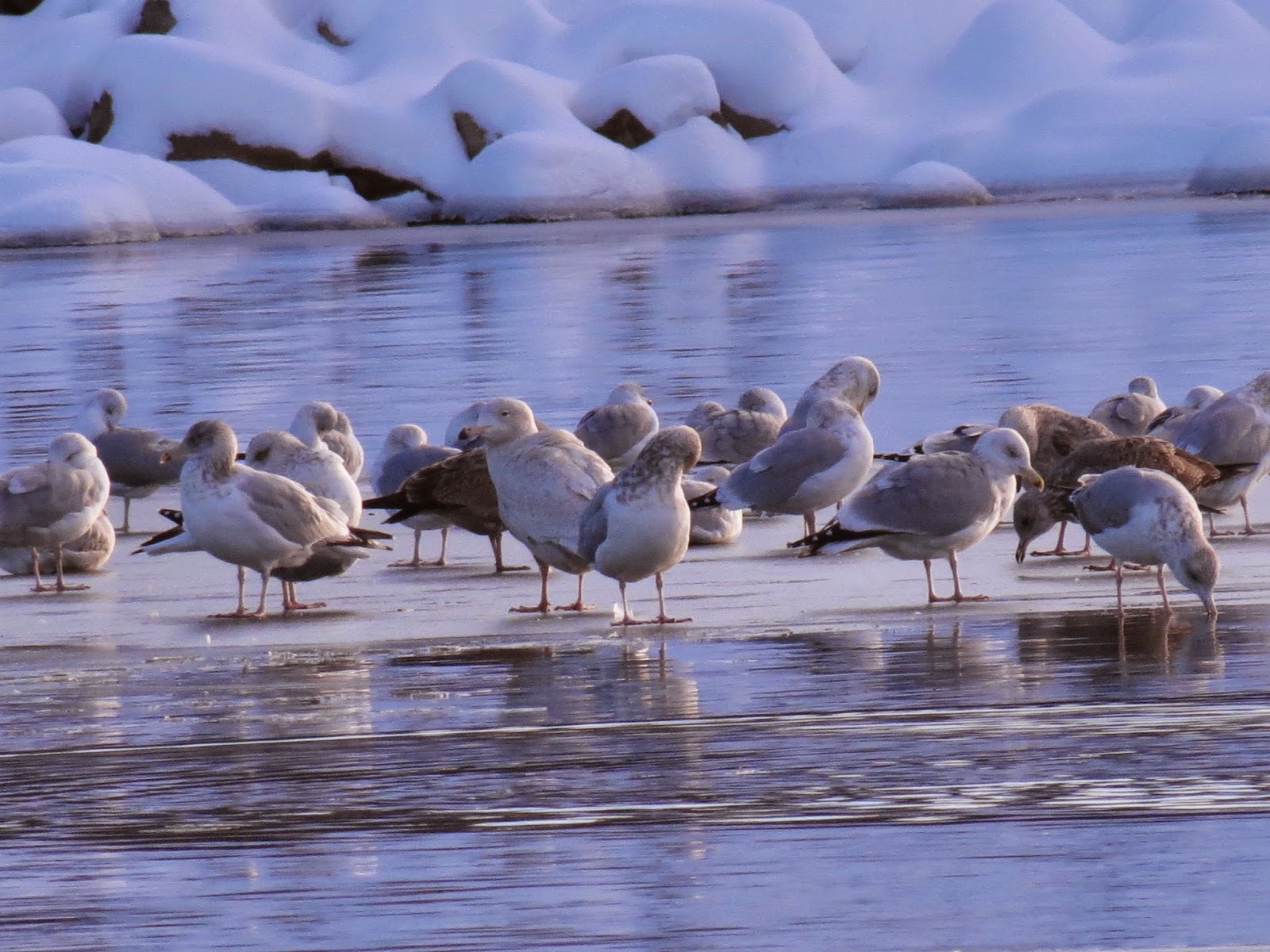 Iceland Gull is vaguely similar to Glaucous but is usually much smaller and daintier. This immature and adult (next picture) were only a few metres apart. 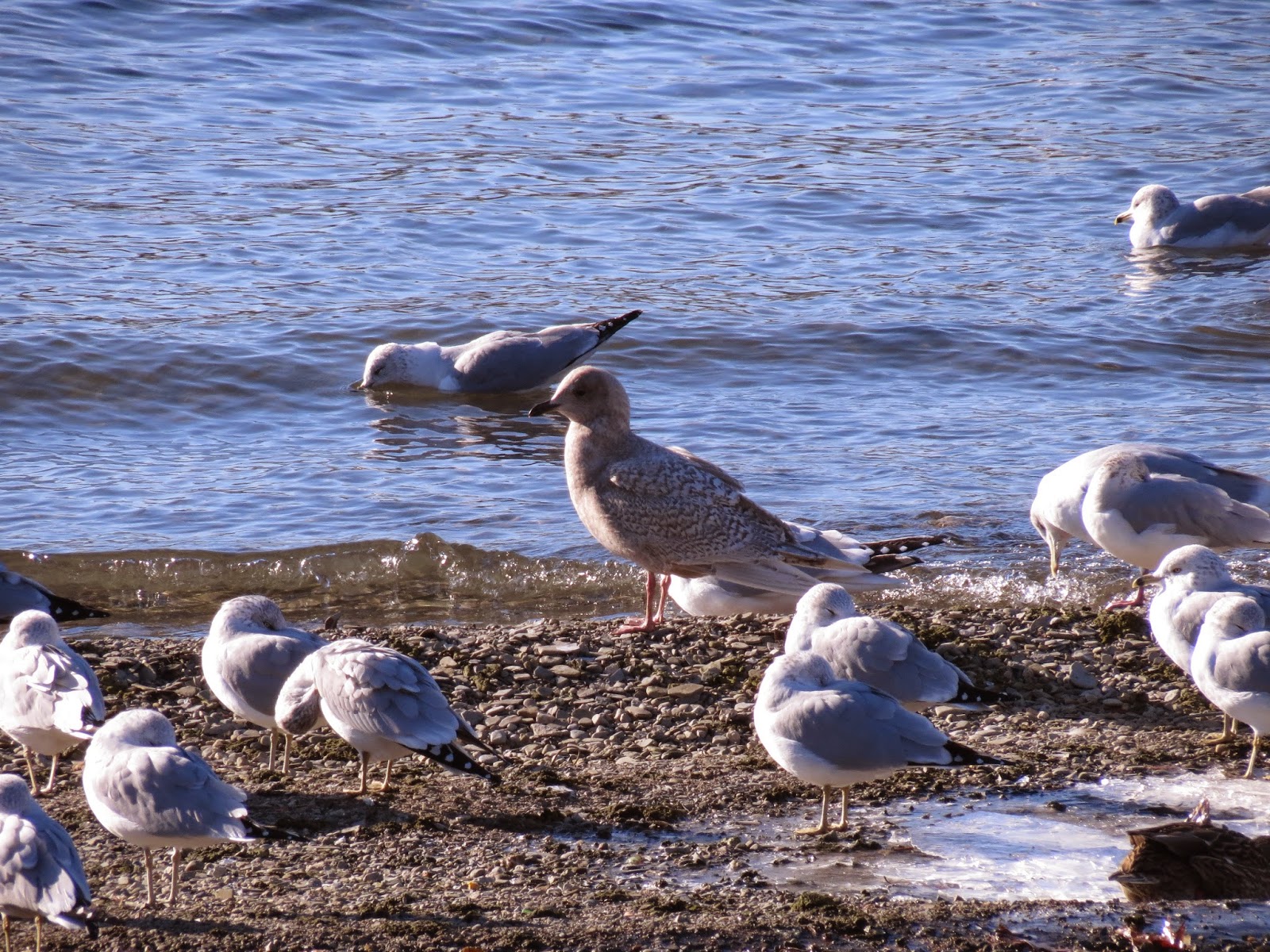 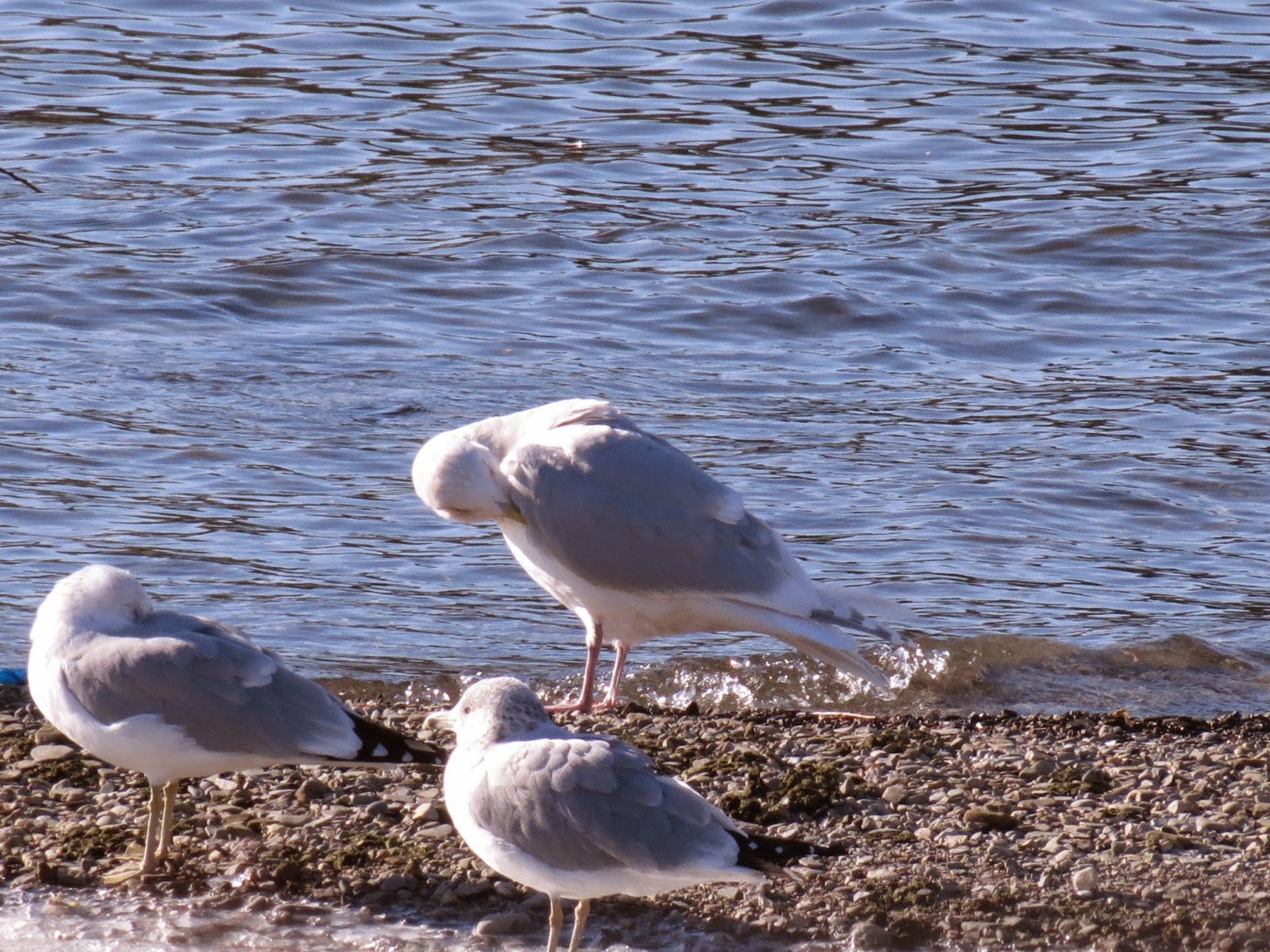 The crown jewel was this immature (first winter) Thayer's Gull. Breeding in the western Arctic, Thayer's are uncommon to rare on Lake Ontario, and I only see a couple each winter. A very attractive looking gull in its juvenile plumage, while the Herring Gulls of the same age have already molted into a messier looking plumage. 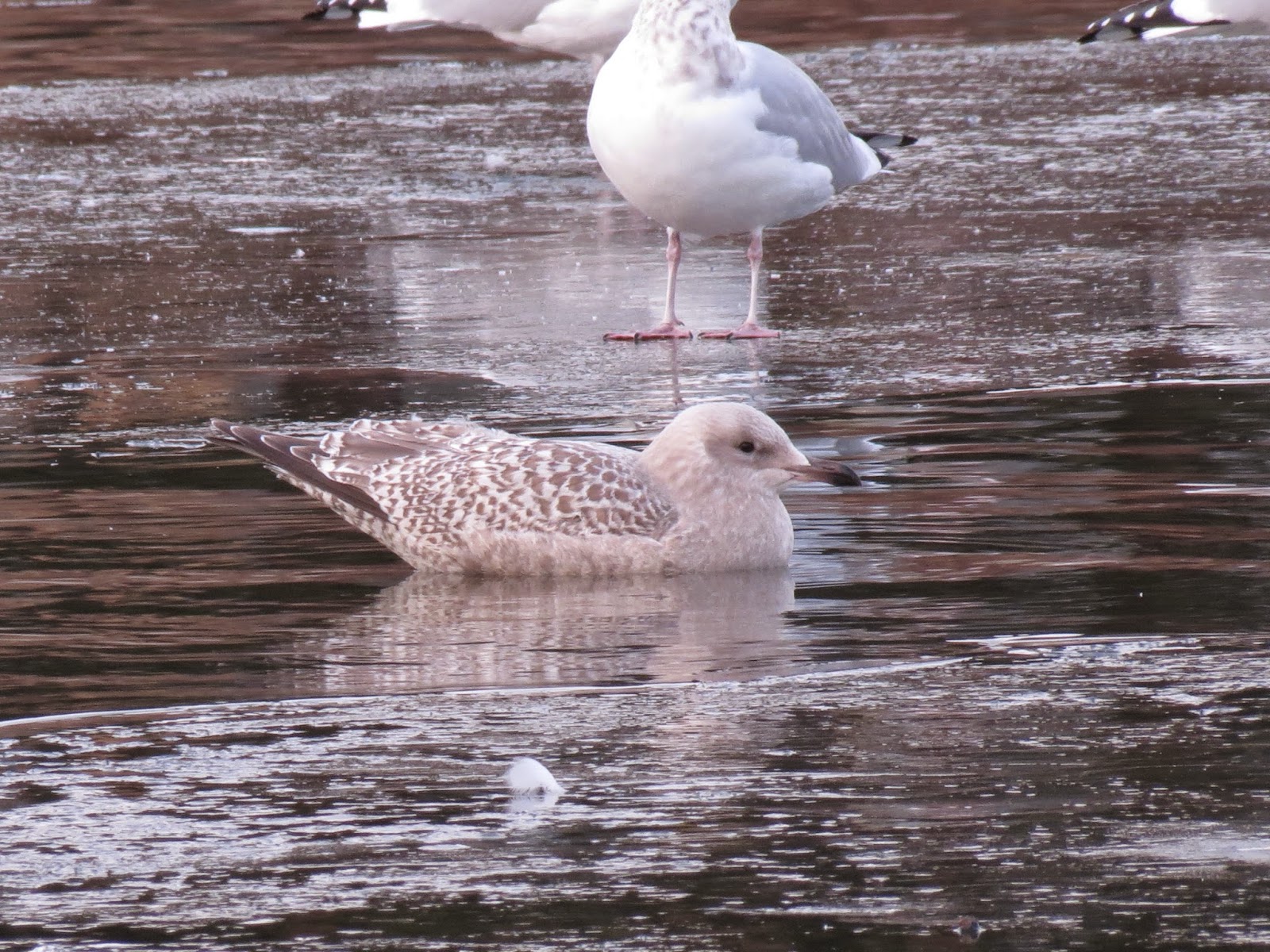 This Ring-necked Duck at the same location is a very good bird for Mississauga in December, and not surprisingly has since left. This species is mostly found on smaller ponds and lakes, so must go far enough south that these areas won't freeze. 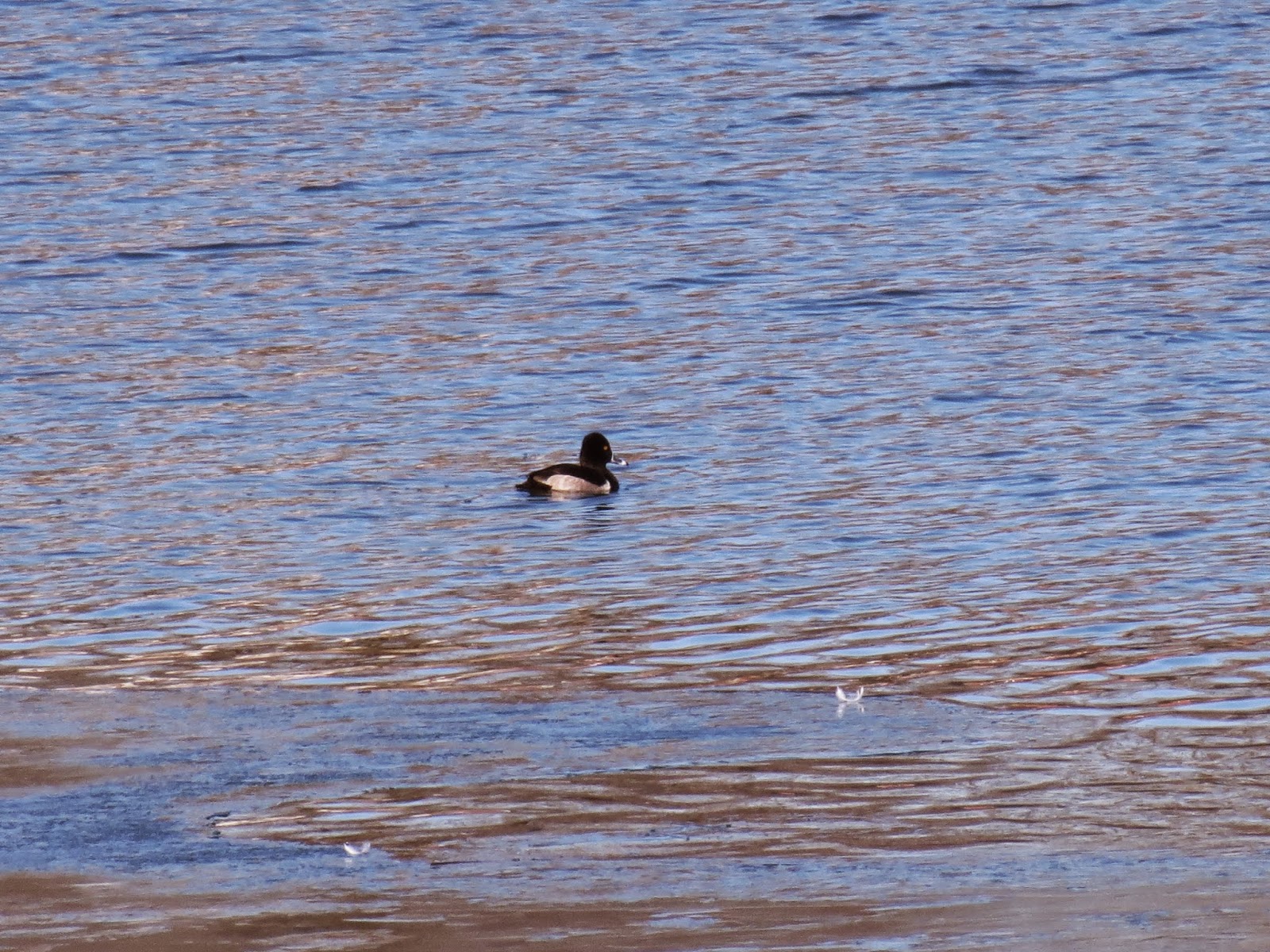 There's lots more to add but this post is getting a bit long so I'll add some more soon.
Posted by Reuven Martin at 9:51 PM No comments:

I've posted about this bird before, but only recently decided to actually submit the code and see for myself the origin of the bird. 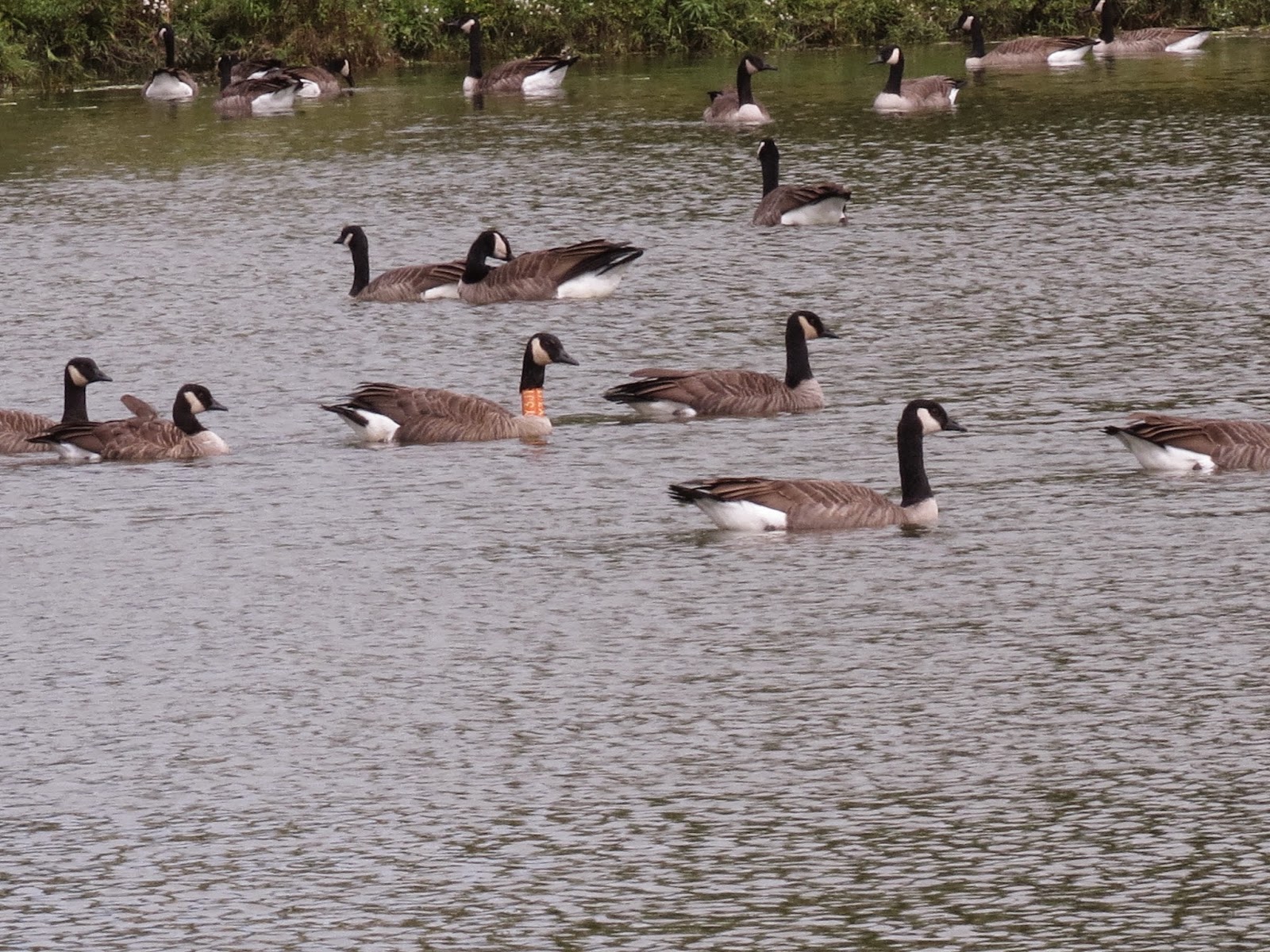 He returns to Guelph each winter, and I and others have seen him at pretty much every spot geese gather in the city. 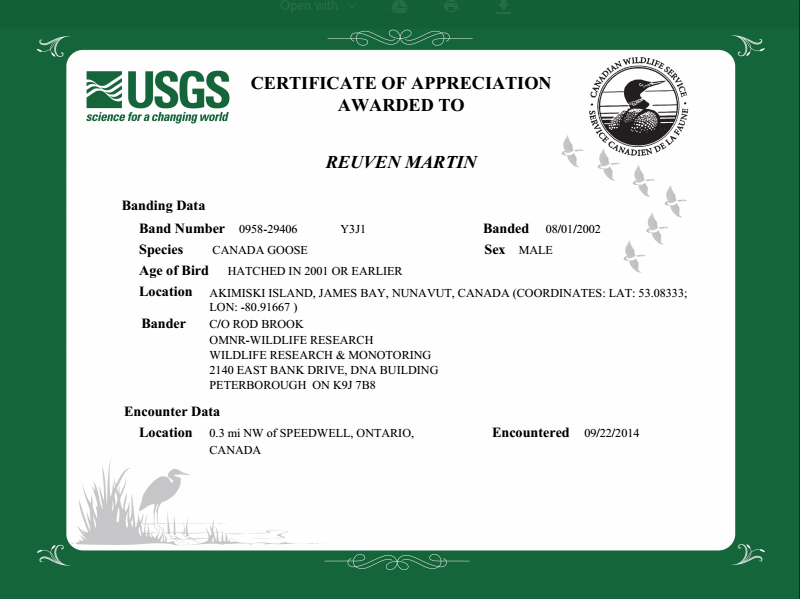 This morning Rohan van Twest discovered a Bohemian Waxwing feeding with a flock of Cedar Waxwings on the University of Guelph campus, and as I hadn't seen one since March 2013 I immediately walked over and easily saw it. This species is a very irregular visitor this far south, although they sometimes arrive in numbers. There was a large invasion in winter 2012-2013 and I had a maximum of 260 in a single flock in the arboretum. 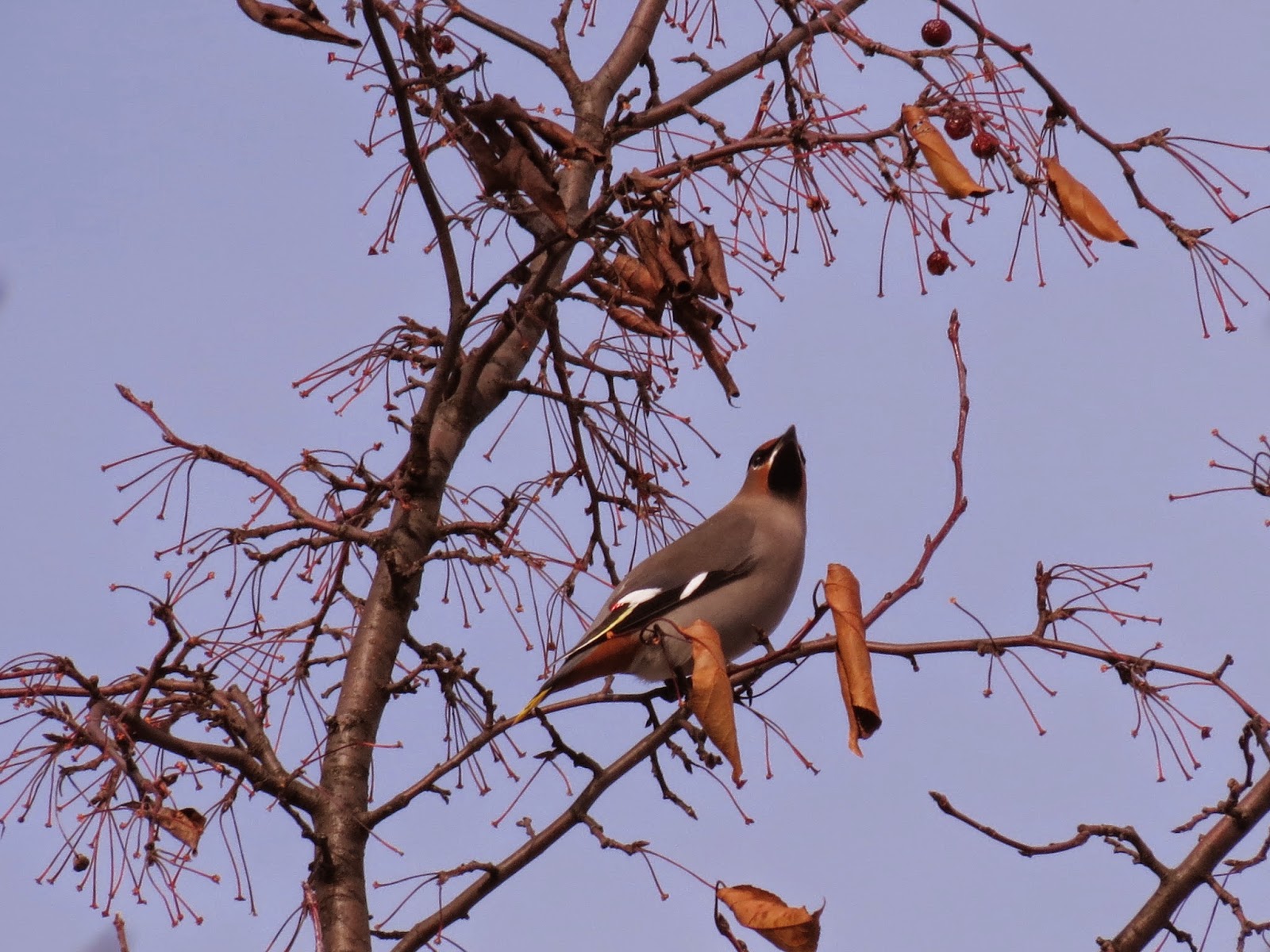 Note the grey belly, reddish undertail and white markings on the wings. Bohemians are also much larger than Cedar Waxwings. 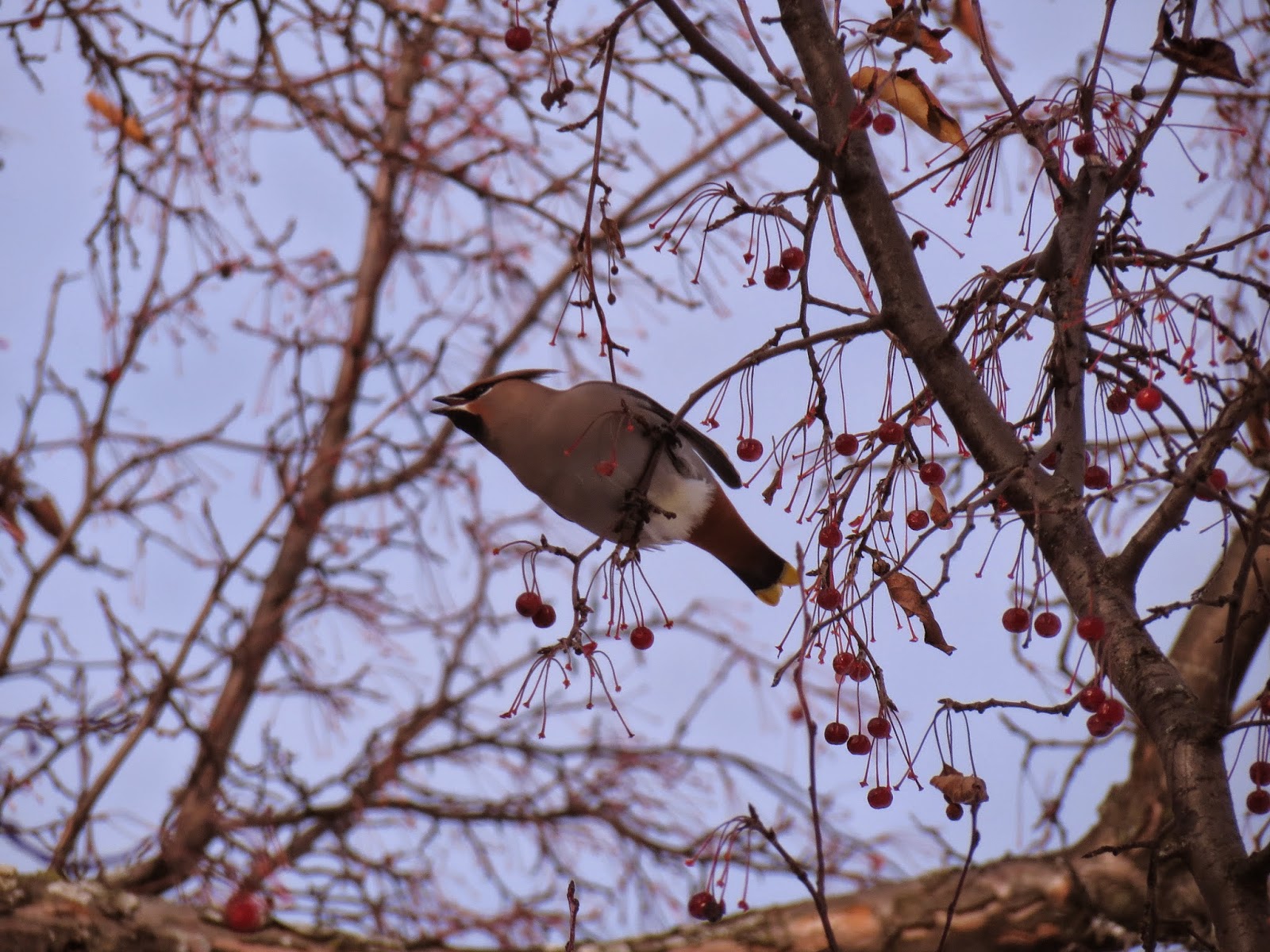 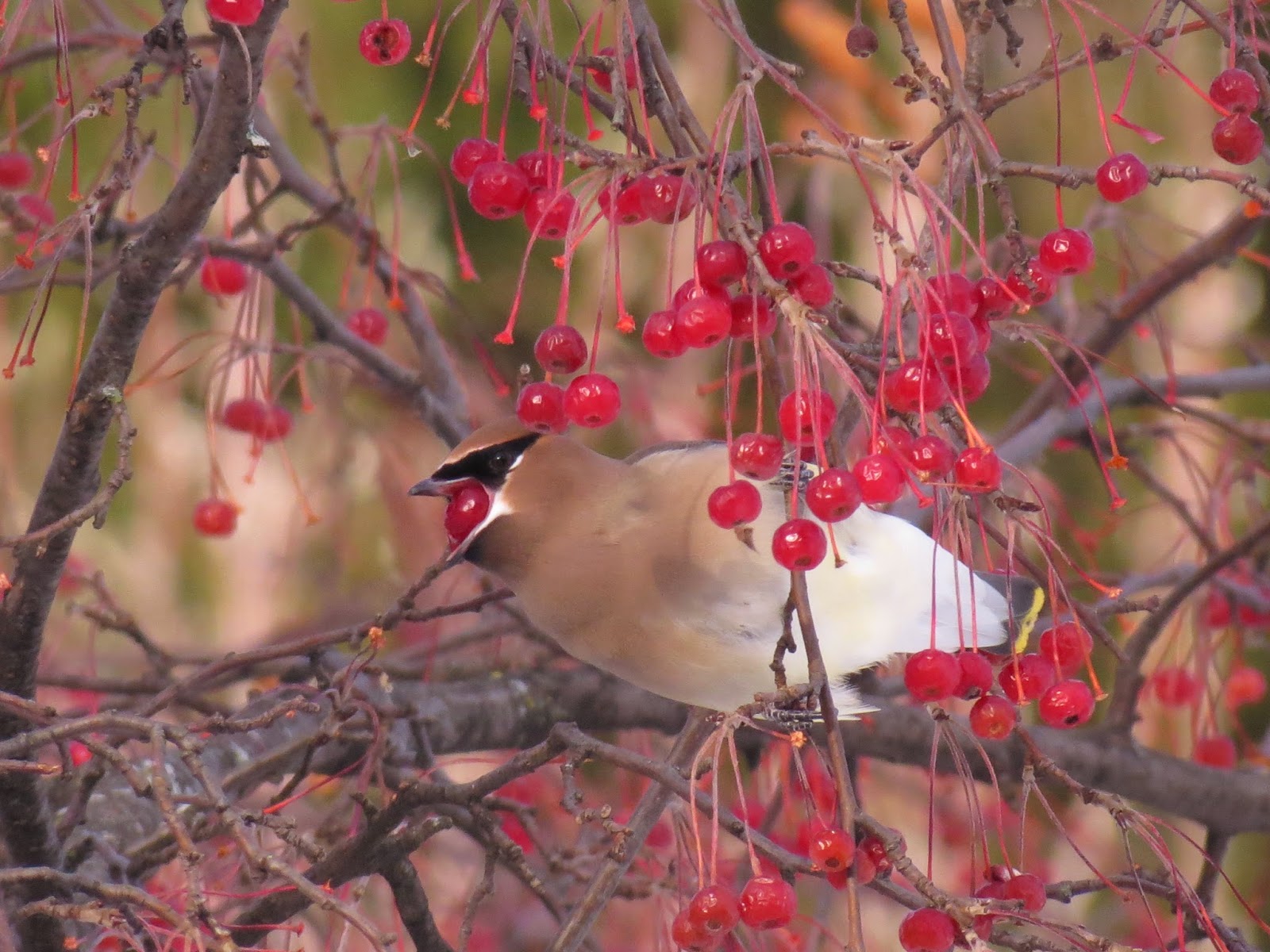 Although Cedar Waxwings are not quite as tame as Bohemians, they often still offer very good looks well pigging out on berries. 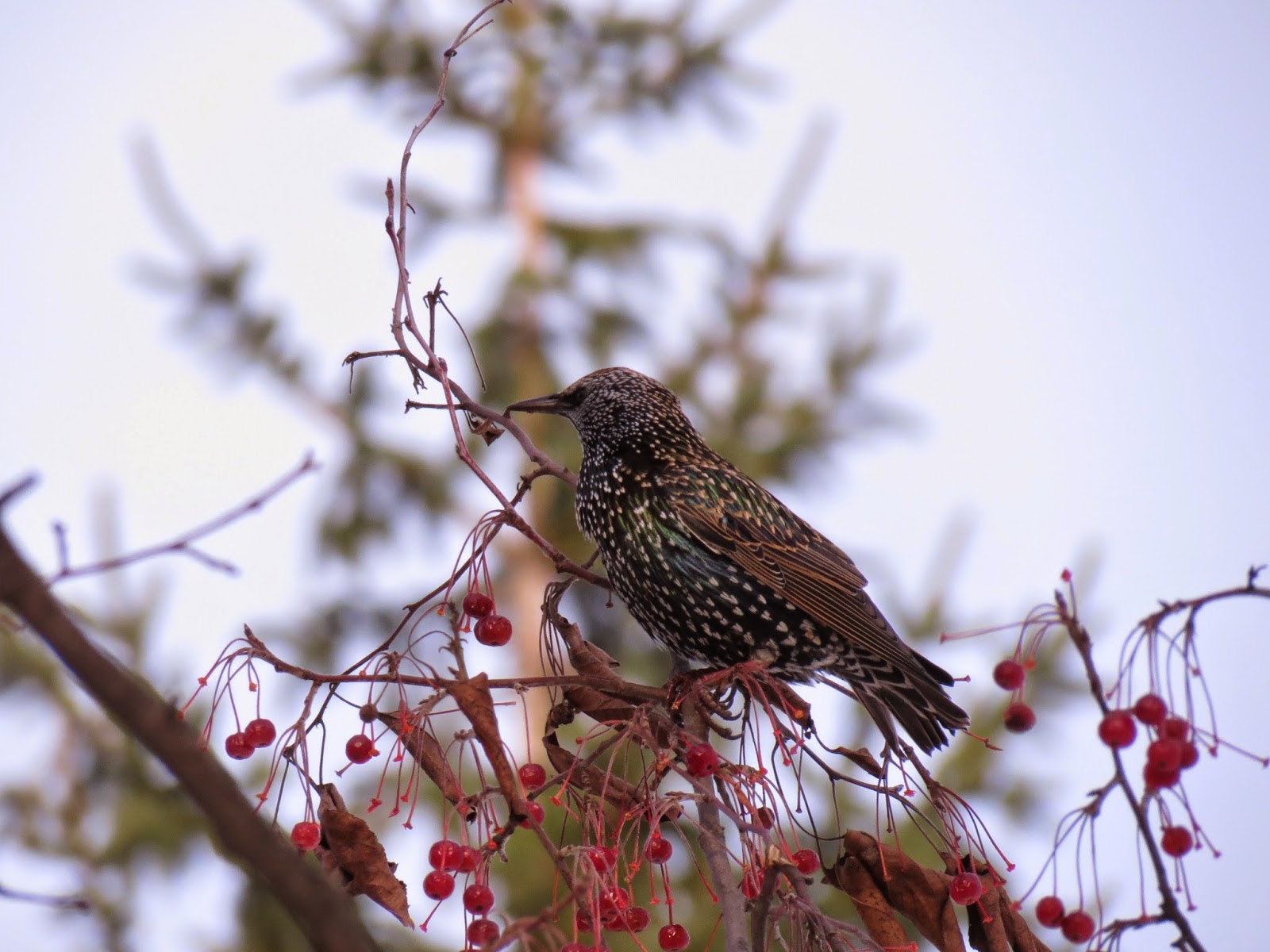 Several European Starlings were mixed in, looking very spiffy in their fresh winter plumage. These buffy tips will wear off, allowing the bird to completely change its appearance for the spring without having to molt. 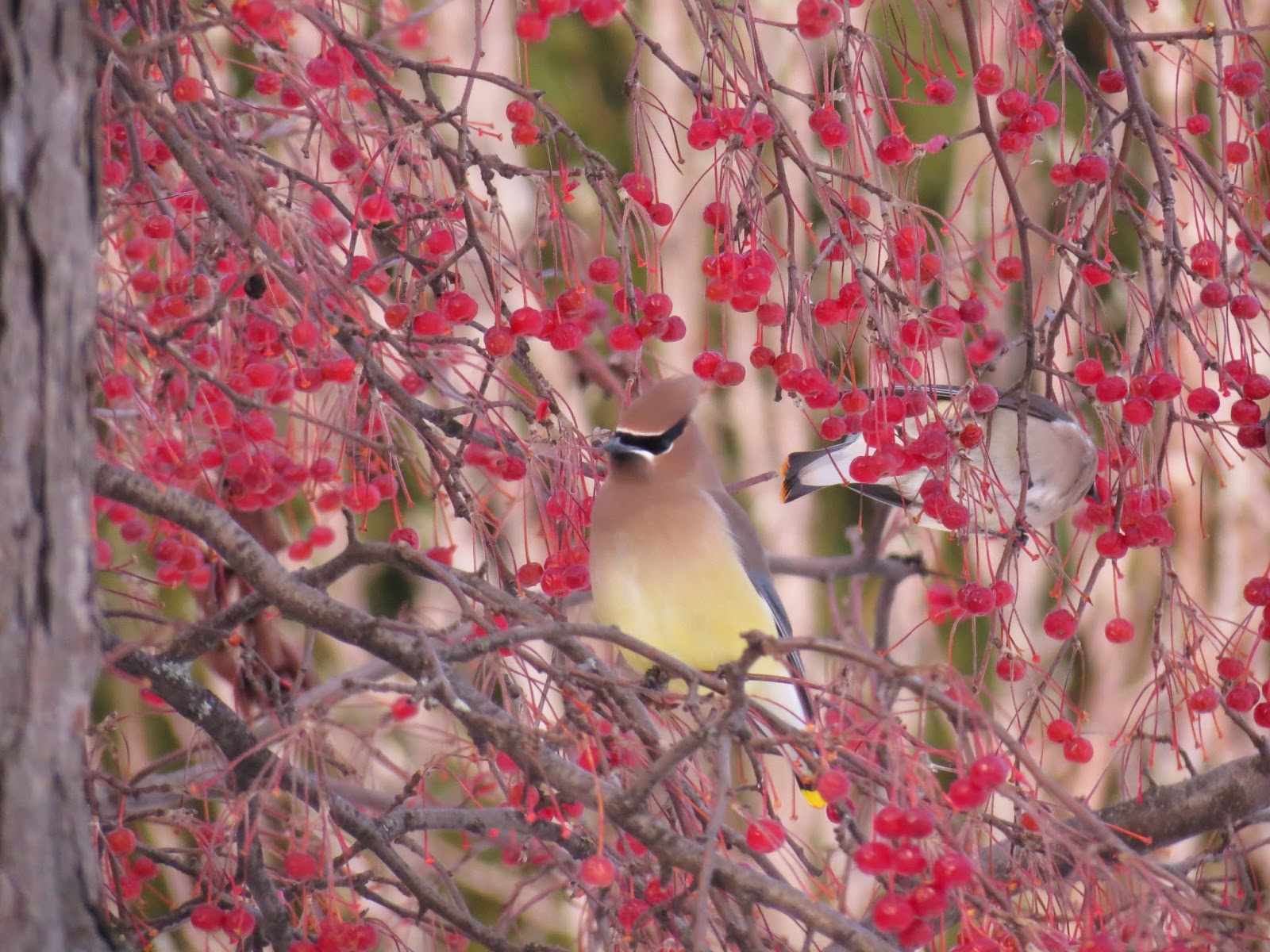 Cedar Waxwings sometimes have tails tipped in orange rather than red, as seen on the bird in the background here. This a result of diets high in certain berries, and seems to be more common in Guelph than most places. 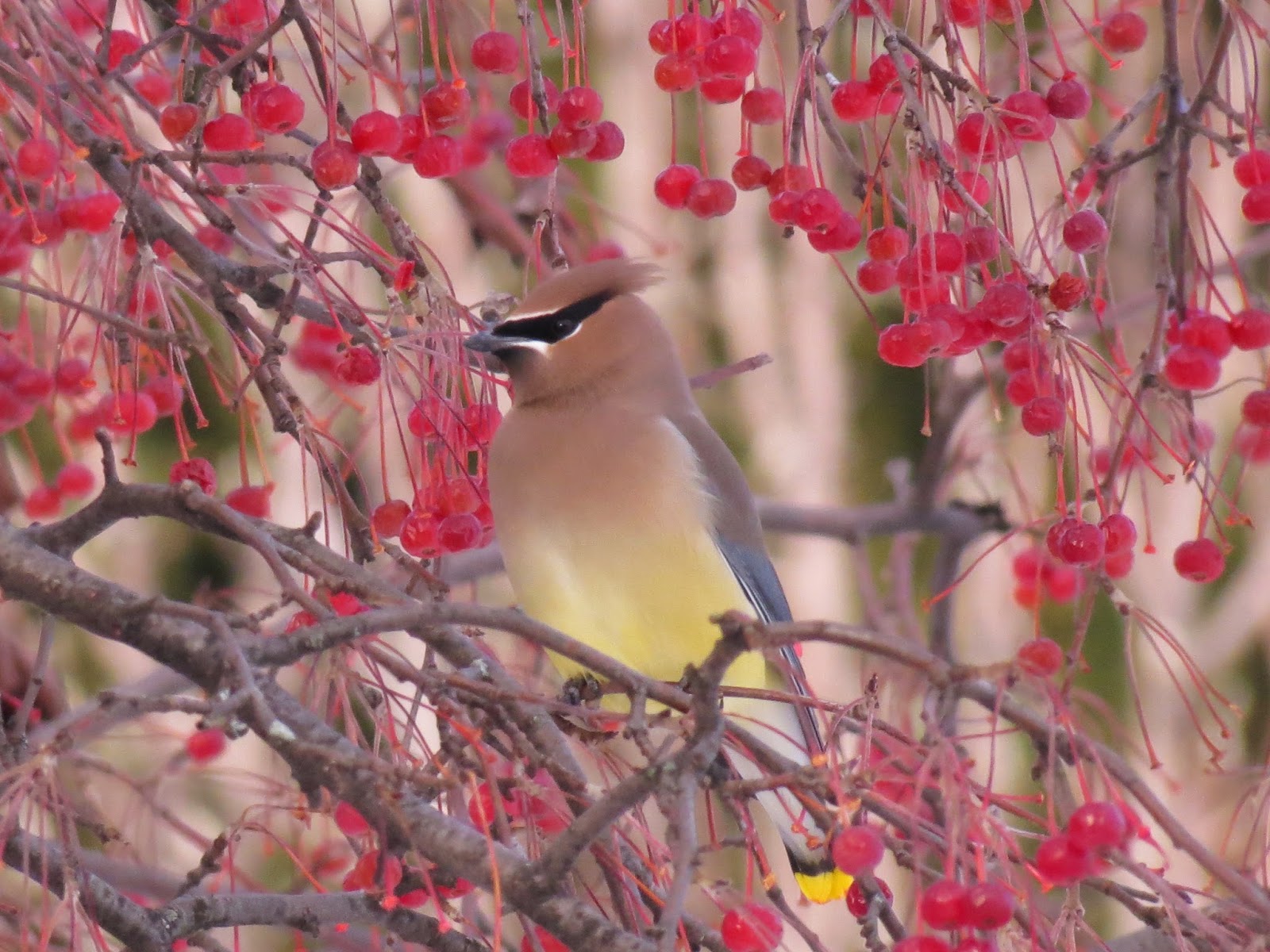 Cedar Waxwings have an interesting annual cycle locally. Many birds winter, but numbers seem to dwindle into the spring. A large wave of migrants arrives very late around the middle of May or so, and the species is abundant through the summer and fall. Most of our species that overwinter being migrating north much earlier (March or April). 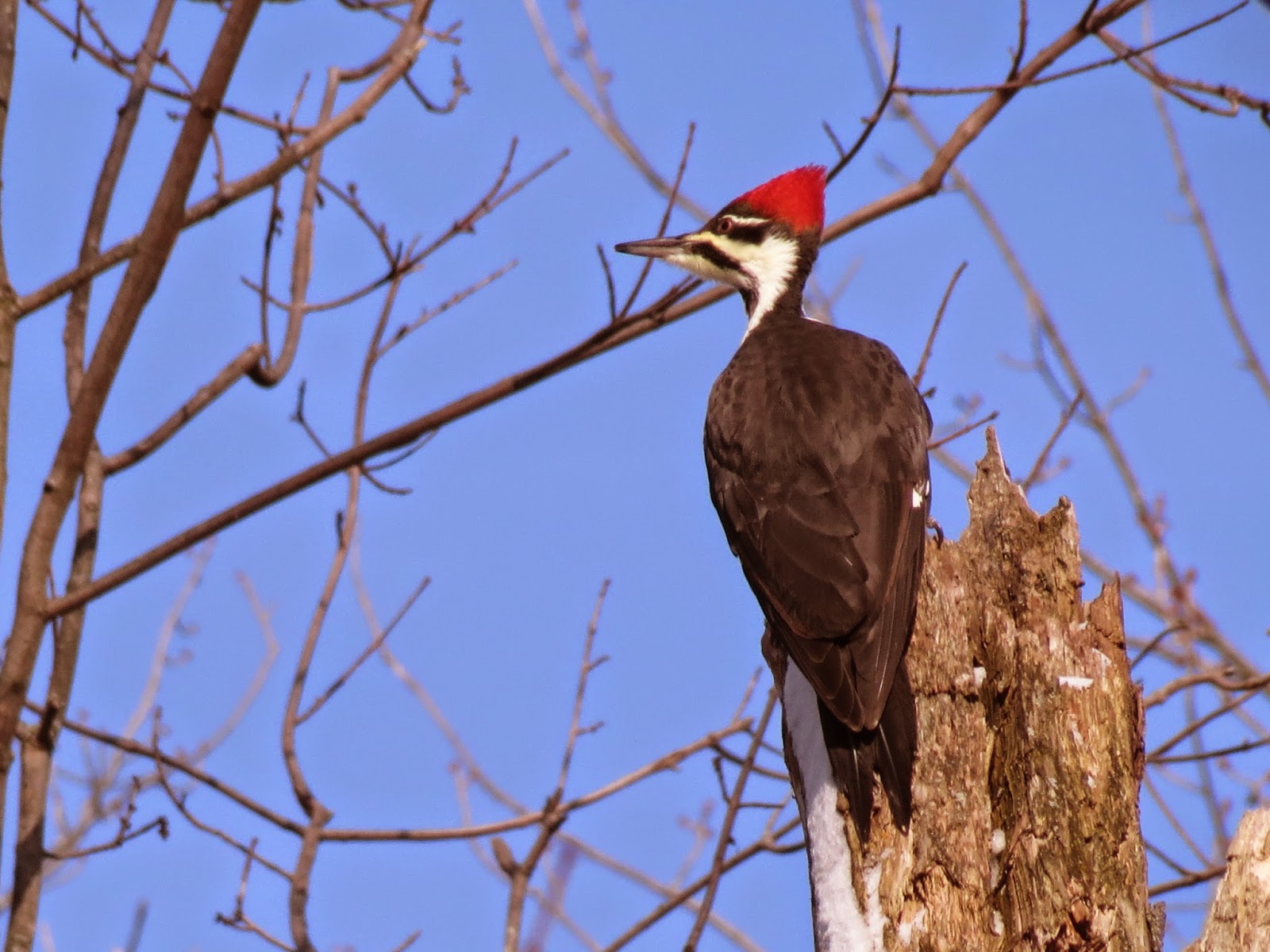 Although they are now fairly common in cities, Pileated Woodpeckers were once restricted to pristine woodlands and were almost absent from much of Southern Ontario. The story is similar for Common Ravens which now also seem to be returning en masse. Fox Sparrows seem to be lingering quite late all over Ontario this winter, such as this bird visiting feeders in the arboretum. 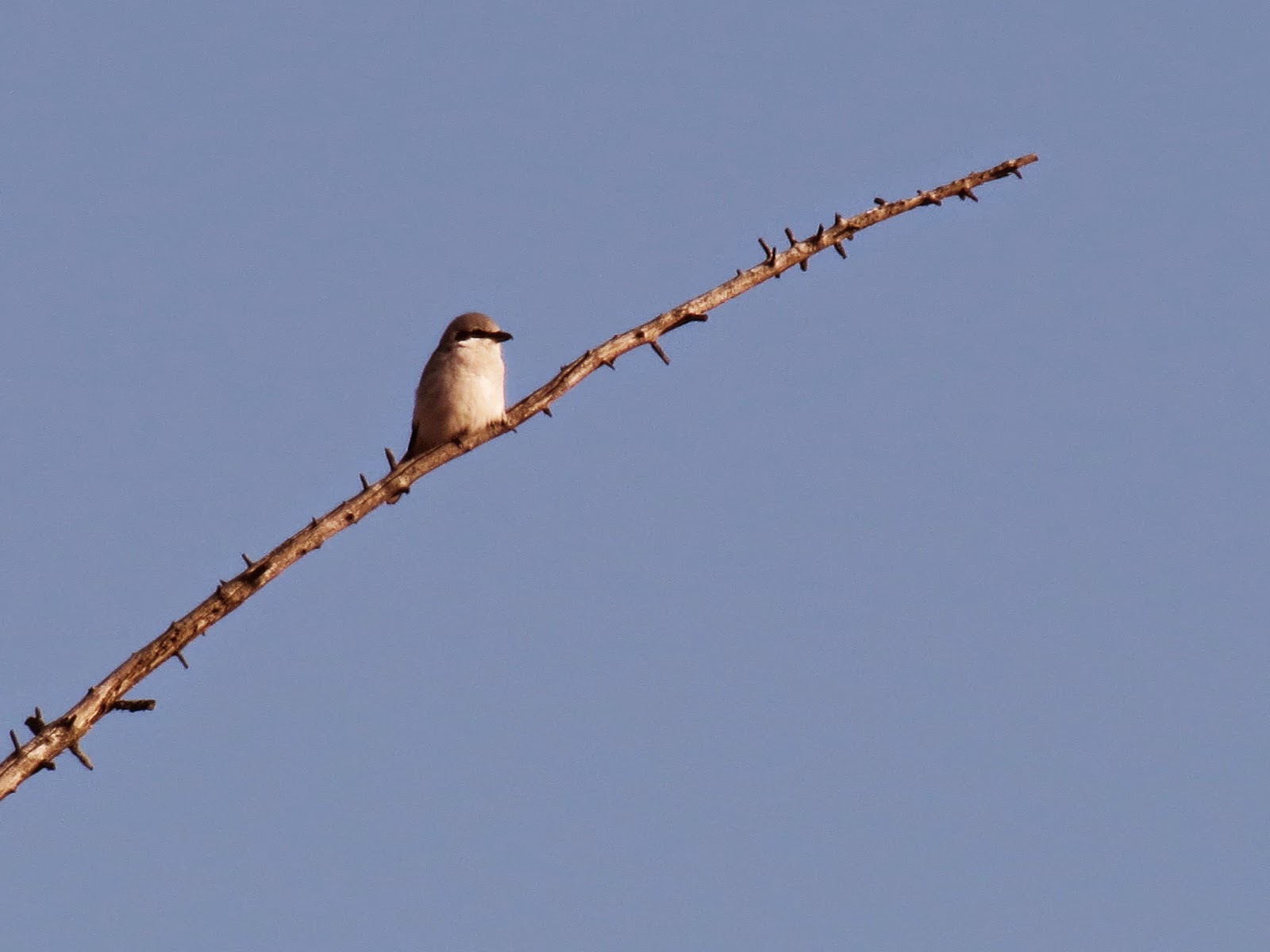 The local Northern Shrike was showing off this afternoon. This is the same tree and most likely the same bird as one of my very first posts to this blog!

Overall an excellent haul for a day which I mostly spent inside studying! My last exam is tomorrow morning, and I intend to spend lots of time outside over the next little while.
Posted by Reuven Martin at 9:28 PM 1 comment: