I haven't been getting out as much as I like recently due to school, but November is often an excellent time to look for birds and I've seen a few cool things recently. 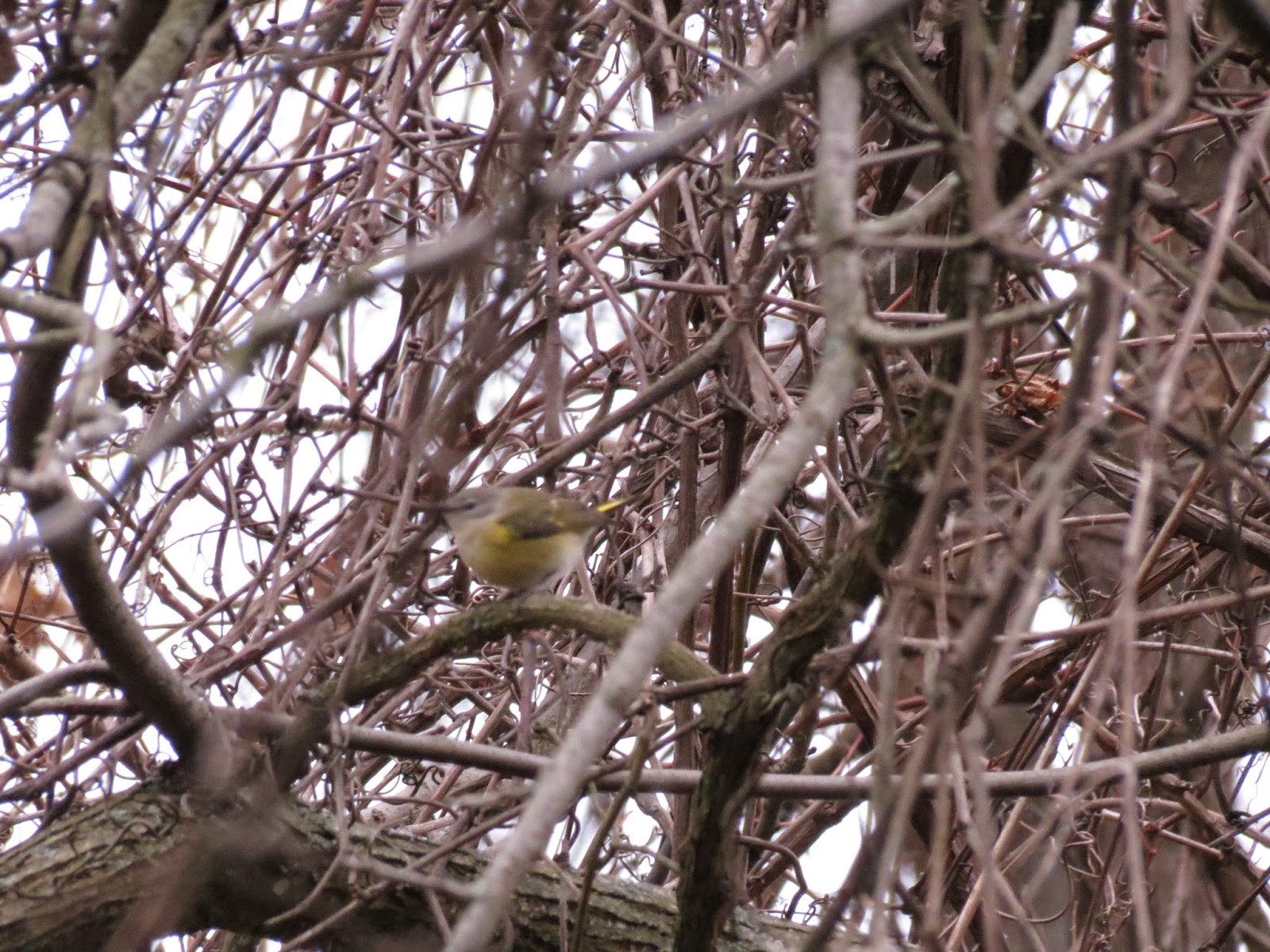 This extremely late American Redstart was at a sewage plant at Arkendo Park in Oakville mid-month. I'm not sure whether anyone has checked if it is still around since. At a similar location farther west in Oakville (Sedgewick Park) there is a vast array of warblers and other less hardy birds hanging on (Yellow-rumped, Nashville, Orange-crowned, Tennessee, Wilson's and Pine Warblers, Northern Parula, Ruby-crowned Kinglet, House Wren and White-crowned Sparrow have all been seen recently). Hopefully most stay (i.e. survive) until I can get over there and see them! Now is the time to check those sheltered spots with open water! 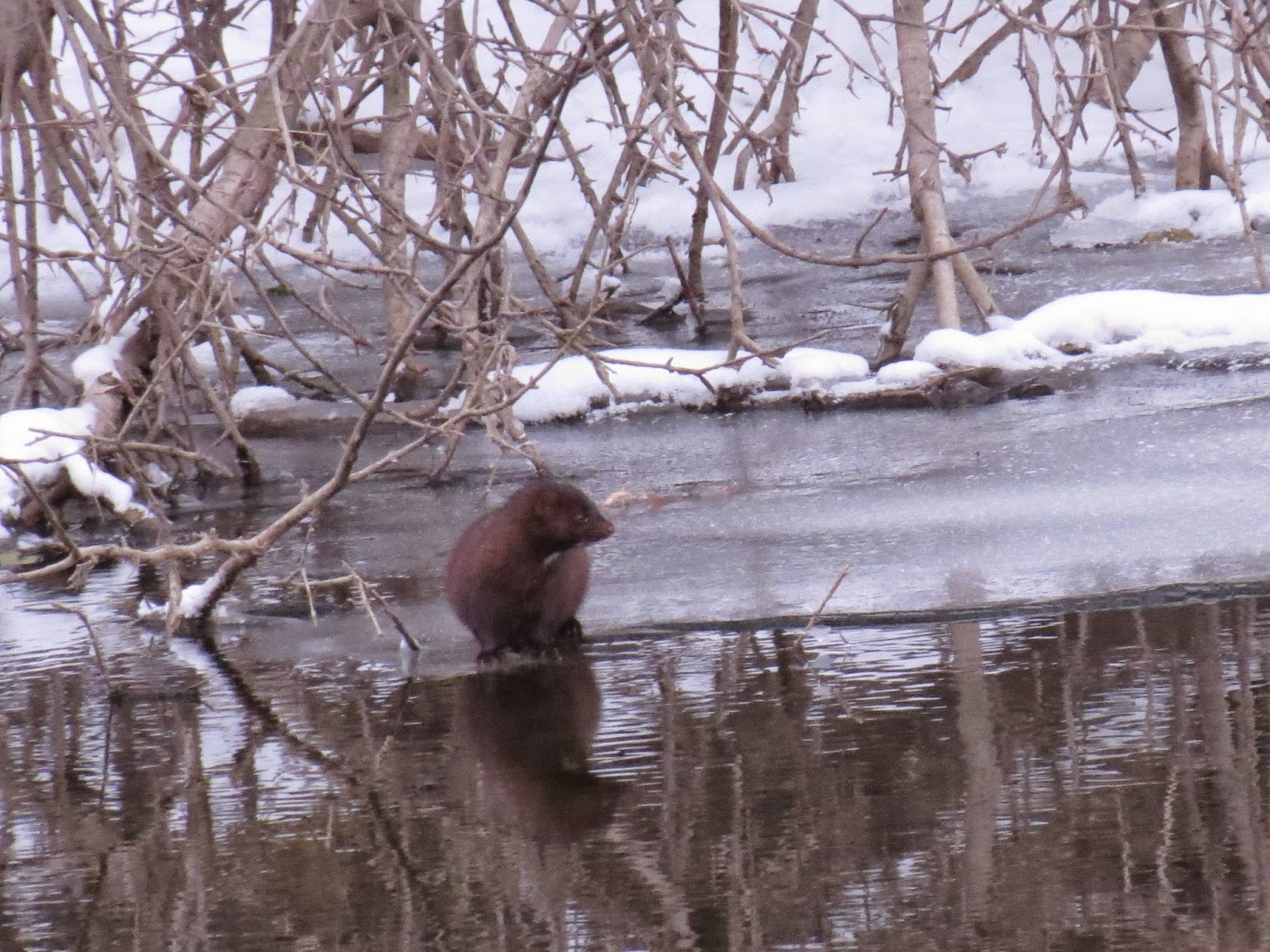 Mink become much easier to see after a bit of ice forms on the rivers. I enticed this guy a bit closer with some squeaking. 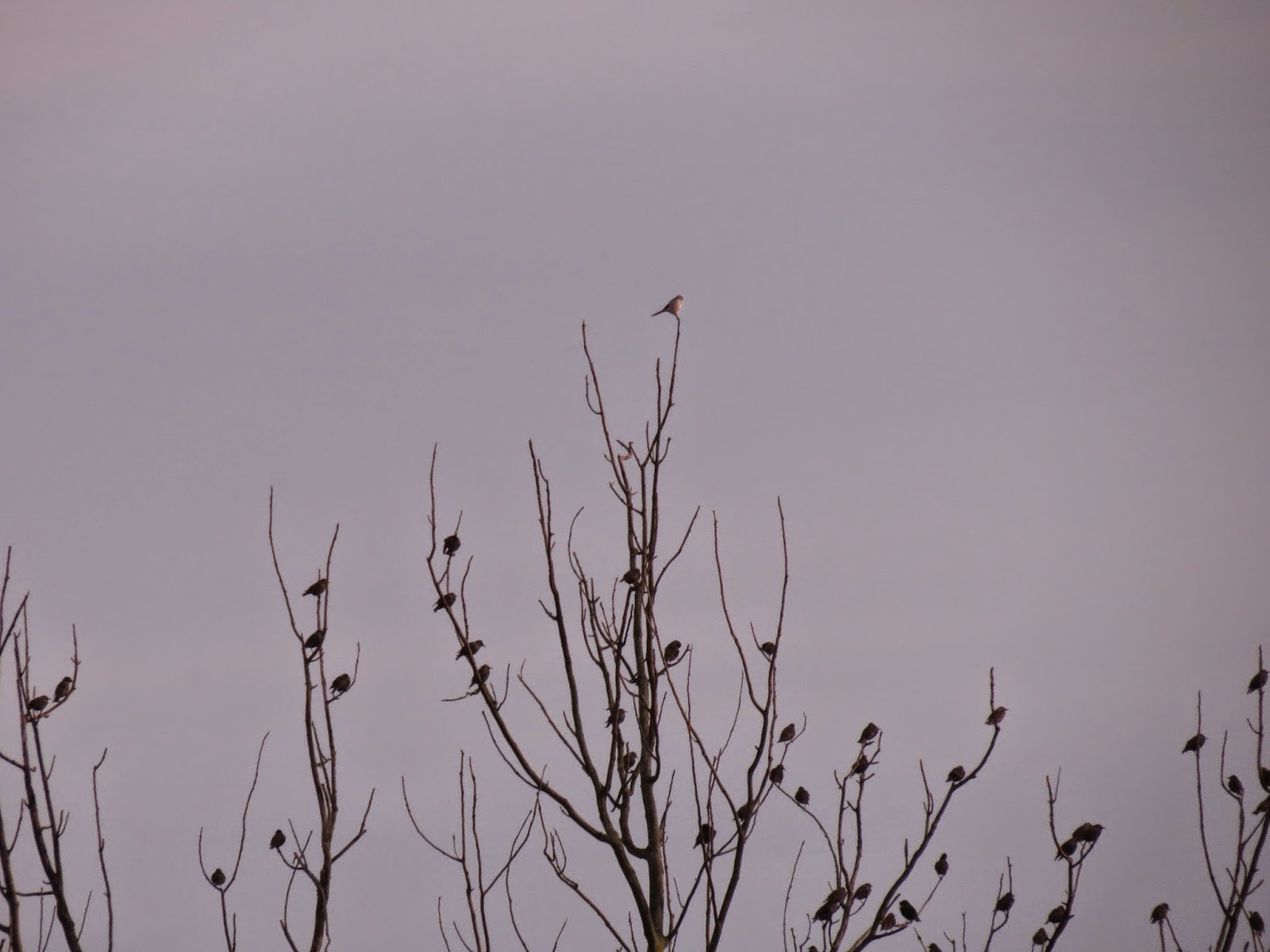 I've posted before about my local Northern Shrike in Guelph, and it has returned for another season. I was surprised about how unconcerned these starlings were with its presence. 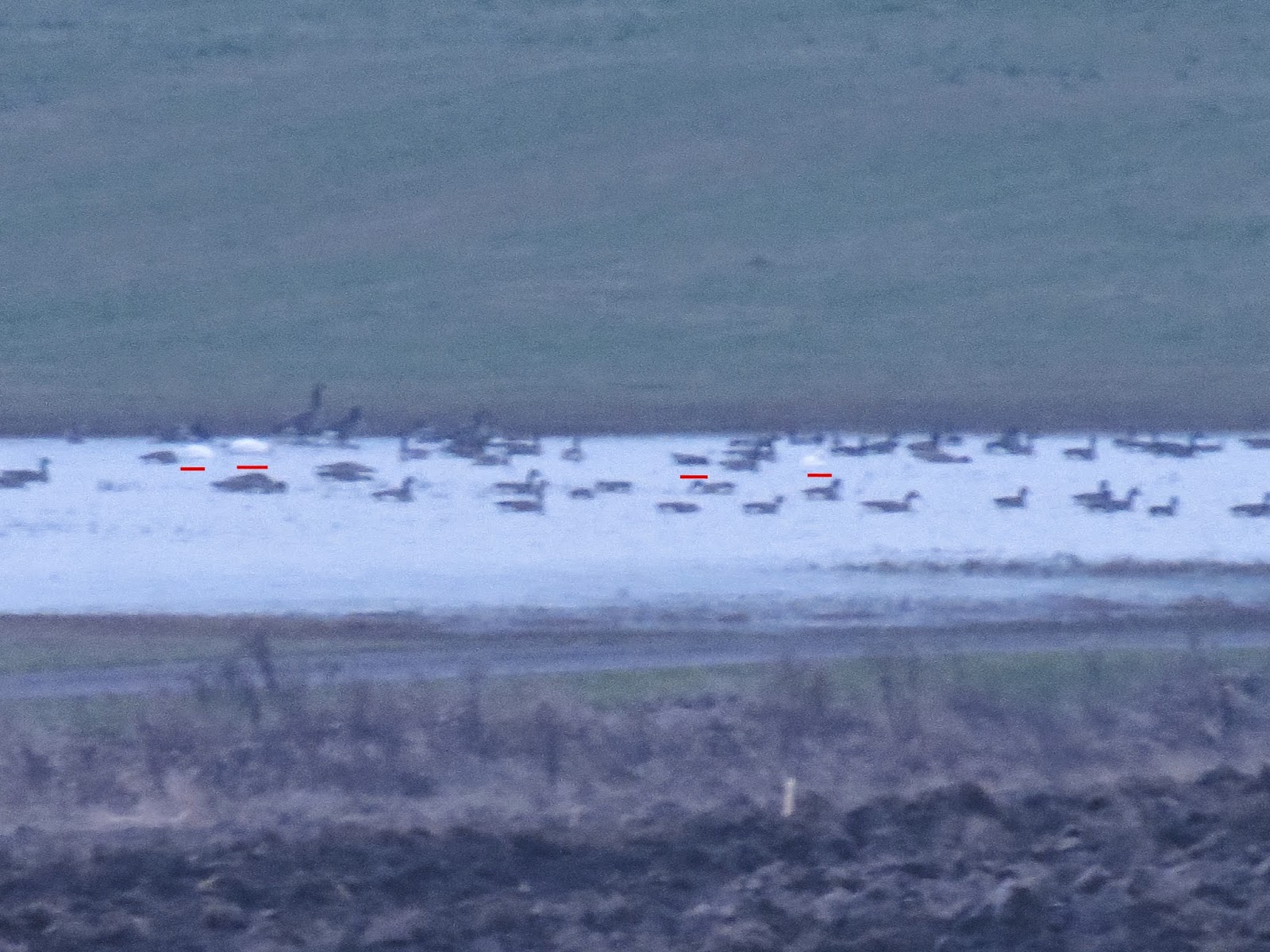 Mark, Todd and I headed out north of Waterloo today to look for Snowy Owls and other raptors. 1 Snowy and 3 Rough-legged Hawk were great to see, but my personal highlight was these 4 Snow Geese, including the first blue morph I've ever seen!

Posted by Reuven Martin at 9:25 PM No comments:

Yesterday a Barred Owl was reported to eBird from the University of Guelph Arboretum, so this morning Pilar Manorome and I tried to find it, and were successful in under half an hour. I was scoping out a distant Bald-faced Hornet nest (anybody who has gone looking for Barred Owls will know that they can be very similar-looking, and far more common!), when Pilar spotted it surveying it's surroundings just beside the trail ahead of us. 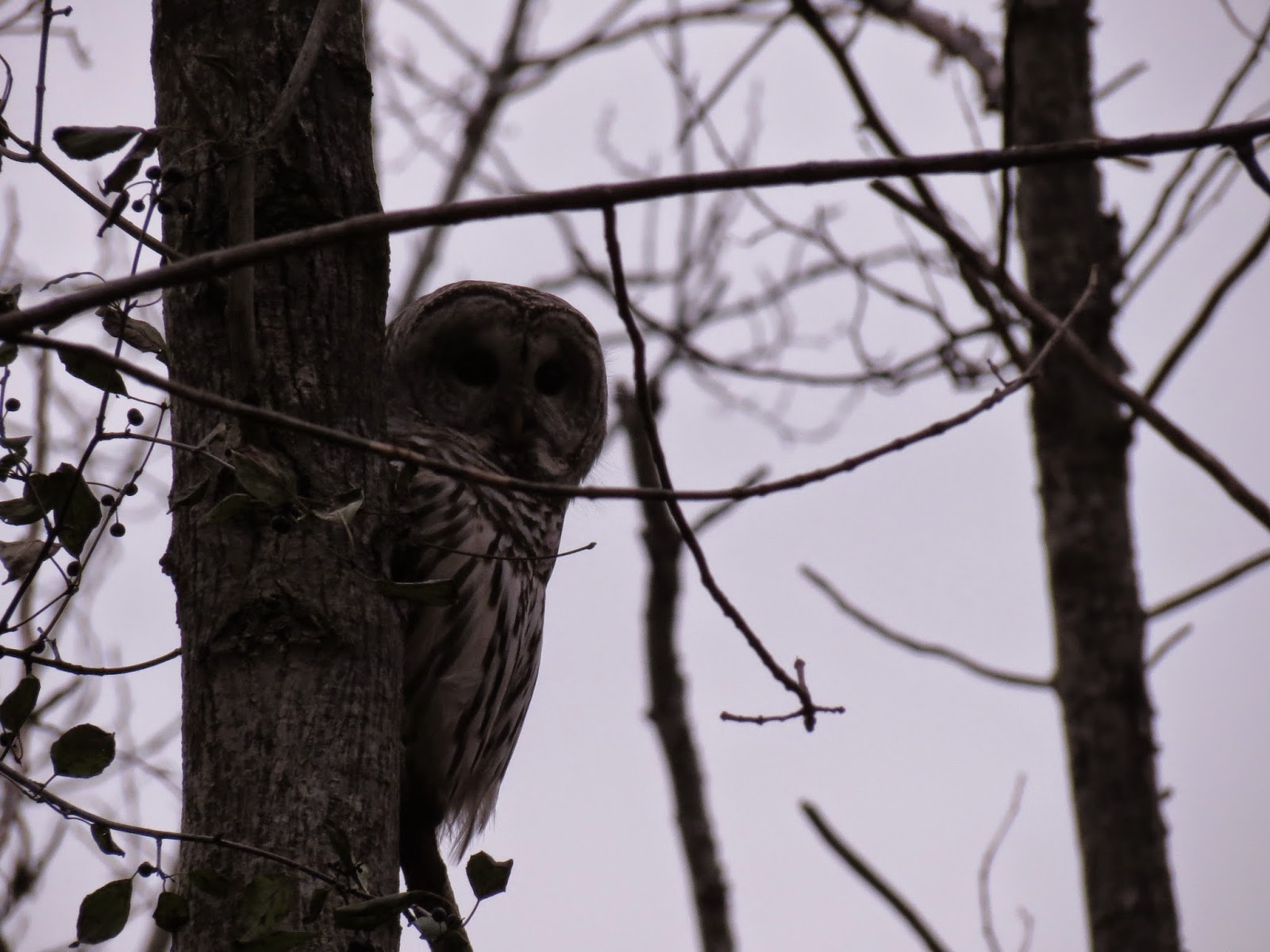 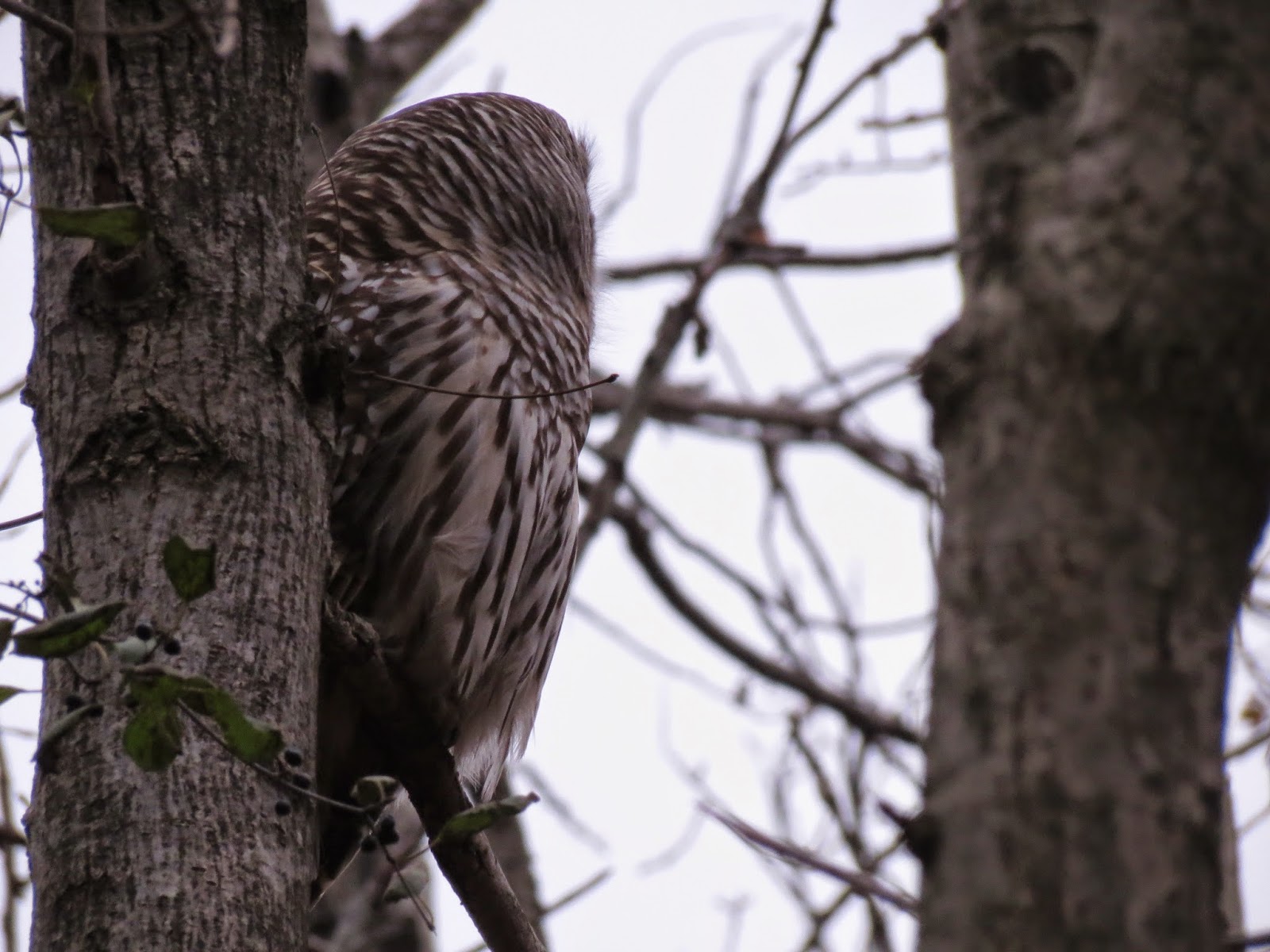 Barred Owls are uncommon in this area, but regularly come south in years of good rodent summers (resulting in lots of baby owls) and/or bad rodent winters. Judging by the ridiculous density of Deermice in Algonquin Park this summer it should be a pretty good winter for seeing Barred Owls in Southern Ontario. Check your local deciduous woodlots over the next few weeks as these owls move south!

What's good for seeing owls is not necessarily good for the owls themselves though. Like most of the Barred Owls I've seen outside of their usual haunts today's bird was actively hunting in broad daylight, something well-fed birds on the breeding grounds rarely or never do. Still, a Barred Owl successfully wintered here in 2012-2013, and hopefully this bird can too.

The other highlight today was a male Eastern Towhee, the latest fall bird I've ever seen and not a particularly common migrant at any time. Even though the landbird mix may seem wintry out there already, November is great for these occasional surprises. 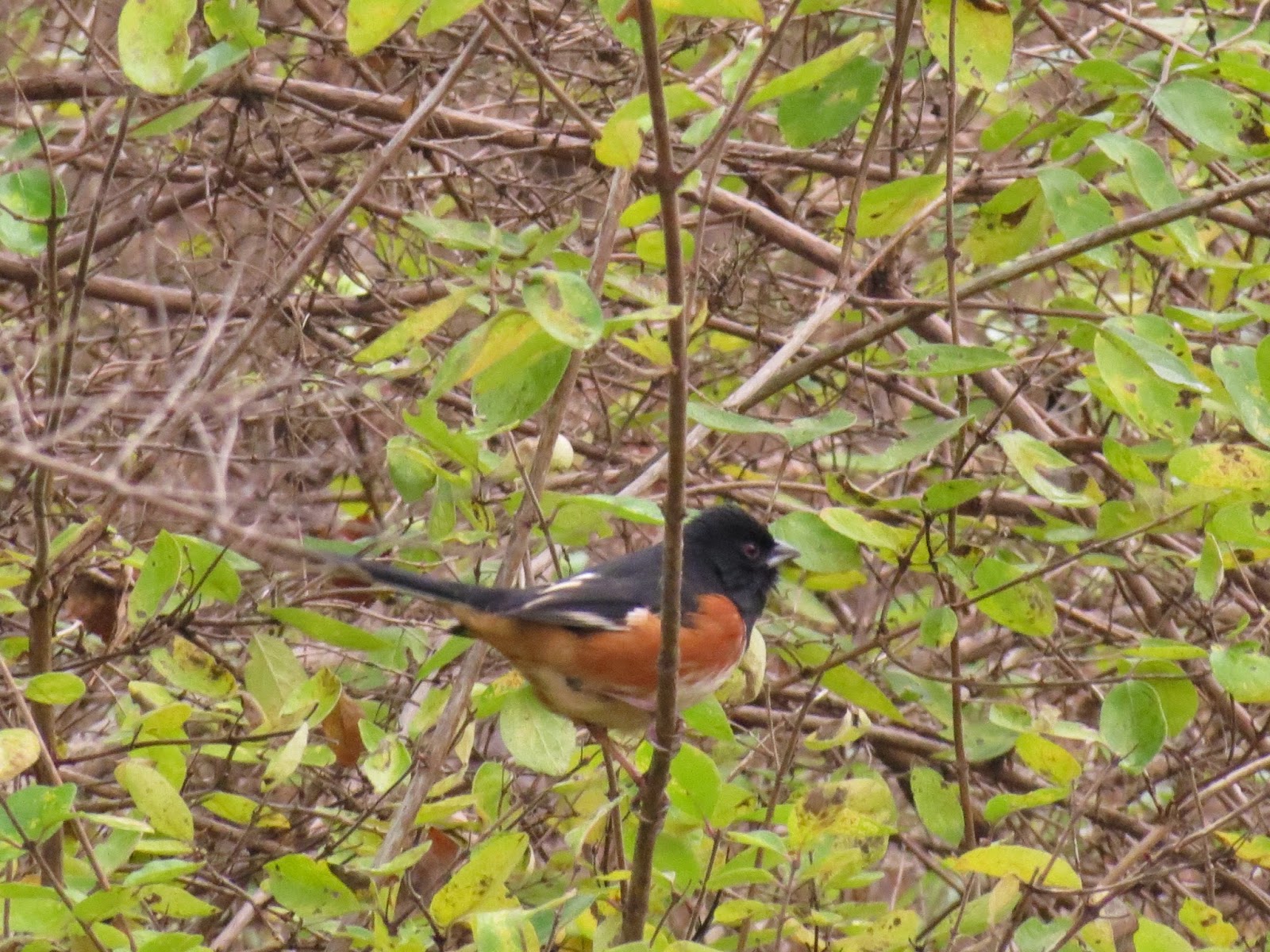 Posted by Reuven Martin at 9:49 PM No comments:

Yesterday I joined Todd Hagedorn, Mark Dorriesfield and Josh Vandermeulen for an excellent day of birding in the Hamilton and Niagara areas.

Our very first stop was at the Canada Centre for Inland Waters in Hamilton. We noticed a few Horned Grebes offshore and also another bird with them that looked a bit funny, but we all thought it looked fine for Horned. Thankfully Mark didn't let it go and once we brought our scopes to bear it was quite obviously an Eared Grebe, a fairly rare species locally! 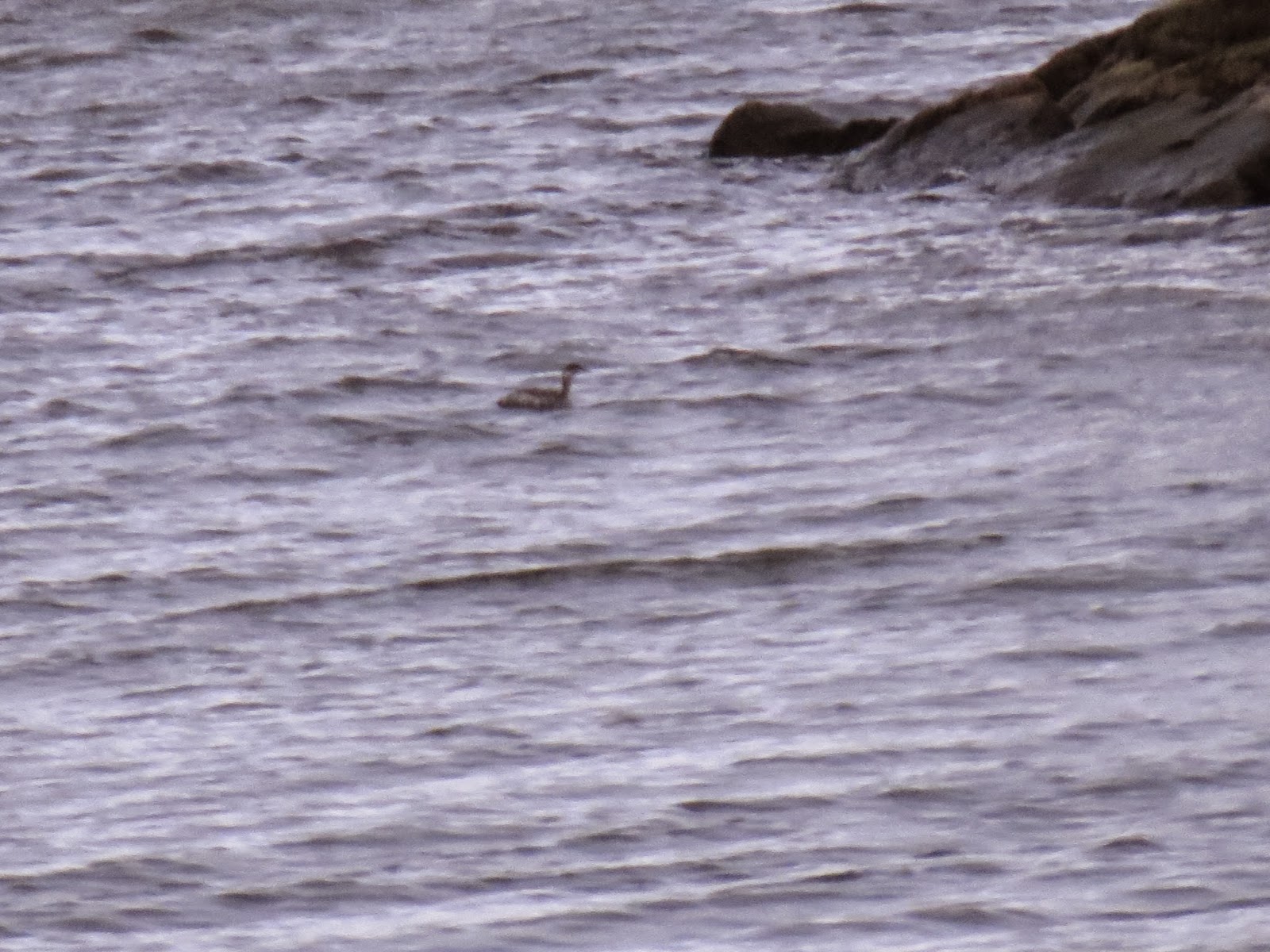 My best effort at a photo is rather dismal but you can see a hint of the darker cheek, one of the features distinguishing this as an Eared Grebe.

Luckily the bird has stuck around and many local birders have seen it this weekend.

We then headed further down the beach for a bit of lakewatching, and although the strong (and cold!) winds blowing in our faces seemed ideal for bringing some interesting stuff close to shore, we didn't have too much luck and eventually continued east. 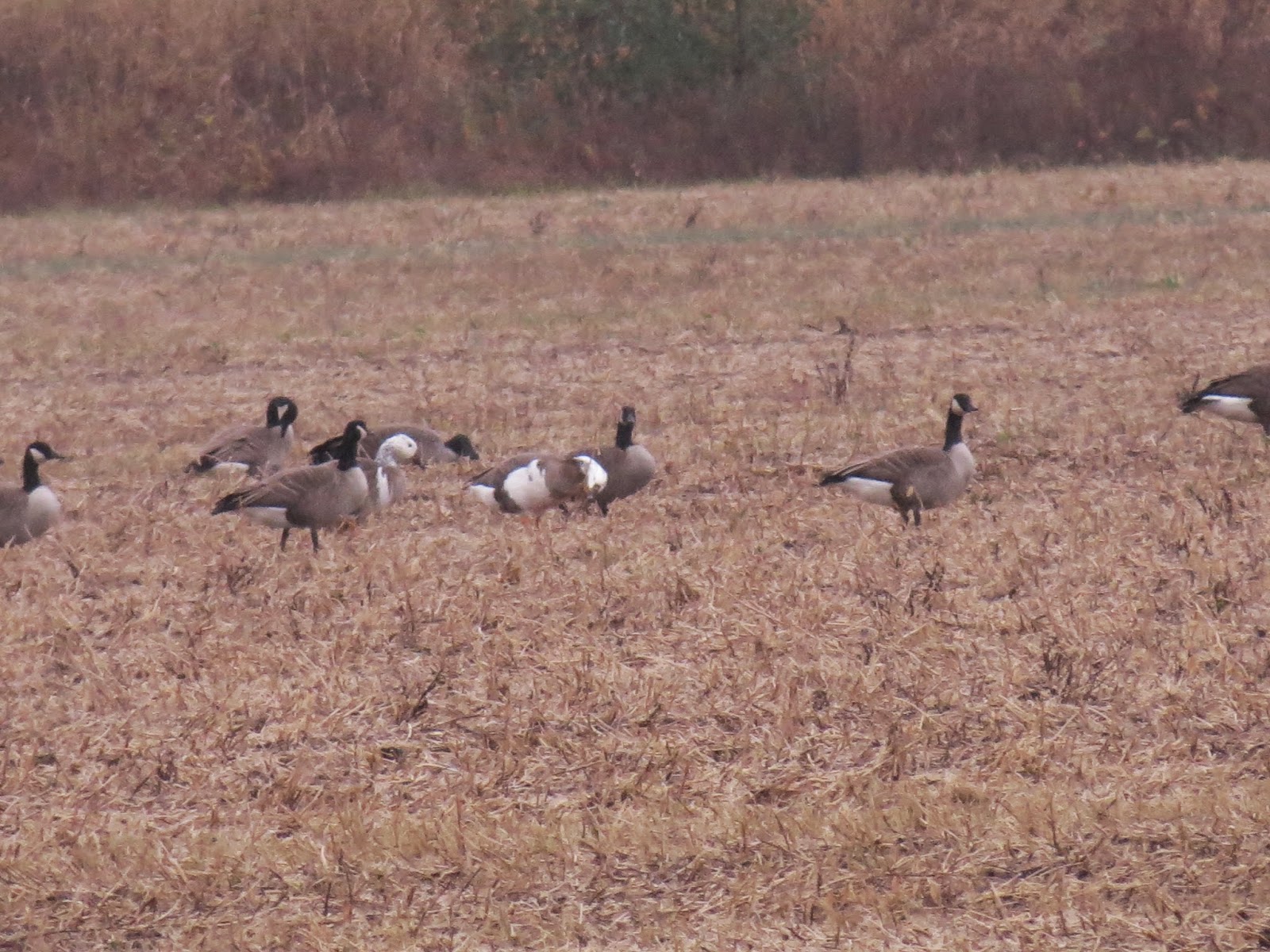 These geese in a random field somewhere were briefly exciting, but we quickly realised that they were some kind of domestic hybrid. In fact a bit of research reveals that they've been seen in the same area for a few years now.

Setting up again at Niagara-on-the-Lake, we immediately had a flock of about 25 Brant fly right by us! This small goose is quite tough to find locally and is usually only seen in flight during their late fall migration. I hadn't seen any since a distant flock during Hurricane Sandy in 2012, so was very excited. We had a second flock of about 80 birds a bit later too, but eventually moved on, spurred somewhat by the cold winds, spray, and sleet blowing into our faces!

We made a number of other stops not worth mentioning, but the highlight of the day was still to come when we checked out the area directly below Niagara Falls. While standing among the throngs of tourists we watched Bonaparte's Gulls feeding in the river directly below us, and almost immediately spotted something different. 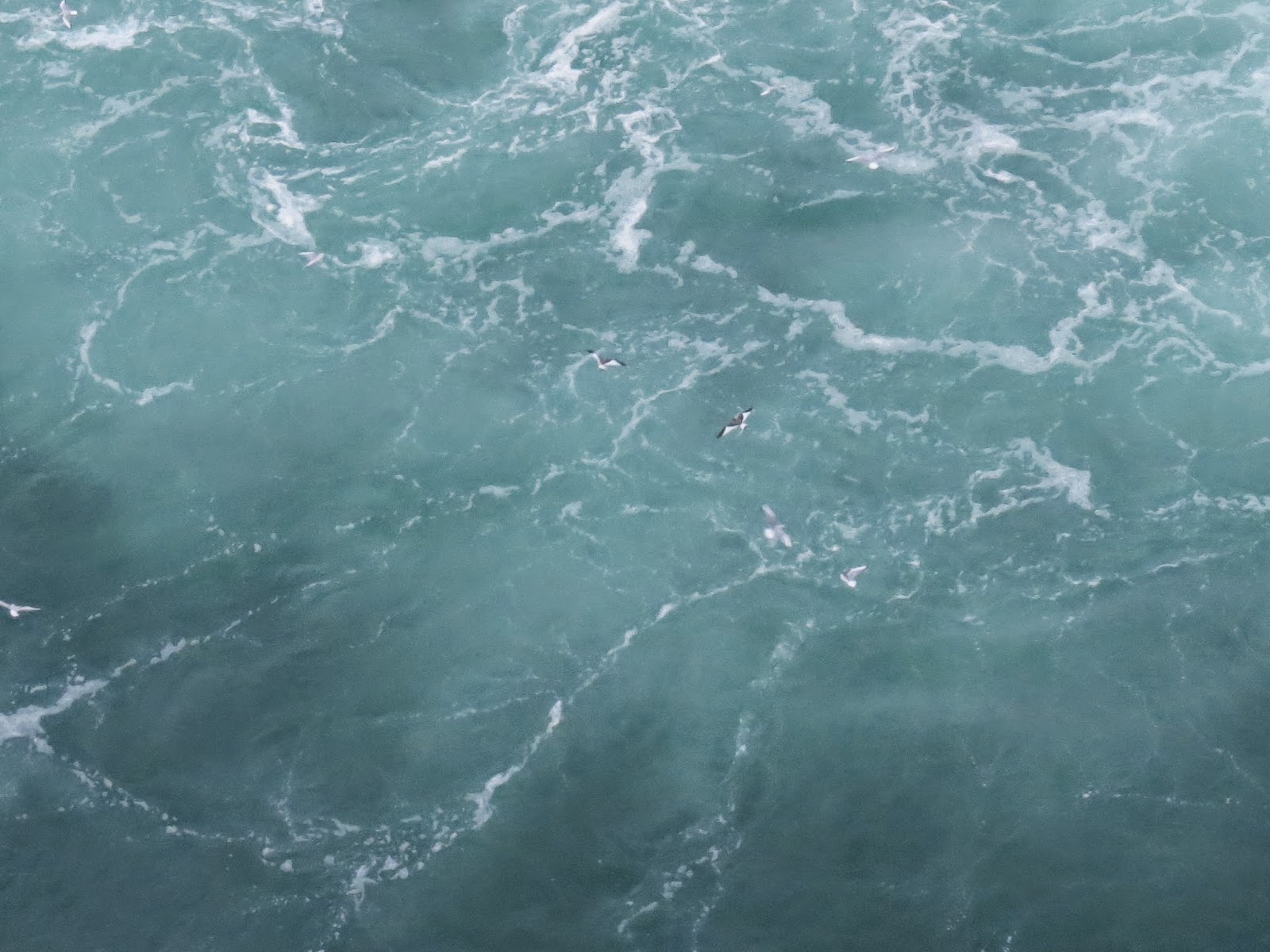 That bold wing pattern made the identification of juvenile Sabine's Gull immediately evident even with just naked-eye observations. Here's a closer look and a video: 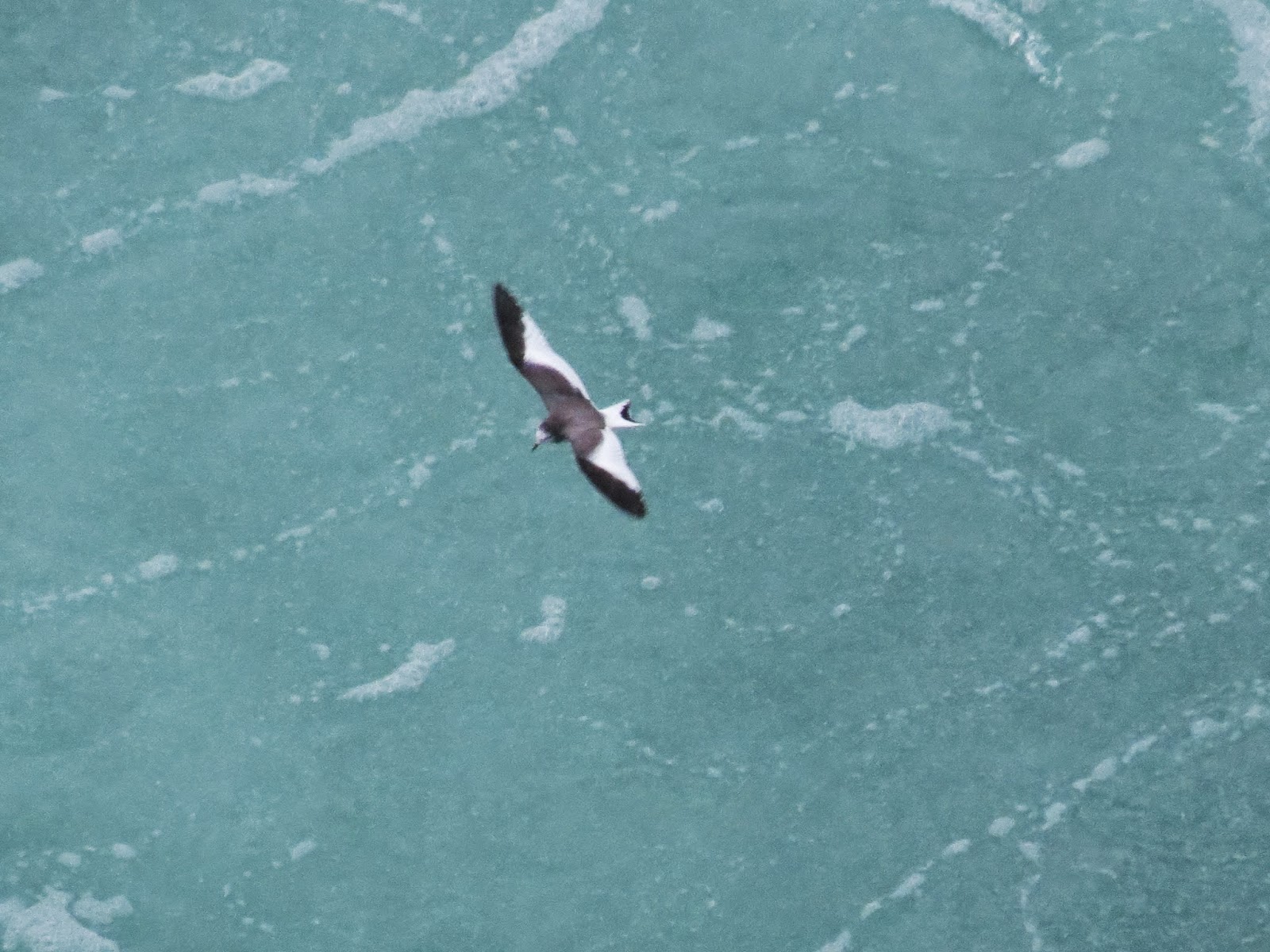 There were actually two birds present (as you can see in my first picture above), but they were not really associating with each other. Sabine's Gull is an Arctic-breeding gull that spends the winter on the open ocean, but small numbers, mostly juveniles, are seen in Ontario each fall. I've only seen this species twice before and never at this angle. Indeed, I can't imagine that there are many people who have seen Sabine's Gull from directly overhead given their propensity for the open ocean!

An excellent day if a bit bone-chilling. That is almost a given though when birding the Niagara River!
Posted by Reuven Martin at 5:22 PM No comments: