Loesel's Twayblade (Liparis loeselii) grows in variety of moist habitats including swamps, ditches and fens as well as pond edges like where I found this one. I was not able to catch up with this species last year so it was pretty exciting. 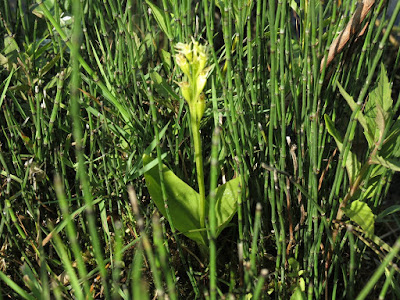 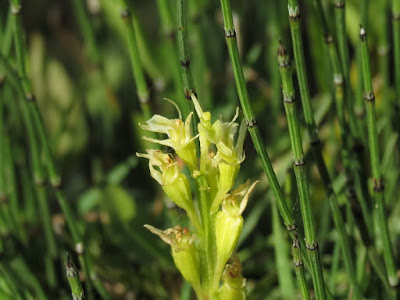 Shining Lady's Tresses (Spiranthes lucida) was growing in the same habitat, and was another new one for me. The Spiranthes species all look pretty similar, but this one is distinctive with the yellow flower centres. 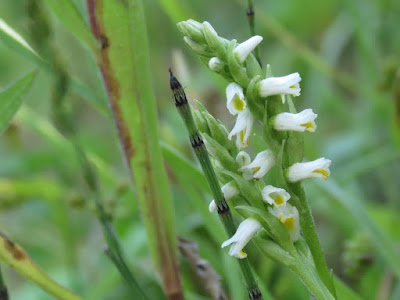 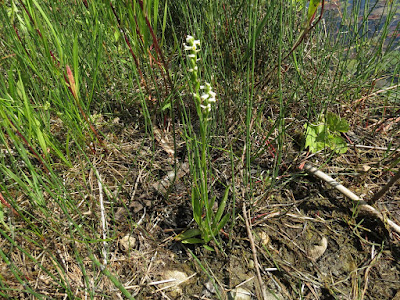 I've been working in some awesome swamp habitat recently with lots of interesting plants, including a few different orchids. I only had my phone for this one, so I'm impressed with how well the photos turned out. This is Platanthera aquilonis. It is often called Tall Northern Green Orchid or some variation on that, but that's way too long and boring so I'm not using that name. 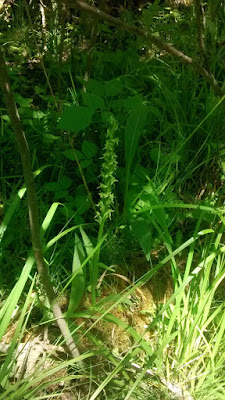 I had to run back to the car to get the camera for this one. There are hundreds of Showy Lady's Slippers (Cypripedium reginae) growing here, including some pretty large clumps. 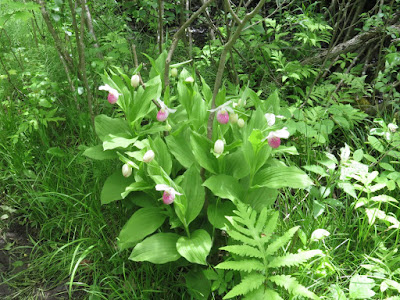 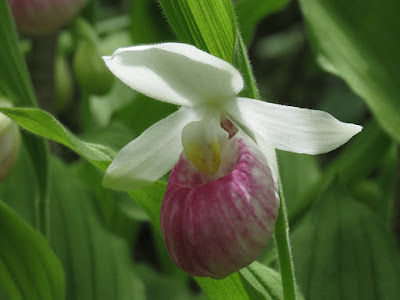 Pilar and I spent last weekend up on the Bruce Peninsula, and saw lots of interesting things including 11 species of orchid. This is Platanthera dilatata (White Bog Orchid), a close relative of the P. aquilonis above. 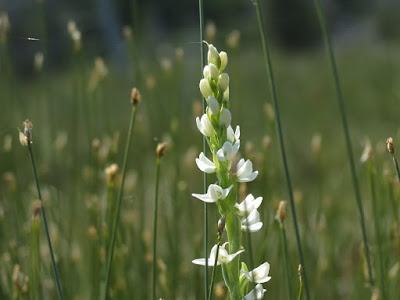 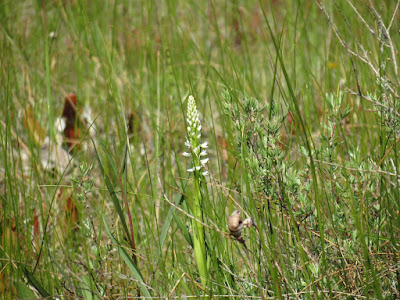 Two pink orchids were abundant in shoreline fens: the smaller and paler Rose Pogonia (Pogonia ophioglossides) and the large and showy Grass Pink (Calopogan tuberosus). The first photo shows both species together. 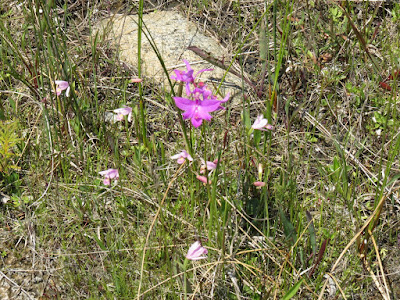 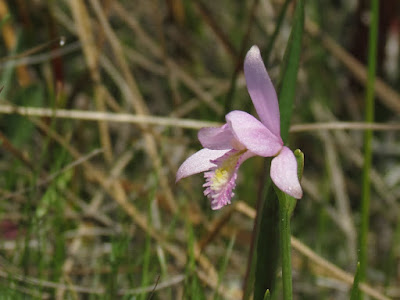 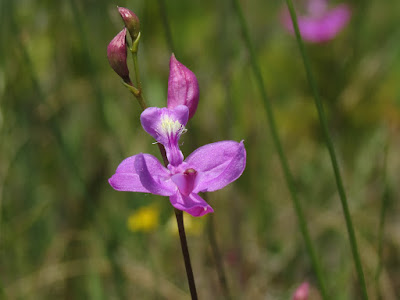 Now is probably the best time to get out to your local mosquito-ridden swamps and bogs to see these wonderful flowers!
Posted by Reuven Martin at 8:44 PM No comments:

I've posted before about parasitic plants that get all of their nutrients from root connections to either fungi or the roots of other plants. Here are a couple more species that I've encountered recently.

Orobranche uniflora (One-flowered Cancer Root) is a pretty little plant, with a number of flowers each on their own individual stalk. 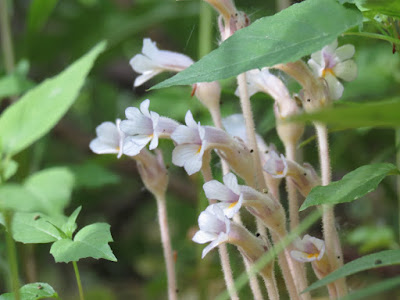 Ontario has four species of Coralroot Orchids (Corralorhiza), and with a couple of recent encounters with Early Coralroot (C. trifida), I've now photographed all of them in bloom. Unlike the other three species, trifida does have chlorophyll and is only partially parasitic. 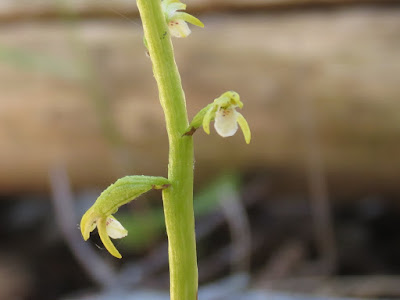 This is the much showier and larger Striped Coralroot (C. striata) 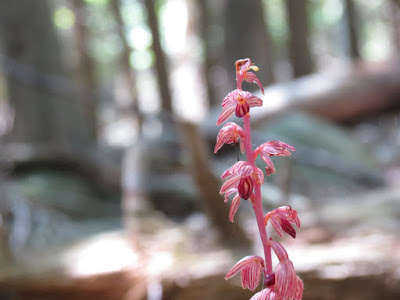 Posted by Reuven Martin at 8:08 PM No comments:

First Orchids of the Year

The orchids are once again emerging, with a number of species currently in bloom across Ontario. I haven't spent a lot of time in good orchid areas recently, but have still seen a couple of species.

Showy Orchis (Galearis spectabilis) is found in rich hardwood forests and is one of the very first orchids to start blooming. 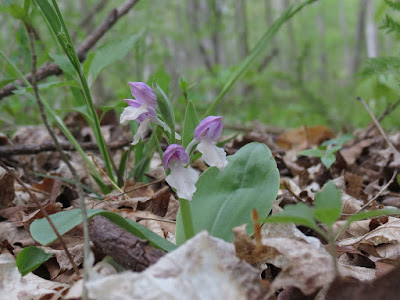 The Lady's Slippers (Cypripedium) are probably the most familiar wild orchids to most Ontarians. This is Small Yellow Lady's Slipper (C. parviflorum var. makasin). These ones were growing on the side of a ditch right along the roadside! A surprising diversity of orchids can be found growing in ditches from time to time. If you look closely, the top two blooms look very crowded. This is the rare case where two flowers grow from a single stem. The second photo shows this more clearly. 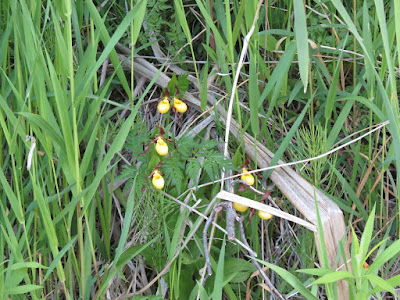 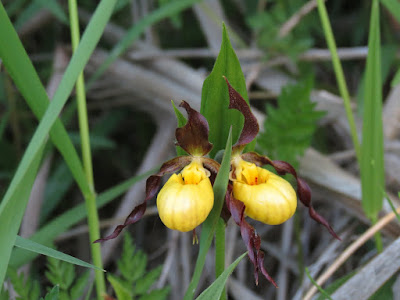 Posted by Reuven Martin at 4:36 PM No comments:

Yesterday I finally saw something I've wanted to for a very long time - a singing American Bittern. I have heard and seen them on numerous occasions, but never at the same time. These herons live in a wide variety of dense marshy habitats, but particularly seem to like cattail marshes, where they are basically impossible to see. Luckily, this bird near Milton was in some sparser grass, and provided great views! This is the first thing I saw: 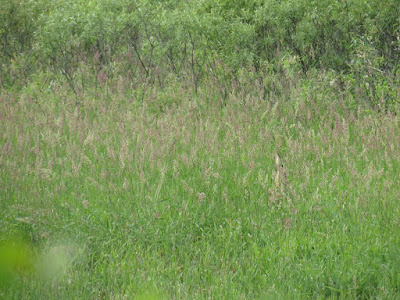 And here's a video of it's bizarre call: