It is certainly proving to be an interesting winter weatherwise. A huge ice storm passed through Ontario on December 21-22, with most trees losing at least some branches in many areas. 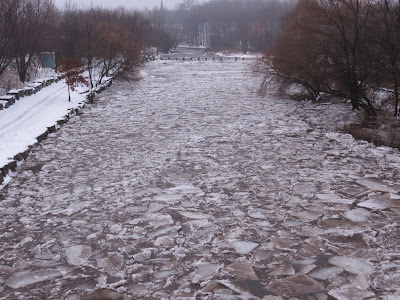 Before the ice hit, the Credit River was full of floating chunks of ice, clogging the river in places. 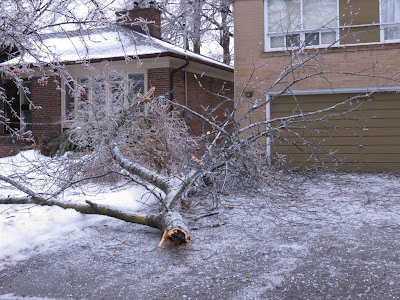 Late Sunday morning we heard a crash outside, and looked to find that a huge branch had fallen on my parents' driveway, damaging the roof and taking out the power lines. The power still hasn't been restored five days later. 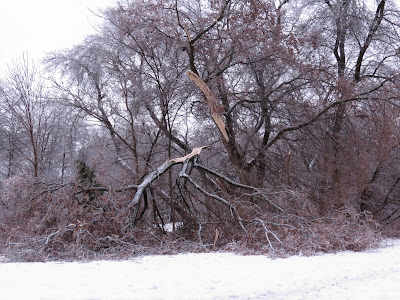 This is probably the branch whose loss I'll feel most keenly: I've seen over a dozen species of warbler in it over the years.

Despite the damage, the ice is really a beautiful sight, especially when the sun shines through it. 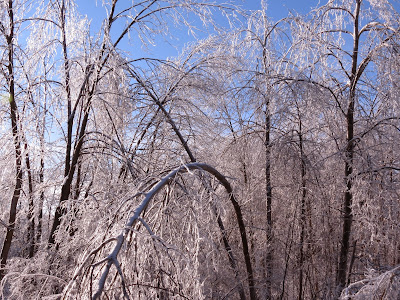 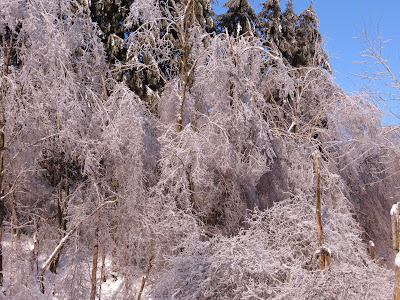 Over the past month I've had a few really nice close encounters with mammals. Last week I followed the sound of some agitated chickadees to find this Eastern Coyote. It was on a steep snowy slope above me, not in a tree as it appears from the photo. 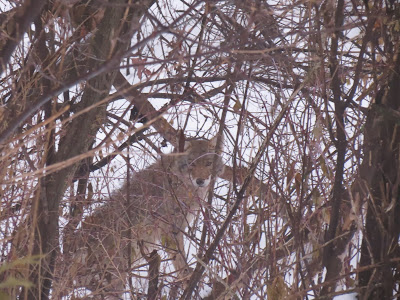 I don't see coyotes very often (this is my fourth or fifth decent look), so it definitely provided some excitement.


At the very end of November I came across a muskrat acting very strangely along the Credit River in Mississauga. It was staying very close to me, and was making circuits where it would go a bit downriver and then come back upriver, never going right past me. I'm not really sure what was going on, but here's a couple clips of what it was doing.

To round up this post, here's one of three raccoons I found curled up near each other on a very cold day. 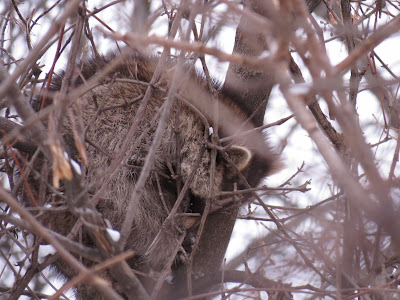 Posted by Reuven Martin at 7:42 PM No comments:

The last few days have seen continuing cold temperatures and a sizable dump of snow. The snow fell largely during the South Peel Christmas Bird Count, seriously impacting the number of birds seen. Most birds were at feeders or huddling in dense bushes like this robin. 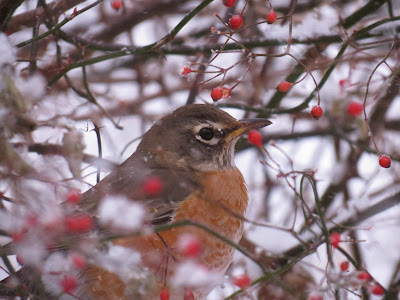 The local Mallard flock has swollen to nearly 100 birds in the past few days as ice covers parts of the river, including this male American Black Duck x Mallard hybrid. 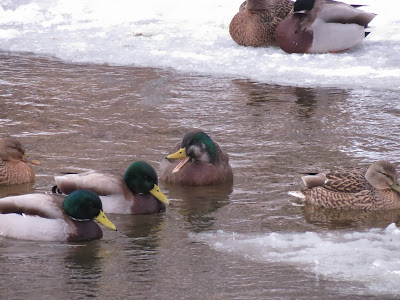 My group walked for about 7 hours on the bird count. Normally I'd go for longer, but the heavy snow made driving undesirable. Still, we found some nice birds in the snow, including 2 Pileated Woodpecker, 1 Belted Kingfisher and Swamp, Song and White-throated Sparrows.

A few days later, I took much of the day to stop at a variety of locations along Lake Ontario in Mississauga and eastern Oakville.

The first birds I saw on my first stop of the day were a small flock of Common Goldeneye close to shore. It was immediately apparent that one of the birds was a bit different, with an almost entirely orange-yellow bill. 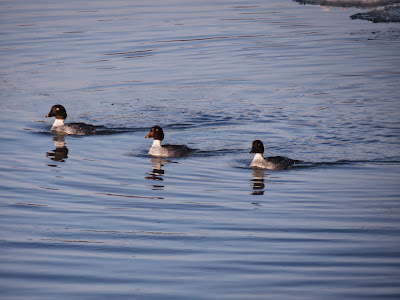 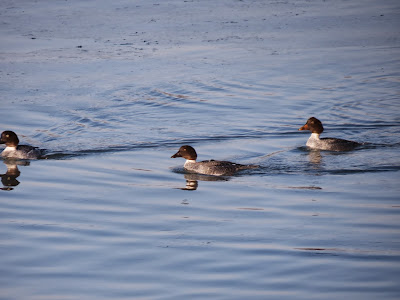 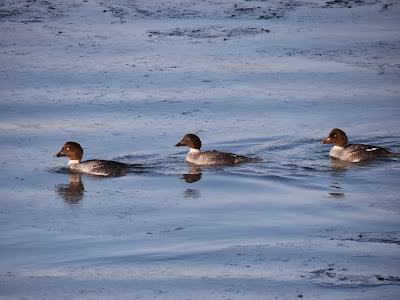 This bill colour is an indication of Barrow's Goldeneye, a rare bird here, but head and bill shape show that this is a Common Goldeneye with a yellow bill - a rare variant that I've seen a couple of times before.

My main goal for the day was Snowy Owls, and I stopped at a number of parks to scan piers, marinas and floating ice for owl-shaped lumps. My first success was of a very heavily marked Snowy Owl sitting on some piled up ice way out in Lake Ontario. 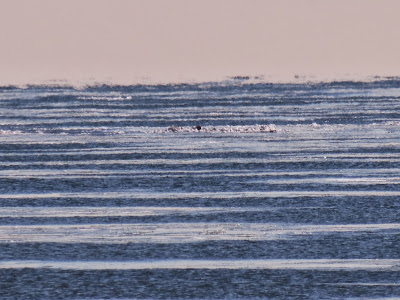 I could tell (barely) that it was a Snowy Owl, but needless to say I wasn't quite satisfied yet.

At my very next stop as I scanned the ice I noticed another Snowy Owl flying around out over the lake. I watched it for about two minutes as it moved eastward, circled a few times and was harassed by gulls before disappearing into the shimmer on the horizon.

My Snowy Owl adventures for the day weren't over yet though - I scanned a large pier in the early afternoon to see not one but two Snowy Owls sitting in plain view! 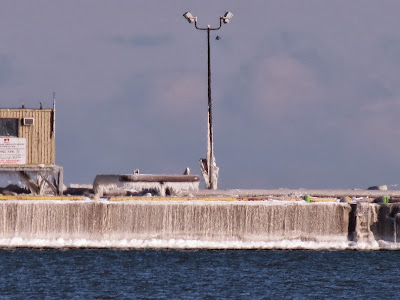 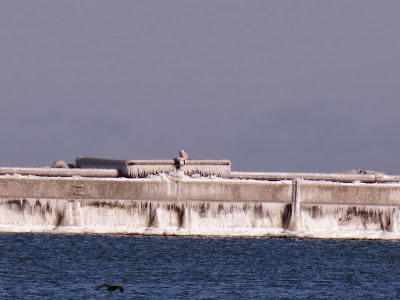 Again, looks were far from ideal but by this point I didn't care. Four Snowy Owls in a day is incredible, considering some winters go by without any being seen in Mississauga. Before this day I'd seen 5 Snowy Owls, and only 3 before this December!

For those who aren't familiar with it, SNOW is the bander's code (shorthand for quickly recording bird species) for Snowy Owl, hence the title.
Posted by Reuven Martin at 5:44 PM No comments:

I've been very busy in the past week with 4 exams, but I still managed to get down to Hamilton for an afternoon last weekend with a few other birders from the university.

Our first goal was to find one of the Snowy Owls that have been seen around Hamilton Harbor recently. Sure enough, a heavily marked owl (so presumably a young female) was apparent at the back of the Tollgate Ponds off Eastport Drive. 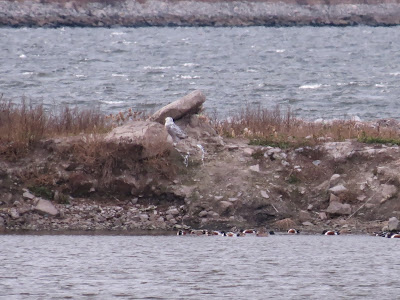 The many Northern Shoveler seemed very unconcerned about the owl. They may not have been able to even see it with how close to shore they were, but it's hard to tell. This is my second Snowy Owl of this year's irruption, with hopefully more to come!

We continued on to Fifty Point Conservation Area, where we quickly got reasonable views of my lifer Common Eider. It wasn't nearly as close as some others have seen it, so I didn't bother with pictures, but a number of photographers have obtained excellent photos of this female (e.g Josh Vandermeulen).

Our final stop was the continuing female King Eider a few kilometres down the shoreline. King Eider is far more common on Lake Ontario than Common Eider (probably one of the few places that's true), and this was my 5th. It offered great looks, giving a nice comparison with the Common.


This sort of hasty, twitch-focused birding (for those not familiar with all the birding lingo, a twitch is the act of chasing a reported rare bird) with more time in the car than the field isn't really my ideal thing, but it was great to get out for an afternoon and see some awesome birds.

On Saturday I'm covering in my normal route in the Oakville-Mississauga Christmas Bird Count. I'm looking forward to it despite the very cold temperatures in the forecast. In the past few years I've had some great birds, including Barred Owl and Common Yellowthroat. A full day in the field is bound to turn up some interesting finds, especially as the snow and cold pushes birds to feeders.
Posted by Reuven Martin at 8:04 PM No comments:

I walked around Erindale and Riverwood parks in Mississauga for a few hours today, finding a few notable birds for winter (Swamp and White-throated Sparrow, 5 Winter Wren, 2 Great Blue Heron). At one point as I walked along the riverside, I noticed a pair of Mallards showing some serious interest in a salmon carcass (I believe it's a Chinook Salmon, but a number of other salmon and trout are present in the river). Check out the video I took of this bizarre behavior:


Scavenging dead salmon seems to be pretty regular on the Pacific Coast of North America (e.g. here, which is the classic location for major salmon runs, but I haven't found any references to this behavior elsewhere.

For another fun story about mallards, check out this article.
Posted by Reuven Martin at 3:40 PM 3 comments:

I headed down to Long Point today, and it was a really great day. The main reason I went down was to help out with the Long Point Christmas Bird Count For Kids. We spent a few hours birding around the base of Long Point, and had a great time, seeing, among other things, a pair of Peregrine Falcons among various other raptors, hundreds of Sandhill Cranes and Tundra Swans and good numbers of blackbirds (Rusty, Red-winged, Grackle and Cowbird were all present). The best bird was a Cackling Goose. I'm pretty proud of this one - we were driving slowly along Lakeshore Rd. scanning a goose flock with the naked eye, when I was able to instantly pick out this bird. 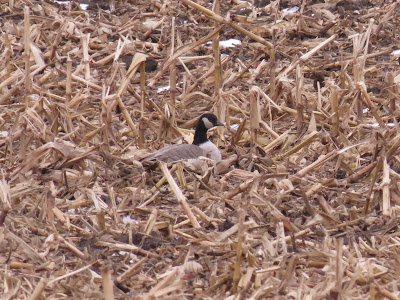 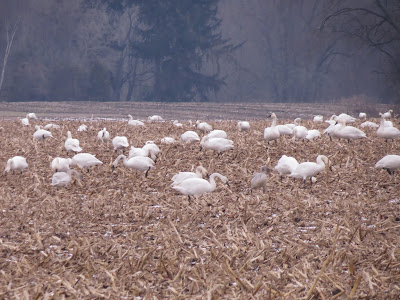 I normally think of Tundra Swans as a harbringer of spring, but in the Long Point area, where temperatures are warmer and snow rarely lasts long, they'll stick around through the winter. 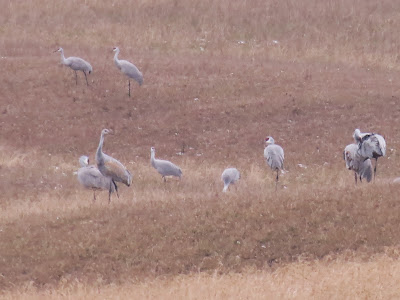 I had never seen more than 30 or so Sandhill Cranes in a day before, so seeing about 1000 today was a real treat.

For the rest of the afternoon, I did some more birding around the area. The first highlight came while scanning the ice of the inner bay near the Old Cut banding station. 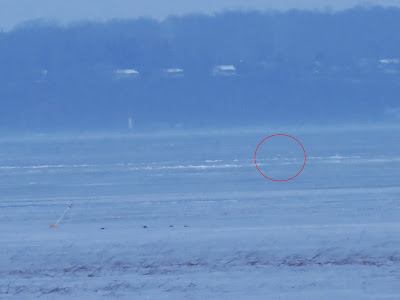 You can totally tell what that is, right? Neither could I at first, but I had strong suspicions, and sure enough after about 15 minutes it took off, revealing the rounded white wings of a Snowy Owl! I came back about an hour and a half after my first sighting in hopes it would be closer, but as you can see from the picture (actually taken on my second visit), it was still offering rather unsatisfying looks. Still, no day with a Snowy Owl is a bad day!

Also on the ice here was this raccoon acting very oddly as it picked lethargically around the edge of the open water. When I returned later in the afternoon, it was laying, apparently dead, on the ice. Not really sure what the story is here. 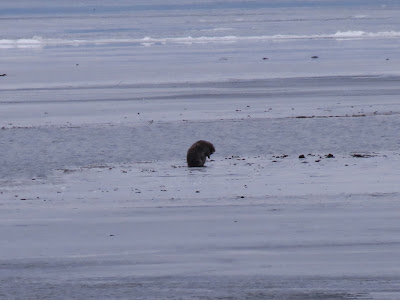 Luckily, I had several sightings of much healthier mammals, including great looks at Short-tailed Shrew, Mink and White-tailed Deer.

Shortly after, I headed to Old Cut, where the Vesper Sparrow first seen and banded a few days ago was hopping around under the feeder with Juncos, American Tree and White-throated Sparrows. 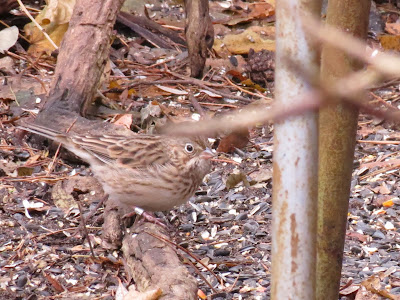 I found it very odd to see this open-country species in the brushy woods. Vesper Sparrows are not common at feeders at any time of year, and are very uncommonly found anywhere in Ontario in winter.

The rest of the day was uneventful in anything of note from a rarity perspective, but I was never bored. Snow Bunting, Cooper's Hawk, Carolina Wren, Eastern Bluebird and several Northern Harrier all provided great looks in the provincial park.

As dusk fell, I headed down the causeway to the lookout over Big Creek Marsh, for what would be one of my favorite experiences this year. Huge numbers of Sandhill Cranes, Tundra Swans, Canada Geese and ducks (likely almost entirely Mallard and American Black Duck) were flying around to roost in the marsh. I estimated about 1000 Sandhill Cranes, 1000 Tundra Swan, 500 Canada Goose and 2000 ducks, although I really wasn't focused on the counting. As the flocks flew back and forth across the setting sun and directly overhead, the voices of the cranes and swans mingled to make one of the most incredible sounds I've ever heard. One of those moments that makes me feel incredibly lucky, and happy to be alive. The title of the post is literally true - I was in awe this evening.
Posted by Reuven Martin at 9:50 PM 2 comments: