Back in late May, I noticed a few interesting things. First, lots of trees had been almost totally defoliated: 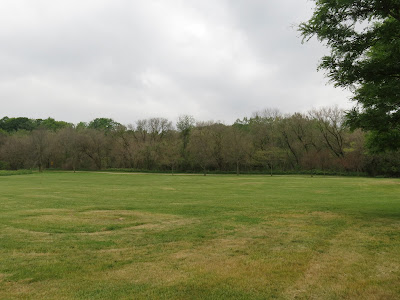 Second, these caterpillars were present at incredibly high densities: 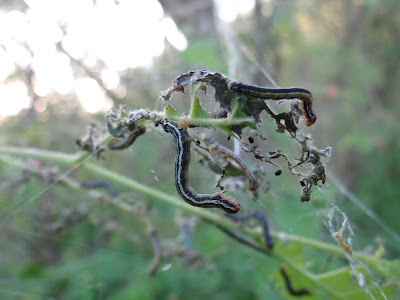 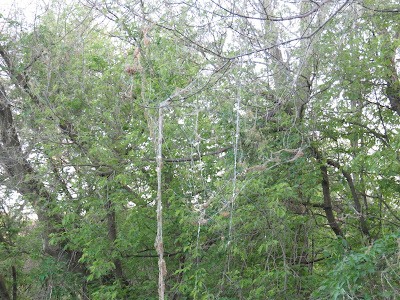 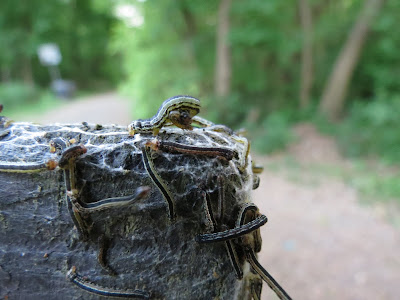 I identified them as Fall Cankerworm (Alsophila pometaria), a common native moth that often causes severe defoliation. Jumping forward five or six months, I've been noticing moths flying around everywhere recently, even in the middle of the day. 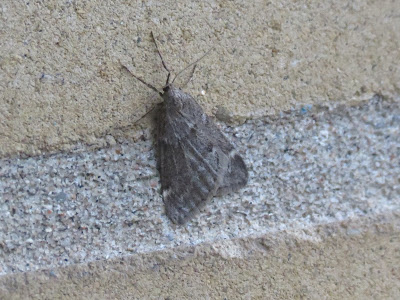 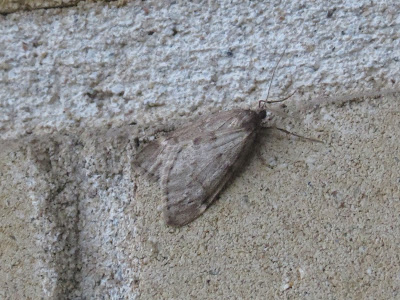 These are the male Fall Cankerworm. The really interesting thing is the female: she is completely lacking wings, and must crawl up a tree (or in this case a house) to lay her eggs! 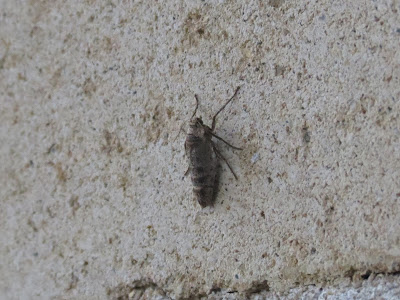 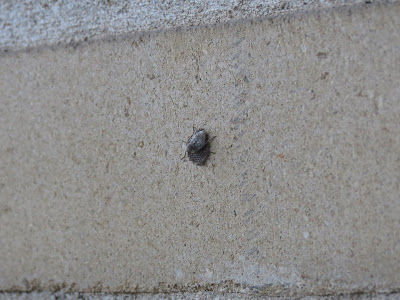 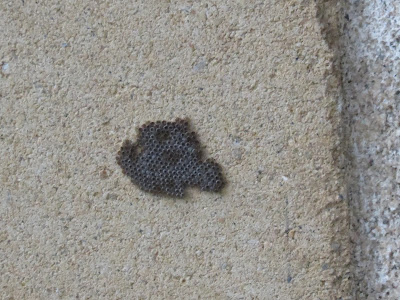 Now, to link this back to my last couple of posts, I have been seeing many species of birds eating these moths (or perhaps also other species, as there a few moths that emerge at this time). For lingering insectivores, this is one of the only sources of food right now, and they have been taking advantage, like this Bay-breasted Warbler from Mississauga on November 19. Once things get cold enough to kill the moths or force them into hiding, I expect the birds to start getting desperate and increasingly showing up at those places with other sources of food. 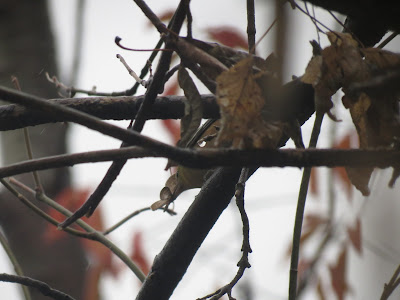 I've gone over some basic ideas of where these birds hang out and how I think you should look for them, so here's the first of a couple of posts listing some good areas to check and why I think so. This list is by no means exhaustive, and practically any vegetation within urban and suburban areas could yield results. 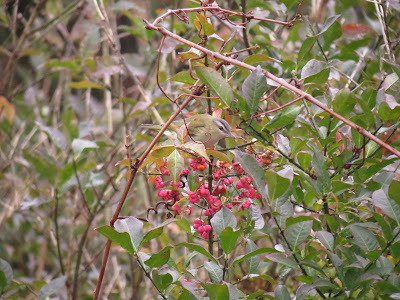 I’ve never been here, I don’t know of any track record for this location, and it looks like a different setup than the one at places like Sedgewick Park where there are extensive areas of exposed water tanks. But there is a footpath running around the well vegetated exterior of the plant and along the open water of the Humber River, and I would think it’s worth checking out, especially the spot with the yellow arrow. 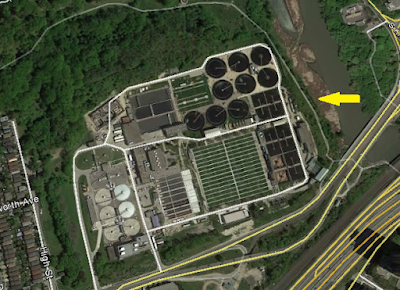 There are two peninsulas here – the eastern one is mostly well vegetated with shrubs, the western is mostly manicured, but both are definitely worth checking. There is a pretty decent track record here:

This well-birded park includes a large and densely vegetated peninsula with a pretty good track record of interesting birds. Although the park seems fairly small, it would be easy to spend a couple of hours carefully looking for songbirds here. 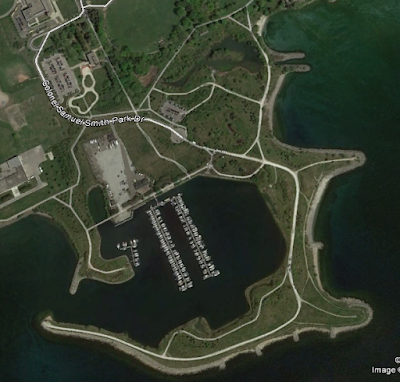 This place looks like it should be phenomenal for wintering songbirds, but there has never been anything seen as far as I know. Good numbers of waterfowl use this spot, including good winter birds like Wood Duck. The main issue is access. The only directly adjacent area that is accessible is a little bit at the northeast corner (in red). I have checked here in the past without any luck. Note that the wooded area west of here is mostly fenced off. The woodlot in yellow was formerly accessible, but the construction will likely block this soon if it hasn’t already. The purple arrows point to interesting looking areas that are currently completely off limits.
The good news is that work is underway on a new conservation area that is being built out into the lake here with clean fill. Construction has just begun so this is many years away, but in the future this area will become much more accessible. 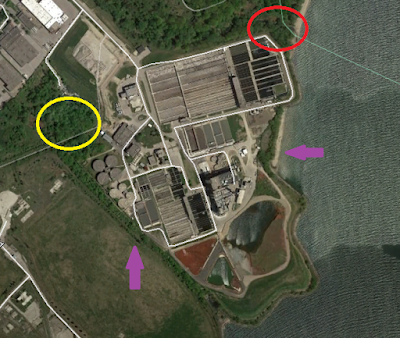 This area, technically consisting of several different parks on a couple of peninsulas, is mostly pretty well-manicured although there are still lots of dense shrubs for birds to hide in, and I think it is all well worth checking. The western peninsula (R. K. Mcmillan Park) is naturalised and has a bit of a track record for interesting songbirds. 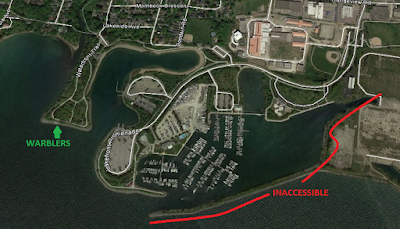 This is perhaps the most reliable spot in the province to see overwintering Yellow-rumped Warblers. However, the explanation here is not really insects but instead planted Wax Myrtles, which Yellow-rumps are adapted to digest (incidentally, this is where the name “Myrtle Warbler” for the eastern subspecies comes from). Still, the open water and the presence of other warblers could entice something unusual to drop in here. 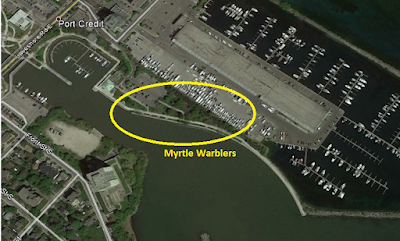 Just north of Lakeside Park is a large sewage treatment plant. It is completely inaccessible, and it doesn’t look like there’s much vegetation for birds to use. Still, it’s a spot that likely hosts interesting birds on occasion. Large numbers of waterfowl spend the winter in this area, flying back and forth from the sewage plant and Lake Ontario.

Lakeside Park itself is well vegetated with one stream, and there are a few interesting songbirds that have been seen here. The Wilson’s Warbler hung out at the extreme western edge of the park, even though there is no obvious reason that area would be attractive. Note that a lot of the vegetation in this area (everything outside the red lines) is not accessible. 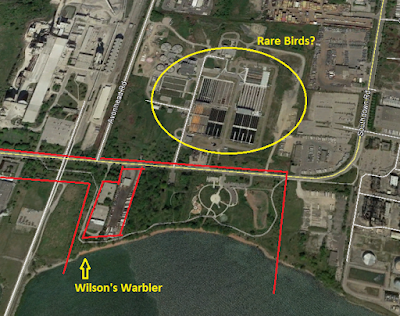 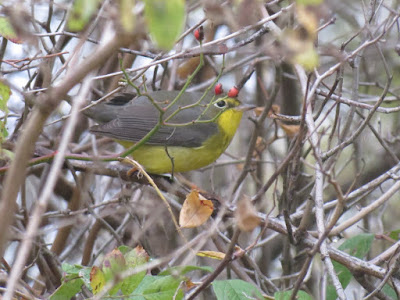 At the end of October I found this Canada Warbler in Mississauga. This is record late for the area, and really crazy as, per eBird, most Canadas are already at or near their tropical wintering grounds. However, this sighting is perhaps not that surprising given the records of warblers and other insectivores in this area into early winter every year.

In the last six Decembers, at least 16 species of warblers have been seen along Lake Ontario from Toronto to Hamilton*. What are insectivorous birds doing in Canada in the winter? The answer isn't totally clear, but there are a few possibilities. Some are definitely sick or injured birds incapable of accomplishing a long migration. Others may be utterly lost. A third and most intriguing possibility is that global warming and human development are allowing certain species to winter much farther north than they used to. We could be seeing a vanguard of a change in wintering behavior for some populations, much like has famously occurred among European Blackcaps, with large portions of the population now wintering at British bird feeders.

Now, this certainly isn't occurring in quite the same way with our warblers - the vast majority of individuals disappear (and presumably perish) long before spring returns. Only a few species like Yellow-rumped and Pine can survive our winters with any regularity. Still, it wouldn't surprise me if we're seeing a northward shift in the wintering ranges of many of these species into the southern United States, especially with habitat loss in the tropics. Mostly baseless speculation, but fun to think about. 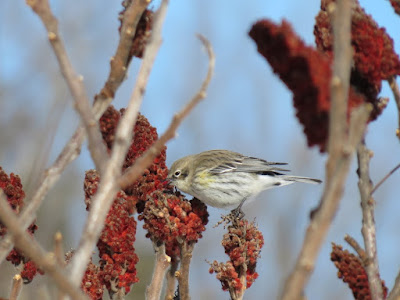 This Yellow-rumped Warbler survived the winter of 2012-2013 in Oakville.

Regardless, seeing warblers in November and December is always exciting, and looking for them and other insectivorous birds is one of my favourite things to do, especially as the chance of a major rarity is pretty good. I've thought about this quite a bit and wanted to write some quick guidelines for what I think helps in finding these birds.

First of all, when should you look? I think this is very weather-dependent. As I write this, it is still very warm, with double-digit temperatures every day and lots of insects still around. As a result, I think there are probably a lot of lingering insectivores around right now. However, they are likely so spread out as to be impossible to find. Once things get cold and food gets scarce, these birds will be forced to move to limited areas where they can still make a living. I think this is usually early to mid-November, but can be earlier or later (as in this year). And keep in mind that this is all speculation with a little bid of anecdotal evidence, and I could be totally wrong!

So where are the birds going to move? There are a few things they are probably looking for: 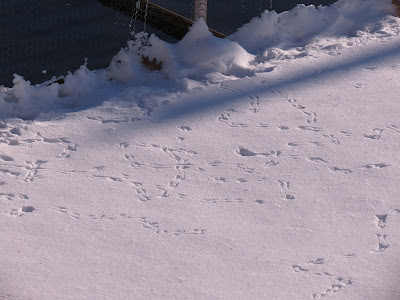 So what species can be expected to show up at these sites? There are too many to list, but I'll give a quick overview.

Next post I'll show some of the spots in my area that I think are particularly worthwhile.

*These are the species I know of (I may have missed one or two): Black-and-white, Orange-crowned, Nashville, Tennessee, Common Yellowthroat, American Redstart, Cape May, Northern Parula, Bay-breasted, Yellow, Palm, Pine, Yellow-rumped, Black-throated Gray, Black-throated Green and Wilson's.
Posted by Reuven Martin at 7:48 PM No comments: