Rondeau is awash with flower colour in spring, and I was happy to find that the same is true in the fall. I had never visited in the fall previously. 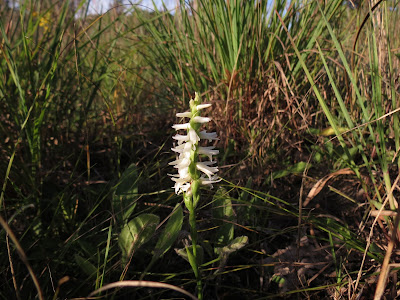 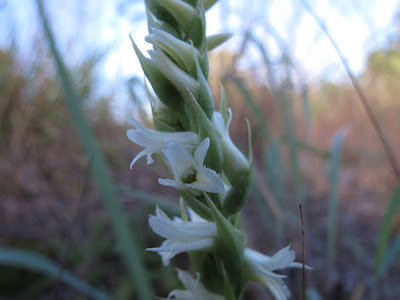 Autumn Coralroot (Corallorhiza odontorhiza is another very local Ontario orchid, and also a very unobtrusive one. I would never have found these plants without help! Most of the stems are less than 10 cm tall! 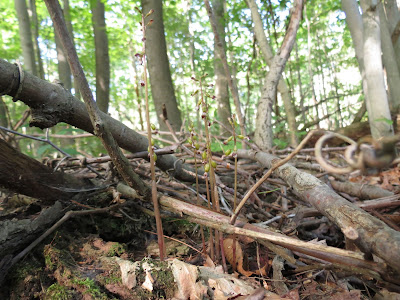 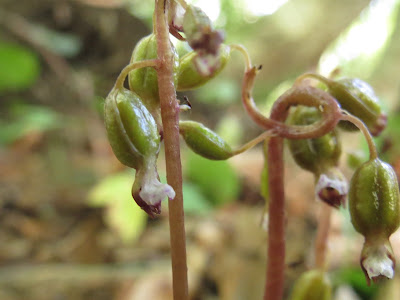 Large patches of Woodland Sunflower (Helianthus divaricatus) brighten up the trails of Rondeau. 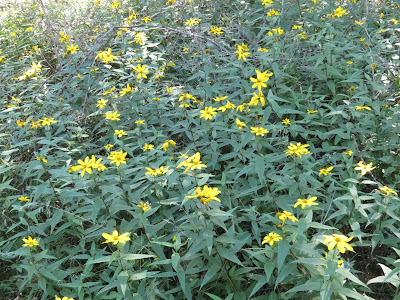 Most Goldenrods are found in sunny open habitats, but some prefer woodland, including two very distinctive species. Zigzag Goldenrod (Solidago flexicaulis) is easily recognized by its broad leaves and zigzagging stem. 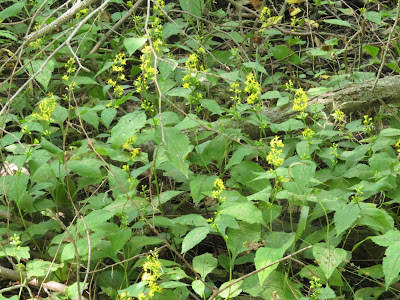 Unlike most goldenrods, most of the flowers of Blue-stemmed (Solidago caesia) grow in the leaf axils. 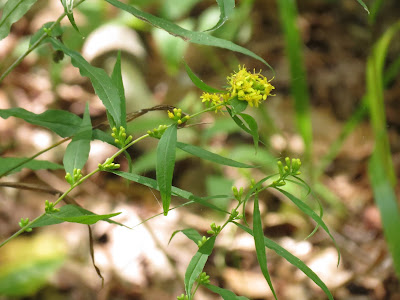 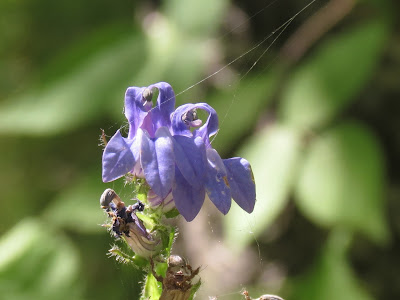 Although it looks like a tropical exotic, Swamp Rose Mallow (Hibiscus moscheutos) is native, and considered a species of special concern by the Ontario government. 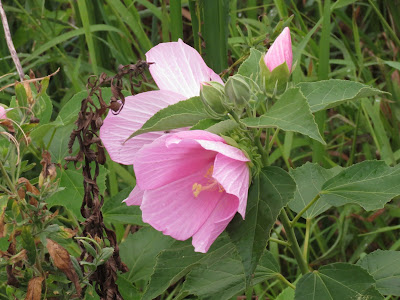 Flowers are not the only attraction when casting your eyes towards the ground. Although ferns don't dominate the forest floor like the often do further north, a variety of interesting species are found at Rondeau.

Christmas Fern (Polystichum acrostichoides) may be named for its evergreen fronds, still bright at Christmas. 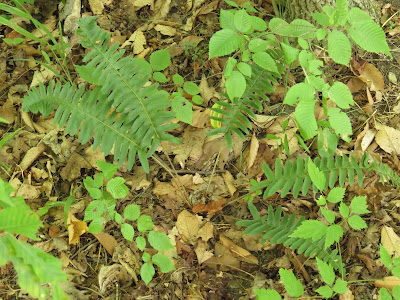 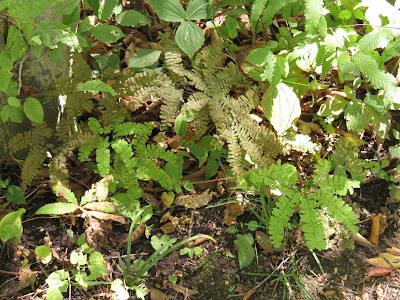 The Broad Beech Fern (Phegopteris hexagonoptera) is considered a species of special concern in Ontario, being found primarily only in Carolinian forests. 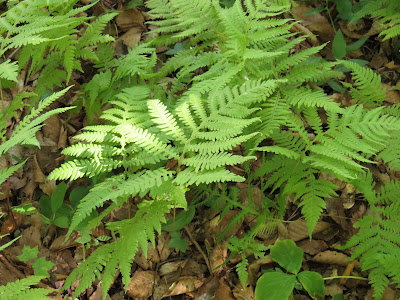 
It's been a while since I've been able to post, and it might be a while again as I'm spending the next three weeks in Northwestern Ontario! I've got a few posts lined up for when I'm gone.

More from my summer at Algonquin eventually, but the next couple posts will be about what I've been doing since I got back. I had a spectacularly successful few days in Southwestern Ontario, mostly at Rondeau. This post will focus on a few of the animal highlights, and the next will have a more botanical focus.

The two biggest highlights of my trip were not photographed, both in the woodlands at Rondeau. On my first day there I flushed a warbler from some brush, and put my binoculars up on a Connecticut Warbler! This species is not only fairly rare but also ridiculously secretive, and I had never set eyes on one before, so getting good looks at this individual was fantastic. The following day, I had a split-second view of what was probably another Connecticut but, typically, I never saw it again.

The second highlight was a long-awaited mammal lifer: Long-tailed Weasel! A pretty large individual popped out of the brush and looked at me for a few seconds. Many predators, and especially weasel relatives, can be easily enticed closer with some high-pitched squeaking, and with this method I managed quite extended looks at this rarely seen animal.

Shorebirds were another highlight of the trip with 19 species overall. The definite highlight was this Buff-breasted Sandpiper at the Blenheim Sewage Lagoons, a lifer for me. Buff-breasted is most often found in upland areas away from water, and this juvenile stuck to the driest parts of the mud. 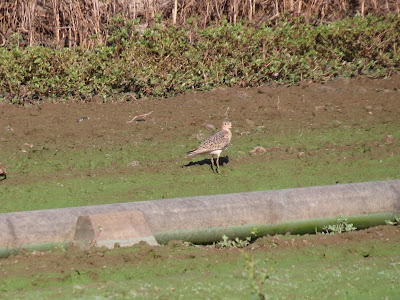 Also at the lagoons was this Willet, dwarfing the other shorebirds present. In all plumages, Willet is most plain grey, but is easily recognised by its long thick bill. 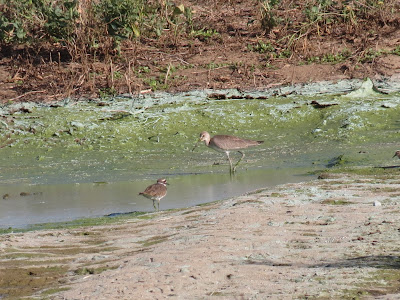 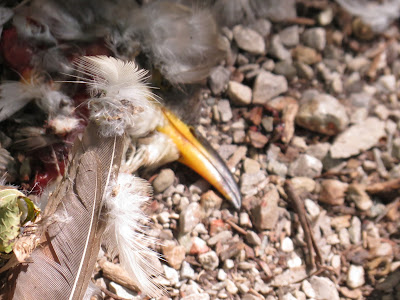 The gorgeous Ailanthus Webworm Moth (Atteva aurea) has greatly expanded its range due to spread of both planted and invasive Ailanthus (Tree of Heaven). 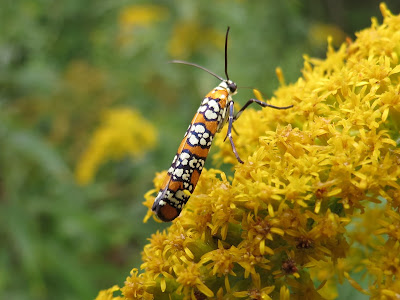 The dragonfly activity along Lake Erie at this time of year is dominated by several species of Meadowhawk as well as the various migratory dragonflies (mostly Green Darner, Black Saddlebags and Twelve-spotted Skimmer). Still, there are a few other resident species that can be found mixed in, such as this female Eastern Pondhawk. Pondhawks often take insect prey as large as themselves. 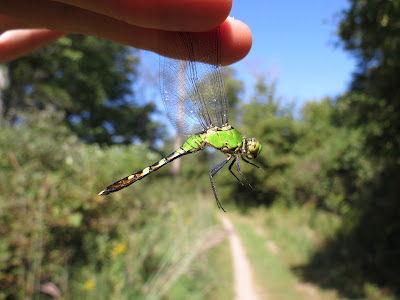 Both Pondhawks and Blue Dashers like this female are abundant earlier in the summer, but linger in only small numbers into mid-September. 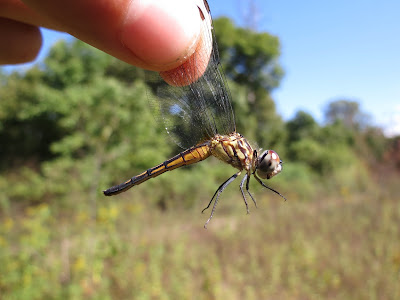 This Assassin Bug was lurking on the railing of one of Rondeau's boardwalks. These insect predators can deliver a nasty bite if handled. 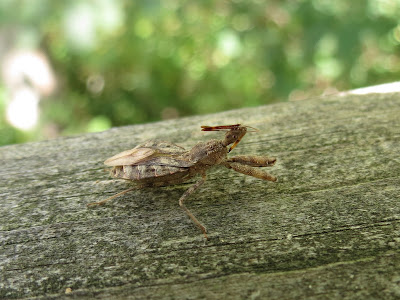 The trip ended on an excellent note, as we watched some 2-300 migrant raptors of nine species moving low along the north shore of Lake Erie in under an hour. There was a period with Sharp-shinned Hawks and Kestrels flying by at a rate of at least one per 10 seconds!
Posted by Reuven Martin at 8:01 PM No comments: